A young woman takes a job as a nanny for an impossibly wealthy family, thinking she’s found her entrée into a better life—only to discover instead she’s walked into a world of deception and dark secrets.

“Wild, unpredictable, and utterly absorbing, Nanny Needed is a gasp-out-loud thriller that will make your head spin.”—Samantha M. Bailey, #1 bestselling author of Woman on the Edge

When Sarah Larsen finds the notice, posted on creamy card stock in her building’s lobby, one glance at the exclusive address tells her she’s found her ticket out of a dead-end job—and life.

At the interview, the job seems like a dream come true: a glamorous penthouse apartment on the Upper West Side of NYC; a salary that adds several zeroes to her current income; the beautiful, worldly mother of her charge, who feels more like a friend than a potential boss. She’s overjoyed when she’s offered the position and signs the NDA without a second thought.

But in retrospect, the notice in her lobby was less an engraved invitation than a waving red flag. For there is something very strange about the Bird family. Why does the beautiful Mrs. Bird never leave the apartment alone? And what happened to the nanny before Sarah? It soon becomes clear that the Birds’ odd behaviors are more than the eccentricities of the wealthy.

But by then it’s too late for Sarah to seek help. After all, discretion is of the utmost importance.

An excerpt from Nanny Needed

The children are chattering. Some sing softly to themselves while others look around the room, lollipops in hand, occasionally glancing at their mothers, who are moving beyond the double French doors.

For a moment, the children look worried: mouths downturned, lollipop licking paused. They’re young, ages three and four, and their bodies stiffen with unease at watching their mothers go. But another woman enters the room smiling, and the children’s faces brighten at the sight of her. She’s beautiful, with diamonds the size of gumballs around her neck, a trail of heavenly perfume about her too.

The children look at her, awestruck, then confused. They’ve never seen her before. Until today, they’ve never had a reason to visit her Upper West Side apartment.

But I know Collette. I work for her, and not for much longer. After today, I won’t be her nanny anymore.

Collette hands them more candy and the children’s smiles widen, cherry-­red flavoring sticking to the corners of their mouths. She points to a display of balloons and they giggle. She tells them about a birthday cake that is soon to come: four layers of vanilla sponge separated by strawberry icing, and the children settle into their seats, their mothers forgotten. For a short time, Collette seems happy too.

But then I see the way she looks at me and it feels as if ice has been dropped down my neck.

Collette wants to keep me.

The children face one another at a table, four girls and two boys plucked from a playground I stumbled upon several days ago. It was one of only a few parks I could find where the mothers would accept an invitation to a birthday party for a child they did not know.

They’d looked at me incredulously at first, asking, Why? Doesn’t the girl have her own friends from school? They wanted to know if I was crazy. They thought it was a joke. But after turning over the invitation cards in their hands, they saw the address and promised to show up promptly at 3:00 p.m. I’m sure the cash I handed them helped too.

For the party, the children are seated in a room usually reserved for elaborate dinner parties, the occasional high-­profile guest. But not today—­those occurrences are fewer and further between these days, and never on July 10.

Today, only children are welcome at West Seventy-­eighth Street.

My eyes tick around the table and I see that the children are fidgeting again. They’re shifting in their seats, asking for cake. The patience of these preschoolers is waning by the millisecond, their shouts and sugar-­high bouncing turning the room into a ticking time bomb.

Collette looks flustered too. She smooths the tablecloth with a snap, her hands trembling, an unmistakable twitch beneath her eye as she steals another glance at the door.

Where is the birthday girl? What’s keeping her?

Collette bursts forward to fill juice cups and adjust centerpieces. When she moves like this—­jittery, sporadic, nerves jangling with caffeine and God knows what else she popped in her mouth before everyone arrived—­she reminds me of a small bird. Thin. Eyes flickering. Body perched before darting away again.

I look at my watch. One hour to go.

The room quiets, overhead lights dim, and out comes the cake. The housekeeper wheels it on a table as the children erupt into cheers, their small hands clapping, and they toss aside their lollipops.

One of the girls counts the candles out loud, “One, two, three, four. Same as me. I’m four years old!”

She looks around. So do the others.

But where is the birthday girl?

Collette glances at the door. I can almost hear her heart racing, the children’s eyes following hers. She rushes to the head of the table, a place setting she’s purposely kept empty, and pulls out a chair. She peers into the light shining from the hallway.

A sharp noise from the next room pierces the air, getting closer. My eyes race to Collette, who looks as if her heart has just been ripped from her chest.

Discretion is of the utmost importance.

“What do you think about me being a nanny?”

I hold up the flyer, the one I grabbed from the bulletin board in our apartment lobby.

Jonathan’s eyes drift toward me. There’s a layer of scruff on his chin from not having shaved yet this morning; his hair is a mess of thick waves across his head. In this light, I’m reminded of how handsome he is: rugged and sincere, the man who will be my husband. He rubs his chin, feeling my gaze landing there. I want to kiss that spot along his jaw, the one with the tiny white scar, and let my fingers trace the side of his face.

“Have you ever been a nanny?” he asks.

“I babysat in high school.”

“And that makes you qualified?”

“I was certified in CPR.”

He teases. “And when was that, ten years ago?”

He plucks the flyer from my hands. “Let me see.” We’re lounging on our bed, which later we’ll fold into a futon to make room in our tiny three-­hundred-­square-­foot apartment. Two pillows are propped behind our backs, our legs stretched out in pajama pants, the coffee Jonathan makes for me every morning resting within arm’s reach on the floor.

He reads over the ad, the four short lines. “What’s with the discretion is of utmost importance part?”

“You mean the most interesting part?” I take back the flyer. “I think it must be a celebrity or someone important. I mean, the address is West Seventy-­eighth.”

“It doesn’t say how many kids. It could be a dozen.”

“Or an infant.” He inhales sharply. “Do you know how to handle babies?”

I think of my childhood: solitary, except for the one aunt who raised me. The ten-­year-­old twins I babysat in high school. Jonathan and I are making plans for our wedding but we’re still a long ways away from having our own children.

“Why do you want another job anyway? I thought you liked it at Hearth.”

I sigh. I do like it at Hearth, the restaurant on the corner of East Thirteenth Street and First Avenue where we work. Jonathan helped me get the job a few months ago despite the fact that we were already engaged and didn’t tell the owner. Paul found out anyway and sat us down for a “serious talk,” warning us about arguing during shifts and said he didn’t want any drama. We told him not to worry. Jonathan and I never argue.

“I’ll work both jobs,” I tell him. “Nanny during the day and keep nights and weekends at the restaurant.”

“That was last week.”

Jonathan throws me a look. “I got in trouble because I didn’t set up my section correctly. He’s one of those three-­strikes-­you’re-­out kind of guys.”

“You’re talking as if you’ve already got the job.”

“Thinking positive, right?” I turn to him. “Anyway, what are you so worried about?”

“Besides the risk of you losing a good restaurant gig—­”

“—­you don’t know anything about this family. What if they’re batshit crazy?”

“At least they’ll pay me for it.” I point again at the address. “Probably pretty well if I had to guess.”

It’s his turn to sigh. “What if the dad comes on to you?”

I choke on my coffee, my hand wiping the dribble at my mouth.

“Come on,” Jonathan says. “You hear about that sort of thing all the time. Rich executive husband coming after the young, beautiful nanny.”

“Aww, you think I’m beautiful?” I bat my eyelashes.

I roll my eyes. “I appreciate the concern, but you’re being a bit overdramatic.”

But Jonathan isn’t cracking an inch.

The author of Nanny Needed, The Stepdaughter, and The Missing Woman, Georgina Cross worked as a journalist and then spent nine years in business development for an aerospace and defense contractor before joining the Huntsville/Madison County Chamber of Commerce as the workforce director. She lives in Alabama with her husband and four sons. 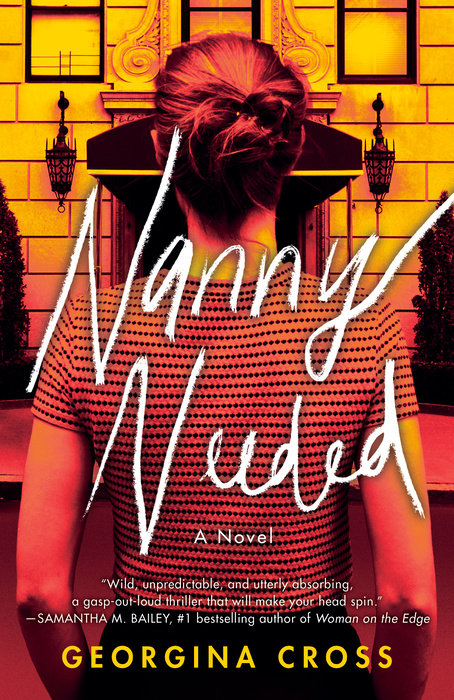