She thought she had put all the questions to rest. But someone from her past wants answers. From the bestselling author of The Rumor and Who Did You Tell? comes The Dare, an electrifying novel of suspense.

“I read The Dare in two big gulps—it’s pacey, has great characters, and there’s a flip worthy of Simone Biles.”—Fiona Barton, New York Times bestselling author of The Widow

At the time it was exciting. A game of dare, but one that had motive and justification. Children can be so judgmental, can’t they? I can still hear her cry as she toppled forward, the dull thud of her body as it landed on the pavement.

Lizzie and Alice are the best of friends, as close as can be. Until the day when they’re out playing by the train tracks and a childish spat triggers Lizzie’s epilepsy. When she comes to, she finds an unimaginable horror: Alice has been killed. Lizzie is devastated, and as she tries to cope with her grief, she is shocked to find herself alienated from Alice’s friends and relatives, who are convinced Lizzie and “the dare” somehow had a role in her friend’s death.

I knew that whatever she wanted me to do, I’d do it. Like that first, dreadful dare.

Years later, Lizzie has tried to move on. She’s engaged to a wonderful man and is starting a new life in London. But someone from her past isn’t willing to forgive and forget. And they’ll do anything to pry answers from her. Even if Lizzie doesn’t know them herself.

An excerpt from The Dare

There are two reasons to celebrate today. First, it’s not raining. It’s been raining for weeks and though Mum says that rain is God’s blessing and we should be grateful for every single drop, even she’s getting fed up with it now. I heard her tell Dad yesterday that God’s blessed us quite enough lately, thank you very much.

The second reason to celebrate is that it’s the first day of the summer holidays, which means six long weeks of NO SCHOOL.

I open my bedroom window and sniff the air. Alice and I have just got to go on “The Walk.” It’s our favorite route and one we’ve done so many times we know each and every landmark: the kissing gate, the gap in the hedge, the little stream with the rickety footbridge, the field with the scarecrow that looks like a dead man on a stick, the line of poplars, the six stiles, and finally, the railway line, where we always wait till we hear the tracks sing, and count the seconds till the train hurtles by.

That’s the best bit, in my opinion. I think it’s Alice’s best bit, too, although we’ve never admitted that. We tell each other that it’s our favorite walk because if we don’t dawdle and we don’t rush, it takes us two hours from my front door and back again. Just the right amount of time to discuss everything that needs to be discussed before our legs start to ache and our stomachs to grumble. But deep down, I think we both know that it’s our favorite walk because of the railway line and the thrill of the open crossing.

I go downstairs and dial Alice’s number on the phone in the kitchen. I’ve only got a bit of credit left on my crappy old mobile. Alice’s sister, Catherine, answers. She doesn’t even say hello, just shouts for Alice in that snotty way she has. She’s a whole nine years older than us so she really should know better. Alice says she’s got “issues.” She’s got something, that’s for sure. Once, she even slapped Alice round the face in front of me. All Alice had done was spray a tiny bit of her sister’s perfume onto my wrist.

Anyway, I’m not going to let Catherine Dawson’s rudeness affect me today. I’m going to put on my Teflon coat, as Mum calls it, the same one I put on at school when Melissa Davenport and the others start having a go.

“Shall we go on The Walk?” Alice says.

The fifth stile is different from all the others. Higher. My foot slides clumsily on the second step and its sharp edge jabs into my calf muscle. Alice pretends not to notice. She never makes fun of me. Not ever. I’m there for Alice when her mum takes to her bed with depression. I’m there for her when she can’t do her French homework or when she has an argument with her sister. And Alice is there for me when I have a seizure, or when Melissa Davenport and Co. fall about, twitching their limbs and rolling their eyes behind my back.

But just as I’m straightening up out of the clumsy squat in which I’ve landed, I see the flicker of a smile on Alice’s lips. A strange little smile that seems to say, “I know something you don’t.” She’s been doing it on and off ever since we set off this morning. She opens her mouth to say something, then bites her bottom lip and looks all worried.

“What? What were you going to say?”

“Oh, nothing really,” she says. Then, after a long pause: “It was just something someone said.”

She blushes, and I can guess straightaway who this someone is. Dave Farley. He must have asked her out. I don’t think I’ll be able to bear it if he has.

Alice presses her lips together.

My heart drums in my throat and neck. “Why are you being so mean? Why won’t you tell me?”

Something horrible happens to my insides when she says that. Best friends shouldn’t have secrets. At least, not from each other. Best friends tell each other everything. Like we always have.

I accuse her of being two-faced—the ultimate insult—and we start screaming at each other. Alice marches off toward the next stile and it’s as much as I can do to keep up with her. We’re arguing the whole time: me hurling insults at Alice’s back, Alice stopping every so often to glare at me over her shoulder and lobbing them straight back. By the time we reach the crossing, we’re running out of horrible things to say to each other.

We’ve had rows before, where one or the other of us has stormed off—usually me, to be honest—but we’ve always made up in the end. Even after the really bad one we had last month. This time seems different. More final.

And that’s when everything starts to shimmer. When the clear blue of the sky and the vivid greens of the grass and trees collide in a messy blur and the only sound in my ears is the vibration of the track. The crescendo of that long metallic note filling my head with unbearable noise.

The next thing I know, I’m sitting in a puddle of wee by the side of the track and a train has stopped. But trains never stop here. It’s the middle of a field.

Then I see one of the sleeves of her denim jacket, caught up in the branches of a bush. Only . . . only it’s not just a sleeve.

Hot bile rushes out of my mouth and everything goes black.

Something in the room has changed. Maybe it’s the news presenter’s tone of voice. That serious one they use when something awful has happened. Or maybe it’s the words themselves that force their way through whatever filters have been working in my head.

My shoulders stiffen. A fatal accident on a railway crossing. A young girl.

Her face flashes up in the corner of the screen before I have a chance to look away. A cheeky little smile. Dimples in her cheeks. She was only eleven. Two years younger than Alice. Her name is Elodie. Was Elodie. Such a pretty name.

I grab the remote control and turn the TV off, but the picture is still there, the words echoing in my head. Except it isn’t the picture I’ve just seen on the screen, the one of the cordoned-off railway crossing, the police cars, the solemn-faced journalist delivering the news. It’s the picture that’s always there, behind my eyes, waiting to catch me off guard, to materialize in front of me and suck me back in.

He scrapes the last of his boiled egg with a teaspoon. “She wouldn’t have known a thing about it. I guess that’s the only consolation for her parents. Even at relatively low speeds, a train has so much mass and energy, the body’s usually destroyed pretty much straightaway.”

I take my empty mug to the kitchen and rinse it out. My chest feels tight, as if my lungs are constricted. I want to ask him if he really believes that, if knowing their daughter has been smashed to pieces pretty much straightaway is a consolation for her parents, but I let the comment pass, unchallenged, because I don’t want to have a conversation about it. Not right now. Not ever.

I try not to think, but it’s impossible. Another life wiped out in seconds. Another bereaved family.

Ross follows me out and gives me a sheepish grin. “Sorry, it’s just the way my brain works.”

What Ross doesn’t realize is that I know exactly what happens to a body when it’s hit by a train. I looked it up once, a long time ago. Couldn’t stop myself. It depends how fast the train is traveling, and whether the body is upright or lying on the ground at the time of impact, but basically all the vital organs are smashed, the major blood vessels broken. Sometimes the body is flung into the air; sometimes it gets rolled up under the wheels and ground into little pieces. Broken bones. Mangled flesh. Severed limbs.

I had to know. I just had to. And then I filed the information away and didn’t access it again. Buried it deep. But it’s always there, ready to infiltrate my conscious mind whenever a train-related tragedy occurs. Especially when children are involved. Especially when it’s a young girl. Like Alice.

Lesley Kara is the author of The Dare, Who Did You Tell?, and The Rumor, both Sunday Times Top 10 bestsellers. An alumna of the Faber Academy “Writing a Novel” course, she lives on the North Essex coast. 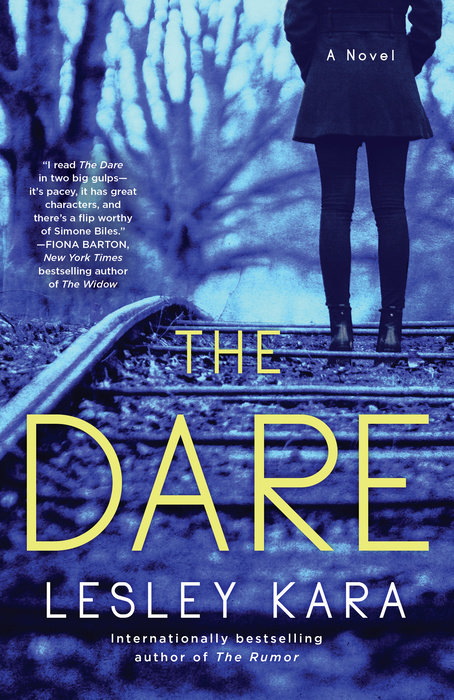