NEW YORK TIMES BESTSELLER • REESE’S BOOK CLUB PICK • A “tender, beautiful and radiantly outraged” (The New York Times Book Review) novel that follows a year of seismic romantic, political, and familial shifts for a teacher and her students at a boarding school for the deaf, from the acclaimed author of Girl at War

“For those who loved the Oscar-winning film CODA, a boarding school for deaf students is the setting for a kaleidoscope of experiences.”—The Washington Post

ONE OF THE BEST BOOKS OF THE YEAR: NPR, The Washington Post, Publishers Weekly, Booklist

True biz? The students at the River Valley School for the Deaf just want to hook up, pass their history finals, and have politicians, doctors, and their parents stop telling them what to do with their bodies. This revelatory novel plunges readers into the halls of a residential school for the deaf, where they’ll meet Charlie, a rebellious transfer student who’s never met another deaf person before; Austin, the school’s golden boy, whose world is rocked when his baby sister is born hearing; and February, the hearing headmistress, a CODA (child of deaf adult(s)) who is fighting to keep her school open and her marriage intact, but might not be able to do both. As a series of crises both personal and political threaten to unravel each of them, Charlie, Austin, and February find their lives inextricable from one another—and changed forever.

This is a story of sign language and lip-reading, disability and civil rights, isolation and injustice, first love and loss, and, above all, great persistence, daring, and joy. Absorbing and assured, idiosyncratic and relatable, this is an unforgettable journey into the Deaf community and a universal celebration of human connection.

An excerpt from True Biz

February Waters was nine years old when she—in the middle of math class, in front of everyone—stabbed herself in the ear with a number two Ticonderoga. Their teacher had been chalking the twelve times tables up on the board, providing February a window in which to sharpen the pencil, the grinding drawing her classmates up from their daydreams, their eyes following her across the room toward the teacher’s corner. February stepped unsteadily on the felted swivel chair, then planted herself in a wide stance on the desk and jammed the pencil deep into her left ear.

The class let out a collective gasp, breaking their teacher from her blackboard reverie. She hoisted February, who was bleeding more than she’d expected, from the desk in a fireman’s carry; February dripped a delicate trail of crimson all the way to the infirmary.

After the nurse removed the graphite and determined the damage was superficial, she gauzed up the bleeding and took February across the hall to the principal’s office, where the secretary produced a suspension form for “violent and disorderly conduct unbecoming of a student.” Then, once it was determined how, exactly, to contact her parents, she was sent home for the week.

Back in 4-B, February’s classmates hailed her as a hero, having sacrificed her very blood to buy them twenty-five minutes of unsupervised bliss. The school, on the other hand, deemed the incident a cry for help, given what the principal had taken to calling February’s “family circumstances.” Really, February explained to her father when he came to get her, she wasn’t upset at all, just tired of listening to the times tables, the buzz of the broken light above her desk, the screech of metal chairs against the floor. He didn’t know what it was like, having to hear things all the time, she told him. And with that he couldn’t argue.

What had pushed February over the edge specifically was Danny Brown calling singsong from the row behind her, “February’s very hairy, and she eats the yellow snow.” Only deaf people would name their daughter February, she’d thought then. Certain months were acceptable for use as girls’ names—April, May, June—and her name was undoubtedly the result of some miscommunication of these guidelines. But February’s parents had always preferred winter, the silent splendor of snow clinging to the chinquapin oaks, and in the Deaf world of her childhood beauty was taken in earnest. Her parents’ friends weren’t concerned with looking corny, and February had never seen any of them say something sarcastic. It was a world she disliked leaving, especially for such hostile territory as the fourth grade.

You can be Deaf on the inside, her mother said that night when she tucked her in. But you can never do that again.

Of course, things are different now, February thinks as she looks out over the quad at the River Valley School for the Deaf, squinting against the early sun. The internet has been world-opening for deaf people, and Deaf culture has evolved to accommodate plenty of mainstream snark and slang. Plus, hearing people are naming their kids all sorts of weird things now—fruits and animals and cardinal directions.

The Deaf world is no longer her safe haven but her place of employment, and at the moment she is screwed. As headmistress, she is supposed to have her finger on the pulse of the school. Instead, she has done the worst thing possible—she has lost other people’s children. Two boys, Austin Workman and Eliot Quinn, a sophomore and a junior, roommates.

In front of Clerc Hall, police have parked a mobile surveillance unit from which they access Homeland Security cameras in Cincinnati and Columbus. They try to tap into the boys’ GPS location, but this only leads them back to the dorms, where three phones are found in a neat stack beneath a common room table. The third phone prompts another round of bed checks, but everyone is accounted for. Eliot’s and Austin’s parents arrive, yelling in a mix of languages at February, at the police, at one another. Superintendent Swall arrives, also yelling, demanding her office keys so he can go inside and write a statement. An emergency alert will be blasted out to every mobile phone in the tri-county. And February will have to speak to the morning news.

She ducks into a lower school bathroom, pins back her hair, and applies lipstick before a very short sink. She wonders if this shirt is okay, then admonishes herself for thinking about her outfit at a time like this.

She returns to the quad and lingers near the police camper. She can already tell it’s going to be an unseasonably warm day for her namesake month—no snow in sight, sunlight refracting off dewy grass. It’s such a nice lawn, meticulously kept Eagleton bluegrass that looks vibrant though it’s not yet spring, a hardy species she chose personally because it would take the picnics and Red Rover games in stride. She has always done her best to make things as pleasant for the students as she can.

She tries to steel herself for the press, to choose words that might tamp down the frenzy, or at least not add any fuel. “Lost” is wrong; she shouldn’t say that—she hasn’t misplaced them. They escaped, more like it, though that makes the school sound like prison. “Runaways” is charged with a certain angst, suggests abuse. Eventually she settles on “gone missing,” the passive obscuring responsibility.

Superintendent Swall emerges and hands February the statement, eight-by-tens of Eliot’s and Austin’s school photos, and a large mug. She stares at the pictures as she downs the coffee—both boys in button-ups looking neat and agreeable, if not exactly smiling. Austin’s eyes are the famous Workman green, a light, almost spearmint color. Eliot’s are so dark they’re almost black, and she tries to meet his gaze instead of letting her own eyes drift down to the scars on his cheek. For a moment she is overwhelmed by the feeling that the boys are staring back, blinks hard to push the thought away. Then she hands her mug to Swall and steps up to the makeshift podium.

When they go live, February holds up the photos first, then puts them down so she can sign and speak her statement simultaneously—a short physical description of each boy, followed by the superintendent’s message: “The River Valley School for the Deaf is working round the clock with the Colson County Sheriff’s Office and doing everything we can to bring our students back safely and as quickly as possible. If you see these children, please call the tip number on your screen.” As she says the final line, her phone vibrates in her pocket. Distracted, she pauses for just a hair too long. The reporters leap in with their barrage of questions, largely unintelligible except for the one closest to her, who says,

Do you have any worries about the welfare of the boys, given the nature of their handicap?

February bristles. Not the time for grandstanding, she knows, but she has to say something.

I’m concerned for the students’ welfare, she says. As I would be for any missing teenager.

But if they can’t hear—

The students are intellectual equals to their hearing peers.

February is taken aback by the unabashed way he demands this information, but tries not to show it.

I’m not authorized to divulge a minor’s medical history on television, sir, she says.

The reporter reddens, but isn’t ready to surrender the limelight:

Any evidence of foul play? Do you anticipate charges of a criminal nature?

He pushes the microphone against her chin and gives her a sympathetic look that rings false around the eyes.

If you’ll excuse me, I have to go speak with the police, she says.

She steps away from the podium, but the reporter’s face will not leave her. He’s right—Eliot and Austin are not as safe as they would be if they were hearing, though not in the way the man had meant it. What if a patrolman finds them and shouts for them to stop, but they keep running? Or if they do need help but have no way to call the police? What if everything ends well and they return unscathed, but Child Protective Services uses the incident as an in to throw their weight around in the cochlear implant debate? She’s read about it happening in other states. February has to bite her lip to cut the panic short—she’s getting ahead of herself again. She checks her phone. The text was from Mel: u ok? She doesn’t know how to respond. She shoves the phone back in her pocket, and looks up to find another parent, Charlie Serrano’s father, leaning against the police RV.

Dr. Waters? he says, his voice much smaller than his frame suggests.

Not now! she wants to scream. Yours is a mess for another day. But she holds it together, says instead:

Mr. Serrano, we’re in a bit of a situation. The campus is closed today, so you can take Charlie on home.

You mean, she’s not here?

Sara Nović holds an MFA from Columbia University, where she studied fiction and literary translation. Her first novel, Girl at War, won the American Library Association’s Alex Award, and was a finalist for the Los Angeles Times Book Prize. She is an instructor of Deaf studies and creative writing, and lives in Philadelphia with her family. 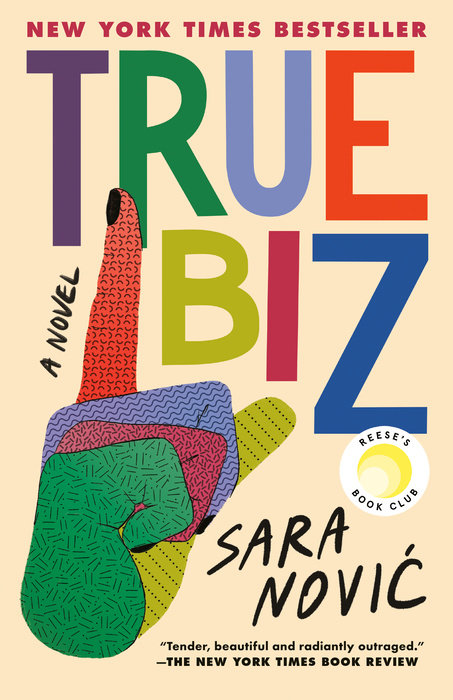