Startling stories that center the bodies, memories, myths, and relationships of Asian American women, in the vein of the electrifying relationships in Killing Eve and Yellowjackets—from the National Book Award “5 Under 35” honoree and author of Bestiary

“Wise, energetic, funny, and wild, Gods of Want displays a boundless imagination anchored by the weight of ancestors and history.”—Kali Fajardo-Anstine, author of Sabrina & Corina and Woman of Light

In “Auntland,” a steady stream of aunts adjust to American life by sneaking surreptitious kisses from women at temple, buying tubs of vanilla ice cream to prepare for citizenship tests, and hatching plans to name their daughters “Dog.” In “The Chorus of Dead Cousins,” ghost-cousins cross space, seas, and skies to haunt their live-cousin, wife to a storm chaser. In “Xífù,” a mother-in-law tortures a wife in increasingly unsuccessful attempts to rid the house of her. In “Mariela,” two girls explore one another’s bodies for the first time in the belly of a plastic shark, while in “Virginia Slims,” a woman from a cigarette ad comes to life. And in “Resident Aliens,” a former slaughterhouse serves as a residence to a series of widows, each harboring her own calamitous secrets.

With each tale, K-Ming Chang gives us her own take on a surrealism that mixes myth and migration, corporeality and ghostliness, queerness and the quotidian. Stunningly told in her feminist fabulist style, these are uncanny stories peeling back greater questions of power and memory.

An excerpt from Gods of Want

K-Ming Chang is a Kundiman fellow, a Lambda Literary Award finalist, and a National Book Foundation 5 Under 35 honoree. She is the author of the novel Bestiary, which was longlisted for the Center for Fiction First Novel Prize, the PEN/Faulkner Award, and the VCU Cabell First Novelist Award. 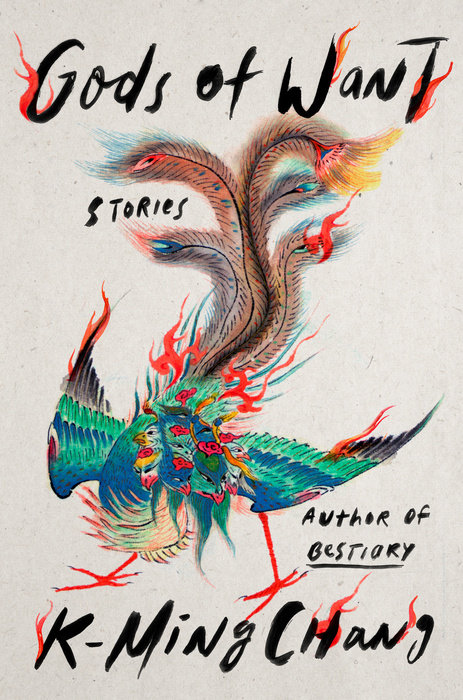