Finn’s search for his memory of one fateful night leads him to Iceland—only to be followed by an unhinged assassin intent on stopping him—in the riveting follow-up to Steel Fear, from the New York Times bestselling writing team Webb & Mann, combat-decorated Navy SEAL Brandon Webb and award-winning author John David Mann.

“One of the best crime novels of the year . . . a brilliant blend of procedural mystery and geopolitical thriller.”—Jeffery Deaver, New York Times bestselling author of Hunting Time

Disgraced Navy SEAL Finn is on the run. A wanted man since he jumped ship from the USS Abraham Lincoln, he’s sought for questioning in connection to war crimes committed in Yemen by a rogue element in his SEAL team. But his memory of that night—as well as the true fate of his mentor and only friend, Lieutenant Kennedy—is a gaping hole.

Finn learns that three members of his team have been quietly redeployed to Iceland, which is a puzzle in itself; the tiny island nation is famous for being one of the most peaceful, crime-free places on the planet.

His mission is simple: track down the three corrupt SEALs and find out what really happened that night in Yemen. But two problems stand in his way. On his first night in town a young woman mysteriously drowns—and a local detective suspects Finn’s involvement. What’s worse, a SEAL-turned-contract-killer with skills equal to Finn’s own has been hired to make sure he never gets the answers he’s looking for. And he’s followed Finn all the way to the icy north.

An excerpt from Cold Fear

A deserted city street. The distant ruckus of drunken revelers, laughter, Christmas carol fragments. Under the faint glow of streetlights a flurry of snowflakes drifts to the frigid cobblestone surface, then swirls aside as a girl sprints past.

She darts through an intersection. Then another. Street names she can’t pronounce. On a wild guess she takes a left at the next corner and runs another block before stopping, bent over, hands on knees, breathing like a trapped animal.

There’s nothing but the silence of the snow and her own rapid panting. She looks around, frantic.

Has she gone too far?

Takes off running again. Squinting at the street signs, pleading for them to make sense. Fighting back the urge to stop and scan the darkness behind her.

The sound of her feet slapping the slick street surface drums against her ears . . . images explode through her mind—the mines . . . the Englishman . . . the lake house—

She pushes them away. Her feet are bleeding, but she has to keep going. She has to—

Was that a glimpse of someone passing on the far side of the street?

She slows long enough to peer back through the murk. No one there.

She spat out the last pill, but the drugs are still too strong. She can’t tell what is hallucination and what is real.

She won’t make it. It was a crazy idea. Should have known it was pointless to try. She reaches the next corner—

And there it is. Spread out before her like a banquet.

She stops again, hands on knees, gasping, the Arctic air searing her lungs. Squints into the dark and feels a rush of bitter relief. Not a hallucination. Really there.

A patch of open water.

The driver told her about this the day she arrived. In December the pond is covered in ice, he said, ice so thick they hold hockey matches on it. Except right here, at this spot. The city keeps this northeast corner heated year-round. “For the ducks!” he chortled.

And sure enough, through the gloom she can see their little bodies, tucked into themselves for warmth, still and silent. Living, breathing ducks, asleep on the water.

How do they survive the winters here?

How does anyone survive the winters here?

She whips her head around, suddenly alert, eyes and ears straining in the dark. There’s no one behind her. The only sounds she hears are her own hard breath and the faint splish-splash as she steps into the shallow.

From her pocket she pulls a stick of lipstick, blood-red.

Stares at it, her heart pounding.

She isn’t supposed to know.

Isn’t supposed to know about any of it.

Hands trembling from the cold, she twists the lipstick open, pulls up her shirt with one hand and with the other scrawls a single word upside-down across her abdomen.

Then lets the lipstick fall from her fingers.

She strips out of her clothes, tossing each item behind her. Stark naked, she takes a few more steps into the water. Another flurry of snowflakes falls around her, the air a blast freezer on her skin. Teeth chattering, she kneels. Places her palms down against the shallow pond floor. Slides down onto her stomach and pushes herself away from the edge with her feet, propelling with her arms, each stroke drawing her further toward the pond’s center. After a moment her outstretched fingers find the lip of the ice sheet.

She slips underneath the ice, then twists around so that her back is to the pond floor, her face to the ice above. Stretches out her arms as wide as she can.

And pushes farther in.

Brandon Webb is the New York Times bestselling author of The Red Circle and Benghazi: The Definitive Report. A former U.S. Navy SEAL whose last assignment was Course Manager for the elite SEAL Sniper Course, he was instrumental in developing new curricula that trained some of the most accomplished snipers of the twenty-first century. Webb has received numerous distinguished service awards, including the Presidential Unit Citation and the Navy Commendation Medal with a “V” for “Valor,” for his platoon’s deployment to Afghanistan following the September 11 attacks. 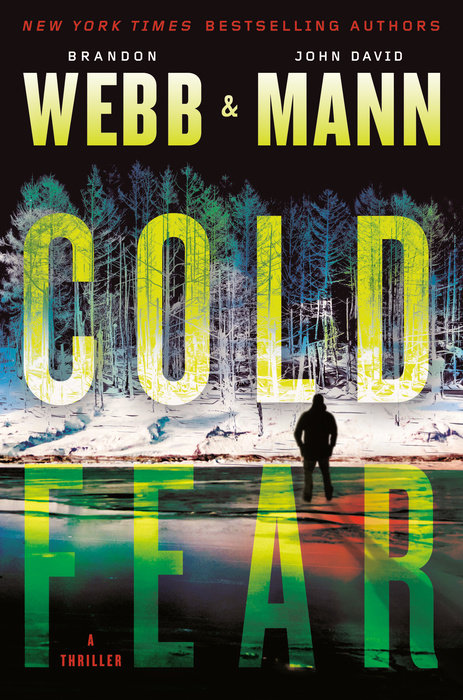