Khalil Sarda went through a rough patch last year, but now he’s nearly back to his old self. All he has to do is keep his “stuff” in the past. Real men don’t have depression and go to therapy—or, at least they don’t admit it. He’s ready to focus on his growing chain of barbershops, take care of his beloved Detroit community, and get back to being the ladies’ man his family and friends tease him for being. It’ll be easy . . . until Vanessa throws him completely off his game.

Vanessa Noble is too busy building a multimillion-dollar tech career as a Black woman before age thirty to be distracted by a relationship. Not to mention, she’s been burned before, still dealing with the lingering hurt of a past breakup. Besides, as her friends often remind her, she’ll never find a man who checks all the boxes on her famous List. Yet when she desperately needs a shape-up and happens upon one of Khalil’s barbershops, the Fade, he makes her reconsider everything. Khalil is charming, intelligent, sexy, and definitely seems like he’d treat a woman right . . . but he’s not Black.

Vanessa may be willing to take a chance on Khalil, but a part of him is frustratingly closed off, just out of her reach. Will old patterns emerge to keep them apart? Or have they both finally found a connection worth throwing away the playbook for?

An excerpt from Getting His Game Back

Maybe he was becoming obsessive.

Khalil shifted in the hard plastic seat. While aesthetically pleasing, it clearly wasn’t made for guys over six feet who wanted their asses not to hurt while they sat in waiting rooms. He squinted, focusing again on the potted plant next to the far window. It had to be fake. He counted the little white flowers again. There were seven. Were there seven last month? He was sure there were seven two weeks ago. Before that, he couldn’t remember. And it was spring, but still that seemed like a lot of flowers for the time of year. Maybe he was making something out of nothing.

The low rumble of his doctor’s voice bounced off the empty seats, rolling over the modern concrete floor.

“Dr. E,” he said, standing to shake his hand and follow him into his office.

“What’s new?” Dr. Edwards asked from his leather armchair, smiling at Khalil as he settled into a much more comfortable seat on the other side of the coffee table.

Khalil took a deep breath, sliding his palms together. This was always the strange part, the transition from wherever his head was in the waiting room, to focusing on what he wanted to talk to Dr. E about. But this was part of his new normal. Talking openly to people he’d met after his breakdown six months ago was a challenge.

“Well. It’s been a good couple of weeks, I think. Work’s been busy, but good.” He slid his phone out of his pocket, opening it to his mood tracking app. “I’ve been on a nice trend lately,” he said, handing it over.

“If you’re being honest, you’ve been on a nice trend the past two months,” said Dr. E after taking a moment to read. “You haven’t had a relapse; you’ve been taking your medication as prescribed. Last time you told me you felt you’d turned a page.” He handed Khalil his phone back.

Dr. Edwards leaned back in his chair, his hands relaxed on his khaki-covered thighs.

“It was a joke, him ribbing me, you know? But he made a good point.”

“It’s been ages since I’ve been interested in a woman. Don’t know the last time it’s been this long.”

It had taken a while, but Khalil was finally comfortable with Dr. Edwards’s nod, his silent response. Khalil caught himself readjusting his watch and the friendship bracelets his niece had made for him. His watchband easily covered the scar, but there wasn’t any harm in being careful. The “Khalil the Player” joke always made him uncomfortable. He knew it came from a good place, from both his twin and his best friend, Darius. And yeah, from the outside looking in, he could admit that it might once have seemed like he fit that description. He loved women; he’d never treat them as disposable. But since he hadn’t been able to keep his sadness in check, and Nia had left him, and things had gone . . . bad, he’d lost interest. Which, now that he was doing better, felt really strange. Though after the past few months he’d had, he wasn’t sure what was supposed to be normal and what was supposed to be strange anymore.

“That I’m noticing, that I’m missing having someone in my life. Maybe it’s a sign that I’m getting back to myself,” he said, shrugging. “I don’t know.”

“And like we’ve talked about, maybe I was hiding. Maybe I was turning to relationships to stay away from feeling sad.”

“How do you feel now?” Dr. Edwards asked.

“Are you having those same feelings? Do you feel you have a reason to hide?”

Khalil hesitated before replying. Enough time to realize he already had the answer in his pocket.

“No. Like you said, my mood’s been great for months.” He rested his forearms on his thighs. “But still, all this, my stuff is here.” He gestured to the space between them. “What woman would want to deal with a man whose emotions get the better of him?”

“Is it possible that you’re getting ahead of yourself? First, I think it’s important to recognize that it’s good you’re interested in meeting someone. Just meeting them. You don’t have to share all of your challenges right away.”

Khalil nodded. Darius and Karim were still in the dark and they were the closest people in his life. No reason to behave differently with someone right off the bat.

“If you cross paths with someone, just exchange a few words. Start small, no expectations,” Dr. E said.

Khalil nodded, keeping his doubts to himself. All his time was spent in his barbershops, and sometimes on basketball courts. It would be tough for him to naturally cross paths with a woman in either place.

“I will see your ‘the darker the berry, the sweeter the juice’ and raise you an ‘aye, mami, how ’bout you try a white papi,’ ” Ana Garcia said, raising her glass to Vanessa Noble. The other women around the high table laughed, taking a sip. Then it was Helen Hsu’s turn.

“Okay, okay,” she said. “I got one. ‘The best thing about you Asian chicks is how docile you are, how servile. You really know how to treat a man.’ ”

“Ewww,” Vanessa said, her skin crawling. “That one definitely deserves another sip.” They lifted their glasses in unison, knocking back a little more wine.

“My turn,” Jill Santos said. “ ‘But where are you really from?’ Oddly enough, when I say Florida, that’s not the right answer for them.”

Time to pull out the big gun, Vanessa thought.

Ana, Helen, and Jill remained silent, eyebrows raised or smiles frozen. Vanessa picked up her glass and took a sip.

“Then what?” asked Jill.

Vanessa shrugged. “That’s it. That was the whole pickup line.”

“Nope. That was it. He just walked up to me, said ‘I like black girls,’ and stood there grinning. Guess that was supposed to make me get naked for him right then.”

“How do we tolerate this?” Helen asked. “It’s a wonder none of us has ever committed a felony.”

“We tolerate it,” Vanessa said, sitting up straight and raising her glass, “because we are some bad-ass women, killing it in STEM and in everyday life.”

“Hear, hear,” Ana said as they clinked glasses. “Now we just have to get through one more day of this conference, without any creepy—”

The women sighed as one, turning to face four dudebros, led by one of the rising stars in renewable energy, Greg Cavana. “Looks like a Benetton ad of Hot Chicks in STEM.” Greg and his friends laughed as the four women looked at one another and knocked back some more wine.

“So, ladies, mind if we join you?” asked Greg, sliding between Vanessa and Ana.

“Actually, we were just leaving,” Helen said, scooting out of the way before one of the guys “accidentally” brushed his arm against hers.

The tallest guy nodded, his gaze over Vanessa’s shoulder at another group of women.

“Come on, Vanessa, let’s kick it for a while.” Greg winked at her.

“Have a good evening, boys,” Vanessa said, linking arms with Jill as they left.

Vanessa and Jill could have walked back to their hotel, but there was a chill in the air, and it was late.

“Am I an ass?” Jill asked, looking out the window of their Lyft.

Clearing her inbox, Vanessa didn’t look up. The update she’d been expecting about the suite of business management software and related apps that her company was designing for Alphastone Technologies in New York had yet to come through. While she knew that her team lead was on top of things, this was a make-or-break project for her reputation. She wanted time to assess the progress during her flight home. But she didn’t want to be rude to Jill.

“What do you mean?” she asked, resting her phone in her lap.

Gia de Cadenet is the author of Getting His Game Back. A Maggie Award finalist, BCALA Literary Award nominee, and lifelong romance reader, she is also a business school professor and former translator and editor for UNESCO. A native Floridian, she currently lives in France with her children. 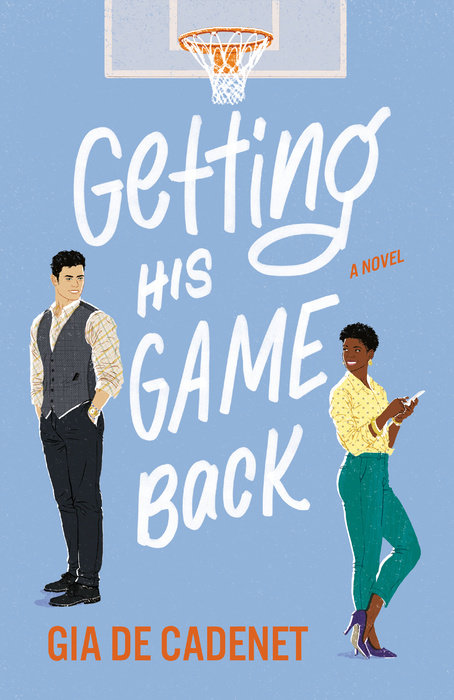