An ambitious chief of staff risks her career and her heart when she falls hard for her new colleague in this steamy workplace romance from the author of Getting His Game Back.

“A sexy and sensitive love story set against a backdrop of political intrigue . . . I loved it!”—Ava Wilder, author of How to Fake It in Hollywood

After nearly a decade of experience in state politics, Isadora Maris is damn good at her job. Aggressive lobbyists and stonewalling senators are no match for her diplomacy and her unflappable commitment to her principles. If all goes according to her meticulous plan, she’ll soon be managing her boss’s successful campaign for U.S. representative and finally land her dream role: congressional aide in Washington, D.C., where she can really make a difference.

But Isadora’s cool professionalism is knocked off-kilter when she meets Karim Sarda. Karim is gorgeous and brilliant and seems to share many of her ideals. So why is he working for the California senate’s most detestable scumbag? Given their bosses’ fierce political rivalry, Isadora finds she can’t risk tarnishing her reputation by flirting with the enemy, and she’s been betrayed enough times to want to keep people at a distance. So she deems Karim off-limits—no matter how flustered she feels whenever he enters the room.

Karim knows that struggle all too well: Still processing the wounds from his failed marriage, he’s ready for a fresh start. But Karim can’t hide his attraction to Isadora’s commanding presence. Her strength is captivating, even as he recognizes something fragile beneath its surface.

When Karim and Isadora succumb to their undeniable chemistry, their initial desire blossoms into something more—something real. But if Karim’s boss takes control of the California senate, everything Isadora worked for could be destroyed. Will workplace politics shatter their chance at love?

An excerpt from Not the Plan

I can do this.

Isadora Maris took a deep breath, squared her shoulders, and maneuvered her luggage into the San Diego airport. Bags checked and through security, she stopped at a coffee shop before heading to her gate. Flying is no big deal. How many times a year do I fly? Nothing bad has ever happened.

She had a few moments, so she took a seat at one of the small tables in front of the shop. Maybe she should buy a magazine. Something light and fun to read? She popped the lid off her cup and tried to ground herself with the aroma and taste of the latte. She was safe, she was fine. Everything’s cool. I’ve got this. If I can handle stonewalling senators and aggressive lobbyists, I can handle a flight.

“Babe, I would totally die for you.” Isadora caught a man’s voice murmuring a table over. She glanced at the couple just as his blond companion let out a kittenish giggle.

“Kenny, sweetie, you are so dramatic,” she said.

Isadora suppressed an eye roll as the couple leaned into each other open-­mouthed. It wasn’t that she was averse to public displays of affection. But how long had it been since someone looked at her like that? Touched her like that? It didn’t matter; right now she had too much on the line. This time next year, her boss, Daniel Etcheverri, would be president pro tempore of the state senate, and as chief of staff, her hard work and drive had helped get him there. From there, she’d manage his (hopefully) successful race for U.S. representative and she’d reach her childhood dream: congressional aide in Washington, D.C.

“You know,” the guy said after smacking his lips, “after last night, the plane could fall out of the sky, crash and burn, and I’d die a happy man.”

Isadora choked on her coffee, a wave of terror charging over her skin from her scalp to the soles of her feet. She wrenched her phone out of her bag, unlocked it, and tapped on an icon on her home screen. She scrolled down to the most important line in the article.

Isadora had to get away from these people. She grabbed her phone and the cup, pushed her chair back, took one step, and promptly collided with something tall and warm. She watched in slow motion as her latte shot out of the cup, arced into the air, and exploded against a white dress shirt.

“Dammit!” came a low, deep voice above her.

“Oh! I’m so sorry.” She grabbed some napkins out of the dispenser on the table, fingertips clumsy and buzzing. When she glanced up at the man’s face, she stopped dead. Green eyes framed by dark hair stared back through nerdy-­cute glasses. He was well over six feet tall, had sun-­kissed olive skin, and was hot. Cover model hot.

“Here.” She offered him the napkins.

“You must be in a hurry,” he said, taking them and dabbing at the coffee.

“Maybe watch where you’re going next time.” Just her luck, the demigod was pissed at her.

“Maybe you should watch where you’re going,” she snapped. “The tables are right there.”

He narrowed his eyes at her, looking her up and down. She wasn’t going to give him a pass to talk to her any kind of way, just because he was gorgeous.

“If you’ll excuse me, miss, I need to go get cleaned up.”

She narrowed her eyes back at him. She’d taken a step away and was stuck between him and the wall of the coffee shop.

Waving the hand holding the napkins out and bowing in a sarcastic display of gallantry, he let her by. “Have a nice day,” he called after her.

She shot him a dirty look over her shoulder and headed to her gate.

Isadora adjusted her earbuds and started her pre-­takeoff ritual. The odds of dying in a plane—­

“Well, isn’t this a surprise?”

She opened her eyes as the demigod’s messenger bag slid onto the seat next to hers. Heat blasted into her cheeks as a bright flash of embarrassment crackled over her already frayed nerves when she realized he’d changed into a moss green shirt.

“Uh . . . yeah,” she mumbled, tugging at the cuff of her cardigan. “Nice shirt.” She snapped her mouth shut. Great. My nerves are making me snarky.

He chuckled, taking his seat. “Thanks. I started the day with a white one, but some crazy lady spilled coffee all over it and I had to change.”

Swallowing over the lump in her throat kept her from clapping back. Why did he have to be so hot? She smoothed her cardigan sleeve, trying to ground herself again. She was going to be next to him for nearly two hours. And you catch more flies with honey than vinegar.

He raised an eyebrow.

“That color works better for you than plain white.”

She nodded, proud of the ability to flirt while strapped in a giant steel tube about to be blasted into the air. The corner of his mouth dipped down, and a hint of red crept up his neck as he leafed through his bag, found a magazine, and tucked it in the seat pouch in front of him.

Is the demigod a little shy? She suppressed a chuckle.

“It’s also a good cut for you,” she said. He slid his bag under the seat. “It fits your shoulders just right.”

Demigod raised both eyebrows and gave her a genuine smile. He had a chiseled jaw. And full, inviting lips. And dimples. Literally, the sexiest man she had ever seen. Her heart dipped as his gaze caressed her cheek and the hollow of her throat.

“Isadora. I am sorry about your shirt.”

“At least let me have it cleaned.”

“Really, it’s no big deal. I already rinsed it in the restroom. I doubt the stain will set.”

“That’s good.” Unsure of what to say next, she returned her earbuds to their place. She didn’t want to be impolite, but it was a habit, part of her method to get into an acceptable mental space before takeoff. The flight attendants were about to start their safety instructions and her ritual included following along. She’d mastered the art of watching disinterestedly with her earbuds in place. Nobody else knew that her music was off, and she was actually hanging on to every word, willing her heart to stop pounding. But now it was going a little fast for a different reason. Her pre-­flight ritual did not include basking in Karim’s cologne. Or . . . what was that smell underneath? Him? Deep, calming breaths let her conceal her investigation.

Oh God . . . he smells amazing! Deep and woodsy and—­something brushed her cheek. She opened the eyes she didn’t know she’d closed. The curved headrest saved her from utter mortification after she’d leaned toward him. She stole a glance with her peripheral vision, hoping he hadn’t noticed. His attention was on the magazine in his lap, but he might have been watching her out of the corner of his eye. Shifting as far over as possible in her seat, she feigned interest in the view out the window while listening to the flight attendants explain what to do if they were facing imminent demise.

She needed to focus on something else. She undid the low bun she always wore for flights. Running her fingers through her blown-­out hair, she twisted it back into place, then ended up knocking an earbud loose. Karim was unwrapping a piece of gum and offered her one.

“I hate having to pop my ears later,” he said.

“Thanks. I hate that too.” She focused on the explosion of gooey mint across her tongue as the engines roared. His eyes were shut, so she didn’t have to hide the fight to slow her breathing as the plane left the ground. She chewed and chewed and chewed, trying to get back to a calm place. The grating whine of the wheels coming up into the body of the aircraft sent a flash of thick moisture over her skin and she had to send her mind in a different direction.

“I don’t understand your priorities,” her mother had sighed on the phone the previous night. “Things haven’t been easy for me.”

The same call, the same words, the same guilt, every time.

Gia de Cadenet is the author of Getting His Game Back. A Maggie Award finalist, BCALA Literary Award nominee, and lifelong romance reader, she is also a business school professor and former translator and editor for UNESCO. A native Floridian, she currently lives in France with her children. 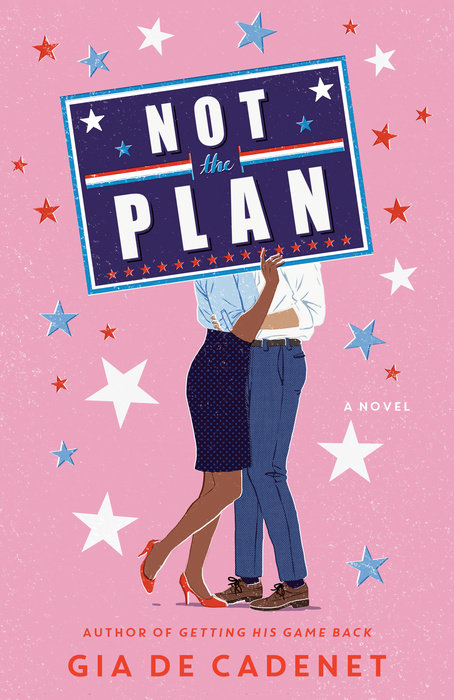