The compelling story of how Vincent van Gogh developed his audacious, iconic style by immersing himself in the work of others, featuring hundreds of paintings by Van Gogh as well as the artists who inspired him—from the New York Times bestselling co-author of Van Gogh: The Life

Vincent van Gogh’s paintings look utterly unique—his vivid palette and boldly interpretive portraits are unmistakably his. Yet however revolutionary his style may have been, it was actually built on a strong foundation of paintings by other artists, both his contemporaries and those who came before him.

Now, drawing on Van Gogh’s own thoughtful and often profound comments about the painters he venerated, Steven Naifeh gives a gripping account of the artist’s deep engagement with their work. We see Van Gogh’s gradual discovery of the subjects he would make famous, from wheat fields to sunflowers. We watch him experimenting with the loose brushwork and bright colors used by Édouard Manet, studying the Pointillist dots used by Georges Seurat, and emulating the powerful depictions of the peasant farmers painted by Jean-François Millet, all vividly illustrated in nearly three hundred full-color images of works by Van Gogh and a variety of other major artists, including Claude Monet, Paul Gauguin, and Henri de Toulouse-Lautrec, positioned side by side.

Thanks to the vast correspondence from Van Gogh to his beloved brother, Theo, Naifeh, a Pulitzer Prize winner, is able to reconstruct Van Gogh’s artistic world from within. Observed in eloquent prose that is as compelling as it is authoritative, Van Gogh and the Artists He Loved enables us to share the artist’s journey as he created his own daring, influential, and widely beloved body of work.

An excerpt from Van Gogh and the Artists He Loved

No one needed the balm of religion more than Vincent van Gogh.

From childhood, he fixed on the image of Christ as both sorrowing and the comforter of sorrows. This was the image enshrined forever in his imagination by an engraving of Ary Scheffer’s Christus Consolator that hung in his father’s parsonage throughout his childhood—as far as we know, the first work of art to enter his consciousness. Illustrating a passage from the Bible (“I have come to heal those who are of a broken heart”), it became one of the favorite religious images of a nineteenth century fixated on images of innocent suffering: A radiant but sad Christ sits surrounded by supplicants prostrated by pain, oppression, and despair. He opens his hand to reveal the wounds he received on the cross, a reminder of his own suffering. The message was clear: Suffering brings one closer to God. “Sadness does no harm,” wrote Van Gogh’s father, the pastor Theodorus, “but makes us see things with a holier eye.”

In many of the rooms that Van Gogh rented throughout his early life, he hung religious illustrations on almost every wall, image after image, mostly of Jesus, until “the whole room was decorated with biblical images and ecce homos,” a co-worker named Paulus Görlitz recalled many years later. On almost every image Van Gogh wrote the same inscription from 2 Corinthians: “Sorrowful, yet always rejoicing.” At Easter, he surrounded every print of Christ with palm branches. “I was not a pious person,” said Görlitz, who roomed with Van Gogh when they worked together as booksellers in Dordrecht in 1877, “but I was moved when I observed his piety.” Görlitz remembered Van Gogh’s telling him, “The Bible is my solace, my support in life. It is the most beautiful book I know.”

That same year, at the age of twenty-four, Van Gogh moved to Amsterdam, where he set out to become a Dutch Protestant pastor like his father, whom the family called Dorus. It was an arduous career choice. Before he could begin any theological studies, he first had to be admitted to a university, and that required years of academic training, including studies in Greek and Latin. Van Gogh was determined to do it in record time. “May God grant me the necessary wisdom to end my studies as early as possible,” he wrote with impatience, “so that I can perform the duties of a clergyman.” The subject of religion was not included in his preparations for the university entrance exam, but he could not resist it for long. Soon he was studying the Bible straight through yet again, somehow finding time in his busy language studies to make long lists of parables and miracles and arranging them in chronological order, in English and French as well as Dutch. “After all,” he explained to Theo, “it is the Bible that is essential.”

Van Gogh meanwhile pursued his language studies with an intensity that exceeded even his usual fervor for new endeavors, applying himself “with the tenacity of a dog that gnaws a bone,” as he put it. But there were signs of trouble right from the start. The work did not yield readily to Van Gogh’s ardor. “It does not come to me so easily and quickly as I could wish,” he admitted to Theo, praying for a lightning bolt to restore his conviction.

It did not take long for inspiration to strike. During the pivotal summer of 1877, Van Gogh heard a sermon by a Dutch Reformed minister named Eliza Laurillard on the parable of the sower, and it showed him how he might combine the great consuming passion of his life—family reconciliation through religion—and the great consoling preoccupation of his life: art. “Jesus walked in the newly sown field,” Laurillard began. Using simple, vivid imagery he portrayed a Christ not only embodied in nature, but also intimately connected with the processes of nature (plowing, sowing, reaping), and inseparable from the beauty of the natural world. Other preachers, including Van Gogh’s father, had declared the “divineness of Nature.” But Laurillard went further. Finding beauty in nature was not just one way of knowing God, he proposed—it was the only way. And those who could see that beauty and express it—writers, musicians, artists—were God’s truest intermediaries.

This was an electrifying new ideal of art and artists. Before, art had always served religion: from the ubiquitous emblem books that taught children moral lessons, to the devotional prints that hung in every one of Van Gogh’s rooms. But Laurillard preached a “religion of beauty” in which God is nature, nature is beauty, art is worship, and artists are preachers. In short, art is religion. “He made a deep impression on me,” Van Gogh wrote, as he returned again and again to hear Laurillard preach. “It is as if he paints, and his work is at the same time high and noble art.”

But Laurillard’s ideas on art and religion were not enough to propel Van Gogh into the ministry—ultimately, his titanic efforts to follow in his father’s footsteps would fall far short. He failed to get through the rigorous academic training required of a Dutch Protestant minister in the nineteenth century; he failed to establish himself as a religious missionary in the desolate mining country of southern Belgium; he failed even to keep a job as a colporteur—a lowly dispenser of free Bibles. And, as it would throughout his life, his failure to measure up to his family’s expectations would cause him to reject his family’s faith.

In 1881, Van Gogh asked his widowed cousin Kee Vos to marry him. This precipitated a huge conflagration with his parents, who sympathized with their grief-stricken niece’s horror at the idea of becoming entangled with their deeply troubled son. So Vincent struck back in the most powerful way he could: by denouncing religion. Religion would “ring hollow,” he declared to Theo, “if one had to hide one’s love and were not allowed to follow the dictates of one’s heart.” If religion required a repudiation of the heart, then he would sooner repudiate religion. “I really don’t care for all that twaddle about good and evil, morality and immorality,” Vincent wrote to Theo in the aftermath of the thwarted marriage proposal.

As the decade wore on, Van Gogh would veer further and further away from traditional religion, first personally and then artistically. His antagonism toward it would reach its height in 1888, at the same time that his friend Émile Bernard began to introduce Catholic imagery into his art. Fired by the Symbolist debates in Paris, Bernard arrived in the art community of Pont-Aven on the coast of Brittany in April of that year with a portfolio of mystic religious images in one hand and a Bible in the other. Paul Gauguin, the leader of the Pont-Aven artists, received the new ideas openly, and soon both men were busily planning works to plumb the Good Book’s deep well of mystery and meaning.

After such a warm reception from Gauguin, Bernard must have been shocked by the storm of protest that greeted his ideas in faraway Arles, where Van Gogh now lived. “How small-minded the old story really is!” Van Gogh wrote to Bernard. He railed against “that deeply saddening Bible, which arouses our despair and indignation, which seriously offends us and thoroughly confuses us with its pettiness and infectious foolishness.” Only the figure of Christ survived Van Gogh’s wrath. But he belittled Bernard’s ambition to capture Christ’s image as “artistic neurosis” and ridiculed his chances of succeeding. “Only Delacroix and Rembrandt have painted the face of Christ in such a way that I can feel him,” he scoffed. “The rest rather make me laugh.”

Van Gogh continued to inoculate himself against the world of spirits and superstitions that surrounded him, even undertaking, in July 1888, to reread the complete works of the religious skeptic Honoré de Balzac. But the influence of the artists he respected was too strong, the obsession from the past too deep and unsettled, to resist for long. In September, in a moment of deep despair, Van Gogh turned to the most consoling image he knew: Christ in the Garden. Van Gogh tried painting the image twice, but scraped away the paint both times. Late that same month, he tried again to capture this vision of immortality in paint. “I have the thing in my head,” he wrote, “a starry night; the figure of Christ in blue, all the strongest blues, and the angel blended citron-yellow.” But yet again he failed. Crushed a second time by the weight of an image too heavily freighted with the past—“too beautiful to dare to paint”—Van Gogh took a knife and “mercilessly destroyed” the canvas.

Steven Naifeh is a graduate of Harvard Law School. Mr. Naifeh, who has written for art periodicals and has lectured at numerous museums including the National Gallery of Art, studied art history at Princeton and did his graduate work at the Fogg Art Museum of Harvard University. He has written many books on art and other subjects, including four New York Times bestsellers. His biography Jackson Pollock: An American Saga won the Pulitzer Prize and was a finalist for the National Book Award. It also inspired the Academy Award–winning 2000 film Pollock, starring Ed Harris and Marcia Gay Harden, as well as John Updike’s novel, Seek My Face. 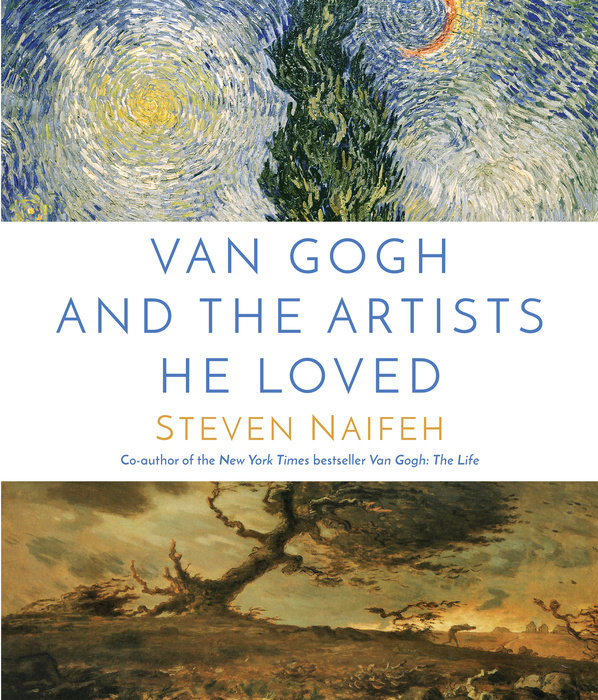