A candid, witty, and inspiring collection of essays from The Bachelor’s first Black Bachelorette, exploring everything from relationships and love to politics and race

“The Bachelor gave me an opportunity, but I created my own happy ending.”

Rachel Lindsay rose to prominence as The Bachelor’s first Black Bachelorette and has since become one of the franchise’s most well-known figures—and outspoken critics. But there has always been more to Lindsay than meets the eye, and in this book, she finally tells her own story, in her own words.

In wide-ranging essays, Lindsay opens up about her experience on ABC’s hit show and reveals everything about her life off-camera, from a childhood growing up in Dallas, Texas, as the daughter of a U.S. District Judge, to her disastrous dating life prior to appearing on The Bachelor, to her career in law, and the decision to become a reality-TV contestant. She also brings a sharp wit and keen intellect to weigh in on issues such as the lack of diversity in reality television and the importance of political engagement, protest, and the Black Lives Matter movement.

Told in the down-to-earth, no-nonsense voice she’s become known for, Lindsay’s book of essays provides an intimate look at the life of one of reality TV’s most beloved stars, as well as advice and inspiration that will make her a role model for anyone who has ever struggled to find their way in love and life. As she says, “Contrary to popular belief, the best gift I ever received was not a wedding ring. It was the permission I gave myself to be imperfect.” And if you don’t believe her, you know the saying: Miss me with that.

An excerpt from Miss Me with That

This Is Not a Fairy Tale

On August 7, 2017, more than seven million people watched me accept a marriage proposal on The Bachelorette. They tuned in every Monday night for nine weeks to witness the very emotional process of my meeting, getting to know, and ultimately sending home thirty men. After watching genuine connections, tense conflicts, and heartbreaking farewells, fans think they know me.

When you watched me on TV, you might have seen someone who had it all together—­an intelligent and mature woman who was secure within herself, knew what she wanted, and refused to suffer anyone whose own agenda got in the way. Privileged upbringing, attorney-­at-­law, and actually married to the man I chose on the show? It can be easy to think that my life is a fairy tale.

But my journey to love began long before those eleven episodes. To truly understand the desires, motives, and reasons behind the decisions I made on The Bachelorette, you have to know my story before I ever followed that whim to audition for a show I’d never watched. My biggest hope is that when you finish reading Miss Me with That, you’ll realize that I’m not so different from you. I don’t have it all together. In fact, right before I signed on to be a contestant on The Bachelor . . . Girl, I was the epitome of untogether. So much so that had the man I wanted to marry at the time asked me not to do the show, I would have passed on the opportunity (and probably be living that mediocre life my critics love to keep threatening me with). But I appreciate how much you wanted me to win, and I want to reciprocate the love by sharing the journey behind the journey so you can win, too. I want you to know me at my worst so you can learn from my experiences and realize that no matter how complicated you might be, you can have the life you dream for yourself. You absolutely deserve it.

Note to The Bachelor fans: Let me warn you that this is not your typical Bachelor book. When I share anything about the show that I haven’t disclosed before (and we can all agree I have had tons to say), my intention isn’t to spill the tea. C’mon, you already know that I’m going to be honest about what I think and feel about the franchise. Just understand that my intention is not to gossip about or hurt your favorites. If anything, I expose no one more than myself. I make a genuine effort to own my mistakes and regrets as readily as I express my concerns and resentments. I wrote this book with an open heart and I hope you read it with an open mind.

Miss Me with That is about how I went from pursuing a life of other people’s design to becoming clear about what I wanted for myself and finding the courage to pursue my authentic desires. I wrote it to share the experiences and work it took to become the woman you see on TV or might hear on a podcast. Not to pre­sent myself as some paragon of success, because I assure you that I remain a work in progress. If anything, as you read, I want you to think, “Damn, Rachel was a hot mess, but at least she was always willing to clean her shit up.”

I chose the title Miss Me with That because it’s a phrase I’ve been prone to say on the two podcasts I cohosted after appearing on The Bachelor and The Bachelorette—­Bachelor Happy Hour with fellow alum Becca Kufrin and Higher Learning, where Van Lathan and I discuss the latest in hot topics, politics, current affairs, and sports, and how they impact Black culture. Whether a gentle pushback or a forceful argument, saying “Miss me with that” is my way of calling bullshit. In other words, I use it a lot. Especially about serious topics like justice and equality and to my haters (and I’ve got plenty for you, too, since I know you’re here, too).

Contrary to popular belief, the best gift I ever received was not a wedding ring. It was the permission I gave myself to be imperfect and grow from some less-­than-­flattering experiences. If you think that my transparency can be of service to you in any way, turn the page. If not, you know the saying . . . you can miss me with that.

Age 18: Graduate from First Baptist Academy and move from Dallas, Texas, to New York City to attend New York University. (Who needs a gap year?) While in college, meet my future husband—­an Omega football player. (Refer to the list on page 50 for other qualifications.)

Age 22: Graduate from New York University with a BA in political science. Then promptly move to Southern California and begin law school. First choice is Loyola Marymount, but Pepperdine or UCLA would be great, too.

Age 25: Graduate from law school with a specialization in sports and entertainment law. Then start my career as a sports agent at CAA, WME, or IMG.

Age 26: Get engaged to my future husband. (Even though I know the proposal is coming, he still manages to surprise me.)

Age 27: Get married. (This age gives me the perfect amount of time to spend two years with my husband traveling the world before we have any kids.) The idea of walking down the church aisle in a white dress with all eyes on me and then pouring my heart out at the altar is mortifying. We’re eloping. Just immediate family at the courthouse followed by a huge reunion-­style celebration.

Age 29: Give birth to the first of four children. Two is not enough. As the second of three, I want to spare my child that middle child syndrome, so four it is. Maybe more.

I recently learned that I came into this world fighting for my life. Literally.

I was in Houston visiting my mom’s side of the family . . . ­grandmother, aunts, uncles, and cousins. We typically gather around my grandmother’s kitchen table with my family for hours to talk, laugh, and gossip. We were talking about my unusual life path when my Aunt Jetta shared that she knew I was destined for greatness because of how I came into this world. “You know you almost didn’t make it, right?” she said.

“I’m sorry, what?” My aunt explained that when my mother was twelve weeks pregnant with me, she stood as a bridesmaid in a friend’s wedding. From the congregation, my grandmother watched as my mother slumped over the piano. Mom fainted and later discovered that she was spotting. She almost lost me, and the doctor insisted she remain bedridden until she had me. Having never heard this, I looked at my mother. “Mom?”

She shrugged. “I thought I told you that story.”

Meet the Lindsays. We’re reluctant to share information. Even family business that pertains to you. (The Lindsay group chat is probably ablaze right now since we’re not even two chapters in, and I’ve already shared too much.)

Learning about the circumstances surrounding my birth made me realize that we rarely question how we came into this world, what a delicate process coming to life is, how easily things can go wrong. The story rocked me, making me consider my life and its purpose from a different angle. I almost never existed, but I did, which means I’m here for a reason.

Rachel Lindsay is an attorney, media personality, author, speaker, and podcaster. Rachel Lindsay is the author of Miss Me With That, an on-air correspondent with Extra and co-host's The Ringer’s Higher Learning with Van Lathan and Rachel Lindsay podcast highlighting Black culture, and is the host of The Ringer’s Morally Corrupt Show. Rachel is known for making history as the first Black lead in the franchise’s history on the thirteenth season of ABC's The Bachelorette, and as a contestant on the twenty-first season of ABC’s The Bachelor.
Rachel obtained an undergraduate degree at The University of Texas at Austin in sports management, then went on to receive a law degree from Marquette University Law School in Milwaukee with a concentration in sports law.
Rachel is a member of Delta Sigma Theta Sorority, Inc., a member of the Advisory Council for the University of Texas at Austin College of Education, an ambassador for the College Football Playoff Foundation, and a supporter of Paw Works and Project Angel Food.
Rachel is an avid sports fan, enjoys music, meditation, dancing, exercising, reading, and spending time with her family, her dog Copper and husband Bryan. She currently resides in Los Angeles. 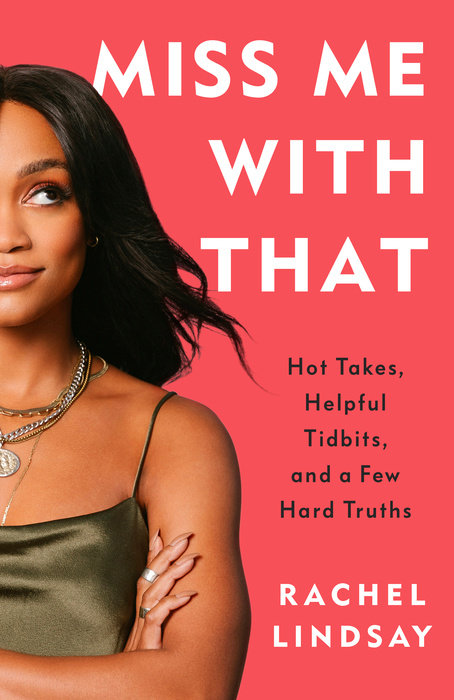