Detective Chief Inspector Jonah Sheens is on the trail in this “riveting” (Publishers Weekly) crime novel from the acclaimed author of She Lies in Wait, Watching from the Dark, and Lie Beside Me

Jonah Sheens is enjoying a moment of peace in a pub garden on his day off when a teenage girl wanders out of the woods. She’s striking, with flame-red hair and a pale complexion. She’s also covered in blood.

When Jonah races to help, the girl insists she’s fine. Then she smiles. It’s her sister he needs to worry about. Keely and her sister, Nina, disappeared from a children’s home a week ago. Now Keely is here—but Nina’s still missing. Jonah is sure Keely knows where her sister is—but before she tells him anything, she insists, he has to listen to her story from the beginning.

Is she witness, victim, or killer? And if Jonah follows the trail of clues in her story, will they lead him to the missing girl—or distract him until it’s too late?

An excerpt from Little Sister

Juliette Hanson was already in the station when the DCI called. She felt caught out, being found there late on a sunny Sunday afternoon. The chief knew perfectly well that there were no pressing cases on their books. Nothing that required overtime.

“Oh, that’s useful” was all he said, but she thought she could hear the slight surprise. The unspoken question about her personal life.

“I need you on something.” There was the brief sound of a passing car, and Hanson wondered where he was. “I want to know if there’s a missing persons report on a Keely Lennox, and her sister, Nina. Lennox with two n’s.” Hanson scribbled it down on the big pad on her desk. “I’ll be there in about half an hour, once the uniforms come to assist.”

Hanson paused, her pen in the air. “Assist with what?”

“With the older sister,” he said quietly. “I’m bringing her to the station. I’ll explain once I’m on my own in the car.”

Hanson felt a fizz of keen curiosity as she rang off. Detective Chief Inspector Sheens rarely came in on Sundays, and it hadn’t happened at all since his daughter had been born.

She opened the database and typed in the name “Keely Lennox.” She was immediately rewarded with a missing persons report, filed on Wednesday morning. Clicking on it showed her two redheaded teenagers, one smiling at the camera, her green-­blue eyes warm, and the other, older-looking one, giving it an ice-­blue, dead-­eyed stare.

There were a couple of brief paragraphs of information below, stating that sixteen-­year-­old Keely Lennox had absconded from a children’s home with her younger sister, fourteen-­year-­old Nina. They’d last been seen at bedtime on Tuesday night. Almost five days ago.

There was little else beyond that information and a description. No particular concerns were registered over either of the sisters. Which, she thought glumly, was probably because they were in care.

So the chief has Keely, Hanson thought. What about the little sister?

As they lived in Southampton, the misper investigation was being handled by one of Yvonne Heerden’s uniformed constables. Hanson decided to put a call through to Heerden’s team on the second floor. There should be someone around who could tell her what they’d found out so far. After fourteen months as a detective constable, Hanson knew the drill well enough to get moving without the chief.

As she waited for someone to pick up, she dragged her holdall out from under the desk. She was wearing sports gear, her blond hair tied back in a sweat-­flattened ponytail. If she ended up interviewing anyone, she was going to need her backup clothes, which she kept stashed under here for emergency use.

“Alan Jones,” said a voice on the other end. Hanson managed to drag a shirt and jacket out of her bag while straightening up. They were both a little crumpled, but they were clean.

“This is DC Hanson,” she told him. “My DCI needs some info on a missing persons from last week. Keely and Nina Lennox, on Wednesday the third. The report was filed by a Constable Alsana Meek.”

“OK, hold on,” he said, and she could hear him typing in the background. “I’ve got the investigation itself here. I’ll send it over, but if you want a quick summary, I can give it to you.”

“Great,” Hanson said. “I’d like to check what’s been done. Were their phones tracked?”

“Yes, on Thursday the fourth of September,” Alan told her, after a pause. “They’d most recently pinged a cell tower not far from the children’s home in Southampton, on the Tuesday night, but nothing since.”

“Did they check again later?” she asked.

Hanson wrote that down with a feeling of slight frustration. It was an unfortunate and inescapable fact that, with stretched resources, a lot of cases simply didn’t get the time spent on them that they should. It was a situation that was only worsening as cuts to mental health and social care services left officers dealing with people who really needed other forms of help but couldn’t get it.

But even allowing for that, she was disappointed to learn that two probably vulnerable missing girls hadn’t been more thoroughly searched for. Particularly when their phones being switched off might be evidence of something more sinister than a desire not to be found.

“Anything useful from the children’s home staff?”

Another pause, and Alan said, “They interviewed the manager there, who didn’t have any ideas.” There was a momentary silence, and then he said, “She expressed concern for their safety, particularly for the younger sister, Nina.”

“Did she say why?” Hanson asked.

“Er . . . she said Nina is very impressionable, and would do anything Keely suggested,” the officer said, his tone flat.

She thanked him and rang off, curiosity mingling with a slight feeling of unease. The chief was worried enough about Nina to bring her sister in, which implied that the children’s home manager might have been right.

She wondered whether she should message Ben and Domnall. The DCI hadn’t given her any instructions about that. Presumably because it wasn’t clear to him yet whether the whole team would need to come in.

There was no point disturbing either of the team’s sergeants on a Sunday afternoon without any real cause. It would be needlessly disruptive, particularly as Ben would inevitably come in the moment she told him about it. The effect of being naturally conscientious.

But she was also in the habit of messaging Ben fairly frequently. It seemed strange not to let him know that something was going on. And sometimes, she thought, it was better to have a heads-­up about situations. If she phrased it in the right way, she’d keep him in the loop without making him feel his presence was required.

After a little thought, she sent him a brief text.

How goes? I’m still in CID and the chief’s on his way, too. Interviewing a teenager with a missing sister. Could be interesting. I’ll keep you posted.

I’ll be there in twenty. I’ve got muffins.

Hanson was grinning as she dialed the number for Keely Lennox’s children’s home. Clearly that hadn’t quite been the right phrasing.

Michelle had arrived at the Spreading Oak not long after the two uniformed constables. And just for a moment, as she climbed out of the car, Jonah had felt a drop of disappointment that it wasn’t Jojo coming to find him. That it was Michelle, the smart, capable mother of his child, and not strong, irreverent, outdoorsy Jojo Magos whom he was now with.

The reaction had made him feel wretched.

You shouldn’t be thinking about Jojo. It’s not fair. You love Michelle.

Which was true. He loved her, and he loved Milly. And he’d done the right thing. Of course he had. Jonah had taken a deep, steadying breath, and then had waved to Michelle, gesturing at her to stay put while he helped the girl into the car.

He’d seen the expression on Michelle’s face at the sight of the squad car. She had known, immediately, that their weekend together was over. Jonah had expected her to look irritated. Pissed off that their family time was being bulldozed. But she had looked, instead, slightly panicked. He had seen her glance at the sleeping Milly and away, as though this was too much, and it had both worried him and made his thoughts of Jojo seem inexcusable.

He was still thinking of that expression as he looked in on Keely from the observation room half an hour later. The constables had shown her into one of the regular interview suites, where she was now waiting for the arrival of the on-­call social worker to be her appropriate adult.

The impression he’d gathered from Keely was that she wasn’t quite normal. While they stood waiting at the pub, he’d tried to get her to talk to him further. He’d asked her about what had happened and about where she’d come from. About whether she’d eaten, and whether there were parents he could call. She had been totally unmoved by these questions and had returned them with either a flat stare or one with a trace of amusement. In the end, she’d given a slight sigh and said, “I’ll talk to you at the station. There’s no point asking anything now.”

It had been said with incredible coolness. He found it hard to believe, now it was confirmed, that she was only sixteen. He didn’t, in fairness, find it particularly easy to guess the ages of teenagers in general. He had no points of reference as yet. But even allowing for that, it was unsettling to learn that she was so young.

It was her lack of self-­consciousness, he thought. There had been no trace of anxiety at the arrival of uniformed officers. No breaking of her silence with mutinous answers. And he couldn’t help the discomfiting feeling that she’d been weighing him up. Deciding whether he was worthy of being talked to.

Gytha Lodge is the author of She Lies in Wait, Watching from the Dark, and Lie Beside Me. She studied English at Cambridge University and received an MA in creative writing from the University of East Anglia. 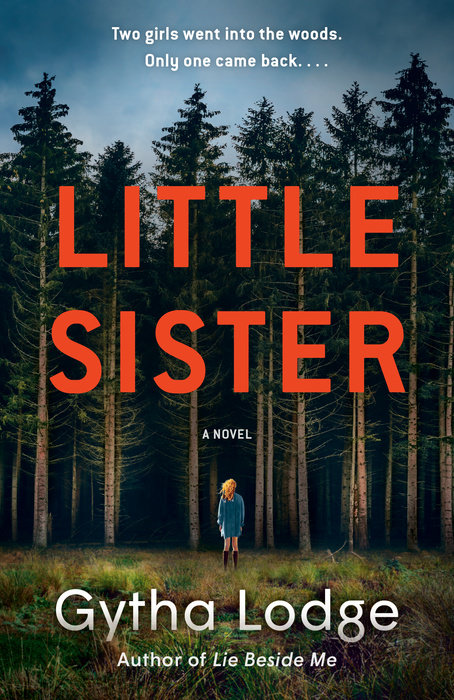