A kiss is never just a kiss in The Mismatch, a cross-generational story about love, family, faith, and finding yourself.

“Enlightening, poignant, and romantic . . . The Mismatch transported me back to that feeling of first love and first heartbreak.”—Sophie Cousens, New York Times bestselling author of This Time Next Year

Now that Soraya Nazari has graduated from university, she thinks it’s time to get some of the life experience she feels she’s lacking, partly due to her strict upbringing—and Magnus Evans seems like the perfect way to get it.

Where she’s the somewhat timid, artistic daughter of Iranian immigrants, Magnus is the quintessential British lad. They have little in common, so there’s no way Soraya could ever fall for him. What’s the harm in having some fun as she navigates her postgrad life? And he could give her some distance from her increasingly complicated home life, where things are strained by her father’s struggles, her mother’s unhappiness and her eldest sister’s estrangement under a vague cloud of shame fifteen years earlier.

Distracting herself with Magnus is easy at first. But just as Soraya realizes there’s more to Magnus than she thought, long-buried secrets, and hard questions, begin to surface—will any of her relationships survive the truth coming out?

Moving between modern-day London and revolutionary Iran, The Mismatch is a gorgeously written coming-of-age story that follows a young woman as she finds love in a most unexpected place, and a path in life amid two different cultures.

An excerpt from The Mismatch

When people asked Soraya how many people she had slept with the number varied depending on her mood.

Or sometimes she might say nothing at all, instead suggesting she didn’t want to talk about it, which made them think the number was at the higher end. Such inquiries focused on her level of experience, worked on the assumption that she must have some, so she didn’t feel bad about lying. She knew she couldn’t expose the extent of her inexperience; to be different was to be noticed. She didn’t want to be noticed. Not in that way.

Soraya Nazari was twenty-one years old and had never been kissed.

At school and sixth form it was clear she was a virgin; everyone knew she wasn’t allowed a boyfriend; her family’s strictness was recognized. She wore unflattering clothes that showed no skin, revealed no curve, her shape left to the imagination, though she doubted anyone bothered to imagine it. She didn’t go to parties, or the final year prom. She wasn’t allowed.

At university, away from home, in London, no one knew her past. The only exception was her closest friend, Oliver. But his predicament was akin to hers, their mutual understanding unspoken and concrete.

Perhaps suspecting moving away from home would lead to haram acts, a week before Soraya left, three years ago now, her mum took her for a walk on Worthing Beach.

There was only an elderly couple walking along the seafront at a distance. The wind was lashing hard enough almost to blow her mum’s silk hijab away. Despite the wind though, the sky was clear.

“I need to talk to you about something, and you need to take what I say seriously,” her mum said.

Soraya could already feel the weight of what her mum wanted to say, and longed to escape such a conversation.

“Boys will try and get you alone when you go away. They may try and do things with you.” Despite her mum’s grave tone, Soraya rolled her eyes. “Don’t let them do that. They only have one thing on their mind. Doing it would ruin your life. And remember”—she paused for dramatic effect—“God is watching.”

At least she hadn’t lied to her mother: nothing did happen at university.

Soraya carefully considered everything she did; she thought and rethought the consequences of her actions. It was not as simple as once she moved away from home to university, all of the teachings from her younger years about the importance of morals and purity were discarded. She was gradual in her approach; gradual in doing the things she’d longed to do when she was growing up.

In first year, she drank for the first time, took drugs, and went to parties.

In second year, she wore short skirts and dresses without tights.

In third year, she attempted to talk to boys. But unlike the other rules she broke, this one was difficult to do with reckless abandon. Muslim guilt was a funny thing. It came when she least expected it.

It was impossible to disentangle her guilt at disobeying God from the guilt of disobeying her parents. The weight of it sat limp and heavy inside her.

Because she was a girl the rules enforced upon her all related to her sexuality, specifically with the aim of preserving her virginity. Going to parties and drinking alcohol led to a loosening of inhibitions (supposedly), which would (supposedly) then lead to premarital sex, known as zina. A shameful deed, an evil, which leads to other evils.

But with more and more time spent away from home, she wondered why sex was so evil. Why disobeying her family was so abhorrent. Why so much focus in her family’s preaching was on controlling her, rather than on her being a good and just person.

She longed to think freely, and not overanalyze her every decision.

Such thoughts, while troubling in the dead of night when she was unable to sleep, were unimportant now. It was a week before her graduation, and she had to either find a job or move back home with her parents. While she was once, three years ago, like a rabbit released into the wild, there was now the imminent threat of having to return to the same small hutch. A hutch she had outgrown.

“Why do you want to work for Purple B? Why marketing? Why data protection?”

It was Soraya’s first graduate job interview, but she was fairly certain they were meant to ask only one question at a time.

She laughed nervously to buy herself some time. She looked around the bland meeting room, hoping inspiration would spark, but with its glass walls it was sterile apart from the rectangular table and the chairs surrounding it.

“Um, well, I have a keen interest in social media, and I know how to use all the channels really well. You’re a company that prides yourself on keeping people and companies safe, and data protection is incredibly important, especially today, with all the scandals in the news . . .” She wasn’t actually sure if there were any scandals in the news currently but gave them a “you know” look as though this was obvious.

The two interviewers nodded slightly. The younger of them was a portly man who gave her a reassuring smile, while the bald-headed, older man was impassive.

Their team was small, contained within one medium-size office, and the meeting room she was in was akin to a fish tank. She didn’t dare look at the workers outside for fear that they were looking in.

“How do you think you can get people to subscribe? There’s so much free content online everywhere these days, how can you encourage paid subscribers?” the older man asked.

Well, Soraya thought, aren’t you meant to teach me that? Somehow this was not a question her English literature degree had prepared her for.

She knew how painful it was to attempt to read Ulysses in just one week, about the layers of symbolism in A Doll’s House, could compare the different portrayals of misers in seventeenth-century literature, even knew Ronald Knox’s ten commandments of detective fiction by heart. But all of that was useless to her here.

“Through social media . . .” Soraya began but wasn’t quite sure how to finish. They looked at her, waiting. “And online engagement . . .” These buzzwords meant nothing to her.

After four more similarly painful interactions, they thanked her and said they would be in touch in the coming weeks.

“Before you go, I have to ask,” the portly man began, “where are you from?”

Her smile faltered for just a second.

“Really?” he said, leaning forward. The other man was gathering papers, ignoring the conversation around him.

“Well, some people say I have a bit of a Northern accent because my family used to live in Liverpool, so I guess I might have a Northern twang . . .”

“I meant more your name. Soraya Nazari.” He said it with the emphasis on the wrong letters, putting his Western spin on it. “It’s different, rather . . . ​exotic.”

There was a short silence.

How many times in recent years had Soraya been called “exotic”? Too many. And yet, she couldn’t remember anyone calling her that back home when she was younger. She remembered frequently being called a “Paki” however.

At first, she didn’t mind the term “exotic,” preferred it to racial slurs anyway. But it was only when she told her friend Priya this and Priya’s immediate reaction was to spit out “We’re not f***ing fruit!” that Soraya realized it wasn’t a good thing, but rather an act of othering.

A dictionary definition of “exotic” is

1. Introduced from another country: not native to the place where found.

4. Of or relating to striptease.

So, with this definition in mind, it stung to be called “exotic.” But she was desperate; this was the first graduate interview she had been invited to, and she had applied for jobs all summer, so she pretended to be unbothered by his comment.

“Anyway,” the older man said, standing, perhaps saving his colleague from making any further remarks. “Thank you, Soraya, for coming in.”

She shook their hands in turn, remembering to use a firm grasp as though they’d hire her based on her above-par handshake despite the interview being a flop.

As she waited for the lift—an awkward experience in which she pretended she couldn’t see everyone working around her as there was no corridor, the office being just one room—she felt an unfounded sense of hope. Maybe she didn’t do so badly, she thought. Perhaps it was like in exams when she thought she did terribly, but in reality got a respectable B.

When the lift eventually arrived Soraya quickly walked in and pressed the close button. She looked at herself in the mirror, straightening her Zara trouser suit. She had red lipstick smudged on her front teeth, which she wiped off quickly with her clammy forefinger, hoping they hadn’t noticed.

Sara Jafari is a London-based British Iranian writer whose work has been longlisted for Spread the Word’s Life Writing Prize and published in gal-dem and The Good Journal. She is a contributor to I Will Not Be Erased and the romance anthology Who’s Loving You. Jafari works as an editor and runs TOKEN magazine, which showcases writing and artwork by underrepresented writers and artists. The Mismatch is her debut novel. 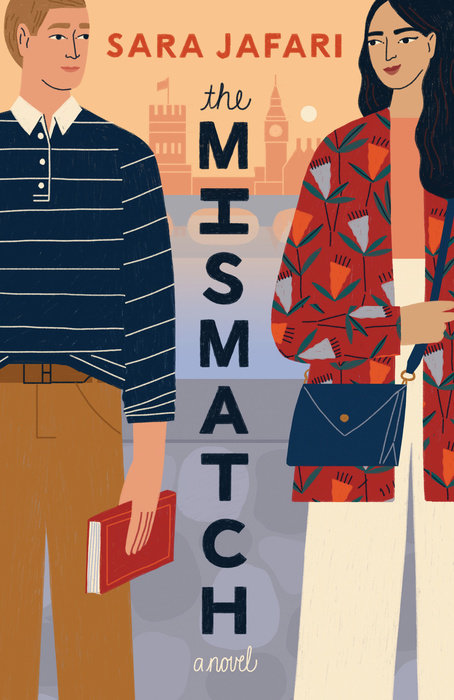