A brilliant young author’s stunning fiction debut: gorgeously immersive and imaginative stories that transcend borders as they render the intimate lives of people striving for connection

“A beautiful debut by a deeply humane writer. Every story is a vivid world unto itself, intensely felt, and often revelatory.”—Nicole Krauss, author of The History of Love

The Man Who Sold Air in the Holy Land announces the arrival of a natural-born storyteller of immense talent. Warm, poignant, delightfully whimsical, Omer Friedlander’s gorgeously immersive and imaginative stories take you to the narrow limestone alleyways of Jerusalem, the desolate beauty of the Negev Desert, and the sprawling orange groves of Jaffa, with characters that spring to vivid life. A divorced con artist and his daughter sell empty bottles of “holy air” to credulous tourists; a Lebanese Scheherazade enchants three young soldiers in a bombed-out Beirut radio station; a boy daringly “rooftops” at night, climbing steel cranes in scuffed sneakers even as he reimagines the bravery of a Polish-Jewish dancer during the Holocaust; an Israeli volunteer at a West Bank checkpoint mourns the death of her son, a soldier killed in Gaza.

These stories render the intimate lives of people striving for connection. They are fairy tales turned on their head by the stakes of real life, where moments of fragile intimacy mix with comedy and notes of the absurd. Told in prose of astonishing vividness that also demonstrates remarkable control and restraint, they have a universal appeal to the heart.

We are a fruitful, many-branched, and sprawling family, ranging from Jaffa to Haifa, and our business is oranges. I will be eighty-seven at the turn of the new millennium, and I own one of the last true shamouti orange groves, where the fruit is sweet and the peel is thick. My four children—three sons and a daughter—work in finance and law, and my grandchildren—all nine of them—can’t tell the difference between a shamouti and a mandarin. From time to time, they come visit the grove in HaSharon, help pick the fruit, wrap it individually in waxed paper, and pack it in crates, which are later sold in the farmers market. I’m always reminded of a poem by Yehuda Amichai when I think of my children and my grandchildren. It’s called “Eyes,” and I know it by heart. My eldest son’s eyes are like black figs for he was born at the end of the summer. And my youngest son’s eyes are clear like orange slices, for he was born in their season. And the eyes of my little daughter are round like the first grapes. And all are sweet in my worry. And the eyes of the Lord roam the earth and my eyes are always looking round my house. God’s in the eye business and the fruit business. I’m in the worry business.

When I stumble across the young woman wandering around the grove, I’m preparing for the spring. Since dawn, I’ve been clearing out the unripe fruit clogging the irrigation canals. I’m wearing my tembel hat, its brim hardly covering my large ears, which stick out. My movements are slower than they used to be, my bones ache. The woman, wearing a button-down blouse, billowing beige pants, and sandals, is accompanied by one of my workers, an Arab man who guards the grove, whose hands are always clean and spotless, fingernails clipped and neat. The woman does not seem surprised to see me. In fact, she’s been looking for me. She is starkly beautiful with radiant olive skin, dark, tumbling curls, and black eyes under unusually large lids. She tells me she is the granddaughter of my childhood friend Khalil Haddad, a Palestinian whose father owned one of the largest orange groves in Jaffa during the British Mandate.

I can see the resemblance immediately in her eyes. He had the very same ones, dark as coal, heavy-lidded. I try to control my breathing, as we walk through the grove, the light golden on the plump fruit. Her hands cradle the oranges, she presses her ear to them, as if they might whisper a secret. What does she know? What has Khalil told her? My heartbeat is rapid, my hands shake. I have not spoken Khalil’s name aloud for years and years. None of my children or grandchildren know his name. The soft grass is spotted with fallen fruit, buzzing bees flit from purple lemon flowers to white lime flowers. Lilah explains that Khalil told her about me—his devoted childhood friend, his only Jewish friend—countless times. When her grandfather died several months before, she decided to come here to ask me about him. She loved him very much, but she feels like she doesn’t know much about his past in Palestine before he lived in London, before the war, before al-Nakba.

“It wasn’t an easy trip for me,” Lilah says.

Despite her British passport, she tells me that she was interrogated by the border control officers for hours at the airport.

“And what did you tell them? That you were just going to talk to an old man about his oranges?”

“It doesn’t matter what I told them. I am Palestinian, so they were suspicious.”

I never saw Khalil after he departed with his family. So many Palestinians fled by sea and land, after the heavy bombardment of Jaffa. The port was overwhelmed with refugees crowding small boats. The Haddad family, like the other orange growers, dismantled their water pumps and deserted their grove, carrying with them only a small portion of their belongings in handcarts. Jaffa was burning, the trees in the orchard were burning, the oranges were burning, and the flames spiraled up into the sky, and for days, ash floated in the air, blanketing the abandoned city in a haze. I don’t like to think back to those moments.

“Khalil and I packed the oranges together into crates in your great-grandfather’s orchard. We wrapped each orange individually in waxed paper.”

I pick an orange and withdraw a pocketknife, flick the blade open. The blade glints in the sun, and I see my own face reflected in it, splotched with cancer spots and a sprinkling of veins like the rootstock of a tree. Without noticing, I’ve grown old. Rot sets quickly in an orange, infecting the entire fruit. The trick is to squeeze it firmly and listen to its sound. You can tell by the fermented smell that it’s spoiled. But the orange in the palm of my hand is young, unblemished. I dissect it, peeling the thick skin in one long curly slab, and offer her the naked fruit coated in porous, bitter white tissue.

She eats a segment, juice spilling down her chin, and spits out a pip. “I thought Jaffa oranges were meant to be seedless,” she said.

At the time, for a Jew like me to be friends with a Palestinian like Khalil wasn’t so strange. Under Ottoman rule, Jews and Palestinians carted sand together to make cement, toiled in orange groves and vineyards, tinkered in metalwork factories, ran seaside brothels, and oversaw the Bride of the Sea’s crown jewel, Jaffa harbor’s booming export business, fleets of cargo vessels sailing around the world, carrying citrus fruit. When Palestine changed hands, from the Ottomans to the British, my life remained mostly unchanged.

As a child, I spent most of my time in the packinghouse with Khalil, wrapping oranges and packing them in crates. It was a good job, monotonous but not difficult. Every morning I walked with Khalil to the packinghouse, past the newspaper vendor selling copies of Falastin, and Abouelafia’s bakery, where filo pastries were baking in large stone ovens, stopping by Abu Ahmad’s, the tiny sweetshop, our favorite spot for halvah for many years before it burned down. Camels ambled lazily through Clock Square, their hooves clicking on the cobblestones. Khalil’s father and the other landowners sat under the shade of palm trees in elegant white suits, drinking coffee from small glasses.

“Tell me about my grandfather,” Lilah says. Her voice is excited, like a little girl waiting to open a present. Her eyes—Khalil’s eyes—gleam.

“Well, he was mischievous.”

When we were nine, I tell her, Khalil decided to steal a camel, and he enlisted my help. The camel belonged to a rival landowner named Nabil, a crook renowned for his temper, who humiliated his workers. Once Nabil struck a Bedouin girl who stumbled over the hem of her dress and dropped the fruit that she carried in a basket on her head. For this, Khalil wanted to punish him.

That night, barefoot, we scaled the tall walls surrounding Nabil’s grove. The air smelled of salt and fish from the sea, citrus and orange blossoms from the land. I cut the soft flesh of my foot on a sharp brick edge, bleeding into the wall, and Khalil, already at the top, his legs swinging on either side, reached out his hand to hoist me up. The grove was pitch-black, grass long and thick, trees alive with chirping and rustling, startled birds taking flight.

Most of Nabil’s camels were tied by the warehouse and packinghouse on the first floor. But there was one camel he prized above all, a dark-furred racing beast he kept separately. She was nicknamed Midnight, Muntasaf al-Layl. Her coat was pitch-black. We found her sitting elegantly on her own, tied to the well, aloof and mysterious. Untying her, we loosened the coarse rope around her neck, pulled and pulled, tugging with all our strength, but no matter what we did, we couldn’t make the proud beast follow our orders. She simply sat there, her long curved neck unmoving, blinking slowly at us. We yanked the rope, clucked and cursed her. Finally, Khalil stomped the ground in frustration, and she reared up, straightening her legs. She charged us, her fierce jaw snapping, drooling fat lips, crooked teeth snarling. We backed away, but she lunged at us, making a high-pitched bleating sound, then moaned loudly.

Suddenly Nabil was beside us, dressed in his nightgown, a sheer silk robe spilling to the floor, dragging behind him on the grass. He wore nothing underneath his gown, and I could make out the shape of his body, the bulge of his belly, through the thin fabric. I thought Nabil, his face contorted in anger, would strangle us to death.

“What stopped him from strangling you?” asked Lilah.

“Khalil stopped him. Simply because of who he was, he could get away with a lot more than me. His father was an important man in Jaffa.”

Omer Friedlander was born in Jerusalem in 1994 and grew up in Tel Aviv. He earned a BA in English literature from the University of Cambridge, England, and an MFA from Boston University, where he was supported by the Saul Bellow Fellowship. His short stories have won numerous awards and have been published in the United States, Canada, France, and Israel. A Starworks Fellow in Fiction at New York University, he has earned a Bread Loaf Work-Study Scholarship as well as a fellowship from the Vermont Studio Center. He currently lives in New York City. 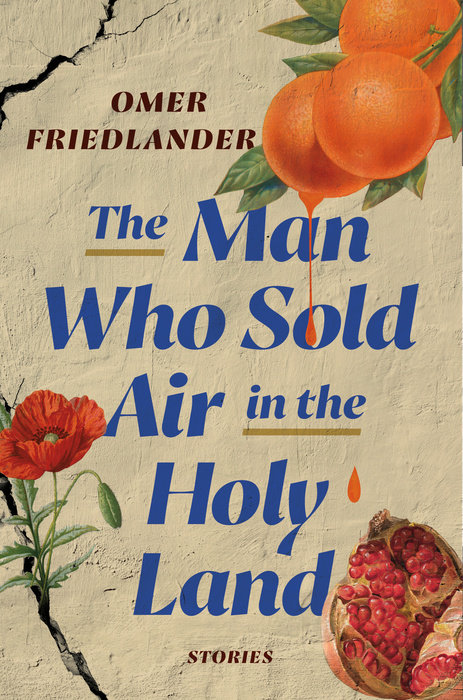