NEW YORK TIMES EDITORS’ CHOICE • “Looking for an addictive summer read? This crime drama embedded in a moving portrait of two Maine families marks the debut of a genius storyteller.”—People (Book of the Week)

“I tore through the saga of the Thatch family in two nights. The Midcoast is a reader’s dream—tense, ominous, and deeply wise.”—David Benioff, co-creator of Game of Thrones

ONE OF THE MOST ANTICIPATED BOOKS OF 2022—The Washington Post, Town & Country, The Millions, CrimeReads

It’s spring in the tiny town of Damariscotta, a tourist haven on the coast of Maine known for its oysters and antiques. Andrew, a high school English teacher recently returned to the area, has brought his family to Ed and Steph Thatch’s sprawling riverside estate to attend a reception for the Amherst women’s lacrosse team. Back when they were all teenagers, Andrew never could have predicted that Ed, descended from a long line of lobstermen, or Steph, a decent student until she dropped out to start a family, would ever send a daughter to a place like Amherst. But so the tides have turned, and Andrew’s trying hard to admire, more than envy, the view from Ed’s rolling backyard meadow.

As Andrew wanders through the Thatches’ house, he stumbles upon a file he’s not supposed to see: photos of a torched body in a burned-out sedan. And when a line of state police cruisers crashes the Thatches’ reception an hour later, Andrew and his neighbors finally begin to see the truth behind Ed and Steph’s remarkable rise. Soon the newspapers are running headlines about the Thatches, and Andrew’s poring over his memories, trying to piece together the story of a family he thought he knew.

A propulsive drama that cares as deeply about its characters as it does about the crimes they commit, The Midcoast explores the machinations of privilege, the dark recesses of the American dream, and the lies we tell as we try, at all costs, to protect the ones we love.

An excerpt from The Midcoast

Back when I lived out of state, people always used to get excited when they found out where I was from. They didn’t meet all that many Mainers—I was like a moose descended from a log cabin, wandering their backyard, eating their shrimp—and wondered if I was from anywhere near the town where they’d gone to summer camp or cruised in their custom sloop. Sometimes I was, sometimes I wasn’t, but Maine is a large state with more coastline than California, I liked to point out, plenty of old gray villages like the one I grew up in, plenty of places to get lost or hide, especially when socked in by a heavy fog. Maybe they’d heard of Damariscotta if they’d ever taken a vacation to the Midcoast, but they tended to pronounce the name wrong and then ask what it meant, and I would say either River of Little Fishes in Abenaki or something Scottish, we weren’t really sure. If they asked what the town was known for, I would have said brick-making, then ice-shipping, then oysters and this one little gallery that sells lobster buoys painted to look like political figures, but this was all before Maeve and I moved back home and bought our coastal charmer with a view!, a listing so pyritic that its author, our realtor, met us at the door mid-apology and with a referral to a rodent removal service.

Before my return I was still telling that old joke, whenever I needed to explain where I was from, about the local who has to give directions to a visiting urbanite. “You can’t get the-yah from he-yah,” says the Mainer, which tells you a little about the roads and highways on the Midcoast, a little more about the shotgun wariness that’ll greet you on so many overgrown front porches, and a lot about the granite breakwalls between those who’ve been here for generations and those who’ve landed more recently, within the past century or two. I am one of these newer arrivals, not a true Mainer—if your parents are from elsewhere, you don’t count, even if you moved to town at age three—but at least I’m not a tourist. We all scowl at the tourists. They ascend as one big traffic jam every summer and presume to know the place just because they’ve rented a cottage with bunk beds and weathered a gentle nor’easter. The other day I saw a couple in matching sunglasses lingering in front of the Sotheby’s, gazing at a flyer full of homes, one of which belonged to the Thatches, our town’s wealthiest family; when I overheard them indulging in the fantasy of moving here year-round, imagining Maine as the way life should be, I found myself wishing I had some other flyer with pictures of the peeling shack Ed Thatch lived in as a child, or the trailer he and his wife Steph moved into when they were only eighteen (or our own drafty ranch, for that matter), just to show these dreamers what they might find if they ever arrived in the off-season and ventured down the wrong dirt road.

To move on from any of these dirt roads was supposed to be impossible, but then the Thatches did just that, moved from there to here—well past here, actually. Steph loved to remind us of their early days, all the hard work and long hours that had put them on this different track, and it’s not that we didn’t believe her, just that we’d heard it all before, heard it plenty. But every small town has its own running dramas, its own local celebrities (there’s a set of twins that’s been calling our high school basketball games since the big playoff run in ’89, and there’s a mussel farmer who wears a bodybuilding getup in every parade—we think because mussel and muscle are homophones—and he’s been doing it since I was in college). So I guess I always assumed I’d return to the Midcoast, if I returned, to find things basically where I’d left them. And most things were. Just not the Thatches. Which was fine. They were off in the distance, nothing to do with us, their rise and fall like a rolling swell tumbling down the coast.

People do move here for the views. Ours is of the salt bay, partially, but also of our neighbor’s three-car garage and a pyramid of algae-covered lobster traps. “The real deal” is how our realtor described the neighborhood, meaning that what we’d see through our windows was mostly the slowly revving engine of Mainers going nowhere. Unless there’s a fog. Then there’s nothing to see, only what everyone else can see, only what’s right in front of us.

But it was a sunny day in May the last time I saw Ed, one year ago now, when I, Maeve, Jack, and Jane went to the Thatches’ house to attend “A Reception in Honor of Amherst Women’s Lacrosse.” That Ed and Steph had somehow given life to and sent into the world a freshman midfielder on the Amherst women’s lacrosse team had never stopped seeming completely implausible, and yet we all knew Allie’s story—this was the daughter—because Ed would give you the lowdown any chance he got. You’d be walking out of the post office or into the natural foods co-op when there’d be a loud honk and you’d look up to see Ed hanging out the driver’s side of his Silverado, banging a flat hand against the door. “Hey, Andy! Two goals against Tufts! She’s on some kinda roll!” And before you even had time to congratulate her, or really him, he’d be thundering down the low brick canyon of Main Street, past the art gallery and the butcher shop, both of which leased from him.

Our family was late getting to the reception so had to park on the shoulder of the gravel driveway, way up by the main road, behind a chartered bus and a steep line of out-of-state SUVs, their rear windows papered in Amherst Lacrosse stickers, Nantucket beach permits, and faux-European circle decals designed to make mv and obx look like legitimate nation-states. Back when Ed and I had worked as teenage dockhands at the Pound, Ed would have called this visiting herd Your kind of people, Andy, but he’s the only one who ever called me Andy, and I always resented the characterization—perhaps because it fit. I had gone away to Exeter, then Dartmouth, played lacrosse at both stops, roomed with Virginia aristocrats who now arrived at reunions with fulltime nannies and made a show of matching any and all donations to the scholarship fund.

I thought I understood, then, what we were getting ourselves into. The women’s lacrosse team would get feted and fed the day before its big game against Bowdoin College. There would be chicken parm and Gatorade. Dads would get sloshed and lean a little too close and deliver pointed musings about the way the team ought to be run, who should be getting more of a burn, who should be riding more pine. They’d be wearing shiny polos with their country clubs’ emblems on the breast, pastel belts embroidered with whales and three-woods. The moms would be overdressed in whatever summer attire had just arrived in the boutiques of Wellesley or Annapolis, and they would ask the players about their girlfriends, or in this case boyfriends, or maybe it didn’t matter anymore.

But as we steered our kids between the Thatches’ garage (formerly a farmhouse) and the house (formerly a barn) and made our way onto the backyard (really a long shimmering meadow that humped down to the river over a series of small hills like an off-season ski slope) it became clear that Ed had taken the concept of “pre-game reception” in a whole new direction. What we were stumbling into was more like a spectacular Midcoastthemed carnival. There was a train of folding tables dressed in purple gingham tablecloths, a trailer-length grill blowing smoke into the sky, and a massive white tent strung with yards and yards of hanging lightbulbs. There was even an inflatable lobster the size of an elephant (where had Ed procured it? I had no idea. I assumed he must have stolen it from some boarded-up state fair). Someone had wedged a lacrosse stick in the lobster’s left claw, and visitors were taking pictures of each other standing next to it as if they had slain the poor thing. The rest of the meadow was overtaken by players, parents, and coaches, all of them wearing purple.

Adam White grew up in Damariscotta, Maine, and now lives with his wife and son in Boston, where he teaches writing and coaches lacrosse. He holds an MFA from Columbia University. The Midcoast is his first novel. 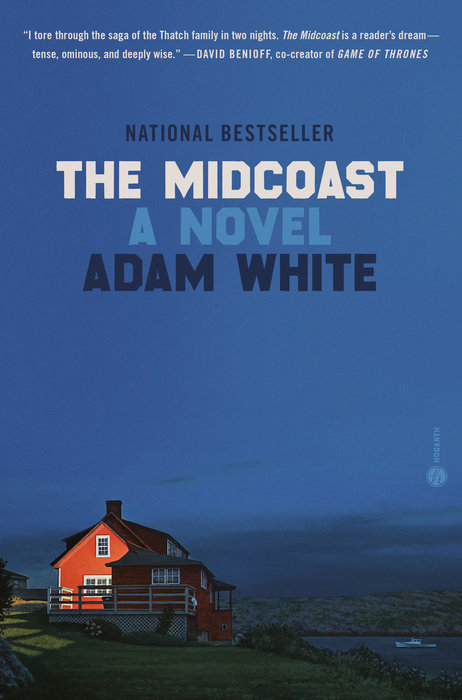