A blackmailer targeting wealthy members of “Sister” Jane Arnold’s club has turned the hunters into the hunted in this thrilling mystery from New York Times bestselling author Rita Mae Brown.

It’s the start of fox-hunting season and Sister is training a new generation of hounds in eager anticipation of Opening Hunt. But before they make it to that exciting day, several members of the hunt club receive ominous videos in which they appear to be doing scandalous, career-ending deeds. The videos are doctored, but does it matter? The unknown blackmailer promises to publish the clips if they don’t get paid, and even the most upstanding citizen can be brought down by the court of public opinion.

While Sister and her friends try to unmask the dastardly mind behind the videos, mysteries abound in their beautiful Blue Ridge Mountain town home. Two men die, apparently by suicide, shocking a community that never saw their deaths coming. And rumors abound that Old Paradise, the estate being lovingly restored by Crawford Howard, houses a secret stash of gold from its original owner. Does someone want the treasure badly enough to kill for?

Sister and her fellow Jefferson Hunt Club members, including friends both two- and four-legged, are on the case—and with any luck, they’ll catch the criminals before the first horn sounds on opening day.

An excerpt from Thrill of the Hunt

The bottom rim of the setting sun touched the spine of the Blue Ridge Mountains, the golden light, like a veil, slid down over the western side of the ancient mountains.

Jane Arnold, “Sister,” drove slowly north toward Chapel Crossroads. Raleigh, her Doberman, and Rooster, her harrier, looked out the back window, interested in all they passed.

To her left, commanding thousands of acres, reposed Old Paradise, an estate of uncommon beauty, begun in 1814. War, changes of fortune, Nature’s good years and bad years, left their mark. Finally, the outbuildings and majestic home became a reduced treasure, rubble, really. The estate was being restored by Crawford Howard, a man of great wealth. At long last the house had walls, a roof, gorgeous marble steps up to the double doors. As so many drawings had been made of the impressive place, Crawford could revive Old Paradise close to its original state.

Stopping to admire the incredible palatial home, these slanting rays of the sun washed the Corinthian columns gold, then orange, lastly scarlet. The capital’s acanthus leaves below the cornice now deepened from gold to scarlet, finally blood red. As the last of the light turned the capitals blood red, blood seemed to run down the tall, elegant, fluted columns.

Sister stopped, slightly shivered for a moment, then drove slowly toward the crossroads a quarter of a mile ahead. The simple church for which the crossroads was named at the beginning of the eighteenth century glowed in the sunset’s aftermath, now a sugary blue fading to twilight’s gray.

Old Paradise, once close to twenty thousand acres, now five thousand, remained impressive. The final touches to the interior were ongoing. All outbuildings had been restored. Crawford started there first, figuring his workers and the staff archaeologists could cut their teeth on these buildings, some as old as the house itself. The stable alone was extraordinary, as was the Carriage House, both finished in 1816. Apart from the wealth of Old Paradise, secure wealth for close to two centuries, finally frittered away, the estate displayed sensible layout, a true working farm with buildings intended to last centuries, which they did. Support beams, slate roofing, brick floors all held up. Wrought iron sagged off hinges for stalls, water troughs fell apart, but the core of those buildings stood firm. The DuCharmes, the family that owned it for those centuries, had a sense of elegance as well as pragmatism.

The founder of this extraordinary place was Sophie Marquette, a woman who stole from the British supply wagons during the War of 1812. As she was so divine-­looking, officers babbled. She would show up in Maryland, or sometimes along the James River, ingratiating herself with the invaders. They had no idea, thinking the attacks on the supply wagons, the payroll, too, was the work of special army units among the Americans. Sophie was the mastermind of a small team. The woman made a howling fortune. After the war she put it to good use farming and endowing a private school for girls, Custis Hall. Eventually she did marry, picking a man for brains as well as brawn, Widmore DuCharme.

If she could see it now, she would believe she was home, except for the fact that there were cars, tractors, equipment she would have never seen. Flexible, quick to learn, Sophie would have figured it out.

Sister could never pass Old Paradise or wind up on those lovely acres without thinking of this remarkable woman. As much as she and Crawford could butt heads, she was grateful to him.

His research team, using ground-­penetrating radar, found the slave graveyard, totally overgrown. They also found a smaller, seemingly disorganized scattering of bodies. They believe these were Monacans, a native tribe of Virginia who lived in the area. All was done by Crawford and Marty, his wife, to honor the deceased, giving credit as best they knew it for the lives and contributions of the deceased to this shimmering estate.

Many of the slate tombstones, restored, displayed the name of the deceased, birthdate, death date. Often a carving accompanied this. A cross, a lamb, a palm, perhaps a key or even a sphinx decorated the marker.

Sometimes the chased fox would rip through the cemetery. Sister would glance at the tombstones, telling herself one day she would try to figure out the symbol’s relationship to the deceased. Given the demands of being a Master of Foxhounds, she had not gotten to that yet. She told herself she would, as the living wanted to honor their dead. Of course, all were gone now.

At the crossroads, Sister turned right, passing the old train station, now restored by a hunt club member. The Northern and Southern trains stopped using the Victorian structure in the early 1950s. It, too, had been restored. Chapel Cross, surrounded by old estates, remained much as it had been even back to the early nineteenth century. Places sold rarely; often the inheritors of these historical relics hung on by their teeth, steadfastly refusing to sell for housing developments.

This made Chapel Crossroads perfect for foxhunting. As Sister was the Master of the Jefferson Hunt, she kept her eye on all the farms. Today she had visited every feeder box for her foxes in the area. This took two hours. The cubs were now half-­grown, so she could again put a bit of wormer on the food. She was religious about cleaning out parasite loads. If she could, she trapped the young foxes, taking them to a vet cleared by the state to work on wildlife. Each disgruntled fox received a 7 in 1 shot plus a rabies shot, then she returned them home. Consequently, Chapel Crossroads hosted healthy, beautiful, saucy foxes, both red and gray.

The area burst with wildlife. Sometimes Sister, visiting a landowner, would sit with them, watching the black bears walk across the pasture, or a herd of deer gracefully leaping fences. She never tired of it, the birds always seem to be singing for her.

She stopped again, looking back at Old Paradise, the columns visible in the lingering twilight. A rumble followed by another, sounding like a loud cough, made her lower her window. She listened a moment then raised the window.

“A little earthquake,” she informed her dogs, who had felt it before she did.

September air cooled quickly after sunset. She turned off the air conditioner, set at seventy-­four, drove the twenty-­five minutes home.

The gravel drive off the two-­lane paved highway snaked through meadows and some old hardwoods for two miles until she passed her eight-­stall stable, turned left to the house, passing the kennels, hounds dozing in their condos, others on their inside sleeping benches.

Across from the kennels rested a small log cabin that predated the brick house, the big house. This place, like Old Paradise, had stood the test of time, but with far less drama. A clapboard addition had been built in 1834 and was still tight as a tick.

Parking her car, she hopped out, opened the back door to release the dogs. Her husband’s monstrous Land Cruiser was parked near the house’s back door.

As she stepped through the mudroom and into the kitchen, the calico long-­haired cat, Golliwog, lifted her head. “I’m ready for supper.”

Sister stroked her for a moment, reached down to pet her dogs, then walked down the hall to the library. “Just a minute, you two, I’ll get to you.” She raised her voice, “Gray.”

“You’re home. Thought I heard the car.” He came out of the library, gave her a big hug and a kiss.

He shrugged. “The Commonwealth of Virginia is still confused about this bug. No more indoor gatherings, but we can have outdoor gatherings. I think people will show up for the first day of cubbing. Afterward we can social distance, keep it at six feet.”

“I hope you’re right.” She looked down at the dogs. “Let me feed everyone.”

“I’ll feed you. I made my mother’s famous pork chops. The ones you stand on end. And a little salad and fresh corn.” Gray smiled.

They reached the kitchen, where he took over the stove. She grabbed the big electric can opener. “Honey, when is the last time you used a manual can opener?”

“I guess since the earth was cooling.” He laughed, clicking on the gas stove.

This exclamation was followed by fresh tuna . . . real tuna from the can, not cat food. Not another word from the cat, whose face was in her dish, her name on it in blue script. 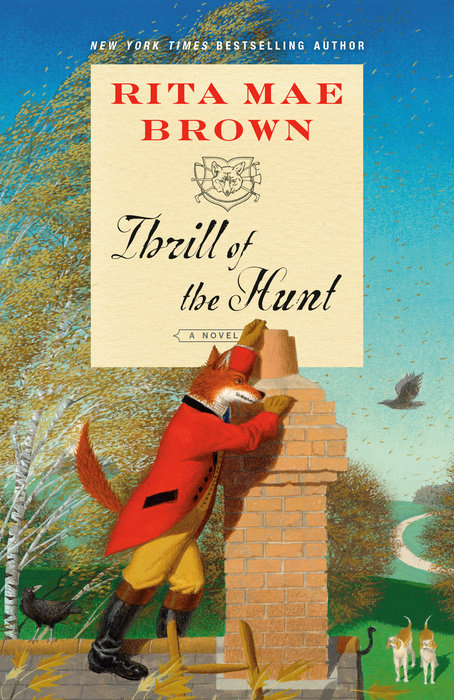