A CIA analyst makes a split-second decision that endangers her country but saves her son—and now she must team up with an investigative journalist she’s not sure she can trust in this electrifying thriller from the New York Times bestselling author of Need to Know.

“[A] turbo-charged thriller [with] a final mind-blowing twist.”—People

It’s Jill’s job to vet new CIA sources. Like Falcon, who’s been on the recruitment fast track. But before she can get to work, Jill gets the call. Her son has been taken. And to get him back, Jill does something she thought she’d never do.

Alex Charles, a hard-hitting journalist, begins to investigate an anonymous tip: an explosive claim about the CIA’s hottest new source. This is the story that Alex has been waiting for. The tip—and a fierce determination to find the truth—leads Alex to Jill, who would rather remain hidden.

As the two begin to work together, they uncover a vast conspiracy that will force them to confront their loyalties to family and country. An edge-of-your-seat thriller, You Can Run will have you asking: What would you do to save the ones you love?

An excerpt from You Can Run

The clock in the corner of my screen reads 10:59 a.m. I stare at the digits, willing them to change, and for time to pass a little bit quicker. The minutes just after eleven will pass at warp speed; they always do. But the ones before are endless, interminable.

A muted chime dings, the familiar sound of a new cable hitting my queue. My gaze shifts from the clock in the corner to the browser window, open to the cable-­tracking system, Fortress. A list of cables arrayed like an email inbox, the new one at the top, in bold type.

From Damascus Station. Request for Encryption of New Source, FALCON.

I knew the cable was coming, just didn’t know it’d be today. It’s a quick recruitment, for sure. But this guy, the one we’re now calling Falcon, he’s been on the fast track since day one, no doubt about that. He’s set to be the CIA’s newest source, once I vet him and send the cable up the chain. Something I’ll start working on in exactly thirty-­one minutes.

Control-­Alt-­Delete. The cable system disappears, replaced with a small version of the Agency seal set against a black background. I catch sight of my reflection in the screen, and it catches me off guard, how little it looks like me. Hair in desperate need of a cut—­and a style. Dark circles that no amount of makeup or coffee can fade.

Not the way I always imagined I’d look at this point in my life, for sure. But I wouldn’t trade it for anything. It took three years of hopes and tears and injections—­and all our savings—­to get here.

“Eleven o’clock already?” Jeremy asks from the cubicle across from mine, right on cue. Same question every day. Creatures of habit, both of us.

I stand and grab my tote bag, sling it over my arm. “Sure is.”

“Enjoy your lunch, Jill.” He smiles awkwardly, pushing his glasses up the bridge of his nose. From anyone else it might seem like a dig, a why-­on-­earth-­are-­you-­taking-­a-­lunch-­break-­at-­eleven, but not from Jeremy. From him it’s just conversation.

Besides, eleven’s lunchtime, no doubt about it. Four hours of work, half-­hour lunch, four more hours until the end of the day. The perfect midpoint. And more importantly, the thirty-­minute window during which I’m guaranteed to catch sight of Owen. After his morning nap, before the afternoon one. Eleven’s the scheduled time for his second bottle of the day, and now a container of pureed veggies, too.

If you’d have told me six months ago I’d see a cable like that in my queue and skip out at precisely eleven to watch an infant eat mashed peas, I’d have laughed. A baby won’t change anything, I’d have said. Turns out, he changed everything.

Fact of the matter is, this is the kind of cable a reports officer like me lives for. The chance to vet a source like Falcon, at a time like this.

He’s a Syrian defense official attached to a covert biowarfare program, working deep in one of our darkest of black holes. And biowarfare’s the new hot topic, like terrorism after 9/11. We’ve seen the fear a pandemic sows, the hit it takes on an economy.

Our adversaries have seen it, too. And quite frankly, that terrifies us.

By all accounts, everyone’s ramping up their biowarfare programs. But penetrations of these covert programs are sorely lacking. And we at the CIA are desperate for sources.

A. J. Graham’s the one who’s behind this recruitment. Our best case officer in Damascus. It’s my job to double-­check his work, make sure he didn’t miss anything, that he hasn’t been compromised, blackmailed. I’m a trained case officer myself, but I traded life in the field for a desk at headquarters when Drew and I learned we’d have to start IVF.

I wade through the sea of cubicles and out of the windowless vault, with its stark, bare walls and too-­bright fluorescent lighting. Down the narrow hall now, my pace quick, and up two flights of stairs to ground level. I badge out through an electronic turnstile, passing the host of armed guards. Into the lobby, then out into the sunshine.

A blast of warm air hits me, magnified by having left the frigid AC. It’s June, and it’s got to be close to ninety already. I wonder if they took Owen out for a stroller ride before it got too hot; I hope so. I can probably squeeze in another before dinner.

The path leading to the parking garage is perfectly landscaped, flanked on either side by vibrant blooms, and right now it’s almost empty. No one else is leaving at this hour, and I pass only a single person heading toward the building: a woman in a suit, an impenetrable briefcase clutched tight at her side. A briefer, no doubt, heading back from downtown.

My RAV4’s on the top level of the parking garage, which, oddly enough, is at ground level; the lower levels are built into a hill. I’m halfway down one of the middle rows, like always. I slide into the car and start the engine, crank the AC. Then I open my laptop on the seat next to me, power it on. While it’s booting up, I turn on my cellphone, then take my lunch bag out of my tote, open it up. Looks like Drew packed us salads today, topped with leftover grilled chicken from last night. I take out the plastic containers and arrange them on the center console.

I have this process down by now, know the exact order to maximize these thirty precious minutes. As soon as the phone’s ready, I switch on the mobile hotspot. Then I open up a browser on the laptop, navigate to Favorites, click on the one saved link. A flashy homepage appears almost instantly.

All Children’s Learning Academy. Learning Through Play. Ages 6 weeks to 6 years. I use the touchpad to move the cursor to the upper right corner. Parent Login. Type in my username, password, hit return, and a new screen appears. Infant Room. I click the link below—­Live View—­and wait for the video feed to load.

It’s a little strange, I know, eating lunch in my car. But personal electronic devices are prohibited inside the building, and I’d never access something personal like this from my work computer. And it’s not like I’m missing out on much social interaction. Before maternity leave I ate lunch at my desk every day, worked straight through. Most everyone in the vault does. I do feel a bit guilty for actually taking my lunch break, but eight hours—­ten with the commute—­is too long not to see Owen. If there’s one thing I’ve learned since he was born, it’s that guilt is inescapable.

Black-­and-­white footage appears on the screen, a trio of boxes, three separate camera angles. The main play area, littered with toys; the cribs lined up in the napping section; the kitchen, with a row of identical high chairs. Everything except the diaper-­changing station.

I focus on the kitchen. There are two babies side by side in the row of high chairs, but neither is Owen. I look in his crib—­empty—­and scan the others, but there’s just a single baby still sleeping, one with a thick head of dark hair, completely unlike Owen’s blond fuzz.

Play area next. A handful of babies crawling around, one mouthing a plastic toy, another two strapped into low bouncy chairs. No sign of Owen. He must be getting a diaper change.

I glance at the clock in the corner of the screen. 11:07. Still plenty of time. I reach for the salad container on the console, pry off the lid, pour on the vinaigrette that Drew carefully packed in a separate little container—­

A shrill ring from my phone startles me. I reach for it, check the illuminated screen. Unknown. Probably some sort of spam—­

I press the green button and hold the phone to my ear. “Hello?”

The voice is deep, robotic, devoid of inflection. An electronically altered voice, the kind I’ve heard in horror films.

We have your son.

Panic grips me. This isn’t real. This can’t be real.

Everything’s calm in that room. Normal. Not like someone burst in there and nabbed a child—­

“Breathe a word of this to anyone and you’ll never see your son again.”

It’s a scam. It has to be. I’ve read about this, seen it on the news. A parent receives a call like this, their child’s abducted or in trouble, and they panic, clear out their bank accounts, hand over everything. And all the while, the kid’s going about his day, safe at school or home or whatever.

I get it now. I get why they run straight to the bank. Because this is terrifying.

I stare at the video feed, the side of the play area that leads to the diaper-­changing station. He’s going to be in that frame any minute now, clean diaper, ready for his bottle. He has to be.

“You have three minutes to verify this information.”

Karen Cleveland is a former CIA counterterrorism analyst and the New York Times bestselling author of Need to Know and Keep You Close. She has master’s degrees from Trinity College Dublin and Harvard University. Cleveland lives in North Carolina with her husband and three children. 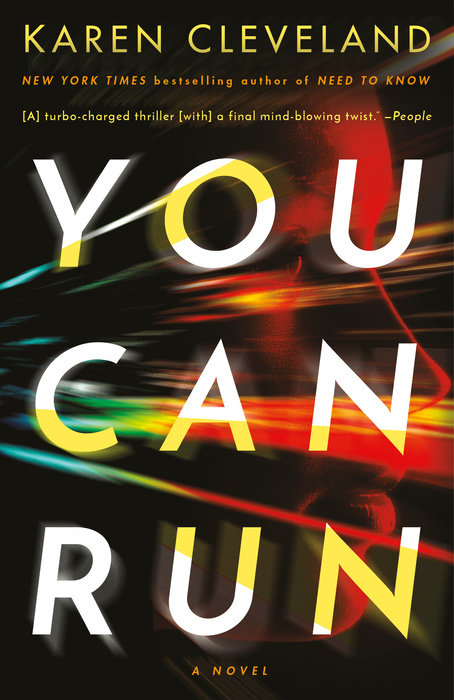