“Frances Moore Lappé is one of the few people who can credibly be said to have changed the way we eat—and one of an even smaller group to have done it for the better.”—The New York Times

In 1971, Diet for a Small Planet broke new ground, revealing how our everyday acts are a form of power to create health for ourselves and our planet. This extraordinary book first exposed the needless waste built into a meat-centered diet. Now, in a special edition for its 50th anniversary, world-renowned food expert Frances Moore Lappé goes even deeper, showing us how plant-centered eating can help restore our damaged ecology, address the climate crisis, and move us toward real democracy. Sharing her personal journey and how this revolutionary book shaped her own life, Lappé offers a fascinating philosophy on changing yourself—and the world—that can start with changing the way we eat.

An excerpt from Diet for a Small Planet (Revised and Updated)

No one has been more astonished than I at the impact of Diet for a Small Planet. It was born as a one-page handout in the late 1960s, and became a book in 1971. Since then it has sold close to two million copies in a half dozen languages. What I’ve discovered is that many more people than I could ever have imagined are looking for the same thing I was—a first step.

Mammoth social problems, especially global ones like world hunger and ecological destruction, paralyze us. Their roots seem so deep, their ramifications endless. So we feel powerless. How can we do anything? Don’t we just have to leave these problems to the “experts”? We try to block out the bad news and hope against hope that somewhere someone who knows more than we do has some answers.

The tragedy is that this totally understandable feeling—that we must leave the big problems to the “experts”—lies at the very root of our predicament, because the experts are those with the greatest stake in the status quo. Schooled in the institutions of power, they take as given many patterns that must change if we are to find answers. Thus, the solutions can come only from people who are less “locked-in”—ordinary people like you and me. Only when we discover that we have both the capacity and the right to participate in making society’s important decisions will solutions emerge. Of this I am certain.

But how do we make this discovery?

The world’s problems appear so closely interwoven that there is no point of entry. Where do we begin when everything seems to touch everything else? Food, I discovered, was just the tool I needed to crack the seemingly impenetrable facade. With food as my grounding point I could begin to see meaning in what before was a jumble of frightening facts—and over the last ten years I’ve learned that my experience has been shared by thousands of others. Learning about the politics of food “not only changed my view of the world, but spurred me on to act upon my new vision,” Sally Bachman wrote me from New York.

To ask the biggest questions, we can start with the most personal—what do we eat? What we eat is within our control, yet the act ties us to the economic, political, and ecological order of our whole planet. Even an apparently small change—consciously choosing a diet that is good both for our bodies and for the earth—can lead to a series of choices that transform our whole lives. “Food has been a major teacher in my life,” Tina Kimmel of Alamosa, Colorado, wrote me.

The process of change is more profound, I’m convinced, than just letting one thing lead to the next. In the first edition of this book I wrote,

Previously when I went to a supermarket, I felt at the mercy of our advertising culture. My tastes were manipulated. And food, instead of being my most direct link with the nurturing earth, had become mere merchandise by which I fulfilled my role as a “good” consumer.

So while many books about food and hunger appeal to guilt and fear, this book does not. Instead, I want to offer you power. Power, you know, is not a dirty word!

In 1969 I discovered that half of our harvested acreage went to feed livestock. At the same time, I learned that for every 7 pounds of grain and soybeans fed to livestock we get on the average only 1 pound back in meat on our plates. Of all the animals we eat, cattle are the poorest converters of grain to meat: it takes 16 pounds of grain and soybeans to produce just 1 pound of beef in the United States today.

The final blow was discovering that much of what I had grown up believing about a healthy diet was false. Lots of protein is essential to a good diet, I thought, and the only way to get enough is to eat meat at virtually every meal. But I learned that, on the average, Americans eat twice the protein their bodies can even use. Since our bodies don’t store protein, what’s not used is wasted. Moreover, I learned that the “quality” of meat protein, better termed its “usability,” could be matched simply by combining certain plant foods. Thus, the final myth was exploded for me.

I was shocked. While the world’s experts talked only of scarcity, I had just discovered the incredible waste built into the American meat-centered diet. And nutritionally it was all unnecessary! My worldview flipped upside down. Along with many others in the late 1960s, I had started out asking: “How close are we to the limit of the earth’s capacity to provide food for everyone?” Then it began to dawn on me that I was part of a system actively reducing that capacity.

Hidden Resources Plowed into Our Steaks

What I failed to appreciate fully ten years ago was that the production system that generates our grain-fed-meat diet not only wastes our resources but helps destroy them, too. Most people think of our food-producing resources, soil and water, as renewable, so how can they be destroyed? The answer is that because our production system encourages farmers to continually increase their output, the natural cycle of renewal is undermined. The evidence for this is presented in Part II, but here are a few facts to give you some sense of the threats to our long-term food security:

• Water costs. Producing just one pound of steak uses 2,500 gallons of water—as much water as my family uses in a month! Livestock production, including water for U.S. crops fed to livestock abroad, accounts for about half of all water consumed in the United States, and increasingly that water is drawn from underground lakes, some of which are not significantly renewed by rainfall. Already irrigation sources in north Texas are running dry, and within decades the underground sources will be drawn down so far that scientists estimate a third of our current irrigation will be economically unfeasible.

• Soil erosion. Corn and soybeans, the country’s major animal feed crops, are linked to greater topsoil erosion than any other crops. In some areas topsoil losses are greater now than during the Dust Bowl era. At current rates, the loss of topsoil threatens the productivity of vital farmland within our lifetime.

• Energy costs. To produce a pound of steak, which provides us with 500 calories of food energy, takes 20,000 calories of fossil fuel, expended mainly in producing the crops fed to livestock.

A Symbol and a Symptom

The more I learned, the more I realized that a grain-fed-meat diet is not the cause of this resource waste, destruction, and dependency. The “Great American Steak Religion” is both a symbol and a symptom of the underlying logic of our production system—a logic that makes it self-destructive.

Our farm economy is fueled by a blind production imperative. Because farmers are squeezed between rising production costs and falling prices for their crops, their profits per acre fall steadily—by 1979 hitting one-half of what they had been in 1945 (figures adjusted for inflation). So just to maintain the same income farmers must constantly increase production—planting more acres and reaping higher yields, regardless of the ecological consequences. And they must constantly seek new markets to absorb their increasing production. But since hungry people in both the United States and the Global South have no money to buy this grain, what can be done with it?

One answer has been to feed about 200 million tons of grain, soybean products, and other feeds to domestic livestock every year. Another, especially in the last ten years, has been to sell it abroad. While most Americans believe our grain exports “feed a hungry world,” two-thirds of our agricultural exports actually go to livestock—and the hungry abroad cannot afford meat. The trouble is that, given the system we take for granted, this all appears logical. So perhaps to begin we must stop taking so much for granted and ask, who really benefits from our production system? Who is hurt, now and in the future?

In this book I seek to begin to answer such questions.

Frances Moore Lappé is the author or co-author of twenty books about world hunger, living democracy, and the environment, beginning with the three-million-copy Diet for a Small Planet in 1971. She has been featured on the Today show, Hardball with Chris Matthews, Fox & Friends, The Wall Street Journal, NPR, the CBC and BBC, and other news outlets. Frances is the cofounder of three organizations including the Oakland-based think tank Food First and the Small Planet Institute, which she leads with her daughter, Anna Lappé. The pair also cofounded the Small Planet Fund, which channels resources to democratic social movements worldwide. 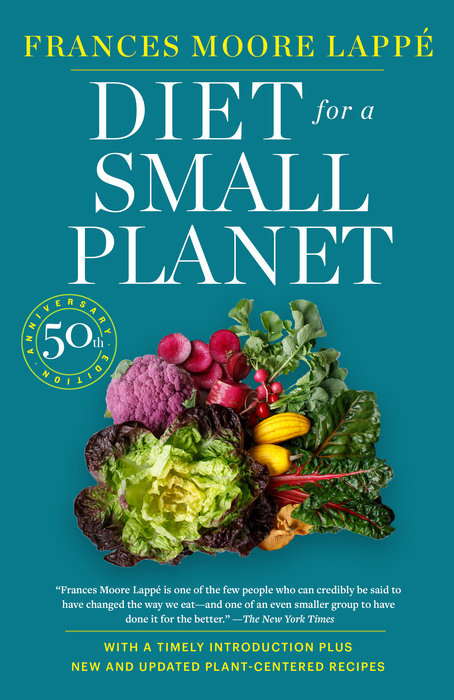