Secrets, jealousy, and paranoia collide when a seemingly perfect new family moves into a neighborhood with ties to the CIA in this gripping thriller from the New York Times bestselling author of Need to Know.

“Karen Cleveland ingeniously melds domestic intrigue with the lightning pace of a spy thriller, showing us the devastating personal costs of intelligence work.”—Tess Gerritsen, New York Times bestselling author of Listen to Me

Now, facing an empty nest and a broken marriage, Beth is moving from the cul-de-sac she’s long called home, and the CIA is removing her from the case that’s long been hers: tracking an elusive Iranian intelligence agent known as The Neighbor.

Madeline Sterling moves into Beth’s old house. She has what Beth once had: an adoring husband, three beautiful young children, and the close-knit group of neighbors on the block. Now she has it all. And Beth—who can’t stop watching the woman stepping in to her old life—thinks the new neighbor has something else too: ties to Iranian intelligence.

Is Beth just jealous? Paranoid? Or is something more at play?

After all, most of the families on the cul-de-sac have some tie to the CIA. They’re all keeping secrets. And they all know more about their neighbors than they should. It would be the perfect place to insert a spy—unless one was there all along.

An excerpt from The New Neighbor

“Perfect,” I say, eyeing Tyler through the viewfinder of my Nikon, pressing down gently on the shutter release. I lower the camera, check the image captured on the screen. Tyler’s smiling broadly, bathed in early morning sunlight, leaning on the handle of his rolling suitcase, the freshly painted front door behind him, the stone planters on either side bursting with late summer color. It’s true, it’s the perfect shot, Instagram-worthy, if I were into that sort of thing. The last picture I’ll snap of one of my kids in front of the home where we raised them.

But it shouldn’t be the last, should it? Perfect as it is, it’s all wrong.

Tyler’s already walking past me, heading toward the driveway, suitcase in tow.

“Right there, with the cul-de-sac behind you.”

He smiles again for the camera, this time with a touch of exasperation, and I get the shot. I lower the camera and check the screen. Better. There’s the for sale sign in the yard, under contract tacked to the top. But I can Photoshop that out.

“It’s just an empty street,” Tyler says, looking out at the loop.

I follow his gaze. The Kanes’ and the Johnsons’ and the O’Malleys’. Softly lit houses, lush lawns, mature landscaping. Everything quiet, everything perfect. And he’s right—the street is empty.

He continues on down the path to the driveway, suitcase wheels clacking over the breaks in the concrete. In the driveway, Mike’s starting the car, the engine sputtering softly. Everyone’s ready but me.

I’m still staring at the loop of pavement, and in my mind’s eye it becomes full again. Figures appear, almost ghostly at first, but gradually coming into focus. Children on bikes, some still with training wheels; others drawing with sidewalk chalk; the younger ones toddling around, unsteady on their feet. Their mothers, sitting in lawn chairs arrayed in a half circle, chatting and laughing—

“Mom!” comes Tyler’s voice from the driveway, and the figures vanish. The cul-de-sac is empty once again.

“Coming.” I start walking toward the driveway, and can’t help but steal one last glance at the street. That scene was so clear in my mind I would have sworn it was real.

It’s a two-and-a-half-hour drive to the University of Virginia, another half hour to wait for a parking space to open up. When it finally does, the three of us make our way to Tyler’s dorm, an old brick building near the center of campus, past a courtyard with big shade trees.

The room itself is small, a typical dorm room, with two of everything: extra-long twin beds, desks, dressers, all the furniture solid and well worn. We’re the first to arrive.

I start unpacking while Mike and Tyler head down to the car for more boxes. Place stacks of clothes into the dresser drawers. Books and school supplies on the desk. I’m placing a couple of pairs of shoes into one of the small closets when they walk back in, maneuvering the TV box through the door.

“I don’t need you to unpack,” Tyler says to me as they set down the box on the carpeted floor, leaning it against the dresser.

The door opens before he can object, drawing our attention.

A skinny teenage boy with a smattering of acne stands in the doorway. Must be the new roommate. He and Tyler have chatted online, followed each other’s social media accounts, but they haven’t met in person yet. “Hey,” the boy says, lifting a hand awkwardly.

“Sweetheart, can you walk all the way through the door, please?” comes a terse voice behind him. He steps forward into the room, and a woman follows, giant-sized Target shopping bags in each hand. Two blond grade-school-age girls trail behind her, sullen looks on their faces, bickering. She shakes her head at me. “Kids.” She rolls her eyes, then adds, “Hi. I’m Beth.”

She must be the mother, but she’s young. Mid to late thirties, maybe. Tight-fitting workout clothes, hair that looks freshly styled, flawless makeup, not that she needs it. I’m instantly conscious of my own appearance. Loose-fitting clothes, air-dried hair, ChapStick. And my age. I have a decade on her, at least.

We might have the name in common, but the similarities end there.

“Near DC. McLean.” I watch for any spark of recognition. In the DC area, McLean is synonymous with Langley, which inevitably leads to questions about the CIA. Fortunately, though, her expression remains blank, and I don’t need to be evasive about my career. “What about you?”

One of the girls elbows the other, who instantly shouts, “Mom!”

“Girls, cut it out,” she says curtly. Then, to me, “I should have brought their iPads.”

The room, already small, now feels almost claustrophobic. The two boys are helping Mike pull the TV out of the box; there’s barely room for the three of them between the two beds.

“It’s a madhouse out there,” she says to me, moving the shopping bags to the unclaimed side of the room.

“Would have left earlier if I’d known.” She shakes her head. “Rookie mistake.”

I smile. She reaches into one of the shopping bags, pulls out an unopened set of sheets, then a new pack of smart plugs, the same kind the kids talked us into getting at home. Everything’s controlled with a voice now, or an app.

“Is this your first time, too?” she asks. “Sending someone off to college?”

“Actually, third. Our girls are already out of college.”

“Yeah?” she says, pulling out a plastic-wrapped pillow, then reaching back into the bag. It looks like she raided the back-to-school section of the store. “What are they doing now?”

“My oldest is a teacher. She just got married in June.”

“No way.” She pauses and looks at me, a boxed Bluetooth speaker in her hands. “Gosh, you might have grandchildren soon.”

The words are cringeworthy. I’m not old enough for that. And Aubrey’s too young to be married, let alone have kids. I mean, she’s the age I was when I had her, but still. “Well, they want to get a house first. Settle down. But they’re looking for one, so it might not be long. . . .” I realize I’m rambling. “And my younger daughter just graduated from Georgetown in May. Took a job as a travel reporter. She moved to London last month.”

“How exciting. What a summer for your family.”

What a summer, indeed. “And your girls? How old are they?”

“Ten and eight. We’re still in the gymnastics and soccer stage of life.”

The girls are sitting on the bare mattress of one of the twin-sized beds, still looking petulant. The older one says something quietly to the younger one, who immediately says, “No I didn’t!”

“Girls,” she scolds, turning toward them. “I said enough.”

She turns back to me. “So you’re going home to a quiet house.” She gives a wry laugh. “Lucky you.”

I force a smile.

It’s really hot in here. Mike and the two boys have the TV out of the box now, packing material strewn about. She’s opening up the second shopping bag.

I check my watch. Ten minutes until eleven. “Well, I think Tyler’s things are mostly unpacked, so I’ll get out of here, give you all some space to move around.”

“No kidding. It was really nice to meet you.”

“Likewise,” she says with a smile.

I turn toward Mike. “I’m going to wait outside. Come get me when you and Tyler are ready for lunch, okay?”

Tyler’s focused on unwrapping cables and cords, doesn’t even look up. I watch him for a moment, then turn and let myself out of the room.

I sit on an empty bench under a large shade tree, just outside the entrance to the dorm. The air is fresh and pleasantly cool, and the leaves are rustling softly. I pull my phone from my purse, open up the HomeWatch app. A live feed appears. It’s from the default camera, the one mounted above our front door, looking down at the porch, and the street beyond. Street’s empty, porch is empty. Everything’s quiet.

I set down the phone on the bench beside me and watch the passersby. Anxious teenagers, parents loaded down with boxes and suitcases and shopping bags. New beginnings for some, chapters closing for others. Bittersweet.

Karen Cleveland is a former CIA counterterrorism analyst and the New York Times bestselling author of Need to Know and Keep You Close. She has master’s degrees from Trinity College Dublin and Harvard University. Cleveland lives in North Carolina with her husband and three children. 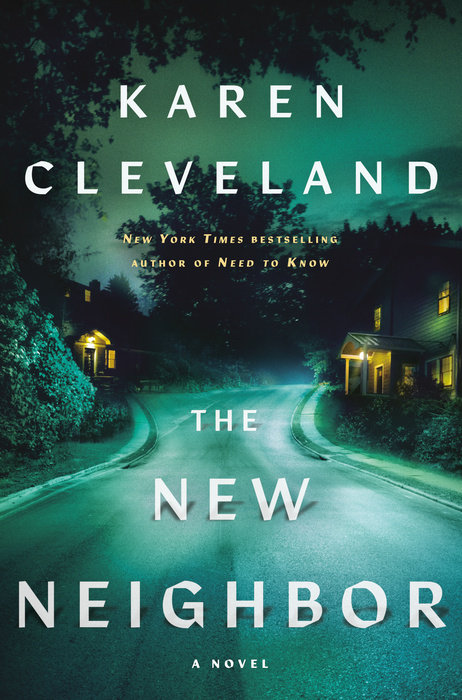