A “bold and unflinchingly sexy” (Vogue) debut novel about a young woman who follows her desires into a world of pleasure, decadence, and privilege, unraveling everything she thought she knew about sex . . . and herself.

“One of the most entertaining books about sex I’ve ever read . . . The perfect read for fans of Raven Leilani and Ottessa Moshfegh, this is a book that will have people talking.”—BuzzFeed

“Anytime I want, I can forsake this dinner party and jump into real life.”—Eve Babitz

Eve has an adoring girlfriend, an impulsive streak, and a secret fear that she’s wasting her brief youth with just one person. So one evening she posts some nudes online. This is how Eve meets Olivia, and through Olivia the charismatic Nathan. Despite her better instincts, the three soon begin a relationship—one that disturbs Eve as much as it enthralls her.

As each act of their complicated, three-way affair unfolds across a cold and glittering New York, Eve is forced to confront the questions that most consume her: What do we bring to sex? What does it reveal of ourselves, and one another? And how do we reconcile what we want with what we think we should want?

In the way only great fiction can, Acts of Service takes between its teeth the contradictions written all over our ideas of sex and sexuality. At once juicy and intellectually challenging, sacred and profane, Lillian Fishman’s riveting debut is bold, unabashed, and required reading of the most pleasurable sort.

An excerpt from Acts of Service

I had hundreds of nudes stored in my phone, but I’d never sent them to anyone. The shots themselves were fairly standard: my faceless body floating in bedrooms and bathrooms, in mirrors. Whenever I took one I fell in love with it for a moment. Standing there, naked and hunched over my little screen, I felt overwhelmed with the urge to show someone this new iteration of my body. But each photo seemed more private and impossible than the last.

You could see in them something beyond desire, harder and more humiliating. While I was brushing my teeth or stepping out of the shower I would see my own body and find myself overwhelmed with a sense of urgency and disuse. My body was crying out that I was not fulfilling my purpose. I was meant to have sex—­probably with some wild number of people. Maybe it was more savage than that, that I was meant not to f*** but to get f***ed. The purpose of my life at large remained mysterious, but I had come around to the idea that my purpose as a body was simple.

I was too fearful of the world to go out and get f***ed, too plagued by hang-­ups, memories of shitty girlfriends, fears of violence. Instead I took photos. In the photos my body looked stunning, unblemished, often arched as though trying to escape the top of the frame. I was like a spinster full of anxieties and repressions, charged with chaperoning a young girl who could not fathom the injustice of the arrangement.

One night when I was feeling exceptionally beautiful and isolated I decided to start sharing the nudes online. I used a website that anonymized usernames and disguised IP addresses, and I put up three photos with no accompanying text.

I was on my girlfriend’s toilet, the next morning, when Olivia messaged me. My post had accumulated more responses than I could possibly read. Perhaps it shouldn’t have come as a surprise that none of the lewdness, the appreciation, not even the occasional brutality of these comments satisfied me. The anonymity of the photos felt cowardly, the distance of the viewers so great as to make their sentiments meaningless. The only part that thrilled me was repeatedly refreshing the page to see the photos reconstitute themselves again and again, not in a private folder on my phone but in a shared white room accessible from all corners of the world.

I was guilty of some trespass against my girlfriend, Romi—­that was clear from the fact that I was refreshing the page while hiding in her bathroom. Romi’s drugstore-­brand cleanser was perched on the sink. Her clean hospital scrubs hung on the back of the door like a poor drawing of a person. But, I reasoned, looking down at my phone, the photos had nothing to do with her. It was only my body that appeared in them, and my body didn’t belong to her.

What would Romi do if I showed her the photos? She’d be a little sad, a little confused. What can I do? she would say, convinced that only some inadequacy of hers could leave me wanting the affirmation of strangers.

I assumed the vast majority of the responses were from men. Their comments were full of typos and references to their erections. I smiled, scrolled. When I refreshed again the message at the top was from a user called paintergirl1992. I read the words in the preview—­Excuse me—­and stifled a laugh.

Excuse me, the message read, I’m sorry to intrude! Your photos are very beautiful. Thank you for sharing. I would love to buy you a drink—­are you in NY? Sorry to be so forward. I hope you have a lovely day—­Olivia

olivia, I replied, where do you live in ny?

Baby? Romi said loudly from the hall. Are you okay in there?

Olivia was replying in real time.

Clinton Hill, Olivia wrote. BK! Are you in NY too?

Olivia sent a link to a social-­media profile.

Do you want some coffee? Romi called through the door.

I opened Olivia’s profile. I didn’t know what to think. I put down my phone and yelled, Yes, over the flush of the toilet.

You can see why I didn’t trust myself. There was no reason, in the first place, that I should feel so beautiful and isolated. I had a lovely girlfriend—­selfless, adoring, great in bed, with the strong arms and shoulders produced by years of rugby. Yet for reasons that were still unclear to me I had uploaded the photos the previous evening while sitting only two feet away from her, after dinner, while she answered some emails.

The only thing I was clear on was why I had never shown Romi the photos. Romi was the noblest person I had ever met. I liked extreme people, people who seemed to embody an unambiguous idea about life. What would it feel like to be unwaveringly good? The poles of Romi’s nobility were her self-­sacrificing nature and her absolute insusceptibility to the superficial. From a young age, she had prized a sense of competence and the belief that she was capable of making a significant social contribution. After toying with the possibility of a political career, she had decided to pursue pediatrics. In her off-­hours she volunteered as an EMT.

She was so preoccupied with her vocation that she was immune to beauty. The concept hadn’t occurred to her outside an introductory art-­history course. Her choices were made on the basis of function. The building she lived in was expensive and tasteless, full of beige amenities. Aside from the special uniforms required for exercise or job interviews, every piece of clothing she owned had been picked up for free at some athletic tournament or at the annual reunion for which her fit, cheerful family ordered matching polos. She ate sandwiches and salads and she ate them exclusively at chain restaurants.

Her consistency was perfect. She’d decided she was attracted to me even before she had any idea what I looked like—­when all she knew about me, as I liked to joke later on, was that I was a woman with an excellent memory for the names of novelists whose work I’d never read. We had met two years earlier on a crossword app that matched users of comparable ability. Romi was much better than I was at the crossword, but she was hampered by little free time and an aversion to competitive spite. As we chatted over a few months I found I liked the generosity of Romi’s messages—­even when I failed spectacularly, she never teased me—­and she endeared herself to me with the general bent of her knowledge, which was always embarrassing in areas of art or pop culture but acute with regard to politics, history, and the crucial art of synonyms. It felt lucky that she was a young gay woman, only five years older than I was and separated from me by only about a mile.

She didn’t love me for my body, though once we were intimate she claimed to recognize a special beauty in it. I didn’t believe her. She wasn’t discerning. The rapport we’d created online was the clear basis of Romi’s affection. Because I was decidedly superficial, and always had been—­nothing interested me more than the prettiness of a girl on the street—­a small but relentless part of my life entailed predicting the many ways I could f*** up our love. If I was going to deserve her I would have to remain as attentive as she was, as sexually generous, as loyal. Needless to say, I would have to avoid posting my nudes online.

But beyond Romi my desire was thirsty and fickle. I was neither loyal nor anarchic but, unable to decide between the two, guilty and scheming. The primary fantasy that followed me everywhere was a vision in which I was naked, lined up in a row of twenty girls, a hundred girls, as many naked girls as would fit inside the room I was in—­the café, the lobby of Romi’s building, the subway car. Opposite the line of girls was a man who scrutinized us. I can’t tell you what this man looked like. He was nondescript, symbolic. I would never actually f*** him. After about thirty seconds he pointed, without equivocating, at me.

Lillian Fishman was born in 1994 and lives in New York. She received her MFA from NYU, where she was a Jill Davis Fellow. Acts of Service is her first novel. 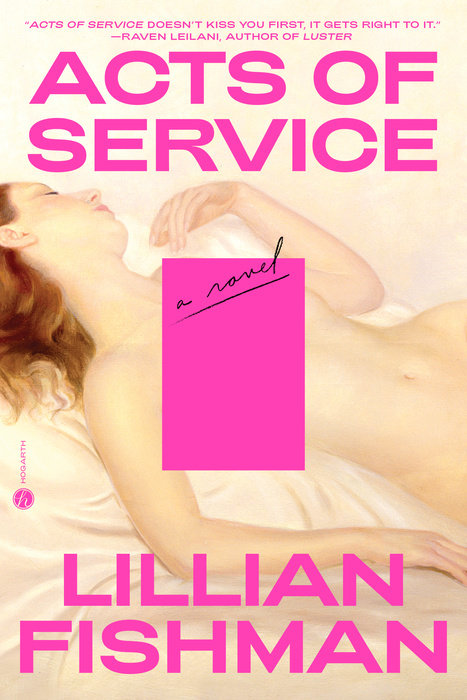