Five Decades of Stories from the Legendary Director of Taxi, Cheers, Frasier, Friends, Will & Grace, and More

“Being directed by the Jimmy Burrows, while on Friends, was like hitting the jackpot. I’m delighted that everyone can now share in his incredible insight with this book.”—JENNIFER ANISTON

From the director of The Mary Tyler Moore Show, Taxi, Cheers, Frasier, and Will & Grace comes an insightful and nostalgic behind-the-scenes memoir that’s “as difficult to put down as a Friends marathon is to turn off” (The Washington Post).

Legendary sitcom director James Burrows has spent five decades making America laugh. Here readers will find never-revealed stories behind the casting of the dozens of great sitcoms he directed, as well as details as to how these memorable shows were created, how they got on the air, and how the cast and crew continued to develop and grow. Burrows also examines his own challenges, career victories, and defeats, and provides advice for aspiring directors, writers, and actors. All this from the man who helped launch the careers of Ted Danson, Kelsey Grammer, Woody Harrelson, Jennifer Aniston, Debra Messing, and Melissa McCarthy, to name a few.

Burrows talks fondly about the inspiration he found during his childhood and young adult years, including his father, legendary playwright and Broadway director Abe Burrows. From there he goes on to explain his rigorous work ethic, forged in his early years in theater, where he did everything from stage managing to building sets to, finally, directing. Transitioning to television, Burrows locked into a coveted job with The Mary Tyler Moore Show, where he first observed and then started to apply his craft. Directing most of the episodes of Taxi came next, where he worked closely with writers/producers Glen and Les Charles. The three formed a remarkable creative partnership that helped Burrows achieve his much sought-after goal of ownership and agency over a project, which came with the creating and directing of the seminal and beloved hit Cheers. Burrows has directed more than seventy-five pilots that have gone to series and over a thousand episodes, more than any other director in history.

Directed by James Burrows is a heart-and-soul master class in sitcom, revealing what it truly takes to get a laugh.

An excerpt from Directed by James Burrows

James Edward Burrows was born in Los Angeles on December 30, 1940, but for as long as I can remember, I was Jimmy. I’m not sure where the James came from, but the Edward was after Ed Gardner, the star of the radio program Duffy’s Tavern and the best friend and mentor of my father, Abe. When I was five, we moved from Los Angeles back to New York City, which is where my childhood really began. We lived on the Upper West Side of Manhattan on 229 West 78th Street, between Amsterdam and Broadway, in a three-­bedroom apartment. It was here that my lifelong romance with sports began. On my bedroom wall I had taped up the cover of the first issue of Sports Illustrated, featuring Milwaukee Braves catcher Eddie Mathews and a picture of Dick Kazmaier, Princeton’s magnificent triple-­threat tailback. I was a big New York Yankees fan. I loved Mickey Mantle, Hank Bauer, Elston Howard, Yogi Berra, Phil Rizzuto, and Roger Maris. I saw Mantle hit home runs from both sides of the plate. I went to Ebbets Field for a World Series game. I watched Duke Snider play for the Brooklyn Dodgers.

My grandmother, Sarah, who spoke English with a Russian accent, lived nearby on 102nd and Broadway, on her own. She would come visit us often, a sweet and supportive fixture as we were growing up. My sister, Laurie, also possessed this same kindness, always looking to help others.

We were culturally Jewish but not very religious. Both my parents were agnostic atheists. My father was bar mitzvahed. My mom’s parents were Russian Jews, but religion was never an important part of their lives. They flirted in the 1930s with the whole communist movement, which was its own religion at the time, or at least a viable substitute for a conventional one. Both my parents spoke a little Yiddish. The expressions permeated and stuck with me. I heard pisk (mouth), machatunim (in-­laws), punim (face), and mishpucha (family). One word always struck me as weird-­sounding: fakeft, which means “beholden to.” I remember my father using it about one person who wanted to do a favor for him. He said, “No, I don’t want to be fakeft to him.” It’s a good word.

When I was twelve years old, I was asked if I wanted to have a bar mitzvah. I think if you give most Jewish boys at any point in our five-­thousand-­year history the choice of whether they want to put all the work into getting bar mitzvahed at that age, they’d probably decline. Which is what I did. But that’s not where that story ends. My first wife was conservative, and at her urging I got on the “Shul-­bus” and agreed to be bar mitzvahed when I was forty-­seven years old. The Charles Brothers said that I was the only man they knew who was bar mitzvahed at forty-­seven and lost his hair at thirteen.

What I do remember doing when I was thirteen was seeing movies. Fifty cents got you a ticket to a double feature and a newsreel. Before the Beacon Theater on Broadway and 74th Street became a live-­performance venue, it was a movie house. I went to see a double feature of Bwana Devil, with Robert Stack, Barbara Britton, and Nigel Bruce (Dr. Watson to Basil Rathbone’s Sherlock Holmes), and House of Wax, with Vincent Price. His muscular assistant, Igor, was played by Charles Bronson, in one of his first roles—­he was still using his real name, Charles Buchinsky. It was the first color 3D feature film from a major American studio, complete with stereophonic sound. The glasses were a novelty. The wax-­covered bodies scared the hell out of me.

I started playing golf at sixteen. I would ride the subway to play public courses throughout the city. I was self-­taught and loved the game. Over the years, my swing has gotten good but not as consistent as I aspired to. Occasionally I hit the ball square. There’s the old joke about the gorilla who hits the ball four hundred yards and then goes to putt and hits the ball another four hundred yards. Sadly, my golf game bears too close a resemblance to that joke. (These days, I like to play with my friend Al Michaels. He’ll often bring along two younger guys for a foursome. After they see me hit a couple of drives, they’ll ask me how old I am. When I tell them, their response is usually “No way!,” which always makes me smile.)

Growing up, I had a set of Lionel electric trains and a reel-­to-­reel tape recorder. I recorded all the groups that were ushering in the new form of music on the radio, rock and roll, including Bill Haley and His Comets, the occasional Elvis Presley. I fell in love with the rhythm-­and-­blues and rock groups: Danny and the Juniors, the Cleftones, the Drifters, Little Anthony and the Imperials, Frankie Lymon and the Teenagers, and all the doo-­wop singers. Groups of guys would cluster at every street corner and sing harmony. Wonderful sounds emanated from those corners, because the music we were singing—­all within four chords—­was accessible to us. Music became a crucial part of my life, especially because of its inextricable connection to comedy.

I was a reticent kid. Quiet in school, often playing stickball with a small circle of friends. On a good day, I could hit the ball for “two sewers,” the length of half a block. We also played stoopball and pitched pennies. I played basketball and baseball in Central Park. I drank vanilla egg creams (milk, vanilla syrup, and seltzer), ate penny candies, the dots on the white paper, and Borden’s vanilla ice cream.

My mother, Ruth Levinson, was the first person who instilled within me a sense of social awareness, politics, and social conscience. Every year, she had my sister, Laurie, and me march in the May Day parade downtown, which celebrated labor groups and trade unions. She was very left wing and did a lot of social work, including at the Hudson Guild, which helped the poor, and at the West Side Tenants Union. In 1951, she went across the street from our apartment building to Harvey’s Coffee Shop and put enough nickels into the pay phone to reach the White House, begging for clemency and a pardon for Julius and Ethel Rosenberg, who were tried and convicted for espionage. She came back and told us that she made the call to endorse her feelings but didn’t want to do it from home, because she didn’t want her children to be unfairly tarnished by her beliefs.

My dad, Abe Burrows, was the legendary writer, playwright, director, and producer. Born Abram Solman Borowitz, he grew up in Brooklyn, went to New Utrecht High School and then New York University. He first worked as a Wall Street runner, then as an accountant. In 1938, as Abram S. Burrows, he started writing jokes for nightclubs and radio broadcasts. Abe never aspired to be a writer. The only professional aspiration came from my grandmother, who wanted to be a doctor’s mother. Abe once wrote, “The only reason I started to write is that the Depression was on. I was out of work, and I found out that there were many comedians who needed jokes as much as I needed money.”

While they were good parents, my mom and dad’s marriage was far from storybook. I remember being eight years old, sitting on a fence at Floyd Bennett Field, right after my father flew back to Los Angeles to live and work. My mother told me that they were divorcing. “Mothers and fathers stop loving each other but never stop loving little children,” she said. I knew that things between my parents weren’t perfect, but there was rarely any yelling or screaming. Neither my sister nor I saw this coming. As I sat on that fence, I thought about how they were separating but wasn’t quite able to figure out why. I couldn’t wrap my head around it.

I didn’t know many kids whose parents weren’t together. That said, my parents did a good job raising us, even after the breakup. They were always attentive to Laurie and me and were cordial to each other as we shuttled back and forth between them. The lack of confrontation and communication was a shock for me that took a long time to get over. Beginning in my thirties, I spent more than two decades in weekly therapy sessions and eventually learned that I struggled with the divorce because I didn’t understand the animosity between my father and mother. Their parting came as a complete surprise to me because they never fought openly.

On the positive side, those events also contributed at least partially to my success as a director. Because I didn’t have that stability growing up, I’ve tried hard to provide stability with family, friends, and colleagues. My hypersensitivity made me a good read of people and talent, quicker to sense and manage tension on a set, a good listener, able to get people to work together constructively, and a facilitator of constructive and creative communication.

Five Decades of Stories from the Legendary Director of Taxi, Cheers, Frasier, Friends, Will & Grace, and More 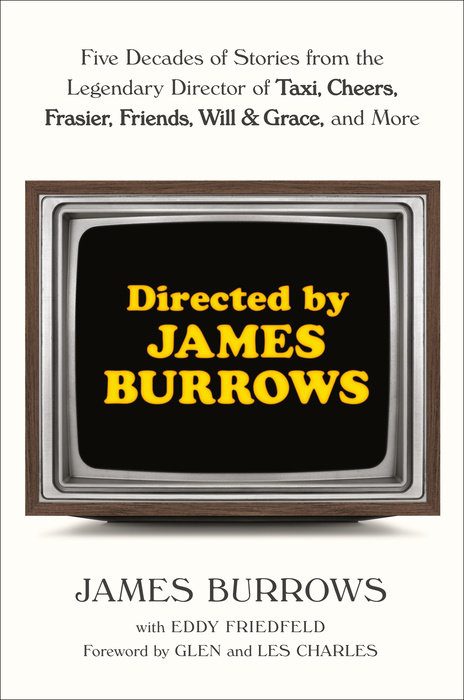