“Wilkerson transports you across the decades and around the globe accompanied by complex, wonderfully drawn characters.”—Taylor Jenkins Reid, New York Times bestselling author of The Seven Husbands of Evelyn Hugo, Daisy Jones & The Six, and Malibu Rising

We can’t choose what we inherit. But can we choose who we become?
In present-day California, Eleanor Bennett’s death leaves behind a puzzling inheritance for her two children, Byron and Benny: a black cake, made from a family recipe with a long history, and a voice recording. In her message, Eleanor shares a tumultuous story about a headstrong young swimmer who escapes her island home under suspicion of murder. The heartbreaking tale Eleanor unfolds, the secrets she still holds back, and the mystery of a long-lost child challenge everything the siblings thought they knew about their lineage and themselves.

Can Byron and Benny reclaim their once-close relationship, piece together Eleanor’s true history, and fulfill her final request to “share the black cake when the time is right”? Will their mother’s revelations bring them back together or leave them feeling more lost than ever?

Charmaine Wilkerson’s debut novel is a story of how the inheritance of betrayals, secrets, memories, and even names can shape relationships and history. Deeply evocative and beautifully written, Black Cake is an extraordinary journey through the life of a family changed forever by the choices of its matriarch.

An excerpt from Black Cake

Byron hears the elevator doors peel open. His first instinct is to rush toward his sister and embrace her. But when Benny leans in to hug him, Byron pushes her away, then turns to knock on the door to the attorney’s office. He feels Benny put a hand on his arm. He shakes it free. Benny stands there, her mouth open, but says nothing. And what right does she have to say anything? Byron hasn’t seen Benny in eight years. And, now, their ma is gone for good.

What does Benny expect? She took a family argument and turned it into a cold war. Never mind all that talk about societal rejection and discrimination and whatnot. It seems to Byron that whatever kind of problem you have in this world, you can find someone to show you understanding. And times are changing. There’s even been a study in the news recently about people like Benny.

The study says it can be a lonely road for people like her. But she won’t be getting any sympathy from Byron, no. Benedetta Bennett gave up that luxury years ago when she turned her back on her family, even though she claims it was the other way around. At least she showed up this time. Six years ago, Byron and his mother sat in the church across from his father’s coffin up in L.A. County, waiting for Benny to arrive, but no Benny. Later, Byron thought he saw his sister skirting the burial grounds in the back of a car. She’d be there any minute, he thought. But, still, no Benny. Only a text from her later, saying I’m sorry. Then silence. For months at a time. Then years.

As each year went by, he was less certain that Benny had been there that day or that he’d ever had a sister to begin with.

That he’d ever had a chubby, squiggle-headed baby girl following him around the house.

That she’d ever cheered him on at the national meets.

That he’d ever heard her voice sailing across the auditorium as he closed his hand around his doctoral diploma.

That he’d ever not felt the way he does right now. Orphaned and pissed as hell.

Her mother’s attorney opens the door and Benny looks past him, half expecting to see her ma sitting in the room. But it’s only Benny and Byron now, and Byron won’t even look at her.

The lawyer is saying something about a message from their mother but Benny can’t concentrate, she’s still looking at Byron, at the bits of gray in his hair that didn’t use to be there. What’s with the pushing, anyway? The man is forty-five years old, not ten. In all these years, her big brother has never shoved her, never hit her, not even when she was little and tended to pounce and bite like a puppy.

Benny’s first memory of Byron: They are sitting on the couch, she is settled under her brother’s arm, and Byron is reciting adventure stories to her from a book. His feet can already touch the floor. Byron stops to fluff Benny’s hair with his fingers, to pull on her earlobes, to pinch her nostrils shut, to tickle her until she is breathless with laughter, until she is dying of happiness.

Their mother has left them a message, the lawyer says. The lawyer’s name is Mr. Mitch. He’s talking to Byron and Benny as though he’s known them all their lives, though Byron can only recall meeting him one other time, when his ma needed help getting around town after her accident last winter, the one his friend Cable insisted wasn’t an accident. Byron walked his mother up to Mr. Mitch’s office, then went back outside to wait for her in the car. He was sitting there watching some kids skateboard down the broad, buff-toned sidewalks between one high-end chain store and the next, when a police officer rapped on his side window.

This kind of thing had happened to Byron so often over the course of his adult life that sometimes he forgot to be nervous. But most times, whenever he was approached or pulled over by an officer, he slid down into that space between one heartbeat and the next where he could hear his blood crashing through his body, a waterfall carrying centuries of history with it, threatening to wipe out the ground on which he stood. His research, his books and social media following, the speaking engagements, the scholarship he wanted to fund, all of it, could be gone in a split second of misunderstanding.

Only later, after the officer had opened the trunk of his patrol car and come back with a copy of Byron’s latest book (Could he have an autograph?), did it occur to Byron that a grown man of any color, sitting alone in a car watching pre-adolescents skateboard up and down the sidewalk, could elicit a reasonable degree of suspicion. All right, he could see that, it wasn’t always about him being a black man. Though, mostly, it was.

“Let me just warn you,” Mr. Mitch is saying now. “About your mother. You need to be prepared.”

Prepared for what? Their mother is already gone.

He doesn’t see how anything after that is going to make much of a difference.

There’s an entire file box labeled Estate of Eleanor Bennett. Mr. Mitch pulls out a brown paper envelope with their mother’s handwriting on it and puts it on the desk in front of Byron. Benny shifts her seat closer to Byron’s and leans in to look. Byron removes his hand but leaves the packet where Benny can see it. Their ma has addressed the envelope to B and B, the moniker she liked to use whenever she wrote or spoke to them together.

B-and-B notes were usually pinned to the fridge door with a magnet. B and B, there’s some rice and peas on the stove. B and B, I hope you left your sandy shoes at the door. B and B, I love my new earrings, thank you!

Their mother left a letter, Mr. Mitch says, but most of their mother’s last message is contained in an audio file that took her more than eight hours, over four days, to record.

“Go ahead,” Mr. Mitch says, nodding at the packet.

Byron cuts open the envelope and shakes out its contents, a USB drive and a handwritten note. He reads the note out loud. It’s so typically Ma.

B and B, there’s a small black cake in the freezer for you. Don’t throw it out.

Black cake. Byron catches himself smiling. Ma and Dad used to share a slice of cake every year to mark their anniversary. It wasn’t the original wedding cake, they said, not anymore. Ma would make a new one every five years or so, one layer only, and put it in the freezer. Still, she insisted that any black cake, steeped as it was in rum and port, could have lasted the full length of their marriage.

I want you to sit down together and share the cake when the time is right. You’ll know when.

Benny covers her mouth with one hand.

Charmaine Wilkerson is an American writer who has lived in Jamaica and is based in Italy. A graduate of Barnard College and Stanford University, she is a former journalist whose award-winning short fiction has appeared in various magazines and anthologies. Black Cake is her first novel. 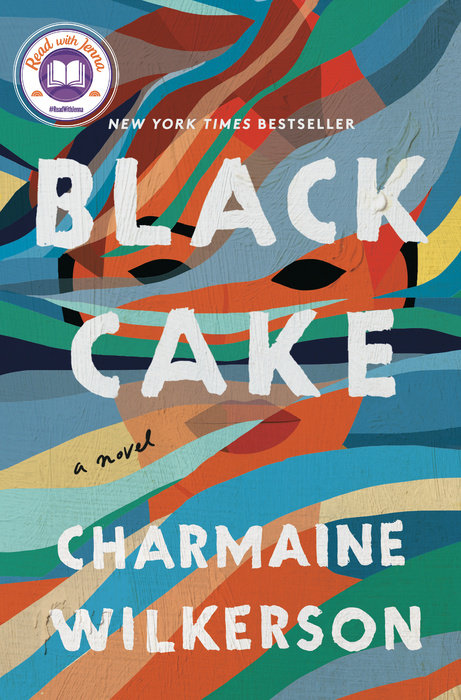