A Memoir of Love and Loss

“A pleasure to read . . . Rarely has a memoir about death been so full of life. . . . Bloom has a talent for mixing the prosaic and profound, the slapstick and the serious.”—USA Today

Amy Bloom began to notice changes in her husband, Brian: He retired early from a new job he loved; he withdrew from close friendships; he talked mostly about the past. Suddenly, it seemed there was a glass wall between them, and their long walks and talks stopped. Their world was altered forever when an MRI confirmed what they could no longer ignore: Brian had Alzheimer’s disease.

Forced to confront the truth of the diagnosis and its impact on the future he had envisioned, Brian was determined to die on his feet, not live on his knees. Supporting each other in their last journey together, Brian and Amy made the unimaginably difficult and painful decision to go to Dignitas, an organization based in Switzerland that empowers a person to end their own life with dignity and peace.

In this heartbreaking and surprising memoir, Bloom sheds light on a part of life we so often shy away from discussing—its ending. Written in Bloom’s captivating, insightful voice and with her trademark wit and candor, In Love is an unforgettable portrait of a beautiful marriage, and a boundary-defying love.

An excerpt from In Love

This trip to Zurich is a new, not quite normal version of something Brian and I love: traveling. Road trip, train ride, ferry ride, airplane anywhere. We like all travel and most shopping, and this trip to Zurich has all the accoutrements of our other trips and is also nothing like anything we’ve ever done. As we usually do, we take a car service to the airport so we can be fancy and also avoid the park-and-schlep, and even before Brian had Alzheimer’s, our combined lack of direction adds twenty minutes to all transportation transitions. We have a restaurant meal before our 6 p.m. departure. I buy a stick of lipstick and a small tube of hand cream; Brian buys some candy. We share gum. We share a bottle of water.

On the plane, we enjoy the settling in, the attention of the flight attendants, who already like us because Brian is mindful about his size and doesn’t swing his arm into someone else’s drink and he expresses appreciation to every single Swissair representative. We seem like people who will not be screaming for more booze or more peanuts at midnight. No one loves business class more than people who always fly coach.

We are smiling from the moment we board. I arrange our business-class pods; we are gushingly polite to the attendants. It’s obvious that we like each other and are happy to be traveling together. As soon as we get our beverages (in glasses!), we toast my sister and brother-in-law, who are paying for our business-class trip to Zurich.

Dignitas’s office is in Zurich, and that’s where we’re headed. Dignitas is a Swiss nonprofit organization offering accompanied suicide. For the last twenty-two years, Dignitas has been the only place to go if you are an American citizen who wants to die and if you are not certifiably terminally ill with no more than six months to live. This is the current standard in the United States, even in the nine right-to-die states plus the District of Columbia, about which many older or chronically ill Americans harbor end-of-life fantasies and which I researched, at Brian’s direction, until we discovered that the only place in the world for painless, peaceful, and legal suicide is Dignitas, in the suburbs of Zurich.

My sister had cried with me since the second appointment with the neurologist, when it took the doctor less than an hour to give Brian a mental-status exam and inform us that Brian almost certainly had Alzheimer’s and had probably had it for several years, judging by his high IQ, his struggles with balance and proprioception, and his poor performance on the exam. It took Brian less than a week to decide that the “long goodbye” of Alzheimer’s was not for him and less than a week for me to find Dignitas, at the end of several long Google paths. From summer to winter, my sister, Ellen, who loves me and loved Brian, did her best not to make suggestions, not to offer “if onlys,” not to say that maybe Brian’s Alzheimer’s wouldn’t be too bad or would progress very slowly, not to cry when I wasn’t crying, and not to pour out her own grief at the loss of one of her favorite people and our compatible foursome. (When they met for the first time, fourteen years ago, Brian went into Ellen’s kitchen with his winning ways and said, I really love your sister. My sister didn’t turn around. She said, Hurt her and I will kill you.) Ellen called me early one morning in December, when we were pretty sure that we’d cleared the hurdles for Dignitas, and said, Just tell me what you need. I said, reluctantly, Twenty thousand, and my big sister said, Here’s a check for thirty. We ended up spending every penny of it, between a couple of last big fishing trips for Brian, his not working, my not working, our eating out all the time, sometimes lunch and dinner, at the nicest restaurants in New Haven. We spent it on what was to be our last joint birthday celebration, and on four nights in the five-star hotel in Zurich and the car services and the tours of Zurich and my friend flying to and from Zurich to keep me company on the flight home, on whatever makes bad months bearable, plus the cost of Dignitas itself (around ten thousand dollars all in).

In our Swissair pods, Brian and I toast each other, and we say, Here’s to you, a little hesitantly, instead of what we usually say, Cent’anni (“May we have a hundred years,” a very Italian toast). There is no Cent’anni for us; we won’t make it to our thirteenth wedding anniversary.

We lean closer to each other and then we pull back, each of us fussing with our shoes and carry-ons, each of us opening our little gift bags from the airline and pulling out the socks (yes) and the eye masks (never) and the tiny toothpastes and tiny toothbrushes, which we persist in believing will delight the grandchildren, which they never do.

It is all nearly normal, like so much that we’ve done these last few years, like the flight itself and everything that precedes it—the trip to the airport, the TSA (our petty but deep pleasure at having TSA PreCheck, noting the much longer, shoes-off lines to the left of us), the pretty good meal at JFK. It all seems normal, except that I still remember how different it was to be together, to be with Brian, three years ago, when I didn’t hold my breath from the time he went off to the newsstand until he came back. From the outside, or some kind of inside (the one where I too have no memory of how we used to live our actual life), it is nearly normal.

For the trip to JFK, we didn’t use Arnold, the guy who always drives our car to the airport and returns it to our driveway. Arnold’s been driving us, and our kids and grandkids, for six years, and he has shared with us all about his love of motorcycles, his sobriety, and his wife’s health issues, to balance, I think, all the information he has about us, whether he’s wanted it or not. I could not bear to lie to Arnold about where we are going and I cannot bear to tell him the truth and I could not come up with a half-truth (the favorite technique of serious liars) about why we are going to Zurich in late January. For the skiing? For the ice fishing? For the Chagall windows in Fraumünster Church? I was afraid that Arnold would watch us sympathetically in the rearview mirror, and I could not bear it, for Brian’s pride and my general soft-boiledness, and just as I could not bear any harshness at all, I didn’t think I could take kindness, either. I wanted absolutely nothing, a blanket of indifference, and that was exactly what we got from the driver of our local limo service. He spoke once in the two-and-a-half-hour drive. Perfect.

At JFK, we stood mid–Terminal 4 and agreed on the restaurant, nicer than Shake Shack (which I love and Brian does not) but not as nice as the Palm steakhouse, which seems insanely high-priced, but as I’m writing this, I remember that we did go to the Palm, after all, because . . . obviously.

Brian ordered everything he wanted—and, it seemed to me, everything that anyone can imagine ordering—at the Palm steakhouse at JFK, except vodka on the rocks, which he had been mentioning wanting from time to time for the last year or so.

At the Palm, Brian ordered onion rings and a rare rib eye with a side of hash browns and a Caesar salad and garlic toast and he would have ordered a shrimp cocktail, except that I whispered, like the circa-1953 stage Jewish wife I seem to have become, missing only my home perm and rickrack-trimmed apron: Really? Shrimp in a steak place, in an airport? Brian shrugged, to say: I’m not that excited about airport shrimp anyway and, also, what’s the worst that could happen? I could have a bite, and it’s meh, and then I wouldn’t eat it. Waste of money, so what? I could die from bad shrimp, and wouldn’t that save us all a lot of trouble? Or I could get food poisoning and have to miss the flight. At this, he folded the menu and looked at me the way he often did now, with resigned understanding, fatigue, a little worn humor.

Amy Bloom is the author of four novels: White Houses, Lucky Us, Away, and Love Invents Us; and three collections of short stories: Where the God Of Love Hangs Out, Come to Me (finalist for the National Book Award), and A Blind Man Can See How Much I Love You (finalist for the National Book Critics Circle Award). Her first book of nonfiction, Normal: Transsexual CEOs, Crossdressing Cops and Hermaphrodites with Attitudes, is a staple of university sociology and biology courses. Her most recent book is the widely acclaimed New York Times bestselling memoir, In Love. She has written for magazines such as The New Yorker, The New York Times Magazine, Vogue, Elle, The Atlantic, Slate, and Salon, and her work has been translated into fifteen languages. She is the Director of the Shapiro Center at Wesleyan University.

A Memoir of Love and Loss 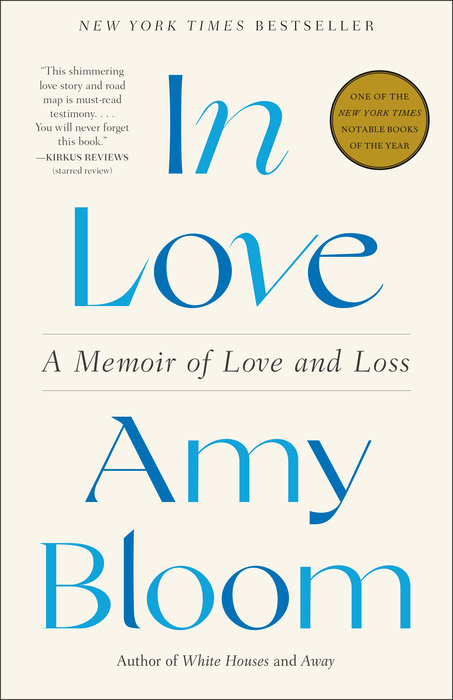