A people-pleasing baker tries to find her place as a bridesmaid-for-hire. Will she finally find her happily ever after—and her own voice?

ONE OF BUZZFEED’S MOST ANTICIPATED BOOKS OF 2022 • “A delightful debut, perfect for any person who’s ever created their own place to belong.”—Casey McQuiston, bestselling author of Red, White & Royal Blue and One Last Stop

Amy, a semicloseted queer baker and bartender in mid-2010s Oklahoma, has spent a lifetime putting other people’s needs before her own. Until, that is, she’s fired from her job at a Christian bakery and turns her one-off gig subbing in for a bridesmaid into a full-time business, thanks to her baking talents, crafting skills, and years watching rom-coms and Say Yes to the Dress. Between her new gig and meeting Charley, the attractive engineer who’s just moved to Tulsa, suddenly Amy’s found something—and someone—she actually wants.

Her tight-knit group of chosen family is thrilled that Amy is becoming her authentic self. But when her deep desire to please kicks into overdrive, Amy’s precarious balancing act strains her relationships to the breaking point, and she must decide what it looks like to be true to herself—and if she has the courage to try.

An excerpt from Queerly Beloved

Amy breathed a hefty sigh of relief, briefly dropping the customer-­is-­always-­right smile she’d had pasted on her face for the past eight hours. The digital clock on the bakery wall had finally hit noon, marking the end of her shift at Daily Bread, which meant she was only a five-­minute drive from collapsing into the worn flannel sheets on her bed.

Her fourth cup of coffee had hardly made a dent in her exhaustion. Even the cool November air rushing through the door as customers entered and exited couldn’t keep her alert. She’d been at Daily Bread since 4:00 a.m. with the rest of the kitchen shift, but unlike her fellow bakers, Amy hadn’t gone to bed early the night before. She’d hardly had a moment to shower between her start time at the bakery and her closing shift at Ruby Red’s. And that shower had been crucial. The smell inside Daily Bread was Amy’s favorite in the world: a combination of freshly baked bread, warm vanilla, caramelized sugar, and a touch of cinnamon. She usually arrived home with the scent absorbed deep into her clothes and hair. But Amy couldn’t rely on the bakery’s thick, sweet air to cover up the equally strong odor of beer and cigarette smoke that lingered whenever she left Ruby Red’s. She didn’t love the idea of her co-­workers judging her for being out late at a bar (which, here, they definitely would). But the main reason she needed to wash away any lingering smell was to make sure they never had a reason to wonder where exactly Amy had been.

When a co-­worker appeared to take over Amy’s position at the cash register, she gratefully stepped aside and returned to the kitchen to consult her pre-­clock-­out checklist. Amy headed toward the chalkboard that hung on one of the only wall spaces not covered by cabinets, above the time clock and several framed pictures of the bakery owner’s family. There were posed photos of a perfectly coiffed husband, wife, teenage son, teenage daughter, and golden retriever—­always forcibly reminding Amy of what she’d find if she googled “stock family photo”—­and a few candid shots of the kids playing various sports. Next to her name on the chalkboard, Amy found a note reminding her to frost and rebox a couple of cupcake orders before she left for the day. She sighed and wiped a sheen of sweat from her forehead with the crook of her elbow. At least it was a fun and relatively easy task. She could practically frost cupcakes in her sleep—­something she’d often claimed but might now have to prove, since she was all but sleepwalking after back-­to-­back shifts.

Amy located the two boxes of cupcakes assigned to her tucked among the shelves of unfinished special orders for birthdays, baptisms, baby showers, and Bible studies. Daily Bread was beloved among Tulsa’s Christians and especially among members of Tulsa’s biggest megachurch, where the bakery owner was a deacon. He was also a successful businessman and city council member known for loudly and publicly endorsing far-­right political candidates, and for his favorite catchphrase, “Jesus would have open carried.”

The store manager, Donna Young, was his wife. In true Oklahoma tradition, Donna was just as tough as her husband, but her meticulously applied layers of red lipstick and hairspray and her “bless your heart”–­isms often caused people to underestimate her. A former employee with a particular gift for sourdough had been shown the door after some good-­natured ribbing about Donna’s Methodist church choir placing third at a regional choir competition. All it had taken was one joke, one snide comment, and she had been out of a job. Amy, who loved a little friendly teasing, trod carefully around Donna after that.

So maybe Daily Bread didn’t have a float in Tulsa’s tiny annual Pride parade, but it was undeniably the best bakery in town. Everyone with a sweet tooth or a love of fresh pastries knew that Daily Bread was the place to go, and they were exactly the clientele Amy wanted to woo with her culinary magic, especially if she hoped to attract them to her own bakery someday.

Amy filled a piping bag with raspberry buttercream frosting and got to work. The bag felt like a natural extension of her arm as she swirled pink dollops atop the naked cupcakes. Ever since childhood, Amy had turned to baking when things got tough. She was fairly convinced baked goods could tell if she wasn’t giving them her full attention, so having a whisk and spatula in hand always seemed to clear her worried mind. Her mother’s cramped kitchen had had no room for bullies or money troubles or existential dread. And as an added bonus, it’s hard to hate someone who is always handing out homemade goodies. So over the years, Amy had concocted a recipe for just about every problem she’d encountered. Bad grade on a test? Peanut butter cookies. Messy breakup? Chocolate lava cake. Cousin telling you you’re going to hell for being gay? Lemon meringue pie. Total terror about figuring out what to do with your life? Well, that called for getting a job at Tulsa’s best bakery.

Amy had learned a ton about baking and business during her first year and a half in the kitchen at Daily Bread. Donna let her experiment with new recipes once she grew to trust Amy’s work. And a steady flow of customers meant better tips than she’d get at any other bakery in town—­even better than at the various server jobs she’d worked before she started at Daily Bread. That’s why Amy was willing to hide her personal religious beliefs (or lack thereof) to hold down her job there.

With the first order of cupcakes completed, Amy swapped the raspberry frosting for a piping bag of chocolate ganache and moved to the next box. Sometimes she felt guilty for staying closeted at the bakery, both because she was pretending to be someone she wasn’t and because she was allowing her colleagues’ homophobia to go unchecked. She felt worse for helping the Young family make more money, some of which they probably donated to harmful anti-­LGBTQ organizations and politicians. But a paycheck was a paycheck, and technically, with one of Ruby Red’s best bartenders on their payroll, the Young family was financially contributing to Tulsa’s queer community, even if they didn’t know it. Amy’s friends joked that she was the lesbian Robin Hood, stealing from the homophobes to pay the queers (mostly just herself). But she could assuage some of her guilt by knowing she was getting the best bakery training and experience Tulsa had to offer. Amy had lived her whole twenty-­five years in Oklahoma. Like any queer person living in a red state (even if it was 2013), she knew how to pick her battles—­especially after the battle scars she’d gained along the way.

After frosting the second order of cupcakes, Amy topped them with chocolate-­covered espresso beans and taped up the box. She placed the two shiny yellow boxes on a rack of special orders and then untied her apron, stifling a huge yawn. Finally, she was cleared for clock out. But just as she prepared to punch her time card, Amy heard the panicked voice of her co-­worker Leanne calling her name. Well, her Daily Bread name.

“Amelia! Thank God you’re still here.” Leanne burst through the swinging kitchen doors, gripping her cellphone in one hand. Amelia was Amy’s official name, but she had never really gone by it except on legal documents. When she’d filled out her application, she’d put her full name on the form, and she’d never bothered to correct her Daily Bread colleagues when they started calling her Amelia. Besides, responding to a different name served as a reminder that she was playing the role of a straight, churchgoing young woman.

Small droplets of sweat glistened around Leanne’s auburn hairline. “I just got a call from Connor’s school. He vomited in class, and apparently he’s running a fever. I’m sorry it’s such late notice, but any chance you can stay until six? Someone has to pick him up, but Dave is in a deposition and I can’t get a hold of my mom. It would be a lifesaver if you could cover for me.”

Internally, Amy screamed. She’d hardly sat down since walking into Ruby Red’s eighteen hours earlier. Taking over Leanne’s job at the cash register for the afternoon would mean working twenty-­four hours straight. Amy’s aching feet and back begged her to say no.

Susie Dumond is a queer writer from Little Rock, Arkansas. She is a senior contributor at Book Riot, where she writes a monthly Horoscopes and Book Recommendations column, as well as various quizzes, book lists, and bookish news pieces. Susie received a bachelor of arts from the University of Tulsa and a master of arts in public policy and women’s, gender, and sexuality studies from the George Washington University. Currently, she’s probably making cupcakes at her home in Washington, D.C., with her partner, Mary, her dog, Waffles, and her cat, Maple. 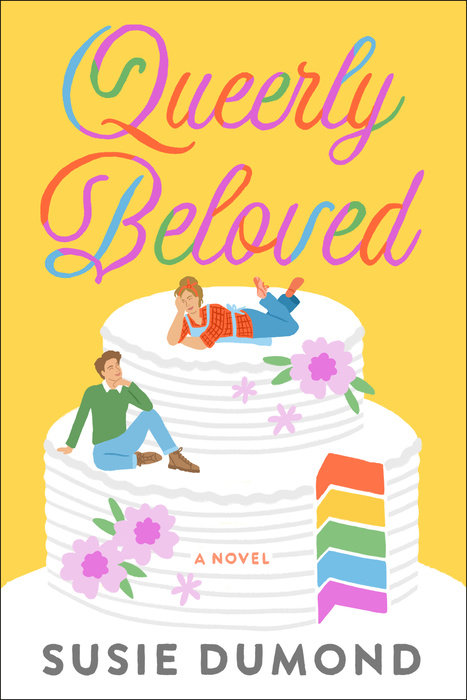