The Tragedy and The Glory of Growing Up; A Memoir

From actress and activist Evanna Lynch comes a raw and compelling memoir about navigating the path between fears and dreams.

Evanna Lynch’s casting as Luna Lovegood in the Harry Potter films is a tale that grew to almost mythic proportions—a legend of how she faced disordered eating as a young girl, found solace in a beloved book series, and later landed the part of her favorite character. But that is not the whole story.

Even after recovery, there remains a conflict at her core: a bitter struggle between the pursuit of perfection and the desire to fearlessly embrace her creative side. Revealing a startlingly accomplished voice, Lynch delves into the heart of her relationship with her body. As she takes the reader through a personal journey of leaving behind the safety of girlhood, Lynch explores the pivotal choices that ultimately led her down the path of creativity and toward acceptance of the wild, sensual, and unpredictable reality of womanhood.

Honest, electrifying, and inspiring, this is a story of the battle between self-destruction and creation, of giving up the preoccupation with perfection in favor of our uncharted dreams—and how the simple choice to create is the most liberating action a person can take.

An excerpt from The Opposite of Butterfly Hunting

‘Is this perhaps a bit cruel?’

This was the note that repeatedly cropped up in the margins from everyone who read or worked on the early drafts of this book—from my friends, family, editor, copy-editor, lawyer, doctor and also, very often, from myself. The cruelty of the words I’d written unsettled me but did not surprise me. And despite my own and my editor’s most mindful and considered efforts, this book remains, at times, kind of mean. So, I wanted to prepare you for that.

I knew it would be impossible to write a memoir about my journey towards self-love and acceptance without also writing an in-depth exploration of my self-hate. Too often in life—and in stories—we rush to find the happy ending, even if that ending is an artifice. We have this compulsion to turn every story into a fairy tale. People want to believe in fairy tales, I get that, and that childlike insistence on believing good things will happen is beautiful, and the ability to find the light in the midst of darkness is the mark of a truly resilient spirit. Absolutely, there is something admirable about our capacity to smile and present a brave face even when we are hurting. But I think there is also something else going on here, something a little bit sinister and concerning about our refusal to admit to anything other than perfect happiness, and I think it’s because we’re afraid of our own darkness. We’re afraid that if we fully surrender to our darkness, we’ll never come back from it. We’re afraid our darkness will go on and on and on, that there is no end to it and that we will get lost in it. We’re afraid that if we show these ugly, unpalatable parts of ourselves, it will be too much for others; that nobody will love and accept us, and we’ll be left alone with only the worst parts of ourselves for company. So, we don’t let ourselves get too deep into self-hate—at least, not in public. We hurry to slap on the happy ending and construct a heroic tale before the healing has even begun.

The thing is, I don’t believe this coping mechanism is the healthiest way of dealing with darkness. I’ve read articles depicting my life as a fairy tale even as I sat at home consumed by darkness, and those stories only compounded my feelings of isolation and disillusionment. And what I’ve found out is that darkness is not infinite, that you do actually get to the other side of it, but first you have to submerge yourself in it. You have to stop skating above the surface of your depths. You have to confront and accept this darkness in order to heal from it. This is why there are parts of this book where I had to submerge myself and the reader in moments of utter desolation. Why I had to be honest about the moments where it felt like every light had gone out.

I know that stories of eating disorders—such as the one I’m sharing in this book—can seem unendingly bleak, and therein lies our frenzied need to truncate the long road to recovery and rush to a place of positivity, a hearty commitment to self-love, but I think in doing so we gloss over the intense cruelty inherent within them; after all, the cruelty of eating disorders can literally starve a person to death. I’ve found, when reading other stories similar to mine, that the book often ends at the point where the person dissociates themselves from their disorder. They create a distance and step back, attributing all those dark, hateful thoughts neatly to this thing that’s been identified as a sickness. But personally, I found that even after my fixation on food and controlling my body had gone away, that darkness was still present—and, indeed, it had been there long before the eating disorder ever took residence in my mind. In so many ways, the anorexia was just a distraction. And—both in my healing journey and in writing this book—I wanted to get to the bottom of that darkness. I wanted to unpack it and understand what really was beneath this compelling distraction: an addiction not to thinness, but to negative thinking, to safety, to staying small in all ways so that I wouldn’t have to deal with the terrifying reality of fully living life. I wanted to submerge myself in this darkness for this book and find my way through it, because, ultimately, I do actually believe in fairy tales. Not the shallow, saccharine sort peddled by tabloids and short-lived self-help manifestos. I believe in the kind of fairy tales that have depth, complexity, profundity and moments of darkness that birth a fiercer belief in light; the kind where the endings are not endings but breakthroughs that lead to the next adventure. And my intention with this book was to shed light on a darkness that is most often obscured by myths, misunderstanding and sensationalism.

In order to tell the story with integrity, I had to discuss moments and thoughts that provide insights into the mind of someone with an eating disorder, and, certainly, many of these parts could be triggering to readers. That’s why, before you read any further, I need to highlight that this book explores a variety of sensitive topics, including eating disorders, self-harm, suicide, fat-phobia and self-hate in various other guises. I would advise any reader to use their personal discretion when reading this book, and to step away from it if it triggers unhealthy thoughts. I’m of the belief that when struggling with mental-health issues or the early stages of recovery, virtually everything is triggering, and the onus is on the individual and on their support system to identify the things that are disproportionately triggering, and to take precautions to avoid being bombarded by these things. I would advise you to do whatever feels best to you, and to keep reading only as long as this book feels eye-opening, inspiring or comforting, which I hope it is.

I was determined from the start that this book would not become a ‘how-to’ manual for eating disorders. For this reason, I’ve decided to omit any specific details of weight, calorie counting, and health statistics. I don’t feel they are relevant or necessary to tell this story, and any urge to include these details in any conversation around eating disorders is actually the voice of the eating disorder, which wants to provoke horror and awe, to be identified by a series of numbers and statistics, and to distract its audience from the deeper issues. I would go further and say that any publication or book that reveals the weight and calorie count of a person with an eating disorder does not serve the reader’s best interests, and personally I would avoid them. We need to stop playing so neatly into the hands of eating disorders by measuring people ’s sickness and health by the numbers on the scale. That’s a belief I stand by. There is mention of specific foods, the concept of ‘safe foods’ and ‘fear foods’, and descriptions of eating, but I have tried to keep these vague and have only included these details where they were relevant to telling the story. Once again, I hope you will use your discretion and skip any part that is triggering to read.

On a separate note, I’d like to mention that all names and identifying characteristics of doctors, nurses, hospital staff and of other young people I encountered in hospitals and clinics have been changed to protect their privacy. The hospital and clinic I attended have been given pseudonyms. All of the stories recounted are true, but a few times I have deliberately given a certain anecdote or moment to a different person in the story. This was done to further protect privacy. I’ve endeavoured to tell the story chronologically but, as you will see, the road to recovery is a difficult one to track, and there were a few times where it made narrative sense to alter the timeline of the actual events, though this was only done in a couple places.

Ultimately, this is a story of choosing creativity, love and a positive outlook on life, so I promise, however dark it gets at points, not to leave you in that place. I hope that by submerging readers in my darkness at times when it really felt like my situation was hopeless, this story will inspire in you the courage, vision and determination to confront your demons. More than anything else, I hope this story helps you find the lighted path out of your own darkness.

Evanna Lynch is an actress and writer. Her professional career began at the age of fourteen when she played the role of quirky misfit Luna Lovegood in the Harry Potter film series. She lives in London, where she divides her time between acting, writing and animal rights activism. The Opposite of Butterfly Hunting is her first book.

The Tragedy and The Glory of Growing Up; A Memoir 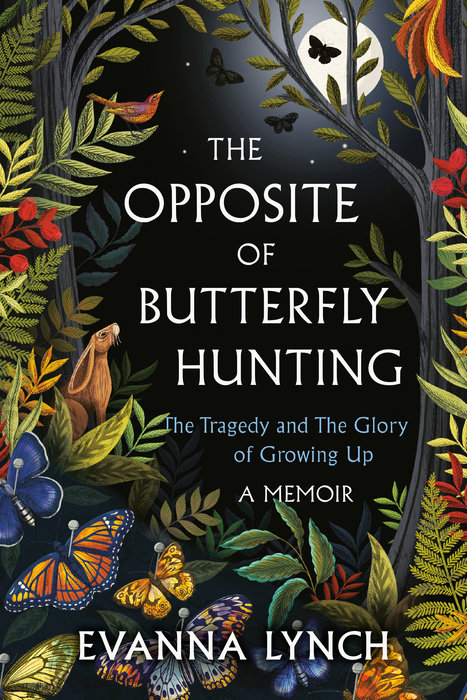