101 Easy Recipes to Pack Your Plate: A Vegan Cookbook

The creators of the New York Times bestselling cookbook series Bad Manners are back to deliver you the not-so-gentle but always hilarious shove you need to take the leap into healthy eating (previously published as Thug Kitchen 101: Fast as F*ck).

Bad Manners: Fast as F*ck includes more than 100 easy and accessible recipes to give you a solid start toward a better diet. They hold your hand and explain ingredients from chickpeas to nooch so you’ll feel confident knowing exactly what the f*ck you’re cooking. This kickass kitchen primer also serves up health benefits and nutrition to remind everyone, from clueless newbies to health nuts, how a plant-based lifestyle benefits our bodies, minds, environment, and pocketbooks. THAT’S RIGHT. EAT GREEN, SAVE GREEN.

So scared of commitment you can’t even dedicate some time to cook? Bad Manners is here to fix that sh*t: All recipes in Fast as F*ck are guaranteed to be faster than delivery, so you can whip up some tasty meals with simple ingredients regardless of when you stumble home from work. You’re too damn important to be eating garbage, so Bad Manners has made it easy to take care of #1: you. No needless nonsense or preachy bullsh*t. Just delicious, healthy, homemade food for all the full-time bosses out there.

An excerpt from Bad Manners: Fast as F*ck

Everyone’s busy, we f*cking get it.

Whether it’s working multiple jobs just to make rent or chauffeuring your whole damn family around, we’ve all got too much shit to do with limited time to do it. You’re not alone. We wrote this book to tackle the #1 excuse we hear from people about why they don’t cook: time. Everybody seems to have enough time to be caught up on their Netflix queue or the shitload of sports on TV, but when it comes to cooking for yourself, suddenly everyone’s too goddamn busy. Maybe you never learned and don’t know where to start, or maybe you know how to cook but your time management is garbage. Whatever your exhausted excuse might be, we’re here to call bullshit and give you some advice. You can’t write three cookbooks in three years without getting good at this schedule shit.

So listen up, we know what the f*ck we’re talking about.

The first step to finding time to cook for yourself is to stop thinking of cooking as an expendable part of your day. It's not.

You don’t throw your clothes away when they get dirty and just buy new ones because there’s no time to do laundry, right? F*ck no you don’t, and if you do, you’re an asshole. But that’s how tons of people treat mealtime. Fast-food companies rely on this myth of “intelligent time management” for your repeat business and that shit has served them too well for too long. Dining out makes up nearly one-third of the energy intake by US adults each year and the nutritional quality of that food is almost always significantly lower than food prepared at home. So basically we’re all eating the nutritional equivalent of Styrofoam for a third of our meals but we’re still wondering why we have all these goddamn health problems. Go f*cking figure.

In 1929, away-from-home food consumption was only 13% of the average US household’s budget. By 2012, that amount had shot up to 43%, which corresponds to the rise in diabetes, heart disease, and obesity in the United States since the 1970s. And don’t start with that “but it’s always been like this” bullshit. McDonald’s first drive-thru opened in 1975, so we’ve got plenty of time to reverse this eatery epidemic before it becomes an ingrained way of life. If we changed once, then we sure as shit can change again.

We can already hear you saying, “but it’s cheaper than cooking at home!” Well we don’t know what the f*ck your budget is like but feeding a family of four at McDonald’s costs an average $28 per visit and ya know goddamn well there ain’t any leftovers. For $30 you could make most entrees in this book with a side or a big salad and have enough left over to eat for another one to two meals.

So it shouldn’t be any surprise that it’s mostly the middle and lower-middle classes who frequent fast-food and sit-down restaurants, not the poor. Study after study has found that the number of visits to fastfood establishments actually rises directly alongside income. This is not a “them” kind of problem, this is an “all of us” problem, and the sooner people own up to shitty food habits, the better. You can act like money ain’t a thing, but to most of us, money is very much a thing.

As you’d expect, fast-food restaurants are only interested in your wallet. Your health and waistline mean f*ck all to them. They’ll keep peddling shitty food under the guise of efficiency until customers stop lining up to buy it and start cooking at home. The people who dream up the new items that land on fast-food menus are not chefs or dieticians. THEY’RE. MOTHER. F*CKING. MARKETERS. They want you to order their newest, most ridiculous sounding meal, talk about it on social media, and then just keep buying that garbage until they scheme up the next dish to push the limits of good taste and caloric density. The Doritos Locos Taco from Taco Bell is the best example of this. That travesty of a taco made over $375 million in its first year on the market. That one taco-pocalypse made Taco Bell more than 7,000 times the average household income in the United States in one goddamn year. ONE. DAMN. TACO. The over-the-top ad campaign, branding, name, and addictive tastes are all designed for one reason: to make those rich motherf*ckers even richer.

So stop handing over your hard-earned cash to those shitlords and start rewarding yourself with some of the best meals you’ve eaten in a long time.

Get on Team You. You work hard and deserve a diet that will support your asskicking lifestyle, not food that’s gonna cause you to self-sabotage. If you’re like us, you don’t need any help with that shit.

Most people who dine out frequently don’t realize that businesses have manufactured their meals specifically to keep consumers coming back for more. Customers have had their taste buds sandblasted to shit by the aggressive amounts of sodium and sugar that get packed into commercially prepared meals. People in this country consume 2,000 to 8,000 milligrams of sodium a day when they shouldn’t have more than 1,500. HOLY F*CKING FRENCH FRIES. GUYS?! ARE YOU OKAY?!

Let’s table all the unhealthy side effects of that shit because that’s in our other books, Bad Manners: Eat Like You Give a F*ck and Bad Manners Party Grub, and let’s talk about how you’re f*cking with your palate. When you suck down that much sodium on the daily, you’re f*cking up your ability to enjoy healthier foods. Too much salt overstimulates your taste buds and then you can’t taste the subtle flavors in food anymore, especially fruits and vegetables. Ya know, the kinda shit we should be eating. Without realizing what’s happened, people combat the dulling of their palates by reaching for the saltshaker, making the whole goddamn problem even worse. And when most healthy food is bland and spiceless, nobody’s craving that shit. And that’s exactly what these fast-food companies want. It’s tough eating at home when everything tastes like flavorless mush.

And it’s the same damn thing when it comes to sugar. The average American eats 2 to 3 pounds of sugar per week. That’s at least 1 cup of sugar a day. Walk into your kitchen right now and measure out a cup of sugar, then take a hard look at that shit knowing you’re probably eating one of those every day. It’s not entirely your fault though. Sugar sneaks its way into every commercially prepared food like bread, salad dressings, and pasta sauces in addition to the cookies and other sugary shit that we already obsess over. Sugar has the same effect on the palate as salt, so we crave sweeter and sweeter stuff to achieve the same kind of satisfaction that we used to get from a ripe peach. This has gotten out of hand and we gotta take back control of what goes into our food before we start just licking sugar and salt off rocks like a bunch of goddamn goats. It’s not a good look.

Even just getting in the kitchen is gonna help your overall health. It’s really that easy. Don’t just trust us because we’re Internet famous.

Bad Manners blew up the Internet back in 2012, when they first began blogging. Their first cookbook was a #1 New York Times bestseller. They are based in Los Angeles, California.

101 Easy Recipes to Pack Your Plate: A Vegan Cookbook 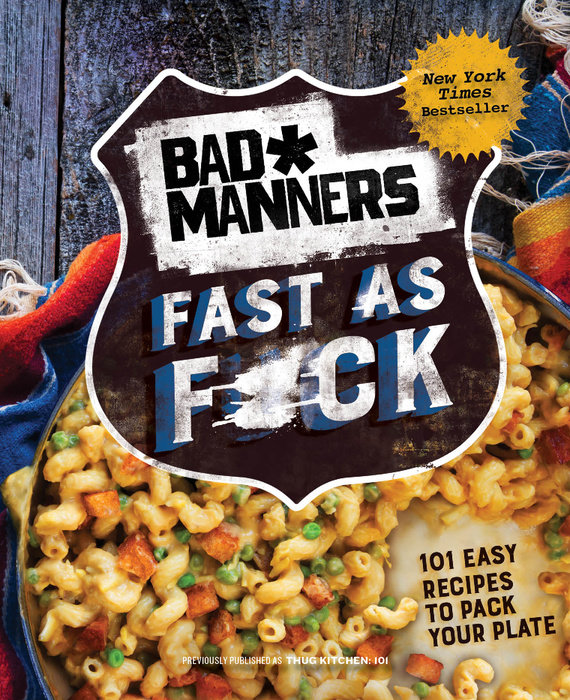