A “hilarious, tender, raw, and heart-stoppingly moving” (Amanda Eyre Ward) debut about a down-on-his-luck gay man working out how he fits into the world, making up for lost time, and opening himself up to life’s possibilities

“Fry brings a refreshing voice to the queer coming-of-age novel with characters whose stories don’t revolve around trauma. Instead, everyday experiences are portrayed with drama and delight.”—The Washington Post (New & Noteworthy)

Danny Scudd is absolutely fine. He always dreamed of escaping the small-town life of his parents’ fish-and-chip shop, moving to London, and becoming a journalist. And, after five years in the city, his career isn’t exactly awful, and his relationship with pretentious Tobbs isn’t exactly unfulfilling. Certainly his limited-edition Dolly Parton vinyls and many (maybe too many) house plants are hitting the spot. But his world is flipped upside down when a visit to the local clinic reveals that Tobbs might not have been exactly faithful. In fact, Tobbs claims they were never operating under the “heteronormative paradigm” of monogamy to begin with. Oh, and Danny’s flatmates are unceremoniously evicting him because they want to start a family. It’s all going quite well.

Newly single and with nowhere to live, Danny is forced to move in with his best friend, Jacob, a flamboyant nonbinary artist whom he’s known since childhood, and their eccentric group of friends living in an East London “commune.” What follows is a colorful voyage of discovery through modern queer life, dating, work, and lots of therapy—all places Danny has always been too afraid to fully explore. Upon realizing just how little he knows about himself and his sexuality, he careens from one questionable decision (and man) to another, relying on his inscrutable new therapist and housemates to help him face the demons he’s spent his entire life trying to repress. Is he really fine, after all?

An excerpt from First Time for Everything

Usually when someone’s fondling my balls, I disappear. I try to pretend it isn’t happening. The whole thing makes me so uncomfortable I don’t know what to do, so I just vanish. Mostly they don’t seem to notice, I think. But on this occasion I’m having to answer questions, which makes it trickier.

“And is this a monogamous relationship, duckie?” the middle-aged Irish lady is asking. I wince as her thumb slips probingly around the tender bit of the left testicle.

“Yes, of course,” I say to the beige-tiled ceiling. Why does everyone keep asking me that? It’s just a normal relationship, like any other. “Can you feel the lump? Does it feel bad?”

“And are you top or bottom?”

“That’s a very personal question. I don’t really see why it’s relevant.” She sets me with a look. “The GP just said I had to come here because of—you know—the area.”

My heart is thrumming in my neck. This is maybe the worst place I’ve ever been. I’m never coming back.

“We ask these questions to everyone—to get a better idea of your sexual history.”

I nod toward my crotch.

Her blue-plastic-gloved hand—the one that’s not currently keeping my scrotum hostage—lands on my arm and squeezes gently. It’s strange to be held in this way, even for a moment—oddly comforting.

“I won’t be sharing this with anyone, dear. Everything you say is confidential.”

I can’t bring myself to look directly at her, or where either of her hands is, so I focus on my lightly haired, startlingly white thighs. Then on my calves, then on my ankles, where the navy Topman boxers sit loosely inside the scrunched-up cave of my pulled-down jeans.

I make a coughing, wheezing sort of noise and see that I’ve actually sprayed several flecks of spit onto the front of my pale-blue cotton shirt. My face heats up, even though the nurse hasn’t noticed and wouldn’t care anyway. She must see hundreds of scrotums a week. And globules of startled spit.

I try to get it together.

“No,” I say, as evenly as possible. “I’m just really not into contact sports.”

“Any GHB, GBL, mephedrone, or general recreational drug taking?” she goes on.

“No.” Then I think. “What about coffee? Sometimes I have, like, three oat-milk lattes a day and I feel a bit”—I shake my head from side to side—“floopy.”

I shake my head. She’s lost me now.

She gives Old Lefty another good squeeze. I make a “Gah!” noise.

“Ooh, sorry there, dear,” she says, almost sings. “And do you use condoms?”

Oh, so we are still talking about sex.

“Yeah, I’m not an idiot,” I say very quickly—too quickly. My tongue is dry. I swallow loudly and listen as the lie comes out. “Well, we use them most of the time. But, like, a few times we’ve been a bit drunk, or it’s the morning and it just sort of . . . happens. But it doesn’t matter, because Tobbs would never cheat on me.”

I really can’t remember the last time we used a condom—maybe eight months ago?

I glance up. This time her stare is focused and intense.

“Do you often take risks like this?” she says in a low, serious voice.

“I’m in a monogamous relationship.” I hear this come out much more West Country than I would like. I’m an urban professional now, not the son of a couple who run the chippy’s in the arse-end of nowhere. I take a breath, I try to flatten my “r”s and shorten my “a”s. “And I don’t see what this has to do with, with . . . whatever’s going on down there. This is . . . something else.”

The woman looks up. Jacqueline is her name, the laminate badge spearing her pendulous bosom informs me. I’ve been in too much of a whirl to notice anything until now, when this sudden, vivid realization that I’m here, actually here, shakes my vision. This tiny square room I’m in with this woman, her frizz of dyed magenta hair beautifully illuminated by the blue computer screen on the desk behind her, giving her an oddly religious aspect. I really am here, me, Danny Scudd, the most sexless man in all existence, spending Friday afternoon in the STI clinic, the place I’ve always avoided, because there didn’t seem much point in coming.

I look up at Jacqueline, looming over me like a disheveled Madonna. I feel bad news coming, not in my gut, but in my ball.

“There’s something there, though, isn’t there? A lump?”

She stands up, bins the blue gloves. She has a nice face, but it’s tired, drooping like a St. Bernard’s. She must be in her late fifties, around my mum’s age. I imagine the bleached barrel that is Mary Elizabeth Scudd spending eight hours a day inspecting young men’s bits, and then coming out with a word like “boggy.” She’d probably love it.

“Oh, heavens, no!” Jacqueline leans in and winks at me. I get a powerful waft of supermarket-bought geraniums. “The bad ones don’t hurt, and if it was cancer I’d feel a lump like a small hard pea attached to the testicle. What we’ve got here is either gonorrhea or chlamydia. Rejoice!”

“Ohhh!” Is this something to rejoice about? That sounds pretty serious to me. I have an impulse to take out my phone and text my best mate, Jacob. In fact, I wish they’d been able to come with me; it would have made this awful experience slightly less traumatic. “Does that mean I can’t have kids?”

Jacqueline blinks at me a couple of times.

“Now, wherever did you get that idea from?”

She shakes her magenta halo. “You’re all right, treacle. Never you worry.”

I lean up awkwardly on one elbow, trying to see what she’s really thinking.

“Are you sure it’s not cancer?”

Jacqueline smiles to herself, some emotion I can’t quite work out.

“It’s not cancer, dear. Not even close.”

She turns and goes over to a little plastic trolley, opens and closes its drawers, fiddles with packets of things. I notice for the first time that she’s wearing Crocs, also magenta, a color that really fights with the pale-green scrubs.

I lie back on the white bed, pants and trousers still around my ankles, the low buzz of the striplight seeming to get louder and louder. There’s so much spinning around my head I don’t know which thought to settle on. What does this mean? What does any of this mean?

“Oh yes!” she laughs. She actually laughs. Doesn’t she realize this exchange is scarring me for life? “We’ll run some tests now, as well as treat you for both.”

She’s standing above me again, this time brandishing a needle.

I do not move. She smiles again, though with less patience.

I roll around like a giant worm, taking care not to knock the boggy balls. I stick my bare arse up in the air, wondering if this was indeed how I ended up here in the first place.

My eyes are scrunched shut and every muscle I have is tensed as the pain centers in the middle of my right cheek.

“Try to relax,” Jacqueline says, in vain. Next thing I know, she’s tapping me on the shoulder. I jiggle back around, my feet still trapped in the boxer-jean shackles.

Jacqueline laughs with such force I press myself back against the plastic bed, which rattles unnervingly.

“Oh dear, you boys do make me laugh,” she says, thumping her rib cage. I ignore “you boys.” But I know what she means, of course.

Henry Fry is an award-winning writer, designer, and climate and LGBT rights activist. First Time for Everything is his first novel. 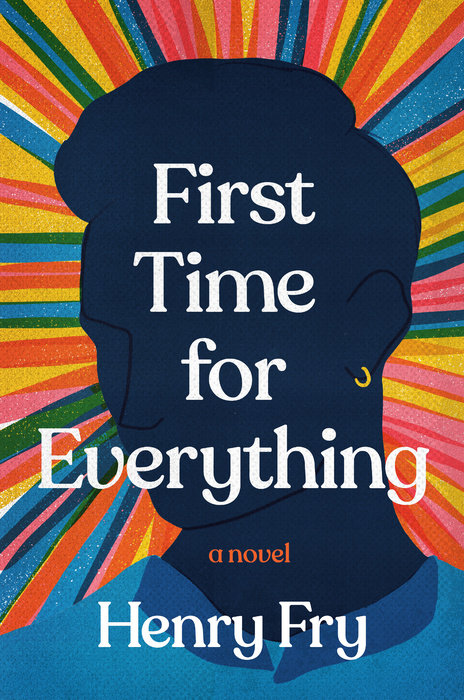