“Lush with secrets, magic, and a past that won’t stay where it belongs, this novel is (quite fittingly) spellbinding.”—JODI PICOULT, author of Wish You Were Here

Emery Blackwood’s life changed forever the night her best friend was found dead and the love of her life, August Salt, was accused of murdering her. Years later, she is doing what her teenage self swore she never would: living a quiet existence on the misty, remote shores of Saoirse Island and running the family’s business, Blackwood’s Tea Shoppe Herbal Tonics & Tea Leaf Readings. But when the island, rooted in folklore and magic, begins to show signs of strange happenings, Emery knows that something is coming. The morning she wakes to find that every single tree on Saoirse has turned color in a single night, August returns for the first time in fourteen years and unearths the past that the town has tried desperately to forget.

August knows he is not welcome on Saiorse, not after the night everything changed. As a fire raged on at the Salt family orchard, Lily Morgan was found dead in the dark woods, shaking the bedrock of their tight-knit community and branding August a murderer. When he returns to bury his mother’s ashes, he must confront the people who turned their backs on him and face the one wound from his past that has never healed—Emery. But the town has more than one reason to want August gone, and the emergence of deep betrayals and hidden promises spanning generations threaten to reveal the truth behind Lily’s mysterious death once and for all.

An excerpt from Spells for Forgetting

There were tales that only the island knew. Ones that had never been told. I knew, because I was one of them.

I stood at the bow of the ferry as Saoirse emerged from the mist like a sleeping giant tucked into the cold waters. The biting wind had numbed my fingers clutched around the railing and they tightened as I swallowed. I’d imagined that moment a thousand times, even on days that I wasn’t completely convinced the island had ever existed. But there it was, as real as the skin that covered my bones.

I tucked my hands into the pockets of my jacket, turning my back to the sight of it. As if that would somehow erase all the darkness that had happened there. The last time I’d stood on the deck of that ferry, I was eighteen years old, and instead of watching it grow bigger in the distance, I’d watched it disappear, along with the life I’d lived there. My mother had kept her face turned away from me just enough to hide the tears striping her reddened cheeks, but I could feel in the center of my chest the words she wasn’t saying. That I’d f***ed everything up. And that deep down, she would never forgive me for it.

My eyes dropped heavily to the pack at my feet, where the smooth emerald face of the urn was visible through the cinched opening. Even in those final days, she’d never spoken a word of any of it. We swore we’d never go back to Saoirse, and we hadn’t. That was one of many promises we’d kept. So why, after all these years, had she broken it?

The only answer to that question was one I couldn’t stomach.

“Sir?” The voice was half drowned in the wind pouring over the deck and I blinked, squinting against the blinding morning light. A woman buttoned up in the heavy nylon coat that bore the emblem of the ferry charter stood before me, hand extended and waiting. “Your ticket?”

“Oh, sorry.” I reached into the bag slung over my shoulder, rooting around until I found it.

Her hand brushed mine as she took the ticket, reading the stamp that marked the date and time.

“Headed home?” Her pink nose stuck out from over the collar of the coat, her voice muffled.

The word was like ice in my throat. Home.

“What?” I stiffened, searching her face for any hint of recognition. But she was several years younger than I was, probably more. If she was from Saoirse, she wouldn’t know my face. She definitely wouldn’t know my name—not the one on the ticket.

I cleared my throat, slipping the paper into my pocket. “I’m just visiting.”

The island wasn’t home, even if it once had been. And she was right. No one came to Saoirse to stay.

Though her mouth wasn’t visible behind the scarf, I could see the frown in her eyes and the look edged too close to suspicion. I’d been given that look many times before.

“Well”—her gaze trailed over my jacket and down to my boots before snapping back up to my face—“enjoy your trip.” There was a stiff uneasiness in the way she stepped around me, following the railing down the deck.

Beyond her, the island was now a sharp figure against the sky. A pair of white gulls glided over jagged black cliffs, catching the freezing wind that had carved the land into the shape of hungry teeth. It didn’t matter how many years had passed, the memories hadn’t faded.

I’d grown up being told that the people on the mainland were different from us, but living among them was the first time I really understood it. Mom had gotten better through the years at blending in and appearing at first glance like other mothers. But she still spent the equinox in the woods and the solstice at the sea. She still whispered old words over her teacups and I’d caught her muttering a curse as we passed the front door of our neighbor’s house more than once.

It was clear almost as soon as we left Saoirse that she didn’t want to talk about the island. That those years would be locked away in some secret place we pretended didn’t exist. It wasn’t the first time I’d broken my mother’s heart. It wasn’t the last, either.

In a blink, a single moment, every summer in the orchard, every storm over the dark sea, every night in the fishing cabin was entombed inside me like a body beneath a shroud, sealed away from the sunlight. It was for that very reason that I hadn’t believed it when I read the handwritten letter folded into the will, just days after I watched my mother take her last breath.

After so many years of staying away, of never speaking of the place, she’d parted this world with only one wish—that her ashes be buried on Saoirse Island.

It had taken me four months to actually book a flight to Seattle so I could make good on her request. I’d closed the window shade as we landed, my heart in my throat. I didn’t want to see the listless chain of black islands in the distance or the silvery blue of the water that only existed in the Sound. There were things that the taste of the salt-laced wind resurrected, whether I wanted it to or not, and I was already dreading the months or years it would take to put those memories back to bed.

My phone buzzed beneath my jacket and I pulled it from my back pocket, squinting as I read Eric’s name on the screen. I let out a heavy exhale before I picked up my pack, hauling it onto one shoulder. I tapped to answer.

I pushed through the doors to the ferry’s linoleum-floored cabin, where green bucket seats were set in fixed rows. Behind the counter in the corner, a short man with a stained white apron draped over a thick fleece stood awkwardly, watching me over a stainless-steel coffee maker.

“Just about.” I ducked low to glance out the hazy window, where the sunlight was a smear of white on the scratched glass.

“Well, I got your message. All you’re really looking for is any important paperwork that might have been left there. You’ll need the deed to the house in order to sell it. Titles, marriage licenses, bank accounts, whatever. And we need to get someone local to handle the sale unless you want to get stuck going back and forth to deal with all of this.” Eric’s gruff voice on the other end of the line was a tightly pulled tether between this world and another—my simple life in Portland and my less than simple history on Saoirse. “Any other loose ends there?”

I bit down, following the stark outline of the island with my eyes until it disappeared into the sea. There were a hundred different ones I could think of, but only one I gave a shit about.

“No. The orchard was taken care of in Henry’s will.” I answered, my voice catching just slightly on my grandfather’s name. I hadn’t spoken it in years. “It’s just the house. Maybe a few pieces of old farm equipment left on the property or something.”

“When do you have to be back to class?”

Class. I hadn’t thought about my classroom on campus for weeks, and the view of the orange-hued wooden risers in the light streaming through the tall arched windows made me feel even farther away. “Not until next semester. I took a leave to take care of my mom.”

“That’s right.” His tone shifted just slightly. “Well, get all of this sorted and then get the hell out of there.”

“That’s the plan.” I breathed, eyeing the windblown faces that filled the deck outside. It was almost the end of the season, but there were still dozens of tourists on the early ferry, headed for the orchard. “And Eric?”

I lowered my voice. “Thanks for your help with all of this.”

“Pretty handy when your college roommate turns out to be a lawyer.” He half-laughed. “Anyway, I’m sure I owe you for one thing or another.”

But he wasn’t just a college roommate. He was a friend. Maybe the only one I had. He was also the only person I’d ever told about Saoirse Island, even if I’d never uttered a word about what happened there. “I mean it. Thanks.”

“Sure thing.” The door opened again as I leaned into it, and I swallowed hard when I spotted the tipping masts of the boats in the harbor. “Better go. I’ll probably lose service any minute.”

“See you next week.”

The ferry horn rang out as I hung up, and I pushed back out onto the deck. Below, the bow of the ship was carving through the dark blue sea, churning up a splitting trail of white foam on either side of the vessel.

I wanted to hate my mother in that moment, as I felt the deep grow shallower, the island creeping closer. I wanted to be angry or think her selfish for sending me back here. But I owed her this. After everything, the very least I owed her was this.

A few days, and then I was gone. I could turn my back on the island like I had fourteen years ago. But this time, I would never go back. I’d lived enough years now to know that there were some ghosts that haunted you forever.

Saoirse had secrets, yes. But so did we.

Adrienne Young is the New York Times and USA Today bestselling author of the Sky in the Deep duology and the Fable series. Her books have been published in over twenty-five countries. When she’s not writing, you can find her on her yoga mat, on a walk in the woods, or planning her next travel adventure. She lives and writes in the Blue Ridge Mountains of North Carolina. 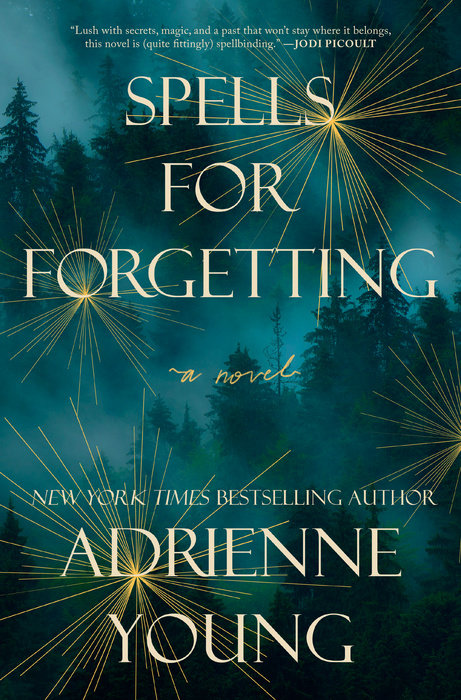