A talented Hollywood starlet and a reclusive A-lister enter into a fake relationship . . . and discover that their feelings might be more than a PR stunt in this sexy debut for fans of Beach Read and The Unhoneymooners.

Grey Brooks is on a mission to keep her career afloat now that the end of her long-running teen TV show has her (unsuccessfully) pounding the pavement again. With a life-changing role on the line, she’s finally desperate enough to agree to her publicist’s scheme: fake a love affair with a disgraced Hollywood heartthrob who needs the publicity, but for very different reasons.

Ethan Atkins just wants to be left alone. Between his high-profile divorce, struggles with drinking, and grief over the death of his longtime creative partner and best friend, Ethan has slowly let himself fade into the background. But if he ever wants to produce the last movie he and his partner wrote together, Ethan needs to clean up his reputation and step back into the spotlight. A gossip-inducing affair with a gorgeous actress might be just the ticket, even if it’s the last thing he wants to do.

Though their juicy public relationship is less than perfect behind the scenes, it doesn’t take long before Grey and Ethan’s sizzling chemistry starts to feel like more than just an act. But after decades in a ruthless industry that requires bulletproof emotional armor to survive, are they too used to faking it to open themselves up to the real thing?

An excerpt from How to Fake It in Hollywood

Grey Brooks almost didn’t hear the timid voice behind her. She had slipped into a trancelike state while staring at the coffee shop menu, weighing the wisdom of a medium versus large cold brew: did she merely want to spend the next few hours uncomfortably jittery, or was she in the market for a full-­blown caffeine-­induced panic attack?

She shifted in her clogs and didn’t react. They probably weren’t talking to her. Lucy was a fairly common name. She’d finally broken the embarrassing habit of whirling around expectantly every time she heard it, and she wasn’t about to relapse now.

Grey’s eyes flicked over the other inhabitants of the coffee shop. It was sparsely populated, with only a few tables occupied. Still, it was possible that Lucy was the stylish woman sipping an Americano and flipping through Variety over by the ficus.

The voice spoke again, louder and closer this time.

Well, that settled that. Grey pushed her sunglasses to her forehead and plastered on a toothy smile as she turned to face the voice: a bespectacled teenage girl clutching a blended iced mocha (extra whip). The girl’s mouth dropped open when their eyes met.

“Hey! How’s it going?” Grey made her tone as warm as possible. The girl covered her mouth with her free hand and squealed. A few heads turned at her outburst.

“Ohmigod, it is you! I’m sooo sorry to bother you, I know you’re just, like, trying to live your life or whatever. I just—­I’m literally obsessed with Poison Paradise. I’m such a big fan.”

The first time Grey had been called by her character’s name, it thrilled her. The next few times, it had bruised her ego a little. Now, six seasons and 132 episodes of Poison Paradise later, she took it in stride. It was better than not being recognized at all.

“Thank you, that’s so sweet! Do you want a selfie?”

The fan’s eyes looked like they were going to pop out of her head as she nodded, fumbling through her purse for her phone and swiping the camera open. Grey looped an arm over the girl’s shoulder as they grinned at the screen. She snapped a couple of pictures, then scrolled back through them to make sure they were satisfactory.

“Should we do a fun one?” Grey suggested. The girl nodded again and stuck her tongue out as Grey crossed her eyes.

“Thank you soooo much,” the fan breathed, overwhelmed, as she slid her phone back into her bag.

“My pleasure. What’s your name?”

Grey laughed. “Don’t worry about it.”

“It’s just, like, I feel like I grew up with Lucy, you know? Like, I started watching the show when I was in, like, elementary school. You were, like . . . my big sister.” Kelly turned her face up at Grey with a look of such naked vulnerability that Grey’s heart ached a little. She felt guilty for being annoyed at the interruption.

“Thank you. That really means a lot. She kind of felt like my sister, too.”

“So what are you doing now that it’s over?”

Over. It had been eight months since the last episode of Poison Paradise aired, but the reminder still sent a jolt of anxiety through Grey’s body. The teen soap had its share of devoted fans, and pulled in solid enough ratings on its small cable network to keep getting renewed, but had never achieved the mainstream crossover success that Grey had naïvely hoped for back when she shot the pilot. Sure, she’d worked a little in between seasons—­a bad studio slasher here, a Hallmark Christmas movie there—­but her last few auditions had gone nowhere. In her most self-­pitying moments, sweating in her bed in the middle of the night, she worried her career was in the same place it had been before she booked the show—­only now she was seven years older. Seven years she could not afford to lose.

“Oh, you know, I’m just taking some time for myself right now.” She saw the disappointment creeping over Kelly’s face and hastily added, “But I do have a few things coming up that I can’t really talk about yet. Too early.” She winked, then immediately felt embarrassed. Who winks? Lying made her corny.

It worked, though. Kelly beamed.

“That’s so awesome! I literally can’t wait. You’re so talented.”

Grey suddenly felt very tired. She still hadn’t ordered her coffee. “Thanks. It was really nice to meet you, Kelly.” She flashed her another smile and turned back toward the menu. Kelly squeaked out a few more words of gratitude before scurrying back to her friends, who were doing a terrible job of pretending not to watch intently from a corner table. They broke out in excited giggles and whispers as soon as she joined them. Every now and then one turned to steal a look at Grey before quickly ducking her head back down to confer with the group. They reminded her of a pack of oversized gophers.

Before Grey had a chance to approach the barista, another stranger sidled up and blocked her path. This time it was a scrawny guy in his late thirties, who had been watching her interaction with Kelly from a nearby table.

“Um . . . sure, no problem.” Grey had long ago learned not to be surprised at the variety of people outside the target teen demographic who watched Poison Paradise—­and were champing at the bit for the opportunity to tell her, in detail, how ashamed they were for enjoying it. Still, the odds were against her running into two of its fans in such quick succession. Maybe he knew her from that stupid horror movie where she’d been in a bikini the whole time, but those guys usually directed their whole conversation at her (not especially substantial) tits.

She smiled and leaned in as he snapped the picture. Grey steeled herself for more small talk, but he just thanked her and quickly crossed to his friend waiting by the door.

They spoke in hushed voices, but Grey heard their conversation clearly as they left the shop.

Grey flushed. She felt her chest tighten in humiliation. She gave herself exactly three seconds to be upset: Three. Two. One. She took a deep breath, squared her shoulders, and strode up to the barista.

Coffee in hand, Grey settled into one of the turquoise upholstered chairs and pulled out her laptop. Kamilah had sent back the next draft of their script in the middle of the night and Grey hadn’t had a chance to look at her revisions. She opened the screenplay to the title page:

Based on the novel by P. L. Morrison

Before Grey could get any further, her phone buzzed. Her agent, Renata. She quickly swiped to answer the call, careful to keep her voice hushed in the quiet coffee shop.

Renata’s voice came blaring through the phone as loudly as if she’d been on speaker.

“Where are you, honey? Are you alone? Can you talk?” Grey had signed with Renata within a few months of moving out to L.A. Her previous agent in New York had been old as the hills, bald as a newborn, and delivered every piece of news, good or bad, with the hangdog inflection of someone informing her of the death of her entire immediate family.

Renata, on the other hand, was loud and glamorous in an eighties Business Bitch sort of way, with a cloud of teased red hair surrounded by an even larger cloud of Marlboro Light smoke. She’d assigned Grey more pet names over the course of their first meeting than Grey had heard from her own mother in her entire life. Grey had adored her instantly, and the feeling was mutual. Over the years Grey had known her, Renata had kicked the Lights, but still had problems with volume control.

So much for getting some work done. “Yeah, I can be. Give me two minutes.” Grey closed her laptop and slid it back into her bag. The coffee shop was still empty enough that she could probably reclaim her table when she returned.

Grey walked around the side of the building toward the parking lot and found a secluded tree to stand under. She lifted the phone to her ear again.

“I just got off the phone with the Golden City casting director. They loved you.”

Ava Wilder is a contemporary romance writer. After spending most of her life bouncing all over the East Coast, she currently lives in Oklahoma City with her fiancé and their toothless cat. How to Fake It in Hollywood is her first novel. No one is more surprised than she is that her lifelong obsession with pop culture actually led to something useful. 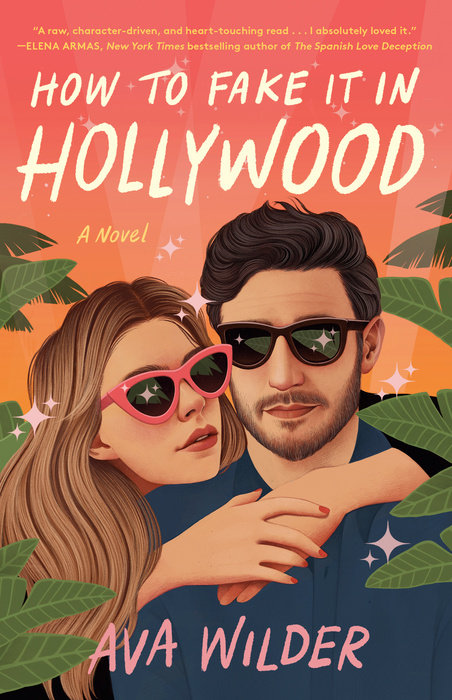