“Everyone who loves Sally Rooney should be reading Jana Casale!”—Julie Buntin, author of Marlena

Three women confront the compromises they’ve made to appease the men they love.

Joy and Annie are friends and roommates whose thirty-something lives aren’t exactly what they’d imagined. To make ends meet, they decide to rent their extra bedroom to Theo, who charms Joy with his salt-and-pepper hair and adoration of their one-eyed cat. When Annie goes to live with her boyfriend, Theo and Joy settle into a comfortable domesticity. Then Theo brings home Celine, the girlfriend he’s never mentioned, who is possibly the most stunning woman Joy has ever seen. Joy resolves to do whatever it takes to hold on to him, falling ever deeper into an emotional hellscape of her own making. She is too obsessed to realize that Celine’s beauty doesn’t protect her from pain. Haunted by an event from her past, Celine can’t escape her shame and finds herself in an endless cycle of self-sabotage.

Annie is baffled by Joy’s senseless devotion to Theo, but she’s consumed by her own obsessions: she can’t stop parsing her commitment-phobic boyfriend’s texts in an exhausting mission to maintain his approval. At work, where she fully embraces her natural assertiveness, Annie is a star. But when an anonymous letter lands on her desk accusing her esteemed and supportive boss of sexual misconduct, she is forced to decide who and what she’s willing to stand up for.

Perceptive, mordantly funny, and full of heart, How to Fall Out of Love Madly examines women’s many relationships—with one another, their mothers, their work, men, and themselves—to reveal their underlying power and complexity. It asks, why do so many smart, compassionate, otherwise empowered women tolerate egregious behavior from the men they love? And what will it take for them to reclaim control?

An excerpt from How to Fall Out of Love Madly

Let me tell you something about my stomach. It’s big and I hate it. I think about it all the time. I think about the way it looks in shirts and dresses, the way it sits over my jeans and hangs over the edge. When I’m sitting, it juts out in the most hideous way with big folds. There’s no flattering way for me to sit with it so I think about ways to not sit, and I think about sucking it in whenever it is that I am sitting. I think about what other people think about it, and what they think of me because of it. I never want to look at it, but I can’t stop staring at it in the mirror whenever I get the chance. I would love to tell you that it doesn’t define how I think of myself, but those are just words and they’re not making me feel what it is I want to feel and what it is that I want to feel is thinner. I cry about it a lot, mostly to myself and sometimes to my mom. She usually tells me I’m crazy and that I should stop obsessing. One time, just once, when I’d called and started in on the same conversation about my weight and how fat I am, she said as I was sobbing,

And that moment I think about all the time. I’ll hear her voice as I wait at a stoplight or even when I pee.

I know it would kill her to think that even though she’s told me I am thin ten thousand times over, the only thing I think about is the one time she said, “Jenny Craig, maybe?” I know it would kill her so I don’t tell her; I just think it and wonder what motion there was in her heart the moment she said it and I fear whatever that motion was is not part of me like I want to believe everything about my mom is part of me. And then I feel as vast and big as anything else. Empty is the word for it. So I sit down and suck in my stomach and just keep on going, Jenny Craig, forever.

Joy was put on birth control at thirteen years old by her doctor, who was a man. He was old and had been her doctor since she was a baby. When her mother had told him in private that her daughter had very painful, heavy periods, he suggested it, and without question they put her on a small dose of hormones. From the age of thirteen until now, at nearly thirty years old, Joy had not ovulated.

At first she immediately felt superior to everyone else in her eighth-grade class. If I wanted to have sex right now I totally could, and I wouldn’t get pregnant, she often thought. But the thought such as it was was useless because no one had sex with Joy until she was twenty-four. Besides that, the birth control did help with her cramps, which had been so violent that she’d once thrown up from the pain. Her mom and she had been at the movies seeing Disney’s Tarzan, and she’d been trying desperately to keep from having to go home. She even took off her shoes and tucked her feet up under herself trying to find a position comfortable enough to stop the pain. But nothing worked, and she found herself running to the bathroom nearly doubled over. She could vividly remember throwing up completely undigested Sno-Caps to the sound of a little kid’s voice outside the bathroom stall saying, “I think someone is throwing up.”

It was a godsend when the cramps eased up and she didn’t have a ton of side effects from the hormones either, as her mother had feared she might.

“If you feel bad at all let me know because there are other options that might help just as much,” she’d say, but Joy was fine and felt better. But what she didn’t know and wouldn’t know was that the minute she started the pills her brain’s response, besides stopping ovulation, was to change the way it perceived other people’s pheromones, and because of this, Joy wasn’t attracted to the men to whom she would have been if she’d never gone on the pills to begin with. Instead she found herself attracted to many of the wrong types of men and every relationship she’d pursue would end badly. She dated a guy named Felix and a guy name Cory and then a guy named Guy. Her only real relationship was four and a half months long. His name was Ryder and he thought extremely highly of himself. Joy knew very early on that she wasn’t in love with Ryder, and that he was at best an inappropriate choice for her and at worst a damage to her self-esteem, but she didn’t let herself acknowledge even one of those thoughts. Instead, she tried desperately to convince herself that she was in love with him, even telling friends, “I think I’m falling in love with him,” something she could text and almost believe, but the second she said it out loud, she felt foolish and instantly regretted it. Ryder broke up with her just shy of their five-month anniversary (a date he would likely forget and she would likely make excuses for him for forgetting), because he wanted to “live in a tiny home in Alaska.” When he told her this she didn’t cry, but when she got home she cried a lot, and it made her wonder what was it that was making her feel this devastated if it wasn’t love and the best she could come up with was that it was loneliness and the second best she could come up with was disappointment and the third, rejection. She wouldn’t know much more than that; she wouldn’t know that even though she’d told herself for ages that she didn’t mind being single and that she didn’t want children anyway and that turning thirty very soon meant nothing, somewhere it terrified her that at this age she’d never been in love with anyone and that no one loved her, no one at all, and coming off of this state, not too much later, she would meet Theo.

Joy and Annie had become roommates even though they were also good friends, a risky decision that in most contexts could be cataclysmic, but as it was they bought a couch split fifty-fifty and although he was Annie’s cat, Joy would feed Simon in the mornings and Annie would feed him at night. They rented a three-bedroom in the trendy part of town with the hope that they’d keep the spare bedroom as a guest room.

“I’ve got my friend Sophie from Paris,” Annie said, “Maybe she’ll invite me stay with her in Paris if she comes here first.”

“I thought you hated her,” Joy said.

Annie shrugged. “I don’t hate her more than I hate any of my other friends.”

Joy nodded. “My mom could stay with us too.”

But not more than three months into the lease, both women became frustrated by their monthly expenses: the landlord had gone up a hundred dollars in rent, the heat was costing them a fortune—in the end they decided the smartest thing for them would be to rent out the third bedroom.

They put up an ad on Craigslist that read:

Two young women professionals looking for a third roommate. We’re neat but not crazy neat. We are respectful, yes, crazy respectful, and we have a cat.

“Isn’t there a less pithy way of writing this? It’s obnoxious.”

“Should we mention our ages?” Joy said.

“So we don’t end up living with someone who is too young or too old.”

“You think an old person is going to move into this shitty-ass apartment with us?”

Joy hated the way Annie would rip into the apartment like that. It made Joy feel like Annie was just throwing everything away, or more accurately clearing it away like you would a dirty glass or a fogged windowpane. A blistering transparency of their little home would flash through Joy’s thoughts: the matching teacup and teakettle from a flea market they’d bought together, uselessly cheerful. The potted plant garden they’d spent entirely too much time planting. The blinds left half down in the dining room, suddenly with menacing abandon. Joy shook it from her mind.

“Well, what about too young? Do we really want to live with a college student?”

They took a picture of the empty guest room, soon to be the home of a stranger, and posted it alongside the description.

Annie was silent for a moment as she reread the post. “Let’s make a pact that no matter who moves in here, this is still our home and we’re not going to be pushed out by them,” she said. “I don’t want things to change just because someone new comes in.”

It may have been unnecessarily fretful or even a little mean, but Joy was happy to hear Annie say it. With all the apartment bashing Annie had done, it was nice to indulge in the idea that it would be them against the world as they chose the dish soap scent and reorganized the refrigerator magnets.

“Agreed. We won’t let them touch a damn thing,” Joy said. And they both laughed at how bitchy and lovely the world could be.

Jana Casale is the author of The Girl Who Never Read Noam Chomsky. She has a BFA in fiction from Emerson College and an MSt in creative writing from Oxford. She currently resides outside Boston, Massachusetts, with her husband and son. 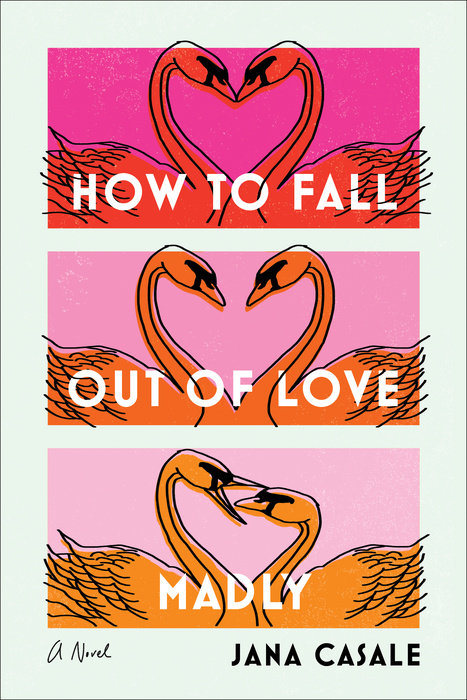