An American woman and her son stumble upon the dark history of a rambling English manor house in this “masterful, riveting, and atmospheric” (Alka Joshi, author of The Henna Artist) novel from New York Times bestselling author Lauren Belfer.

“With vibrant prose, Lauren Belfer shepherds us through a centuries-old mystery and into a modern-day introspection on motherhood, marriage, and love.”—Georgia Hunter, New York Times bestselling author of We Were the Lucky Ones

When a close relative falls ill, Hannah Larson and her young son, Nicky, join him for the summer at Ashton Hall, a historic manor house outside Cambridge, England. A frustrated academic whose ambitions have been subsumed by the challenges of raising her beloved child, Hannah longs to escape her life in New York City, where her marriage has been upended by a recently discovered and devastating betrayal.

Soon after their arrival, ever-curious Nicky finds the skeletal remains of a woman walled into a forgotten part of the manor, and Hannah is pulled into an all-consuming quest for answers, Nicky close by her side. Working from clues in centuries-old ledgers showing what the woman’s household spent on everything from music to medicine; lists of books checked out of the library; and the troubling personal papers of the long-departed family, Hannah begins to recreate the Ashton Hall of the Elizabethan era in all its color and conflict. As the multilayered secrets of her own life begin to unravel, Hannah comes to realize that Ashton Hall’s women before her had lives not so different from her own, and she confronts what mothers throughout history have had to do to secure their independence and protect their children.

“Infused with the brooding, gothic atmosphere of Jane Eyre or Rebecca” (Melanie Benjamin, author of The Children’s Blizzard) and rich with female passion, strength, and ferocity across the ages, Ashton Hall is a novel that reveals how the most profound hauntings are within ourselves.

An excerpt from Ashton Hall

On a Sunday morning in late June, I waited with my son at the side entrance of a stately home near Cambridge, England. We stood on a stone bridge that spanned what was once a moat, the water drained, a grassy pathway beckoning at the bottom, the moat’s walls overgrown with greenery.

I rotated the lever that controlled the bell. The sound grated within. Metalwork vines covered the cracked wooden door. Above me, the panes of the broad mullioned windows were like multifaceted mirrors, reflecting fragments of gray-bottomed clouds and blue sky.

The house, dating from the early 1600s, was a red-brick extravaganza of turrets, chimneys, and Flemish gables. Cream-colored limestone outlined the windows and doorways. Statues of cows, pigs, and sheep, whimsical barnyard gargoyles, stared down at me from the gutters. Ever since the eleventh century, a home had stood here.

This was my third try with the doorbell. I now had reason to worry that Christopher wasn’t going to answer. He was old, he was ill, he was dead. Fallen to the bottom of the stairs in a heap. Collapsed on the kitchen floor. Peacefully slipping away while asleep in his bed—the option I wished for him, for his sake and my own, because I loved him and didn’t want him to suffer.

I turned away from the door. The garden spread before us, sparkling in the morning sun, saturated with color, the rising terraces culminating in a tempietto, a round, open colonnade covered by a dome, at the top of a hillock. At the perimeter of the garden, thickly planted trees created a wash of green dotted by the darker copper beeches. The breeze was a moist caress upon my skin. The air carried a scent of lavender. I know a bank where the wild thyme blows—the line from Shakespeare’s A Midsummer Night’s Dream came into my mind. A shower had passed through shortly before, and the paths were damp. The flowering fuchsia along the moat dripped with raindrops, glowing in the sunlight. Off to my left, behind the house and across the rain-drenched lawns, an incandescent mist rose from the ornamental lake.

Christopher had arranged for a car and driver to meet us at Heathrow after our flight from New York, to bring us here, and leave us here.

And here we remained, surrounded by luggage, on a bridge over a moat at the side entrance of a Jacobean mansion, with no one answering the door.

Nicky pressed his head against my shoulder. I wrapped my arms around him and pulled him close. He was growing so fast. How young and adorable he looked, at this moment of calm.

In front of the house, the estate’s original farm buildings, also red brick with limestone trim and a series of Flemish gables, framed a ceremonial approach to the mansion’s formal entrance. These accommodated a cafe, visitors’ center, and secondhand bookshop. At ten o’clock, they would open to the public, along with the gardens. At noon, the mansion’s historic rooms would open. Was that the aroma of fresh coffee, wafting on the air from the cafe? Of brownies baking? Definitely.

Go find help. I should have been striding to the visitors’ center.

“A dog is barking.” Nicky disengaged himself from me. He frowned, listening.

Nicky studied the woods near the lake. I studied his hazel eyes, his dark brows, his straight brown hair, cut in a bowl style.

“It’s coming closer. I bet it’s Duncan.” Duncan was Christopher’s dog. “Do you hear him now?”

His words stunned me, even though I’d heard such language often enough from him before. No one spoke to Nicky this way—not me, not his father, not his teachers. Yet this was the way he spoke to us. I was worn down from the effort of keeping myself prepared to respond to his outbursts. “Watch your tone! Watch your language.”

He sounded contrite. As usual, I couldn’t judge whether he truly was contrite or had said what he needed to say to avoid punishment.

Bounding from the woods near the ornamental lake—Duncan, a cream-colored golden retriever, raced across the lawn.

Christopher emerged from a woodland path, too, bent over his cane, picking his way forward. Beside him, a well-muscled man kept a hand on Christopher’s elbow. With a respect obvious from a distance, his T-shirt and jeans transformed into the most professional of uniforms, the man guided Christopher along the path.

“Duncan, Duncan!” Nicky was gone from my side.

As I walked toward the two men, dread slowed my steps. I didn’t want to see what Christopher’s illness had done to him. He was in his late eighties and suffering from a type of cancer whose details he refused to discuss. The nasties, he called it, in his way of brushing off matters of greatest concern.

“And a fine good morning to you,” Christopher called as I approached. His voice was hoarse. Once, he’d stood straight, his bearing dignified and patrician. Now he was shrunken, his skin blotchy, his eyes hollow. Nonetheless, he was dressed for a better world, or his view of a better world: white flannel trousers, paisley ascot, blue linen jacket, straw boater. Keeping up appearances—the only defense against the nasties, or anything else, as he might say.

I hugged him. His bones were sharp, from his weight loss. His hand trembled as he patted my back. When we separated, he swayed. He clutched his aide’s arm. He made an effort to breathe and to smile. “Allow me to introduce Rafe Connors, my assistant in life’s daily rituals and travails. Rafe, this is Hannah Larson, my honorary niece.”

“Good morning,” Rafe said. We shook hands. He looked about thirty-five, his short-clipped hair receding. Tattooed images of angel wings encircled his arms. “Mr. Eckersley has spoken of you.”

Rafe’s brogue sounded Scottish, and his voice was surprisingly gentle for his tough-guy physique. I wanted to clutch Rafe’s arm, too, to help me negotiate the gap between the Christopher I remembered and the man I faced today.

“I trust your journey has done you no lingering harm,” Christopher said. “How marvelous to welcome you”—he gestured in the direction of the house—“to this, my humble abode.”

Lauren Belfer is the New York Times bestselling author of And After the Fire, winner of the National Jewish Book Award; A Fierce Radiance, a Washington Post and NPR Best Mystery of the Year; and City of Light, a New York Times Notable Book, a Library Journal best book, a Main Selection of the Book-of-the-Month Club, and an international bestseller. Belfer attended Swarthmore College and has an MFA from Columbia University. She lives in New York City. 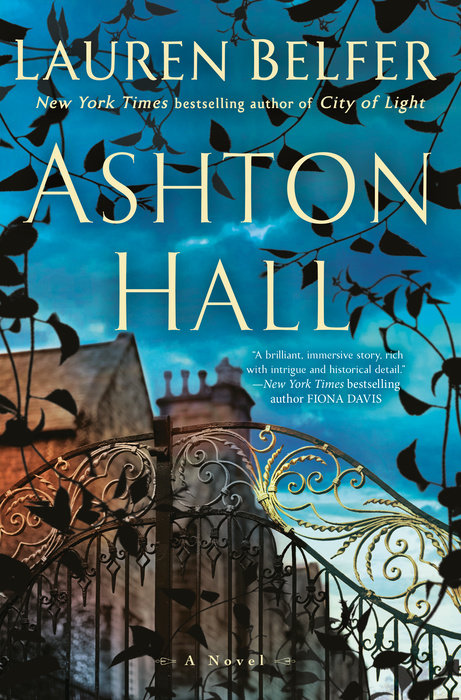