“I am truly blown away by this novel.”—Jacqueline Woodson, New York Times bestselling author of Red at the Bone

When the windshield of his Chevy Impala shatters in a dark diner parking lot in Alabama, Melvin moves without thinking. A split-second reaction marrows in his bones from the days of war, but this time it is the safety of his fiancé, Bernadette, at stake. Impulse keeps them alive, and yet they flee with blood on their hands. What is life like now that they are fugitives? Pack passports. Empty bank accounts. Set their old life on fire. The couple disguise themselves as a pastor and a reluctant pastor’s wife who’s hiding a secret from her fiancé. With a persistent FBI agent on their trail, they travel to Ghana to seek the help of Melvin’s old college friend who happens to be the country’s embattled president, Kwame Nkrumah.

The couple’s chance encounter with Ghana’s most beloved highlife musician, Kwesi Kwayson, who’s on his way to perform for the president, sparks a journey full of suspense, lust, magic, and danger as Nkrumah’s regime crumbles around them. What was meant to be a fresh start quickly spirals into chaos, threatening both their relationship and their lives. Kwesi and Bernadette’s undeniable attraction and otherworldly bond cascades during their three-day trek, and so does Melvin’s intense jealousy. All three must confront one another and their secrets, setting off a series of cataclysmic events.

Steeped in the history and mythology of postcolonial West Africa at the intersection of the civil rights movement in America, this gripping and ambitious debut merges political intrigue, magical encounters, and forbidden romance in an epic collision of morality and power.

An excerpt from The Scent of Burnt Flowers


Bernadette awoke to the sound of a loud blast and thought Melvin had shot himself. She had feared this day would come, yet nothing could prepare her for it. The flickering light that illuminated the small hotel room blinded her as she slid off the bed trembling. She could feel her heart pounding through the silk nightgown she had hurriedly packed the night they fled Philadelphia for Accra, a city she had only read about in the newspapers.

The story was about a young boxer who won a gold medal at the 1964 Olympic games. “Accra,” she had said out loud, finding the name fascinating. She never imagined that she would be a fugitive in that same city just two years later.

The sound of gun smoke piercing the air jolted Bernadette once more. The hotel balcony door swung open, sending in a rush of light. Melvin leaned in and smiled. “It’s just fireworks, babe. Happy New Year!” She sighed, deeply relieved. The sky burst into a thousand shimmering colors silhouetting Melvin’s towering frame. Even then, she could still see his bright piercing eyes, gazing ardently at her. Bernadette wrapped her arms around his broad shoulders and sobbed quietly.

“It’ll all work out, babe, I promise,” Melvin whispered.

This wasn’t the first time Bernadette had heard those words, but tonight she believed him. Maybe it was the cacophonous crowds celebrating the new year or the ephemeral fireflies floating through the night sky. She truly believed it would all work out. Melvin poured Bernadette a glass of water and they sat on the hotel balcony watching the fishermen stagger in a drunken stupor. A crackling bonfire brightened the canoe sails that billowed at the mercy of the wind, casting an ominous shadow on the beach. Occasionally, a young couple or two would stroll hand in hand toward the crashing waves, avoiding the large groups of women clad in all white who had congregated for a new year’s prayer meeting. Amid the pulsating atmosphere, a somber highlife tune seeped out of a nearby transistor radio, captivating Melvin and Bernadette. Melvin held his hand out to her, a small assurance. They swayed in each other’s arms, overlooking the glimmering fireworks that brightened the city that had given them temporary refuge. Bernadette felt the ocean breeze and mosquitoes buzzing around her ear, and she thought about how similar Accra was to her childhood home of Baton Rouge, Louisiana. The humid smell that lingered after a brief downpour reminded Bernadette of a story her grandmother told her about the day she was born. A day she thought about more frequently as she worried her days were drawing nigh.

It was the summer of 1935, and a season of hurricanes and heavy rains had flooded the Mississippi River. Bernadette’s mother, Alice Broussard, was already in labor when news of the broken levees spread like wildfire. Bernadette’s father, Bernard Broussard, had died earlier that summer in a bizarre boat accident on the same Mississippi River that would soon swallow Baton Rouge. The only family Alice had was Bernadette’s grandmother, Ma’ Susan. The two lived in a small shotgun house near Magnolia Mound Plantation, an edifice that conjured the enduring legacy of chattel slavery. The flood soon overwhelmed everything south of Merrydale, and the ineptitude of the state relief agency guaranteed a muddled rescue effort.

When it finally began, the evacuation was for white residents only. Alice and Ma’ Susan hid in the attic, hoping the top floor would serve as safety, but they were soon submerged. The ferocious thunderstorm that battered the house that night drowned Alice’s screams as she pushed new life into the world. Ma’ Susan held her breath underwater long enough to cut the umbilical cord and wrap baby Bernadette in a wet blanket. That was when she witnessed a moment so magical that she never told anyone, except Bernadette.

Alice began to drift below the attic, which had mysteriously collapsed into a vast ocean. An otherworldly light emanated from her torso, transforming her into a mermaid. As Ma’ Susan struggled to keep Bernadette afloat, a force lifted them above the water. Alice smiled, waved, and disappeared into the deep dark ocean, leaving Ma’ Susan forlorn and grief-­stricken. Her tears were swallowed by the deluge, which had now reached the ceiling. Then Wilbert Benoit, a beloved Negro businessman, floated to the attic window with his paddleboat. He had been circling West McKinley Street searching for survivors when he heard the wailing cries of a baby. It took almost an hour of prying and sawing to bring baby Bernadette and Ma’ Susan safely aboard.

The subsequent scale of destruction was overwhelming. It took six months of dredging for the floodwater to recede. When it finally did, Alice’s body was never found. Ma’ Susan remained unequivocal about what she had witnessed that night. She called Bernadette “Water Baby” and often recounted her mythical birth story.

Of course, Bernadette didn’t believe a word of it, but her affinity for water was evident nonetheless. She spent countless hours in the beige clawfoot bathtub her grandmother had bought at a yard sale. Bernadette often passed out while submerged. On more than one occasion her grandmother walked in and thought she had drowned. It seemed Bernadette could breathe underwater as easily as she did above it. Now, with her present predicament, she wished for that same ease of breath.

A gentle tug on Bernadette’s shoulder woke her up. She turned to see Melvin fully dressed and lighting a cigarette nervously. “We gotta go, babe,” he stammered.

Bernadette sprang to her feet. “They found us?”

Flustered, Bernadette dashed into the hotel room, leaving Melvin to languish on the balcony. He took an anxious drag, exhaled, and cast his gaze across the street, where the fishermen had celebrated the new year. The first light of sunrise blinded him. Abrasive sounds of cars honking and haggling street vendors added to his throbbing headache. Accra was indeed a sprawling metropolis, and from where Melvin stood, he could see it all. The stoic police officer in his crisp colonial uniform, overwhelmed by the traffic. Motorcycles and rickshaws, zigzagging past frustrated passengers in boneshaker buses. European businessmen ill-­adjusted to the tropical heat. And in the middle of it all stood the statue of the man who had brought independence. The reason Melvin and Bernadette had fled to Ghana in the first place—­Kwame Nkrumah.

“I’m ready,” Bernadette said as she stepped onto the balcony wearing a colorful floral dress. She adjusted her wide-­brimmed hat that rendered her inconspicuous. Her smooth brown skin glowed in the humid equatorial heat, as she dabbed beads of sweat trickling down her forehead. Bernadette had celebrated her thirty-­first birthday earlier that year, but her youthful features inherited from her great-­grandmother said otherwise. Those same features were the reason Bernadette could never pass as a local. Her high cheekbones, narrow slanted eyes, and statuesque figure were enough to label her obroni, a term that was originally used for European colonists but had morphed to mean foreigners of all races. To avoid standing out too much, Bernadette had planned to braid her long curly hair before they left Philadelphia, but under the circumstances a simple ponytail would suffice. Melvin tossed his half-­smoked cigarette and crushed it under the heel of his shoe.

“How many of them you see?” Bernadette asked, grabbing her suitcase.

“Two, maybe three. If they ain’t FBI, they sure dress like ’em,” Melvin said, adjusting his pastor’s collar in the mirror. The same pastor’s collar he had bought at the Snyder Avenue Costume Shop in Philadelphia. The Christian missionary disguise was the best option he could find. To Melvin’s surprise, he actually looked the part. His dark shaven face, precisely parted hair, and general fastidiousness gave him the air of a clergyman. Melvin had just turned forty-­two and his Sidney Poitier–­esque posture made his costume fit like it was tailored. Bernadette was supposed to play the pastor’s wife, even though they were only engaged. Melvin flipped the suitcase buckle and grabbed a .38-­caliber Ruger. He tucked it in the small of his back and recalled how simple it was to smuggle a loaded gun on an international flight. As long as the customs officers saw his Bible and pastor’s collar, he was exempt from all scrutiny. It also helped that all the men were distracted by Bernadette’s perfect hourglass figure, a sticky point for Melvin in their otherwise stable relationship.

A knock on the door startled Melvin and Bernadette. They exchanged nervous looks as the knock echoed again. Melvin dug out the revolver and aimed it steadily at the door.

Blitz Bazawule is a multidisciplinary artist born in Ghana. His feature directorial debut, The Burial of Kojo, premiered on Netflix via ARRAY Releasing. He co-directed Beyoncé’s Black Is King, which earned him a Grammy nomination. Bazawule is set to direct the musical version of The Color Purple for Warner Bros. His artwork has been featured at the Whitney Biennial. He is also a TED senior fellow and a Guggenheim fellow. 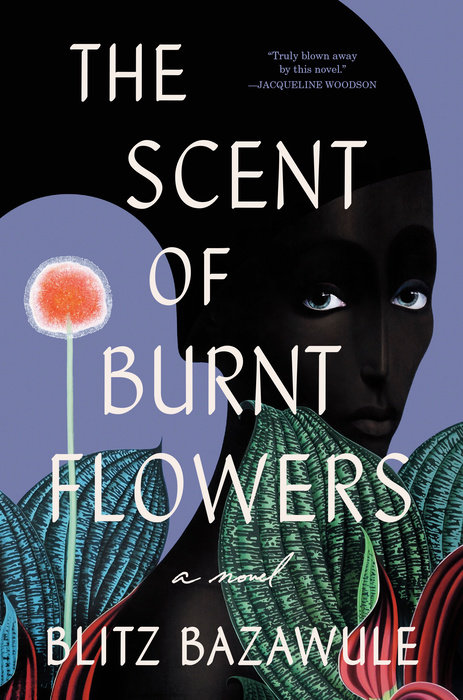