ONE OF THE BEST BOOKS OF THE YEAR: PopSugar

In 2018, without any plan or agenda for what might happen next, Patti Smith posted her first Instagram photo: her hand with the simple message “Hello Everybody!” Known for shooting with her beloved Land Camera 250, Smith started posting images from her phone including portraits of her kids, her radiator, her boots, and her Abyssinian cat, Cairo. Followers felt an immediate affinity with these miniature windows into Smith’s world, photographs of her daily coffee, the books she’s reading, the graves of beloved heroes—William Blake, Dylan Thomas, Sylvia Plath, Simone Weil, Albert Camus. Over time, a coherent story of a life devoted to art took shape, and more than a million followers responded to Smith’s unique aesthetic in images that chart her passions, devotions, obsessions, and whims. Original to this book are vintage photographs: anniversary pearls, a mother’s keychain, and a husband’s Mosrite guitar. Here, too, are photos from Smith’s archives of life on and off the road, train stations, obscure cafés, a notebook always nearby. In wide-ranging yet intimate daily notations, Smith shares dispatches from her travels around the world.

With over 365 photographs taking you through a single year, A Book of Days is a new way to experience the expansive mind of the visionary poet, writer, and performer. Hopeful, elegiac, playful—and complete with an introduction by Smith that explores her documentary process—A Book of Days is a timeless offering for deeply uncertain times, an inspirational map of an artist’s life.

An excerpt from A Book of Days

On March 20, 2018, the Spring Equinox, I posted my first Instagram entry. My daughter, Jesse, had suggested that I open an Instagram account to distinguish mine from fraudulent ones soliciting in my name. Jesse also felt the platform would suit me, as I write and take pictures every day. She and I created the site together. I wondered how I might signal to the people that it was truly me reaching out to them. I decided upon a straightforward approach: thisispattismith.

I used my own hand as the image for my first venture into the virtual world. The hand is one of the oldest of icons, a direct correspondence between imagination and execution. Healing energy is channeled through our hands. We extend a hand in greeting and service; we raise a hand as a pledge. Ocher handprints, thousands of years old, found stenciled in the Chauvet–Pont d’Arc Cave in southeastern France, were formed by spitting red pigment over a hand pressed against the stone wall to merge with an element of strength or perhaps to signal a prehistoric declaration of self.

Instagram has served as a way to share old and new discoveries, celebrate birthdays, remember the departed, and salute our youth. I write my captions in a notebook or directly on the phone. I would have liked to have had a Polaroid-based site, but as the film has been discontinued, my camera is now a retired witness of former travels. The images in this book are drawn from existing Polaroids, my archive, and the cellphone. A process unique to the twentyfirst century.

Although I miss my camera and the specific atmosphere of the Polaroid image, I appreciate the flexibility of the cellphone. My first inkling of a cellphone’s possible artistic usefulness was through Annie Leibovitz. In 2004 she took an interior shot with her cell, and then printed it out as a small, low-resolution image. She said offhandedly that she thought it would one day be possible to take worthy pictures with a phone. I didn’t consider having a cellphone back then, but we evolve with the times. Mine, acquired in 2010, has enabled me to unite with the exploding collage of our culture.

A Book of Days is a glimpse of how I navigate this culture in my own way. It was inspired by my Instagram but is uniquely its own. Much of it I created during the pandemic, in my room alone, projecting into the future and reflecting the past, family, and a consistent personal aesthetic.

Entries and images are keys to unlocking one’s own thoughts. Each is surrounded with the reverberation of other possibilities. Birthdays acknowledged are prompts for others, including your own. A Paris café is all cafés, just as a gravesite may echo others mourned and remembered. Having experienced much loss, I’ve found solace in frequenting the cemeteries of people I love, and I have visited many, offering my prayers, respect, and gratitude. I am at home with history and tracing the steps of those whose work has inspired me; many entries are that of remembrance.

I have been encouraged in watching my site grow, from the first follower, my daughter, to over one million. This book, a year and a day (for those born on leap day), is offered in gratitude, as a place to be heartened, even in the basest of times. Each day is precious, for we are yet breathing, moved by the way light falls on a high branch, or a morning worktable, or the sculpted headstone of a beloved poet.

Social media, in its twisting of democracy, sometimes courts cruelty, reactionary commentary, misinformation, and nationalism, but it can also serve us. It’s in our hands. The hand that composes a message, smooths a child’s hair, pulls back the arrow and lets it fly. Here are my arrows aiming for the common heart of things. Each attached with a few words, scrappy oracles.

PATTI SMITH is the author of Just Kids, which won the National Book Award in 2010, and of M Train, as well as numerous collections of poetry and essays. Her seminal album Horses has been hailed as one of the top 100 albums of all time. In 2005, the French Ministry of Culture awarded Smith the title of Commandeur des Arts et des Lettres; she was inducted into the Rock and Roll Hall of Fame in 2007. 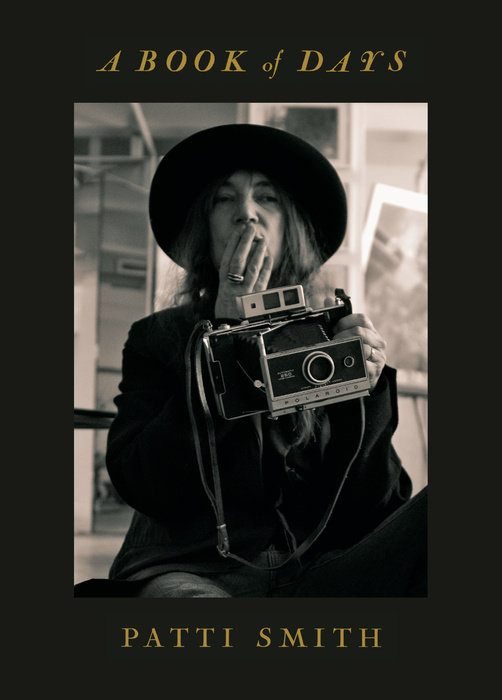