Delve into the mind of Critical Role’s most charming villain in this original novel that chronicles Lucien’s early life and his fateful meeting with the Mighty Nein.

Lucien has always been able to spin a bad situation to his advantage. From his childhood on the dangerous streets of Shadycreek Run to his years living off the grid and learning blood magic from the Claret Orders, the charismatic blood hunter will find a way to get the upper hand.

When Lucien is on a job in the frozen wastelands of Eiselcross with his fellow mercenaries, a rough-and-tumble crew called the Tombtakers, fate leads him to a mysterious journal in the ruins of an ancient city. The book speaks of the Somnovem, nine beings who can grant Lucien power beyond imagining—if he is able to find them and free them from captivity.

Intrigued by this opportunity, Lucien pores over the journal—but the more he reads, the stranger things become. The nine whisper to him in dreams and waking visions. Time slips away, along with Lucien’s grasp on reality. And tattoos of red eyes begin appearing on his skin. . . .

With the ability to reshape the world within his grasp, Lucien ignores all warning signs. He has always bent fortune to his will, and nothing—not even death—will stop him now.

An excerpt from Critical Role: The Mighty Nein--The Nine Eyes of Lucien

Lucien shoved open the cellar door and tumbled out into the sunlight. His stomach gurgled a desperate tune (priority one) and as he lifted his arms to stretch, he noted how light his pockets felt (priority two). Some enterprising so-­and-­so had left a twig crossed over a thistle in the dirt just outside the stone lip of the cellar. Crouching for a better look, Lucien discovered ten slapdash marks under the twig and thistle. Ten coppers. To a boy of twelve squatting in a cave-­cold cellar belonging to a retired madame, that was a lot of coin.

Priorities one and two, he smirked, were quickly getting sorted.

These little signs appeared outside the door from time to time, and only when someone on Clover Street had a job for an itinerant, broke, morally unbothered freelancer. Check, check, and check. Lucien swept up the pile of rubbish, inspected it, and discovered the stick had been dipped in mauve paint. That meant someone from the Mardoons was offering the work, and they tended to be good for whatever coin was promised. A beggar couldn’t be a chooser in Shadycreek Run, so Lucien stuffed the twig and thistle in his pocket and locked the cellar door behind him. He didn’t pocket the key, but instead tossed it to himself idly and whistled a made-­up song while he swung around to the front side of the townhouse.

Viewed from the street proper, Auntie Mama’s two-­story shack listed drunkenly to the right, nearly leaning on the shoulder of the also precariously crooked building beside it. Auntie Mama’s place always reminded him of a teakettle—­squat, tapered toward the “foundation,” and with a single tower that jutted out to the east like a spigot. Jammed between two swillholes of competingly ill repute, the stoop smelled alternately of piss and vomit.

A stiff, threatening wind blew down the lane, rattling the entire ramshackle block. That gust ran straight through Lucien’s threadbare coat, slicing like a cutpurse’s knife.

Auntie Mama was outside the door, not waiting for him, but sweeping a few stray leaves into a corner where the detritus would accumulate, a mushy bed for whatever wandering stray dog favored her that day. She named the mutts after jewels—­Jet, Emerald, Diamond—­never remembering which dog was which, but jangling her beringed fingers through the mangy, flea-ridden fur of the strays as if they were the king’s own spaniels. The sun was well out, but the collective Shadycreek hangover meant only a handful of productive citizens wandered around—­a half-­elf baker dusted in flour, a pair of working girls half asleep on their feet after an all-­night shift, a knock-­kneed dwarf leaning against the back door of a tavern, pipe in one hand, chewed turkey leg in the other, the smell of which started an agonizing call-­and-­response between the food and Lucien’s ravenous stomach.

He hung from the porch banister and sighed, watching the turkey disappear down the lane, waiting for Auntie Mama to notice him. It didn’t take long. He felt her broom poke at his behind and he spun, laughing.

“Another mutt darkens my door,” she mumbled. A skinny, aimless orphan was no rare sight in the Run, though Lucien’s combination of lavender skin, crimson eyes, curling horns, and deep-­purple hair was indeed striking. To Lucien’s young eyes, Auntie Mama seemed impossibly old, which meant she had lived around fifty summers. If I live to be that old, he often thought, I’ll be cramming my face with cold fruit in a hot bath, not raking leaves for strays. It was an easy thought to think, and it comforted him. Auntie Mama was a comfort in her own way, one of the only recurring roles in the rotating cast of characters that paraded through Lucien’s days.

“No breakfast today, mutt,” Auntie Mama added. Her voice rattled out, hoarse from decades of the pipe. “My girl’s coming to town. You need to find a new place to stay.”

“You’re breaking my heart,” Lucien murmured, dragging down his lip into an exaggerated pout. He relinquished the key to her cellar with a dramatic bow. “Not even a crumb for your favorite?”

Auntie Mama’s face was hardly more than a pile of increasingly wide wrinkles, a few spikes of eyebrow and chin hair, and rouged lips, but she could still pull a cheeky smile.

“Favorite! Ha! Favorite . . .” She muttered something unintelligible and puttered back toward the door. Every morning she wore the same layers of brown-­and-­green housecoat, belted, and floppy felt slippers that ended in points. Her graying human hair was full of bits of rags to make curls. When Auntie Mama opened the door to the house, the scent of stale perfume and last night’s roast rushed out.

“Favorites. Favorites will get you nowhere. ’Sides Brevyn. Oh, Brevyn, wasting away in the valley. Poor, poor Brevyn . . .”

Lucien settled back against the banister, waiting. He knew that if he just hung around long enough, Auntie Mama would cave and toss him a crust of bread or a bit of cheese and roll. It had been like this ever since she first found him hiding in her cellar. She had forgotten to lock it up one night, and a sudden northern blizzard had forced a desperate Lucien to grab whatever shelter he could find. His nightmares had given him away. Through the floors she heard him screaming in his sleep, and discovered him curled up in the cellar, skin and bone, shivering so violently he could have been seizing.

Auntie Mama had done nothing to address the mold in the cellar that ran thick and furred as carpets around the edges of the stonework, but she had brought him a mug of rose tea and a few tatty blankets, and barked out a cold, “This better not be an every-­night sort of arrangement.” Then she hobbled away, and that was Shadycreek kindness.

Over time, Lucien realized that if he made himself scarce, didn’t overstay his welcome, and occasionally ran errands for the old woman, she would allow him to use the cellar whenever the weather turned nasty. She even allowed him the key sometimes. They never spoke overmuch, and Lucien didn’t know a thing about her beyond what he could glean from the rumors around town and the portraits hanging in her front room. Many of those battered frames were empty, but one held a round, pink face, bright with promise. Brevyn, he decided, her daughter. The favorite.

Lucien wasn’t startled by much, but Cree Deeproots had a way of sneaking up on him. The catfolk’s yellow eyes sparkled with mischief, which was a bad sign if you were rich and a good sign if you were Lucien. Cree’s black fur was shining that morning, as it normally was, though her paws and face were somewhat mussed. She wore a well-­used leather duster with the sleeves rolled up, and a knitted shawl that matched her eyes was bundled around her neck. They were the same age, though Cree had started her life on the streets a few years before Lucien had.

“Fair morning to ye, Cree,” Lucien said, bowing. Cree merely rolled her shining eyes. Her expression changed, however, the moment he pulled the thistle and twig out of his pocket. “Shall we take a jaunt over to the Thirsty Grotto this morning? Looks like there’s work to be done.”

“How many hash marks?” she asked, ears twitching.

“Not enough to tempt me,” Cree said with a shrug. Lucien was about to point out that they could hardly afford to turn their noses up at ten coppers when the sly girl thrust out her hand, revealing her palm and the acorn, flecked with gold dust, within. Lucien felt his own eyes grow wide.

“I’ll be damned,” he whispered. He wetted his lips, hungry in a different way. “Where’d you find that, then?”

“Champ slipped it into my pocket last night at the Lady.”

The haze of greed that had descended at the sight of the acorn briefly lifted. By “the Lady,” Cree in fact meant the Landlocked Lady, a popular brothel in the Run that was fine, expensive, and not particularly amenable to street orphans.

“What the blazes were you doing there?” Lucien asked, tearing his eyes away from the acorn.

“Picking pockets,” Cree answered lightly. “Champ said a few regulars were stiffing on their bills, wanted me to make sure they were paid in full, as it were.”

“Bathe more often and he might let you have a chance at it,” Cree told him in a purr.

It was Lucien’s turn to roll his eyes. “Well, Your Highness, why come to me if you’ve struck it rich? That job will set you up for the year.”

Madeleine Roux is the New York Times and USA Today bestselling author of the Asylum series, which has sold over a million copies worldwide. She is also the author of the House of Furies series and several titles for adults, including Salvaged and Reclaimed. She has made contributions to Star Wars, World of Warcraft, and Dungeons & Dragons. Madeleine lives in Seattle, Washington, with her partner and beloved pups. 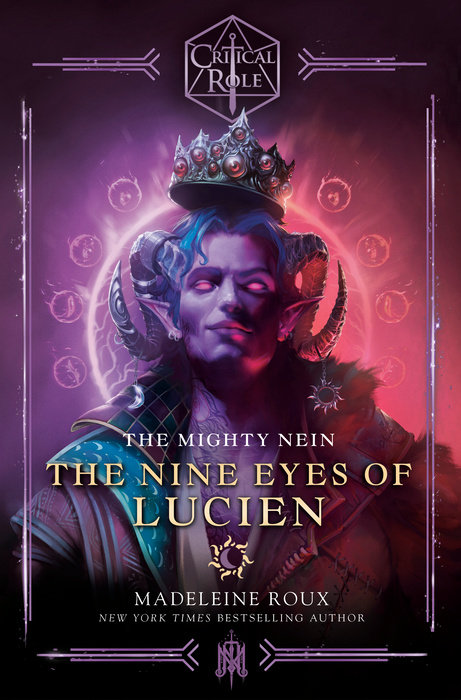