“A poignant, heart-tugging, life-affirming story that will wrap around you like a hug during any season. Keep tissues nearby!”—Josie Silver, #1 New York Times bestselling author of One Day in December

It started with a letter. It ended with a love story.

Every December, Josie posts a letter from her home in London to the parents she lost on Christmas night many years ago. Each year, she writes the same three words: Missing you, always. But this year, her annual trip to the postbox is knocked off course by a bicycle collision with a handsome stranger--a stranger who will change the course of Josie's life.

Josie always thought she was the only one who avoided the Christmas season, but this year, Max has his own reasons for doing the same—and coincidence leads them to spending the holiday together. Aglow with new love, Josie thinks this might be the start of something special.

Only for Max to disappear without saying goodbye.

Over the course of the next year, Max and Josie will find that fate continues to bring them together in places they'd never expect. New York City. Edinburgh. The quiet English countryside. And it turns out, Max had every reason to leave and every reason to stay. But what does fate hold for Josie and Max as Christmas approaches again?

A devastating, romantic, life-affirming love story, Always, in December will stay with readers long after they've finished the last page.

An excerpt from Always, in December

Josie stood in the doorway of her flat, under the mistletoe that Bia had insisted they hang “just in case,” and stared mutely at the box Oliver was clutching. One of her hands was still resting on the door, and for a moment she nearly gave in to the urge to slam it in his lying, cheating, and, she realized now, far too symmetrical face.

Oliver cleared his throat. “I know you wanted your stuff back so I just thought I would . . .” Something about the expression on her face caused him to trail off and he looked down at the box of her belongings instead. He fumbled with it as he tried to hold it out to her, awkwardly bumping into the doorframe instead.

“Right.” She gave in and took it from him, deliberately maneuvering so that she avoided touching his hand. She grunted at the sudden weight of it—it was far heavier than it looked. She supposed that made sense—two years’ worth of stuff left at his flat, forgotten about or left there deliberately to make life easier. Stuff she’d presumed, up until a few weeks ago, wouldn’t be leaving there for the foreseeable future, given she’d assumed that she would, sooner or later, be moving in. What had he been thinking, as he packed it all away? He’d pleaded with her not to end things initially, but now here he was, determinedly marking the end of the relationship.

She pressed her lips together firmly to stop them trembling, and turned her back to Oliver. Right at the top of the box, rolling around on one of her books, as if thrown in as an afterthought, were the flashing reindeer earrings he’d given her three weeks ago, ahead of their work Christmas lunch. The lunch where, instead of coming back with her once the desserts were out of the way, he’d stayed on to drink and flirt with a colleague of theirs. The lunch where, instead of coming home within the hour, he’d gone round to said colleague’s house. And slept with her.

She set the box down on the vinyl floor, just outside Bia’s room. She supposed, then, the earrings had been his farewell gift to her, though neither of them had known it at the time. The thought that had flared up time and time again since the morning after, where, still in bed, he’d told her what he’d done, stabbed at her mind now, even as she tried to repress it. The idea that, if she hadn’t gone home early after the lunch, then maybe they wouldn’t be stood here now. Maybe she’d be curled up next to him on his tiny red sofa watching reruns of Line of Duty and ordering a Thai takeaway and bottle of white wine. Maybe he wouldn’t have given in to temptation, also known as Cara. Or maybe it would have only been delayed, until the next time there was Prosecco and a skin-tight red dress involved.

She took a deep breath through her nose as she stood up, vowing to throw the earrings in the bin the first chance she got. He was still standing there when she turned back around, and she fought hard to keep her face impassive, to force down the angry lump in her throat. He shoved his hands in the pockets of his too-tight jeans and rocked back on his heels, looking over her head and around the flat as if admiring it for the first time. She folded her arms and raised her eyebrows. No way was she making this easier for him.

“So are you . . . OK?” He finally met her gaze and seemed to flinch back a bit from whatever he saw there. Good. It meant she’d nailed the drop-dead glare. She raised her eyebrows farther. She wouldn’t be surprised if they’d disappeared under her bangs by now, but she didn’t care. She refused to be dragged into any form of small talk, not after what he’d done to her.

“I mean, after what happened in the office today, I just wanted to make sure . . .” He trailed off again, apparently losing the ability to speak in full sentences. Josie kept her arms tightly crossed, desperately hoping that the heat she felt pulsing under her cheeks wasn’t showing on her face. Of course he’d bring that up. Of course he’d figured out why Janice had wanted to talk to her. One of the serious drawbacks to sharing an office with your ex, on top of the fact you had to see them every day, was the fact that you couldn’t lie and say everything was going just swimmingly at work.

“I’m fine,” she said shortly, though from the way his brown eyes turned soft as his gaze lingered on her face, she knew he didn’t buy it. She shifted her weight from one foot to the other, wishing she’d changed out of her black-and-white-striped work dress, which felt too tight now, and too exposing, like she’d gotten home at two in the afternoon and been sitting doing nothing for four hours. Which, to be fair, she had. Though maybe he wouldn’t notice—he’d never paid much attention to what she’d worn when they were together, something she’d found incredibly charming, the fact that he’d genuinely seemed not to care whether she was in a tracksuit or heels. She wondered now if that had all been put on, given the girl he’d slept with.

Oliver opened his mouth, shut it again, then nodded, clearly thinking better of whatever he’d been about to say, whatever condescending support he’d been about to offer. “All right,” he said evenly. He ran a hand through his dark brown hair, which lay flat against his head, almost like it was stuck in place, though the side part that she knew he combed into place every day was slightly ruffled. “But you know you can still talk to me, right, babe? I still—”

Josie held up a hand. “Don’t call me babe.” She sighed. “Please, just don’t.” She didn’t want to hear it. The offer of a shoulder to cry on, telling her that he still cared about her. Because surely if he cared about her that much, he wouldn’t have slept with someone else. And certainly not someone they both worked with, someone she had to face in the office, who walked around the place in completely impractical heels like she owned it.

“Right,” he said, and rubbed a hand across the back of his neck, looking away from her and glancing around the dull hallway. One of the lights was flickering weakly down the other end, the effect somehow highlighting the ugly, stained carpet that contrasted sharply with the vinyl inside the flat that Josie made an effort to keep clean and shiny. He took a breath, looked back at her with those brown Bambi eyes, the ones she’d fallen for two and a half years ago, when he’d first swanned into the office, just confident enough for it to be attractive and not annoying. “Jose, look, I know I hurt you, and I know you don’t think you’ll ever be able to forgive me, but I hate the idea of you sitting here alone, trying to deal with this. I just think if we could talk, we—”

Josie shook her head. “Oliver, I can’t do this right now.” His hand dropped to his side and he looked so damn pathetic in that moment, shoulders hunched under his black North Face coat, that she almost gave in and rested a hand on his arm. Almost. Until she remembered that he was not the wronged party in this situation. He had no right to keep trying to worm his way back in, to make her feel like she was overreacting. “And I’m not alone,” she said, her voice clipped. “I have Bia.”

“Right.” He nodded a few times, looking like that bobbing-head dog she’d gotten in this year’s office secret Santa. She’d had it on her desk since, trying to show she appreciated the gesture, even though every single bloody person that stopped by bopped it when they left her desk and then she had to watch it slow down its nodding out of the corner of her eye while she tried to type. “All right.” Oliver cleared his throat. “Well, I guess I’ll see you at the party on Tuesday then?” He tried a hesitant smile, showing off the crooked teeth she knew he hated.

“I guess you will,” she said, trying not to sigh. The party that they all had to go to, despite the fact that it was on Christmas Eve.

He hovered in the doorway for a moment longer, and she wondered if he was waiting for her to give in and hug him, or invite him in or something. After all, throughout the course of the relationship it had always been her making the compromises, her staying out late because he wanted a night out, or agreeing to go on a hectic city break rather than a retreat to the country. They both knew it, both had their roles to play. But this was different. Oliver glanced up, saw the mistletoe hanging sadly above them, and turned a little pink. Josie grimaced. She was going to kill Bia.

“Well,” he muttered, “until then, I suppose.” He shuffled away from the door, but glanced over at her before she could shut it. “I’m sorry, you know.” His eyes, almost exactly the same shade of brown as hers, didn’t blink once. “I know it’s crap timing and I really . . .” He shook his head. “I’m just sorry.”

She hesitated for half a second, her lips pressed tightly together, wondering whether she should say something to make him realize that sorry wasn’t good enough, to ask him why, and why now, at a time of year he knew was difficult for her. To ask him if he’d slept with Cara again, if he would move in on her, now that Josie was out of the way. But she couldn’t bring herself to, wasn’t sure she actually wanted to know the answer. So instead she nodded once, then let the door click shut.

Emily Stone lives and works in the UK and wrote her first novel, Always, in December, in an old Victorian manor house with an impressive literary heritage. 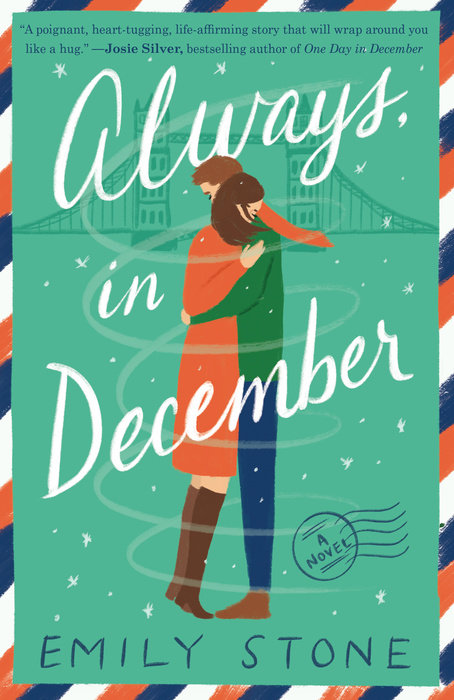