'I cannot remember when I was not fascinated by Henry Adams,' said Gore Vidal. 'He was remarkably prescient about the coming horrors.'

His political ideals shaped by two presidential ancestors—great-grandfather John Adams and grandfather John Quincy Adams—Henry Adams was one of the most powerful and original minds to confront the American scene from the Civil War to the First World War.

Printed privately in 1907 and published to wide acclaim shortly after the author&'s death in 1918, The Education of Henry Adams is a brilliant, idiosyncratic blend of autobiography and history that charts the great transformation in American life during the so-called Gilded Age.

With an introduction by renowned historian Edmund Morris.

An excerpt from The Education of Henry Adams

UNDER the shadow of Boston State House, turning its back on the house of John Hancock, the little passage called Hancock Avenue runs, or ran, from Beacon Street, skirting the State House grounds, to Mount Vernon Street, on the summit of Beacon Hill; and there, in the third house below Mount Vernon Place, February 16, 1838, a child was born, and christened later by his uncle, the minister of the First Church after the tenets of Boston Unitarianism, as Henry Brooks Adams.

Had he been born in Jerusalem under the shadow of the Temple and circumcised in the Synagogue by his uncle the high priest, under the name of Israel Cohen, he would scarcely have been more distinctly branded, and not much more heavily handicapped in the races of the coming century, in running for such stakes as the century was to offer; but, on the other hand, the ordinary traveller, who does not enter the field of racing, finds advantage in being, so to speak, ticketed through life, with the safeguards of an old, established traffic. Safeguards are often irksome, but sometimes convenient, and if one needs them at all, one is apt to need them badly. A hundred years earlier, such safeguards as his would have secured any young man's success; and although in 1838 their value was not very great compared with what they would have had in 1738, yet the mere accident of starting a twentieth-century career from a nest of associations so colonial—so troglodytic—as the First Church, the Boston State House, Beacon Hill, John Hancock and John Adams, Mount Vernon Street and Quincy, all crowding on ten pounds of unconscious babyhood, was so queer as to offer a subject of curious speculation to the baby long after he had witnessed the solution. What could become of such a child of the seventeenth and eighteenth centuries, when he should wake up to find himself required to play the game of the twentieth? Had he been consulted, would he have cared to play the game at all, holding such cards as he held, and suspecting that the game was to be one of which neither he nor any one else back to the beginning of time knew the rules or the risks or the stakes? He was not consulted and was not responsible, but had he been taken into the confidence of his parents, he would certainly have told them to change nothing as far as concerned him. He would have been astounded by his own luck. Probably no child, born in the year, held better cards than he. Whether life was an honest game of chance, or whether the cards were marked and forced, he could not refuse to play his excellent hand. He could never make the usual plea of irresponsibility. He accepted the situation as though he had been a party to it, and under the same circumstances would do it again, the more readily for knowing the exact values. To his life as a whole he was a consenting, contracting party and partner from the moment he was born to the moment he died. Only with that understanding—as a consciously assenting member in full partnership with the society of his age—had his education an interest to himself or to others.

As it happened, he never got to the point of playing the game at all; he lost himself in the study of it, watching the errors of the players; but this is the only interest in the story, which otherwise has no moral and little incident. A story of education—seventy years of it—the practical value remains to the end in doubt, like other values about which men have disputed since the birth of Cain and Abel; but the practical value of the universe has never been stated in dollars. Although every one cannot be a Gargantua-Napoleon-Bismarck and walk off with the great bells of Notre Dame, every one must bear his own universe, and most persons are moderately interested in learning how their neighbors have managed to carry theirs.

This problem of education, started in 1838, went on for three years, while the baby grew, like other babies, unconsciously, as a vegetable, the outside world working as it never had worked before, to get his new universe ready for him. Often in old age he puzzled over the question whether, on the doctrine of chances, he was at liberty to accept himself or his world as an accident. No such accident had ever happened before in human experience. For him, alone, the old universe was thrown into the ash-heap and a new one created. He and his eighteenth-century, troglodytic Boston were suddenly cut apart&mdashseparated forever&mdashin act if not in sentiment, by the opening of the Boston and Albany Railroad; the appearance of the first Cunard steamers in the bay; and the telegraphic messages which carried from Baltimore to Washington the news that Henry Clay and James K. Polk were nominated for the Presidency. This was in May, 1844; he was six years old; his new world was ready for use, and only fragments of the old met his eyes.

Of all this that was being done to complicate his education, he knew only the color of yellow. He first found himself sitting on a yellow kitchen floor in strong sunlight. He was three years old when he took this earliest step in education; a lesson of color. The second followed soon; a lesson of taste. On December 3, 1841, he developed scarlet fever. For several days he was as good as dead, reviving only under the careful nursing of his family. When he began to recover strength, about January 1, 1842, his hunger must have been stronger than any other pleasure or pain, for while in after life he retained not the faintest recollection of his illness, he remembered quite clearly his aunt entering the sick-room bearing in her hand a saucer with a baked apple.

The order of impressions retained by memory might naturally be that of color and taste, although one would rather suppose that the sense of pain would be first to educate. In fact, the third recollection of the child was that of discomfort. The moment he could be removed, he was bundled up in blankets and carried from the little house in Hancock Avenue to a larger one which his parents were to occupy for the rest of their lives in the neighboring Mount Vernon Street. The season was midwinter, January 10, 1842, and he never forgot his acute distress for want of air under his blankets, or the noises of moving furniture.

As a means of variation from a normal type, sickness in childhood ought to have a certain value not to be classed under any fitness or unfitness of natural selection; and especially scarlet fever affected boys seriously, both physically and in character, though they might through life puzzle themselves to decide whether it had fitted or unfitted them for success; but this fever of Henry Adams took greater and greater importance in his eyes, from the point of view of education, the longer he lived. At first, the effect was physical. He fell behind his brothers two or three inches in height, and proportionally in bone and weight. His character and processes of mind seemed to share in this fining-down process of scale. He was not good in a fight, and his nerves were more delicate than boys' nerves ought to be. He exaggerated these weaknesses as he grew older. The habit of doubt; of distrusting his own judgment and of totally rejecting the judgment of the world; the tendency to regard every question as open; the hesitation to act except as a choice of evils; the shirking of responsibility; the love of line, form, quality; the horror of ennui; the passion for companionship and the antipathy to society—all these are well-known qualities of New England character in no way peculiar to individuals but in this instance they seemed to be stimulated by the fever, and Henry Adams could never make up his mind whether, on the whole, the change of character was morbid or healthy, good or bad for his purpose. His brothers were the type; he was the variation.
As far as the boy knew, the sickness did not affect him at all, and he grew up in excellent health, bodily and mental, taking life as it was given; accepting its local standards without a diffi- culty, and enjoying much of it as keenly as any other boy of his age. He seemed to himself quite normal, and his companions seemed always to think him so. Whatever was peculiar about him was education, not character, and came to him, directly and indirectly, as the result of that eighteenth-century inheritance which he took with his name.

The atmosphere of education in which he lived was colonial, revolutionary, almost Cromwellian, as though he were steeped, from his greatest grandmother&rsquos birth, in the odor of political crime. Resistance to something was the law of New England nature; the boy looked out on the world with the instinct of resistance; for numberless generations his predecessors had viewed the world chiefly as a thing to be reformed, filled with evil forces to be abolished, and they saw no reason to suppose that they had wholly succeeded in the abolition; the duty was unchanged. That duty implied not only resistance to evil, but hatred of it. Boys naturally look on all force as an enemy, and generally find it so, but the New Englander, whether boy or man, in his long struggle with a stingy or hostile universe, had learned also to love the pleasure of hating; his joys were few.

Born in 1838 into the family of John Adams and John Quincy Adams, Henry Adams had the opportunity to pursue a wide-ranging variety of intellectual interests during the course of his life. Functioning both in the world of practical men and affairs (as a journalist and an assistant to his father, Charles Francis Adams), and in the world of ideas (as a prolific writer, the editor of the prestigious North American Review, and a professor of medieval, European, and American history at Harvard), Adams was one of the few men of his era who attempted to understand art, thought, culture, and history as one complex force field of interacting energies. 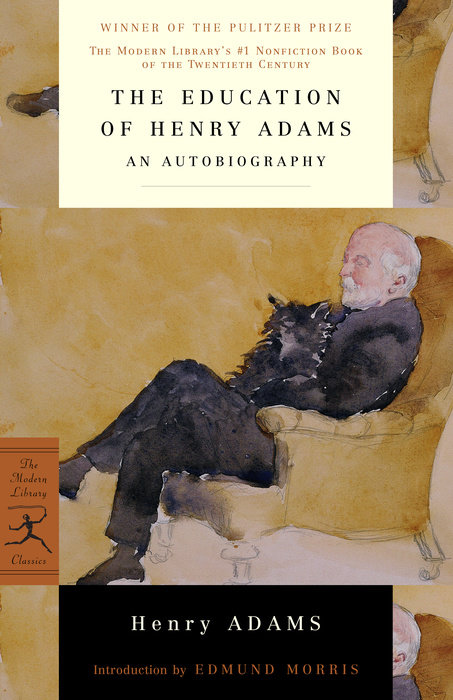