The federal government is ailing and needs a cure. The cure lies in embracing a principle long known to the American people but little recognized by Washington—until now: common sense.

In this pathbreaking report, Vice President Al Gore, presiding over the National Performance Review, at the request of President Clinton, charts a fundamental shift in how government conducts itself. This report understands that a government that recognizes who its real customers are, works with them to understand their needs, and puts them first, not last, is a government that deserves to govern.

An excerpt from Common Sense Government

PEOPLE SAID IT couldn’t be done. When President Bill Clinton announced in March 1993 that “the federal government is broken and we intend to fix it,” the old hands in Washington, D.C., shook their heads. You’ll never fix the federal government, they said. Been there, done that, doesn’t work.

When he announced a governmentwide initiative to “reinvent government” called the National Performance Review, the skeptics raised a collective eyebrow.

And six months later, when the National Performance Review’s first report—From Red Tape to Results: Creating a Government that Works Better and Costs Less, the blueprint for reinvention—was published, they sighed, “Another report for the shelf.”

But they didn’t count on the experts President Clinton called in to run the show.

CALLING IN THE REAL EXPERTS

If you want to make a real change, you have to engage the people most likely to be affected—the ones who are already involved and who have the most at stake in getting the job done right. You have to seek their advice and give them the power to fix what they—more than anyone else—know needs fixing.

The bigwigs who said the federal government couldn’t be reinvented had never talked to the real experts. When they said it couldn’t be done, they didn’t count on the folks who had been wanting the chance to do things right for years, the folks who had been trapped between the needs of the American people and the rigidity of the government bureaucracy.

• They didn’t count on Bill Freeman, the Occupational Health and Safety Administration’s man in Maine. Freeman’s inspection team won award after award for finding and fining worker safety violations, yet he knew injury rates weren’t improving. So he sat down with the companies with the most injuries, and negotiated agreements that would really work. Now, the companies’ own workers are finding and fixing 14 times as many hazards as Freeman’s people could have found. Worker injuries are dropping, and its costing less.

• They didn’t count on Bob Molino, director of procurement for the Defense Logistics Agency. Molino got fed up with 700-page specifications for chocolate chip cookies, massive and costly inventories of unused supplies languishing in government warehouses, and a rigid and senseless system of sealed bids for selecting suppliers. He keelhauled the whole system. Now Defense buys many of its supplies from normal commercial suppliers like everyone else does. And it’s using an electronic purchasing system so simple and inexpensive that other agencies are asking Defense to handle their purchases too.

• They didn’t count on Neil Jacobs, of the Immigration and Naturalization Service in Dallas. Jacobs decided it was crazy to surround a factory and arrest and deport immigrants with fraudulent papers. This only crippled the business that had unknowingly hired them—and the workers themselves simply returned a few weeks later. Now, Jacobs meets with the business owner, arranges for legal replacement workers at the same wages, and then deports the illegal immigrants—protecting the business and filling the vacancies the illegal immigrants might try to come back to claim. At last, business owners feel helped, not harassed.


Don’t believe it? Then believe the Ford Foundation and John F. Kennedy School of Government at Harvard, which named these and other federal reinvention initiatives as finalists for the prestigious Innovations in American Government awards this year.

THERE’S A WRONG WAY AND A RIGHT WAY

Sure, people have tried to reform the federal government before—almost a dozen times this century, and almost always unsuccessfully. But most of these earlier attempts went nowhere because they were done backwards: from the top down instead of the bottom up. They didn’t ask for ideas from the American public—or from the federal government’s own front-line workers, who try to serve the public every day. Most often, the efforts consisted of studies led by outsiders with no real stake in the results.

Doomed from the start, they failed. It could hardly have been otherwise.

As frustration with the federal government has mounted, some people, including many in Congress, have decided that the way to fix government is just to eliminate as much of it as possible. That might help bring the budget into line—or it might do no more than shift around a lot of organizational “boxes.” Much of the government would then simply continue operating as it always had.

The main problem with taking an axe to the federal government is that it won’t fix what remains. Government would be smaller, but it would still be as inflexible and bureaucratic. Cutting may treat a couple of symptoms, but it won’t cure the disease.

RECLAIMING GOVERNMENT “FOR THE PEOPLE”

Americans are frustrated, irritated, confused, even angry about our government—about the cost, and the hassle, and the inflexible rules, and the uncooperative attitude. But we’re even angrier that our great dream seems to be slipping away—the dream of a government that is “of the people, by the people, and for the people,” a government that isn’t “them” but “us.” And we don’t want to give up on that dream. It is what set us apart from the rest of human history nearly 220 years ago, when we declared independence from England, and it’s what we stand for throughout the world today.

And while the great debate continues over what government should do, we know what basics we expect to get: protection from enemies here and abroad, clean air and water, food that’s safe to eat and toys that are safe for our kids to play with, help in emergencies, safe workplaces, and so on. We don’t want to get rid of government; we want it to work better and cost less. We want it to make sense.

And we’re pretty clear about what common-sense government means:

• It means a government that focuses on results, that moves heaven and earth to make it easy for all of us—citizens, businesses, and state and local governments—to meet the nation’s common goals, instead of burying us in rules and punishing us when we can’t figure out how to comply.

• It means a government that recognizes that we are its customers, works with us to understand our needs, and puts us first, not last.

• And it means getting our money’s worth—a government that works better, faster, and cheaper than in the past, one that operates as well as, or better than, the best private businesses.

DELIVERING THE GOODS AT LAST

For two years, quietly but persistently, thousands of ordinary Americans—Americans who happen to work for the federal government—have been striving to change dramatically what the government does and how it does it. And folks who keep tabs on things—Business Week, Newsweek, The New York Times, and others—have been taking notice.

The New York Times calls it the “quiet revolution.” It’s pick-and-shovel work—hard, often tedious, but crucial. The plain fact is that if you want to change something big in a big way, you can’t get by with a little light landscaping and a coat of paint. You have to excavate and renovate. And you can’t do it overnight.

And progress is everywhere around us. In 1993, the Administration announced a goal to save $108 billion and cut 252,000 government jobs—especially administrative jobs that don’t serve people directly—in five years. (Congress and the President later raised this last goal to 272,900.) Both tasks are ahead of schedule: savings locked into place total $58 billion (53 percent of the goal), and job reductions total more than 160,000 (60 percent of the goal). Of the 1,250 recommendations in the 1993 blueprint, 379 (30 percent) have been implemented, 214 (17 percent) require legislative action, and 6157 (53 percent) are still in the pipeline. The Administration recently developed more than 180 additional recommendations that, when implemented, will result in $70 billion in new savings over the next five years. These savings have already been incorporated in President Clinton’s balanced budget proposal.

This report, Common Sense Government: Works Better and Costs Less, is a report to the American people on the progress of the “quiet revolution” to reinvent the federal government—what it is, how it’s going, and what it means for ordinary folks.

Former vice president Al Gore is co-founder and chairman of both Generation Investment Management and Current TV. He is also a senior partner at Kleiner Perkins Caufield & Byers, and a member of Apple Inc.’s board of directors. Gore spends the majority of his time as chairman of The Climate Reality Project, a nonprofit devoted to solving the climate crisis. Gore was elected to the U.S. House of Representatives four times and the U.S. Senate twice. He served eight years as vice president. He authored the bestsellers Earth in the Balance, An Inconvenient Truth, The Assault on Reason, Our Choice, and The Future. He is a co-recipient of the 2007 Nobel Peace Prize. 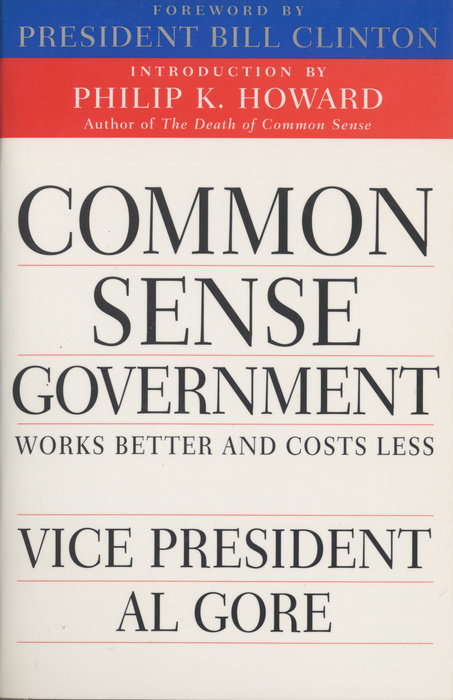