The truth is, not one of us is innocent. We all have sins to confess. So reveals Catherine de Medici, the last legitimate descendant of her family’s illustrious line. Expelled from her native Florence, Catherine is betrothed to Henri, son of François I of France. In an unfamiliar realm, Catherine strives to create a role for herself through her patronage of the famous clairvoyant Nostradamus and her own innate gift as a seer. But in her fortieth year, Catherine is widowed, left alone with six young children in a kingdom torn apart by the ambitions of a treacherous nobility. Relying on her tenacity, wit, and uncanny gift for compromise, Catherine seizes power, intent on securing the throne for her sons, unaware that if she is to save France, she may have to sacrifice her ideals, her reputation, and the secret of her embattled heart.

An excerpt from The Confessions of Catherine de Medici


I was ten years old when i discovered i might be a witch.

I sat sewing with my aunt Clarice, as sunlight spread across the gallery floor. Outside the window I could hear the splashing of the courtyard fountain, the cries of the vendors in the Via Larga and staccato of horse hooves on the cobblestone streets, and I thought for the hundredth time that I couldn’t stay inside another minute.

“Caterina Romelo de’ Medici, can it be you’ve finished already?”

I looked up. My late father’s sister Clarice de’ Medici y Strozzi regarded me from her chair. I wiped my brow with my sleeve. “It’s so hot in here,” I said. “Can’t I go outside?”

She arched her eyebrow. Even before she said anything, I could have recited her words, so often had she drummed them into my head: “You are the Duchess of Urbino, daughter of Lorenzo de’ Medici and his wife, Madeleine de la Tour, who was of noble French blood. How many times must I tell you, you must restrain your impulses in order to prepare for your future?”

I didn’t care about the future. I cared that it was summer and here I was cooped up in the family palazzo forced to study and sew all day, as if I might melt in the sun.

I clapped my embroidery hoop aside. “I’m bored. I want to go home.”

“Florence is your home; it is your birth city,” she replied. “I took you from Rome because you were sick with fever. You’re fortunate you can sit here and argue with me at all.”

“I’m not sick anymore,” I retorted. I hated it when she used my poor health as an excuse. “At least in Rome, Papa Clement let me have my own servants and a pony to ride.”

She regarded me without a hint of the ire that the mention of my papal uncle always roused in her. “That may be but you are here now, in my care, and you will abide by my rules. It’s midafternoon. I’ll not hear of you going outside in this heat.”

“I’ll wear a cap and stay in the shade. Please, Zia Clarice. You can come with me.”

I saw her trying to repress her unwilling smile as she stood. “If your work is satisfactory, we can take a stroll on the loggia before supper.” She came to me, a thin woman in a simple gray gown, her oval face distinguished by her large liquid-black eyes—the Medici eyes, which I had inherited, along with our family’s curly auburn hair and long-fingered hands.

She swiped up my embroidery. Her lips pursed when she heard me giggle. “I suppose you think it’s funny to make the Holy Mother’s face green? Honestly, Caterina; such sacrilege.” She thrust the hoop at me. “Fix it at once. Embroidery is an art, one you must master as well as your other studies. I’ll not have it said that Caterina de’ Medici sews like a peasant.”

I thought it best not to laugh and began picking out the offensive color, while my aunt returned to her seat. She stared off into the distance. I wondered what new trials she planned for me. I did love her but she was forever dwelling on how our family prestige had fallen since the death of my great-grandfather, Lorenzo Il Magnifico; of how Florence had been a center of learning renowned for our Medici patronage, and now we were but illustrious guests in the city we had helped build. It was my responsibility, she said, to restore our family’s glory, as I was the last legitimate descendant of Il Magnifico’s bloodline.

I wondered how she expected me to accomplish such an important task. I’d been orphaned shortly after my birth; I had no sisters or brothers and depended on my papal uncle’s goodwill. When I once mentioned this, my aunt snapped: “Clement VII was born a bastard. He bribed his way to the Holy See, to our great shame. He’s not a true Medici. He has no honor.”

Given his prestige, if he couldn’t restore our family name I didn’t know how she expected me to. Yet she seemed convinced of my destiny, and every month had me dress in my uncomfortable ducal finery and pose for a new portrait, which was then copied into miniatures and dispatched to all the foreign princes who wanted to marry me. I was still too young for wedlock, but she left me no doubt she’d already selected the cathedral, the number of ladies who would attend me—

All of a sudden, my stomach clenched. I dropped my hands to my belly, feeling an unexpected pain. My surroundings distorted, as if the palazzo had plunged underwater. Nausea turned my mouth sour. I came to my feet blindly, hearing my chair crash over. A terrifying darkness overcame me. I felt my mouth open in a soundless scream as the darkness widened like a vast ink stain, swallowing everything around me. I was no longer in the gallery arguing with my aunt; instead, I stood in a desolate place, powerless against a force that seemed to well up from deep inside me . . .

I stand unseen, alone among strangers. They are weeping. I see tears slip down their faces, though I can’t hear their laments. Before me is a curtained bed, draped in black. I know at once something horrible lies upon it, something I should not see. I try to stay back but my feet move me toward it with the slow certainty of a nightmare, compelling me to reach out a spotted, bloated hand I do not recognize as my own, part the curtains, and reveal

“Dio Mio, no!” My cry wrenched from me. I felt my aunt holding me, the frantic caress of her hand on my brow. I had a terrible stomachache and lay sprawled on the floor, my embroidery and tangled yarns strewn beside me.

As the strange sensation of having left my own body began to fade, I forced myself to sit up. “I don’t think it’s the fever,” I said. “I saw something: a man, lying dead on a bed. He was so real, Zia . . . it scared me.”

She stared at me. Then she whispered, “Una visione,” as if it was something she’d long feared. She gave me a fragile smile, reaching out to help me to my feet. “Come, that’s enough for today. Let us go take that walk, si? Tomorrow we’ll visit the Maestro. He’ll know what to do.”

C. W. Gortner holds an MFA in writing, with an emphasis on historical studies, from the New College of California. He is the internationally acclaimed and bestselling author of Mademoiselle Chanel, The Queen’s Vow, The Confessions of Catherine de Medici, The Last Queen, The Vatican Princess, and Marlene, among other books. He divides his time between Northern California and Antigua, Guatemala. To learn more about his work and to schedule a book group chat with him, please visit his website. 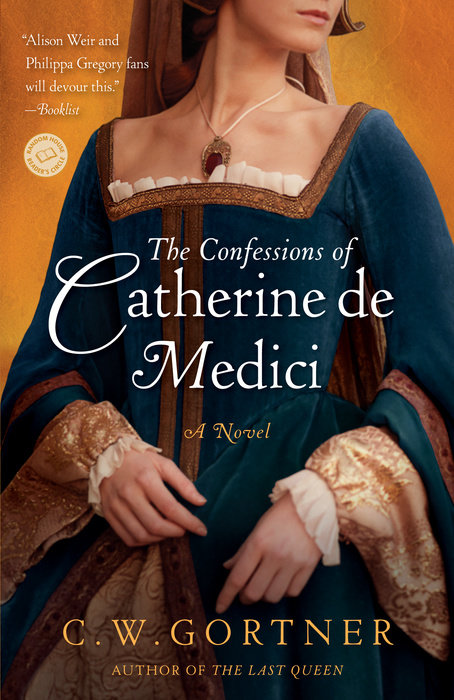