A remote hotel. A murder mystery. A missing woman. Everyone has a role to play, but what’s real and what’s part of the game?

“Jilly Gagnon’s well-crafted maze of clues and shifting realities is the perfect read for fans of Lucy Foley.”—Wendy Walker, bestselling author of All Is Not Forgotten

The weekend getaway at a gorgeous hotel should have been perfect. But Becca is smarting from her husband Blake’s betrayal and knows that the trip is just an expensive apology attempt. Still, the drinks are strong, and the weekend has an elaborate 1920s murder mystery theme. She decides to get into the spirit and enjoy their stay.

Before long, the game is afoot: Famed speakeasy songstress Ida Crooner is found “murdered,” and it’s up to the guests to sniff out the culprit. Playing the role of Miss Debbie Taunte, an ingenue with a dark past, Becca dives into the world of pun-heavy clues, hammy acting, and secret passages, hoping to take her mind off her marital troubles.

Then, the morning after they arrive, the actress playing Ida’s maid fails to reappear for her role. Everyone assumes she flaked out on the job, but when snooping for clues as “Debbie,” Becca finds evidence that the young woman may not have left of her own free will.

Told over a nail-biting forty-eight hours and interspersed with in-game clues, set pieces, and character histories from the flapper-filled mystery nested inside a modern one, All Dressed Up is a loving tribute to classic whodunits and a riveting exploration of the secrets we keep.

An excerpt from All Dressed Up

The scene out the passenger side window was like something off a New England postcard: trees rolling away in every direction, a patchwork quilt picked out in a cornucopia of fall shades, drawn up around the necks of the distant hillsides against the chill in the air. I cracked the window slightly, hoping for a hint of that fall scent, part woodsmoke and part decay. Which makes it sound morbid and terrible, but I’d wear it as perfume if someone could figure out how to bottle it. That, and whatever they use in those fir-­tree candles you find at the seriously overpriced boutiques around Christmas—­not the cheap Yankee Candle crap, the expensive soy ones by companies named after herbs. I want to live inside those candles.

“Remember the time we went camping around here?”

I glanced across the console at Blake. He pulled his eyes away from the road just long enough to flash his wry half-­smile at me, the one that brought out the dimple in his left cheek. The imbalance always made him look mischievous, as if he was plotting something he knew the powers that be would disapprove of. I used to get all melty describing his dimple to girlfriends, the feature that turned his boyishly handsome face interesting.

I thought back to that first camping trip, years ago now, just after we’d started dating. Blake had just started at Playpen, and the entire staff was on ramen-­subsistence wages, “one step below ramen-­profitable,” according to Blake. He was still in that decrepit walk-­up in Bushwick, we both still had roommates, and the need to f*** each other’s brains out was still at that semiferal level that only lasts a few months, maybe a year if you’re lucky. It had seemed like such a good idea—­a campfire, stars twinkling overhead, miles and miles of empty woods just waiting for us to defile them . . .

I raised an eyebrow, mouth twisting into a small smile.

“What was it the doctor said?”

“I believe his exact words were ‘Never seen poison ivy there before.’ ” Blake turned to me again, blue eyes sparkling. “But it was more his tone. Actually calling me a degenerate scumbag would have been redundant.”

“Well, you disappointed him, obviously.” A laugh burst out of me. “Remember the look on his face when I asked him to check me out? I don’t care how ancient the guy was, you’d think a doctor would be able to hear the word vagina without having an aneurysm.”

“To be fair, when he went to medical school, the preferred term was ‘portal of shame.’ I’m just lucky he prescribed calamine lotion instead of penance.”

Blake’s smile faltered for just a second, eyes narrowing, and just like that, there it was again, rearing up between us with a malevolent grin, Remember me? Of course I did, I couldn’t forget about it for more than a few seconds, the mass of everything we weren’t saying was so damned hulking I was surprised we’d been able to squeeze into the Prius alongside it.

I turned back to the window, jaw tightening in a way so familiar that lately it was starting to give me headaches.

“Don’t worry, I asked when I booked the room, genital rashes are not included with our package.”
I could almost hear the hopeful look in his eyes. With a monumental effort of will, I prised my jaw open wide enough to slip out a noncommittal “That’s good.”

A few minutes later, we pulled off the highway. A McDonald’s and a smattering of gas stations had sprouted around the exit ramp, but within a few blocks they gave way to folksy-­looking shops with hand-­painted signs advertising car repair prowess, hot coffee, or in one case, antiques and live bait. The obvious combo.

“I bet their milkshakes are good,” I said, pointing across the intersection. “Towns like this always have the best ice cream.”

“We don’t really have time to stop,” Blake said, mouth screwing off to the side. “We’re running late.”

“Fine.” I huffed out a breath through my nose.

“Did I say I wanted one?” My voice was getting noticeably tight. I could actually feel the pressure building behind my eyeballs. That couldn’t be healthy. “Anyway, we would have been on time if you’d grabbed the lunch I made us out of the fridge. Like I asked.”

“I already said I was sorry for that.”

“It’s fine. I don’t need a milkshake anyway.” Then I tilted my whole body toward the window, as though a wall of ribs and spine would somehow protect me from the curdled atmosphere in the car.

“Okay . . .” I could hear the defeat in his tone. An apology shot up like a gag reflex, but I swallowed it, relishing the acid burn at the back of my throat. I was not going to give in that easily. I always gave in. This whole weekend was me giving in, really.

And then, of course, came the guilt. Which was asinine—­I wasn’t the one that invited that foul, oxygen-­hogging monstrosity of what happened along—­but when has marriage ever been built around logic? Lately ours seemed to be built mostly on shared Netflix tastes, perched delicately atop an ever-­shifting sea of eggshells.

“Do you want to listen to a podcast?” My voice was barely a mumble.

Jesus Christ, how were we ever going to make it through this weekend if we couldn’t handle a four-­and-­a-­half-­hour car ride?

I pressed my forehead against the window as the soothing, vaguely nasal NPR cadences filled the dead space in the car, letting the colors outside blur together, go abstract.

The little therapist on my shoulder sounded so reasonable I almost let myself believe her.

“Mmm.” I felt too wrung out to trust myself with more words at the moment.

But as we made our way farther and farther from what passed for civilization this far upstate, I could feel myself lightening, my shoulders unslumping slightly. Every so often a thin gravel road would snake off through the trees, the tiniest bit of clapboard visible at the end of it. The mailboxes started getting more and more folk-­arty, their sides studded with moose and loon and canoe silhouettes. One was even held up by a miniature grizzly, his cheery face carved—­poorly—­out of an old tree stump. Anywhere else, they’d be tacky, but out here, they were . . .

Well, still tacky, but also kind of charming. A not-­small part of me would be thrilled to sink into a life of woodsy tastelessness, swathing my body and home in chunky cable knits so thick nothing bad could penetrate them.

Ahead of us, a giant carved wooden sign proclaimed millingham house. Blake nosed the car down the winding drive, the boughs of century-­old oaks and maples holding hands above our heads.

After about a half mile, he turned around a final bend and the house appeared.

Jilly Gagnon’s humor writing, personal essays, and op-eds have appeared in Newsweek, Elle, Vanity Fair, Boston magazine, McSweeney’s Internet Tendency, The Toast, and The Hairpin, among others. She is the author of the young adult novel #famous. She also co-writes the Choose Your Own Misery dark comedy series with Mike MacDonald. 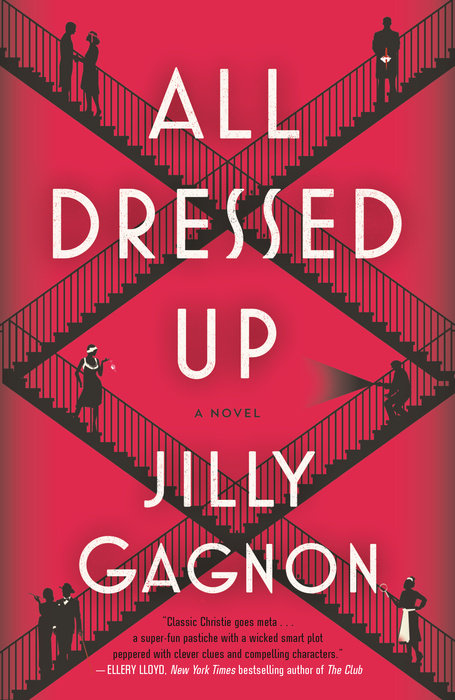