366 Meditations on Wanderlust, Discovery, and the Art of Travel

“Thought-provoking, encouraging, and inspiring” (Gretchen Rubin) reflections on the power of travel to transform our daily lives—from the iconoclastic travel writer, scholar, and author of Vagabonding

For readers who dream of travel, yearn to get back out on the road, or want to enrich a journey they’re currently on, The Vagabond’s Way explores and celebrates the life-altering essence of travel. Each day of the year features a one-page meditation on an aspect of the journey, anchored by words of wisdom from a variety of thinkers—from Stoic philosopher Seneca and poet Maya Angelou to Trappist monk Thomas Merton and Grover from Sesame Street.

Iconoclastic travel writer and scholar Rolf Potts embraces the ragged-edged, harder-to-quantify aspects of travel that inevitably change travelers’ lives for the better in unexpected ways. The book’s various sections mirror the phases of a trip, including

• dreaming and planning the journey: “All life-affecting journeys—and the unexpected wonders they promise—become real the moment you decide they will happen.”
• embracing the rhythms of the journey: “The most poignant experiences on the road occur in those quiet moments when we recognize beauty in the ordinary.”
• finding richer travel experiences: “Developing an instinct to venture beyond the obvious on the road allows you to see places as mysteries to be investigated.”
• expanding your comfort zone: “No moment of instant gratification can compare to savoring an experience that has been earned by enduring the adversity that comes with it.”

The Vagabond’s Way encourages you to sustain the mindset of a journey, even when you aren’t able to travel, and affirms that travel is as much a way of being as it is an act of movement.

An excerpt from The Vagabond's Way


AN INARTICULATE ACHE TO TRAVEL IS WORTH PAYING ATTENTION TO

Homesickness is a feeling many know and suffer from; I, on the other hand, feel a pain less well known, and its name is “Outsickness.” When the snow melts, the stork arises, and the first steamships race off, then I feel the painful travel unrest.

—Hans Christian Andersen, in an 1856 letter


Though the English word wanderlust—defined as “a strong desire to travel”—was borrowed from German in the early twentieth century, it actually has a slightly different connotation in its original tongue. The word lust implies “desire” in both languages, but while the German word wandern is often assumed to have a direct relation to the English word wander, its literal translation means “to hike.” A more descriptive German expression of the desire to travel is, in fact, fernweh, which combines fern, meaning “distant,” with weh, meaning “ache.”

Fernweh is perhaps best apprehended as “farsickness,” a kind of antonym to homesickness, or heimweh. In this way, fernweh can be understood as a quieter and more personal urge than wanderlust—?a persistent longing to escape the confinement of the familiar and give oneself over to unseen places and experiences. Fernweh is the ache to widen one’s horizons, to be at home in the unfamiliar—to begin anew, and reinvent oneself in the context of the as-yet-unknown.

While there is a certain vagueness to being homesick for the road—of longing to experience what you can’t quite describe, since it has yet to happen—a logical way to honor your feelings of fernweh is to quietly start planning a journey. In seeking to embrace unseen lands, you’ll allow yourself to embrace unseen parts of yourself.


AN INTANGIBLE SENSE OF WONDER IS A GREAT REASON TO TRAVEL

The best travel experiences are simple. They can’t be planned. It’s just a feeling of something genuine—knowing you’re lucky to be in exactly that place at exactly that instant.


In the fifteenth century, an Arabic manuscript entitled The Book of Hidden Pearls was said to contain directions to a hidden oasis known as Zerzura. Rumored to be located in the desert region west of the Nile, Zerzura was said to feature peaceful inhabitants, abundant gardens, and pristine white buildings.

Though no copies of The Book of Hidden Pearls existed by the time European Egyptologists began to dig for antiquities in Northern Africa, the location of Zerzura became a fixation for many early-twentieth-century travelers in the region. In 1929, Hungarian explorer Laszlo Almasy (who later became the fictionalized protagonist of Michael Ondaatje’s 1992 novel The English Patient) spent more than a year searching for Zerzura with a convoy of Ford Model A trucks, but found nothing beyond a few uninhabited rain oases.

In his 1935 book Libyan Sands, British explorer Ralph Bagnold (who had accompanied Almasy on the 1929 expedition) asserted that Zerzura was less significant as a mythical desert oasis than as a metaphor for the intangible sense of wonder that comes with an encounter with the unfamiliar. “I like to think of Zerzura . . . [as] an indefinite thing, taking different shapes in the minds of different individuals according to their interests and wishes,” he wrote, “. . . an excuse for the childish craving so many grown-ups harbor secretly to break away from civilization.”

As with Zerzura, sometimes our motivations for travel—the goals we have in mind for a given—are less important than the wondrous meanderings that await us on the road.


FIND WAYS TO MAKE YOUR TIME ON EARTH MIRACULOUS

Since time is the one immaterial object which we cannot influence—neither speed up nor slow down, add to nor diminish—it is an imponderably valuable gift.

—Maya Angelou, Wouldn’t Take Nothing for My Journey Now (1993)


Japanese conceptual artist On Karawa’s “Today” series, which began in 1966 and lasted for decades, consisted of several thousand hand-painted canvases that simply depicted the calendar date on which the painting was made. His “I Got Up” series consisted of postcards recording his daily wake-up time (as well as the date and his location) from 1968 to 1979. Another series consisted of telegrams sent to various friends over the course of several years, each bearing the lone phrase “I Am Still Alive.”

Though Karawa isn’t the only artist to have used a personal lens to explore the notion of time and its passing, the droll simplicity of his work has an uncanny way of accentuating the fleeting nature of aliveness. At the risk of oversimplifying the ancient Greek understanding of time, Karawa’s stubborn focus on the uniformity of chronos (sequential time) helps us understand that life’s most essential textures reside in kairos (decisive moments of action). Strip chronos of kairos, and one is left with a sense for how short our span of aliveness on earth can be.

Pondering Karawa’s work might well compel us to spend our days with a more deliberate sense of kairos—to break out of the fears and habits that keep us trapped in routines, as chronos ticks away, and embrace life as a miracle, rich in as-yet-unseen experiences.


LEAVING ON A JOURNEY IS A TIME-HONORED HUMAN RITE

—Joseph Campbell, The Hero with a Thousand Faces (1949)


Comparative mythologist Joseph Campbell is popularly remembered not for his academic achievements, but for his influence on the Star Wars movie franchise, which over the years has lovingly stolen its story templates from Campbell’s writings about the “monomyth.” Also known as the “Hero’s Journey,” the monomyth is a narrative archetype, common to cultures around the world, involving a protagonist who experiences a “call to adventure,” leaves the comfort of the familiar for unknown horizons, encounters challenges and wonders in distant places, and returns home transformed.

The Hero’s Journey formula made Star Wars popular with audiences because it explores ideals that are intrinsic to how we humans make narrative sense of who we are, who we want to be, and what in life is important. Myths predate humanity’s rational understanding of the world, and—unlike more modern ideologies and institutions—they don’t prescribe solutions so much as encourage action as a way to find purpose and fully engage with being alive.

In leaving home we don’t just seek new places: We seek truer versions of ourselves. In confronting a journey’s challenges, we don’t just face fears and navigate obstacles: We encounter a new level of awareness and a heightened sense of aliveness. In coming back renewed and enlightened, we don’t just see a once-familiar place in a new way: We arrive home better positioned to give back to the communities we left behind.


A JOURNEY IS A GOOD PRETEXT TO SEEK CHANGE IN LIFE

When someone makes a decision, he is diving into a strong current that will carry him to places he had never dreamed of when he first made the decision.


For as long as people have taken journeys, the desire to see new places has always been mixed up with a desire for personal transformation. When the German poet Johann Wolfgang von Goethe traveled to Italy in the late eighteenth century, he considered the journey to be as inward-focused as it was outward. “My purpose in making this wonderful journey is not to delude myself, but to discover myself in the objects I see,” he wrote. “Nothing, above all, is comparable to the new life that a reflective person experiences when he observes a new country. Though I am still always myself, I believe I have been changed to the very marrow of my bones.”

For many people, the decision to depart on a long-dreamed-of journey is tied in with life transition—not just the time-honored travel impetus of school graduation, but the end of an employment contract, the end of a relationship, or the beginning of a new sense of life purpose. At home, we spend so many hours trapped in routines and obligations—sitting at desks, sitting in traffic-clogged commutes, sitting in front of entertainment screens—that we lose track of who we are and who we might become. On the road, away from those routines and obligations, we can, at the very least, find perspective.

Hence, travel is not just a pretext to behold sights and have experiences you previously knew only in your imagination; it’s a chance to try out new versions of yourself as you come into a relationship with new places.

Rolf Potts is the author of Vagabonding: An Uncommon Guide to the Art of Long-Term World Travel. He has reported from more than sixty countries for National Geographic Traveler, The New Yorker, Outside, The New York Times Magazine, and the Travel Channel. Many of his essays have been selected as “Notable Mentions” in The Best American Essays, The Best American Nonrequired Reading, and The Best American Travel Writing. He is based in north-central Kansas, where he keeps a small farmhouse on thirty acres with his wife, Kansas-born actress Kristen Bush.

366 Meditations on Wanderlust, Discovery, and the Art of Travel 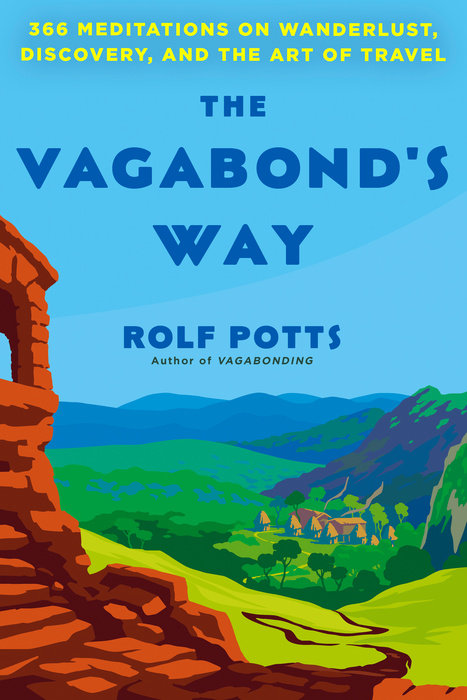