An “ingenious, horrifying” (The Guardian) first contact story by one of the twentieth century’s most brilliant—and neglected—science fiction and horror writers, whom Stephen King called “the best writer of science fiction that England has ever produced.”

“Few books capture the obscure, elliptical way that threats move from the background to the foreground of reality like The Kraken Wakes. . . . Feels all too familiar in today’s age of anti-vaxxer disinformation and QAnon conspiracists.” —Alexandra Kleeman, from the Introduction

What if aliens invaded and colonized Earth’s oceans rather than its land?

Britain, 1953: It begins with red dots appearing across the sky and crashing to the oceans’ deeps. At first, many people believe that these aliens are interested in only what’s down below. But when the polar ice-caps begin to melt, it becomes clear that these beings are not interested in sharing the Earth and that humankind might just be on the brink of extinction. . . .

An excerpt from The Kraken Wakes

I’m a reliable witness, you’re a reliable witness, practically all God’s children are reliable witnesses in their own estimation—which makes it funny how such different ideas of the same affair get about. Almost the only people I know who agree word for word on what they saw on the night of 15 July are Phyllis and I. And, as Phyllis happens to be my wife, people said, in their kindly way behind our backs, that I “over-persuaded” her: a thought and a euphemism that could only proceed from someone who did not know Phyllis.

The time was 11:15 p.m.; the place, latitude 35, some 24 degrees west of Greenwich; the ship, the Guinevere; the occasion, our honeymoon. About these facts there is no dispute. The cruise had taken us to Madeira, the Canaries, Cape Verde Islands, and had then turned north to show us the Azores on our way home. We, Phyllis and I, were leaning on the rail, taking a breather. From the saloon came the sound of the dance continuing, and the crooner yearning for somebody. The sea stretched in front of us like a silken plain in the moonlight. The ship sailed it as smoothly as if she were on a river. We gazed out silently at the infinity of sea and sky. Behind us the crooner went on baying.

“I’m so glad I don’t feel like him; it must be devastating,” Phyllis said. “Why, do you suppose, do people keep on mass-producing these decadent moanings?”

I had no answer ready for that one, but I was saved the trouble of trying to find one when her attention was suddenly caught elsewhere.

“Mars is looking pretty angry tonight, isn’t he? I hope it isn’t an omen,” she said.

I looked where she pointed at a red spot among myriads of white ones, and with some surprise. Mars does look red, of course, though I had never seen him look quite as red as that—but then, neither were the stars, as seen at home, quite as bright as they were here. Being practically in the tropics might account for it.

“Certainly a little inflamed,” I agreed.

We regarded the red point for some moments. Then Phyllis said:

“That’s funny. It seems to be getting bigger.”

I explained that that was obviously an hallucination formed by staring at it. We went on staring, and it became quite indisputably bigger. Moreover:

“There’s another one. There can’t be two Marses,” said Phyllis.

And sure enough there was. A smaller red point, a little up from, and to the right of, the first. She added:

She was right about that, too, and by this time the first one was glowing as the most noticeable thing in the sky.

“It must be a flight of jets of some kind, and that’s a cloud of luminous exhaust we’re seeing,” I suggested.

We watched all three of them slowly getting brighter and also sinking lower in the sky until they were little above the horizon line, and reflecting in a pinkish pathway across the water toward us.

We’ve both of us been asked many times since to describe them, but perhaps we are not gifted with such a precise eye for detail as some others. What we said at the time, and what we still say, is that on this occasion there was no real shape visible. The center was solidly red, and a kind of fuzz round it was less so. The best suggestion I can make is that you imagine a brilliantly red light as seen in a fairly thick fog so that there is a strong halation, and you will have something of the effect.

Others besides ourselves were leaning over the rail, and in fairness I should perhaps mention that between them they appear to have seen cigar-shapes, cylinders, discs, ovoids, and, inevitably, saucers. We did not. What is more, we did not see eight, nine, or a dozen. We saw five.

The halation may, or may not, have been due to some kind of jet drive, but it did not indicate any great speed. The things grew in size quite slowly as they approached. There was time for people to go back into the saloon and fetch their friends out to see, so that, presently, a line of us leaned all along the rail, looking at them and guessing.

With no idea of scale, we could have no judgment of their size or distance; all we could be sure of was that they were descending in a long glide which looked as if it would take them across our wake. The fellow next to me was talking know-all about St. Elmo’s fire to a partner who had never heard of St. Elmo and didn’t feel she had missed anything, when the first one hit the water.

A great burst of steam shot up in a pink plume. Then, swiftly, there was a lower, wider spread of steam which had lost the pink tinge, and was simply a white cloud in the moonlight. It was beginning to thin out when the sound of it reached us in a searing hiss. The water round the spot bubbled and seethed and frothed. When the steam drew off, there was nothing to be seen there but a patch of turbulence, gradually subsiding.

Then the second of them came in, in just the same way, on almost the same spot. One after another all five of them touched down on the water with great whooshes and hissings of steam. Then the vapor cleared, showing only a few contiguous patches of troubled water.

Aboard the Guinevere, bells clanged, the beat of the engines changed, we started to change course, crews turned out to man the boats, men stood by to throw lifebelts.

Four times we steamed slowly back and forth across the area, searching. There was no trace whatever to be found. But for our own wake, the sea lay all about us in the moonlight, placid, empty, unperturbed . . . 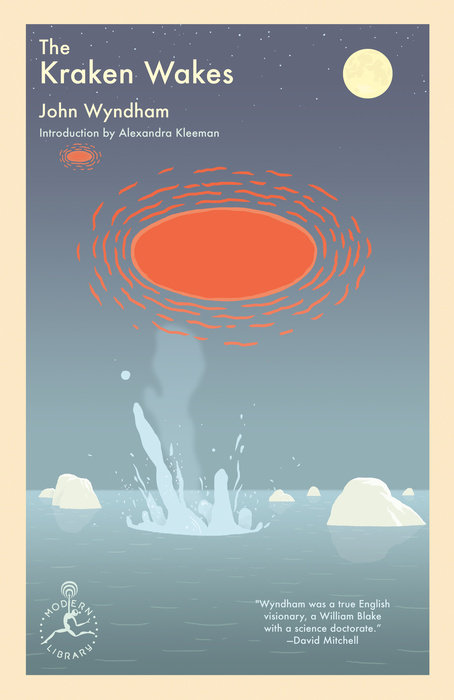