What if you knew someone you loved was going to die? What if you thought you could save them? How much would you risk to try?

Claire Randall has gone to find Jamie Fraser, the man she loved more than life, and has left half her heart behind with their daughter, Brianna. Claire gave up Jamie to save Brianna, and now Bree has sent her mother back to the mysterious Scottish warrior who was willing to give his life to save them both. But a chilling discovery in the pages of history suggests that Jamie and Claire’s story doesn’t have a happy ending.

Brianna dares a terrifying leap into the unknown in search of her mother and the father she has never met, risking her own future to try to change history . . . and to save their lives. But as Brianna plunges into an uncharted wilderness, a heartbreaking encounter may strand her forever in the past . . . or root her in the place she should be, where her heart and soul belong.

An excerpt from Drums of Autumn (25th Anniversary Edition)

A Hanging in Eden


I heard the drums long before they came in sight. The beating echoed in the pit of my stomach, as though I too were hollow. The sound traveled through the crowd, a harsh military rhythm meant to be heard over speech or gunfire. I saw heads turn as the people fell silent, looking up the stretch of East Bay Street, where it ran from the half-built skeleton of the new Customs House toward White Point Gardens.

It was a hot day, even for Charleston in June. The best places were on the seawall, where the air moved; here below, it was like being roasted alive. My shift was soaked through, and the cotton bodice clung between my breasts. I wiped my face for the tenth time in as many minutes and lifted the heavy coil of my hair, hoping vainly for a cooling breeze upon my neck.

I was morbidly aware of necks at the moment. Unobtrusively, I put my hand up to the base of my throat, letting my fingers circle it. I could feel the pulse beat in my carotid arteries, along with the drums, and when I breathed, the hot wet air clogged my throat as though I were choking.

I quickly took my hand down, and drew in a breath as deep as I could manage. That was a mistake. The man in front of me hadn’t bathed in a month or more; the edge of the stock about his thick neck was dark with grime and his clothes smelled sour and musty, pungent even amid the sweaty reek of the crowd. The smell of hot bread and frying pig fat from the food vendors’ stalls lay heavy over a musk of rotting seagrass from the marsh, only slightly relieved by a whiff of salt-breeze from the harbor.

There were several children in front of me, craning and gawking, running out from under the oaks and palmettos to look up the street, being called back by anxious parents. The girl nearest me had a neck like the white part of a grass stalk, slender and succulent.

There was a ripple of excitement through the crowd; the gallows procession was in sight at the far end of the street. The drums grew louder.

‘‘Where is he?’’ Fergus muttered beside me, craning his own neck to see. ‘‘I knew I should have gone with him!’’

‘‘He’ll be here.’’ I wanted to stand on tiptoe, but didn’t, feeling that this would be undignified. I did glance around, though, searching. I could always spot Jamie in a crowd; he stood head and shoulders above most men, and his hair caught the light in a blaze of reddish gold. There was no sign of him yet, only a bobbing sea of bonnets and tricornes, sheltering from the heat those citizens come too late to find a place in the shade.

The flags came first, fluttering above the heads of the excited crowd, the banners of Great Britain and of the Royal Colony of South Carolina. And another, bearing the family arms of the Lord Governor of the colony.

Then came the drummers, walking two by two in step, their sticks an alternate beat and blur. It was a slow march, grimly inexorable. A dead march, I thought they called that particular cadence; very suitable under the circumstances. All other noises were drowned by the rattle of the drums.

Then came the platoon of red-coated soldiers and in their midst, the prisoners.

There were three of them, hands bound before them, linked together by a chain that ran through rings on the iron collars about their necks. The first man was small and elderly, ragged and disreputable, a shambling wreck who lurched and staggered so that the dark-suited clergyman who walked beside the prisoners was obliged to grasp his arm to keep him from falling.

‘‘Is that Gavin Hayes? He looks sick,’’ I murmured to Fergus.

‘‘He’s drunk.’’ The soft voice came from behind me, and I whirled, to find Jamie standing at my shoulder, eyes fixed on the pitiful procession.

The small man’s disequilibrium was disrupting the progress of the parade, as his stumbling forced the two men chained to him to zig and zag abruptly in order to keep their feet. The general impression was of three inebriates rolling home from the local tavern; grossly at odds with the solemnity of the occasion. I could hear the rustle of laughter over the drums, and shouts and jeers from the crowds on the wrought-iron balconies of the houses on East Bay Street.

‘‘Your doing?’’ I spoke quietly, so as not to attract notice, but I could have shouted and waved my arms; no one had eyes for anything but the scene before us.

I felt rather than saw Jamie’s shrug, as he moved forward to stand beside me.

‘‘The man’s a Scot, wee Fergus.’’ Jamie’s voice was as calm as his face, but I heard the small note of strain in it. ‘‘Whisky’s what he wanted.’’

‘‘A wise choice. With luck, he won’t even notice when they hang him,’’ Fergus muttered. The small man had slipped from the preacher’s grasp and fallen flat on his face in the sandy road, pulling one of his companions to his knees; the last prisoner, a tall young man, stayed on his feet but swayed wildly from side to side, trying desperately to keep his balance. The crowd on the point roared with glee.

The captain of the guard glowed crimson between the white of his wig and the metal of his gorget, flushed with fury as much as with sun. He barked an order as the drums continued their somber roll, and a soldier scrambled hastily to remove the chain that bound the prisoners together. Hayes was jerked unceremoniously to his feet, a soldier grasping each arm, and the procession resumed, in better order.

There was no laughter by the time they reached the gallows—a mule-drawn cart placed beneath the limbs of a huge live oak. I could feel the drums beating through the soles of my feet. I felt slightly sick from the sun and the smells. The drums stopped abruptly, and my ears rang in the silence.

‘‘Ye dinna need to watch it, Sassenach,’’ Jamie whispered to me. ‘‘Go back to the wagon.’’ His own eyes were fixed unblinkingly on Hayes, who swayed and mumbled in the soldiers’ grasp, looking blearily around.

The last thing I wanted was to watch. But neither could I leave Jamie to see it through alone. He had come for Gavin Hayes; I had come for him. I touched his hand.

Jamie drew himself straighter, squaring his shoulders. He moved a pace forward, making sure that he was visible in the crowd. If Hayes was still sober enough to see anything, the last thing he saw on earth would be the face of a friend.

He could see; Hayes glared to and fro as they lifted him into the cart, twisting his neck, desperately looking.

‘‘Gabhainn! A charaid!’’ Jamie shouted suddenly. Hayes’ eyes found him at once, and he ceased struggling.

The little man stood swaying slightly as the charge was read: theft in the amount of six pounds, ten shillings. He was covered in reddish dust, and pearls of sweat clung trembling to the gray stubble of his beard. The preacher was leaning close, murmuring urgently in his ear.
Then the drums began again, in a steady roll. The hangman guided the noose over the balding head and fixed it tight, knot positioned precisely, just under the ear. The captain of the guard stood poised, saber raised.

Suddenly, the condemned man drew himself up straight. Eyes on Jamie, he opened his mouth, as though to speak.

The saber flashed in the morning sun, and the drums stopped, with a final thunk! 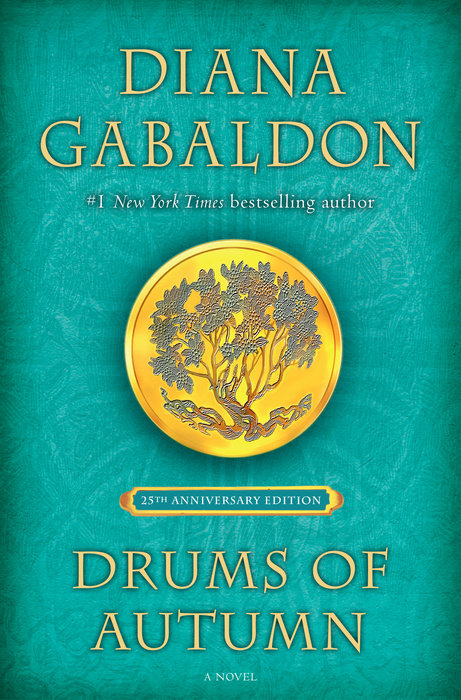