A hard science fiction masterpiece, perfect for fans of Kim Stanley Robinson, by one of the twentieth century’s most brilliant—and neglected—writers, whom Stephen King called “the best writer of science fiction that England has ever produced.”

What does the future hold for a species torn between exploration—the outward urge—and apparent self-destruction?

First published in 1959, The Outward Urge follows members of the Troon family as humanity extends its reach into space. The first vignette follows a Troon to a British space station in 1994; the next to the Moon bases as Earth experiences nuclear war; then to Mars and Venus landings, when Brazil is the only world power; and finally to the asteroids.

An excerpt from The Outward Urge

Ticker Troon emerged from his final interview filled with an emulsion of astonishment, elation, respect, and conviction that he needed refreshment.

The interview had begun formally, as he had expected. Announced by the clerk, he had marched in smartly, and come to attention before the wide desk. The old boy behind it had turned out to be a considerably older boy than he had been prepared for, but his type was authentic. Lean, he was, with a handsome, slightly weathered, aristocratic face, carefully trimmed hair that was quite white, and rows of ribbons on his left breast.

He had raised his eyes from a clipful of forms to inspect his visitor carefully, and even at that point Ticker had begun to have a suspicion that the interview was not going to be entirely routine, for the old boy—or, to identify him more fully, Air Marshal Sir Godfrey Wilde—did not employ simply that keen-eyed air of summing one’s man up at leisure and appearing incompletely satisfied, which had been the drill at lower grades of interviews. He was really looking at Ticker as a person, and somewhat oddly, too. Still looking, he nodded slowly to himself two or three times.

Ticker had been startled.

He had gone on regarding Ticker steadily, with a length of inspection that passed the bounds of custom, and of comfort. Ticker grew embarrassed, and had to resist the temptation to shift uneasily. The old boy became aware of the awkwardness. His face relaxed into a smile that was friendly, and reassuring.

“Forgive me, my boy. I was fifty years away,” he said.

He glanced down at the forms. Ticker recognized some of them. His whole history was there. Troon, G. M., aged twenty-four, single, C. of E. Parentage . . . education . . . service details . . . medical report . . . C.O.’s report . . . security report, no doubt . . . probably a private-life report . .  . notes on friends, and so on, and so on . . . Quite a bundle of stuff, altogether. The old boy evidently thought so too, for he pushed it all aside with a touch of impatience, waved his hand at an easy chair, and slid over a silver cigarette-box.

“Sit down there, my boy,” he invited.

“Thank you, sir,” Ticker had said. And he had taken the offered cigarette, doing his best to give an impression of ease.

“Tell me,” said the old boy, in a friendly tone, “what made you apply for transfer from Air to Space?”

It was an expected, standard question, to which there was a standard answer, but it was not put in the standard way, and, with the man’s eye thoughtfully upon him, Ticker decided against giving the standard reply. He frowned, a little uncertainly.

“It isn’t easy to explain, sir. In fact, I’m not honestly sure that I know. It—well, it isn’t that I had to do it. But there is a kind of inevitable feeling about it—as if it were a thing I was bound to do, sooner or later. My natural next step . . .”

“Next step,” repeated the Air Marshal. “Not your crowning ambition, then? Next step toward what?”

“I don’t really know, sir. Outwards, I think. There’s a sort of sense I can’t explain . . . a kind of urge onwards and outwards. It is not a sudden idea, sir. It seems always to have been there, at the back of my mind. I’m afraid it all sounds a bit vague . . . .” He let himself trail off, inadequately.

But the old boy did not seem to find it inadequate. He gave a couple of his slow nods, and leaned back in his chair. For a few moments he gazed up at the cornice of the ceiling, seeming to search his memory. Presently, he said:

“. . . for all the night
I heard their thin gnat-voices cry
Star to faint star across the sky.”

He brought his gaze down to Ticker’s surprised face.

“That mean anything to you?” he asked.

“I was told it was Rupert Brooke—though I’ve never found the context. But the man I first heard it from was your grandfather.” 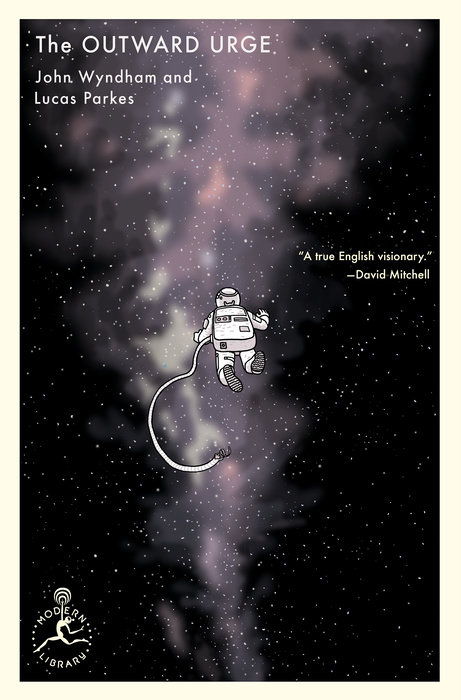