A Memoir of My Foremothers in Verse

An “extraordinary” (Laurie Halse Anderson) young poet traces the lives of her foremothers in West Tennessee, from those enslaved centuries ago to her grandmother, her mother, and finally herself, in this stunning debut celebrating Black girlhood and womanhood throughout American history.

“A masterpiece that beautifully captures the heartbreak that accompanies coming of age for Black girls becoming Black women.”—Evette Dionne, author of Lifting as We Climb, longlisted for the National Book Award

Walking Gentry Home tells the story of Alora Young’s ancestors, from the unnamed women forgotten by the historical record but brought to life through Young’s imagination; to Amy, the first of Young’s foremothers to arrive in Tennessee, buried in an unmarked grave, unlike the white man who enslaved her and fathered her child; through Young’s great-grandmother Gentry, unhappily married at fourteen; to her own mother, the teenage beauty queen rejected by her white neighbors; down to Young in the present day as she leaves childhood behind and becomes a young woman.

The lives of these girls and women come together to form a unique American epic in verse, one that speaks of generational curses, coming of age, homes and small towns, fleeting loves and lasting consequences, and the brutal and ever-present legacy of slavery in our nation’s psyche. Each poem is a story in verse, and together they form a heart-wrenching and inspiring family saga of girls and women connected through blood and history.

Informed by archival research, the last will and testament of an enslaver, formal interviews, family lore, and even a DNA test, Walking Gentry Home gives voice to those too often muted in America: Black girls and women.

An excerpt from Walking Gentry Home

This home of mine lies in the steam that rolls off the hot water cornbread. It is singed fingertips from tinfoil-wrapped fried bologna sandwiches. It is tiptoeing barefoot to the ice cream truck over old sienna pavement. It is the best Dollar General on either side of the Mississippi. My home is the one-to-one pickup-truck-to-people ratio; everyone in this town has their all-wheel-drive alter ego. My home is in the honey mustard that sticks to the lid of the to-go packets that come with Exxon fried chicken. In my home even the gnats move slow, just taking their time. You can see the heat if you look hard enough. It leaves you sweating like a sinner in the Lord’s house. My home has a patina like a skillet of cast iron, a thousand times seasoned, a million times fired. My home is a tiny town in West Tennessee that for centuries you could barely find on a map. I carry it with me always.

Halls is the town where my mothers have lived since their beginning in this country. The kind of place where everyone is family. It’s where I found God, the second time. It’s the place that taught me love is unconditional and unrelenting. The people I love that thrived there die with the changing seasons. I watch the thrift shops and candy stores get boarded up and fade into phantoms of their former selves. I have been shaped by the way towns die because it taught me legacies can be forever. I wonder if it’s healthy to love a thing that’s as good as dead.

In Halls, I am the bearer of a prophecy. From the moment Momma’s body opened, they said I was the one they waited for. They say I’m the culmination of a thousand generations of brilliant women, prayers, internal warfare, deferred dreams. They have told me I am every voice and poem that never graced a page, or another’s ears and eyes. And because I bear this prophecy, I think it’s my fault every time one of their dreams dies.


This multigenerational memoir in verse chronicles the lineage of a group of Black women and girls in West Tennessee, from unrecorded history to the 1700s up to my life in the present day. These are not just any girls, however; they are my foremothers. In the beginning, we have a series of poems about my ancestors whose names we no longer know, before arriving at my several-greats-grandmother Collie, the child of an enslaved woman and her enslaver in the days when Tennessee was still primarily wilderness. We follow a teenage Gentry, my greatgrandmother, as she moves out of her mother’s home to marry at fourteen; my grandmother when she had my mother at seventeen; my mother, the beauty queen; and finally, we come to the present day, with me, attempting to recover the legacy of the then-teenage girls whose lives of hard work and limited opportunity led to the now-teenage me writing their longforgotten history.

The only way to tell this story is through poetry, because Black girlhood is eternally laced with rhythm, from the Negro hymns Amy Coleman whispered as she bore her enslaver’s child to the rhythm of the gospel my mother sang at fifteen when she was hailed a child prodigy.

Walking Gentry Home is a story about girlhood and how the world scoffs at the way Black women come of age. It is an American story that persists, and we persist in ignoring it. The innocence and adolescence of Black girls are stories that are desperately needed because Black girls begin being called women far before they know what women really are.

This is for them—and for me.

Alora Young is a college student, an actor, and the Youth Poet Laureate of the Southern United States. Her poetry has appeared in The New York Times and The Washington Post, and she has performed her poetry on CNN, CBS, and the TEDx stage. Originally from Tennessee, Young currently attends Swarthmore College in Pennsylvania.

A Memoir of My Foremothers in Verse 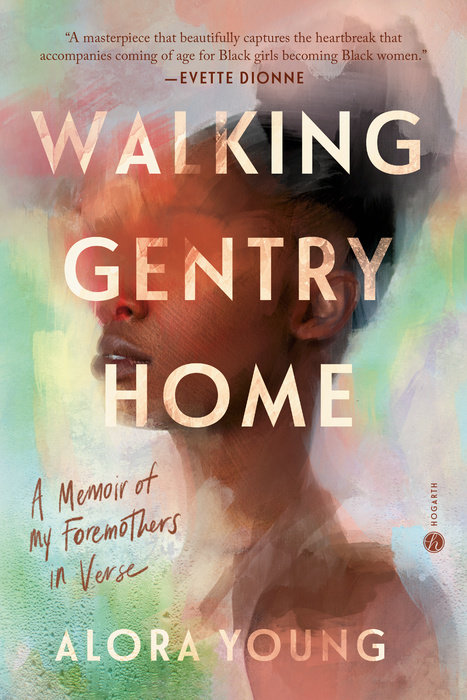