An immersive debut set across the temples, slums, and gated estates of late-twentieth century Bangkok, telling the story of three families striving to control their destinies in a merciless, sometimes brutally violent, metropolis.

“Mai Nardone is a writer with an atlas straight to the heart. I did not want to put this book down and neither will you.”—C Pam Zhang, bestselling author of How Much of These Hills Is Gold

We came with the drought. From the window of the train, the rich brown of the Chao Phraya River marked the turn from the northeast into the central plains. We came for Bangkok on the delta. The thin tributaries that laced the provinces found full current at the capital. And in the city, we’d heard, the wealth was wide and deep.

In 1980, young lovers Pea and Nam arrive in Bangkok in search of a life, and a world, beyond Thailand’s rural outskirts. Thirty days, they promise each other. Thirty days for Pea to find work, for him to put aside his violent and unstable past and take root in this strange new land. But Bangkok does not want for male laborers, especially teenage boys with thick provincial accents, and when time finally runs out on their promise, it’s Nam who ultimately adapts to the capital’s ruthless logic and survives.

Spanning decades and perspectives, seamlessly shifting between the absurd and the tenderhearted, the interwoven stories of Welcome Me to the Kingdom introduce three families—Nam, her American husband, Rick, and their daughter, Lara; Vitat, a Thai Elvis impersonator, and his only daughter, Pinky; and Tintin and Benz, orphans who have adopted each other as brothers—who employ various schemes to lie, betray, and seduce their way to the “good life.”

These disparate citizens of Bangkok orbit each other over the next three decades—sometimes violently, passionately colliding. Through skin-whitening routines, cult conversion, gambling, and sex work, the collection’s characters look for reinvention in a city buckling under the weight of its own modernity.

Wildly imaginative and ambitious, Mai Nardone’s stories reveal the growing discrepancy between Bangkok’s smiling self-image and its ugly underbelly, and, in the process, offer a striking portrait of a city unmade by the whims of global capitalism, in a kingdom caught between this world and the next.

An excerpt from Welcome Me to the Kingdom

The coins Pea wouldn’t spend had worried a hole through his pocket, so he was jingling them in his fist as he passed the pawn shop that sold foreign liquor by the shot. The bottles were dusty, proof of another life in some formerly rich man’s cabinet.

“Always the last to go, the liquor,” the old pawnbroker said to Pea. “You know when they bring the whiskey they’ve hit the bottom. Sell their wives first, most of them.”

“This is the real stuff, right?” Pea asked. “You’re not just reusing the bottles? I know the taste of Mekhong.”

“It’s from Kentucky, USA,” the old man said, holding the indecipherable label out to Pea.

“Well, in Kentucky, USA, they must use this to run cars.” Pea spread the rest of his money on the glass cabinet. “Another?”

Nam had given him a deadline: thirty days. That was how long he had to make them a living. Tucked in Pea’s breast pocket was a page from a free Chinese calendar, the numbers smudged by sweat. Sixteen inky days already blued away by his thumb. Sixteen days since he and Nam had come down on the train together, down from the northeast to Bangkok. Since then, Nam had been staying with her last living kin, a cousin, while Pea roomed at a boardinghouse apartment with other men from the provinces, what counted to him now as family. They worked security, gardening, driving—all of it better than the wet suck of the rice paddies in the northeast, the shining white flats of the salt pans along the coast, the hot pools of the shrimp farms across the central plains. The men had traded that work for slow days and shade, for nights sharing food on the plastic mat, talking women and money, pooling their daydreams. Pea contributed what he could, except his worry for Nam. He needed her to himself. Sixteen days spent.

“He updates the video monthly,” one boarder had told Pea. “But this month it’s a squealer.”

Pea could hear it wasn’t Thai.

For two weeks Pea had listened nightly to the same movie, counting down the VHS’s two-hour capacity. And when he couldn’t bear another performance, he forced himself outside.

Which is how he found himself, on night sixteen, hovering by a flower market, drawn there by its fluorescent sting, by the ant line of laborers shuttling huge cane baskets. There was a buyer, too, marked by his good shoes, the way he skirted puddles. Pea looked for a foreman. He was looking for work.

The market was busiest after sundown, without the daytime heat on those neat flowers in foam boxes, petals spritzed, glistening like first-world candy. Not the thorny, twisted sentinels of the up-country temple where Pea was fostered, here was something imported from a lush planet.

“China,” a laborer told him. He said the blue anchan and white jasmine buds were local, but the roses and orchids came from abroad.

Pea said he needed work. Anything.

The man gestured. “That’s the boss in the blue.”

Soon after, Pea began a hard night lugging flowers by the kilo and basket from truck bed to stalls, bearing supplies for the wreath‑makers—two lines of women with pincers for fingers threading jasmine buds onto long needles. When he finished that, the foreman had him packing ice. He was the only worker without a cart to trundle the weight, so Pea managed on his back alone.

At the end of the night he stood at attention before the boss, heels together. He wanted to look tidy, fresh, but his hands were blue from the iceboxes, left shoulder soaked where it had borne the ice sacks. The man counted out Pea’s pay twice, rubbed each bill between his fingers and splayed them on the table.

Pea picked up the bills and made a show of looking around the room. “How much are you paying these men?” he asked, gesturing.

Pea divided his money and laid half of it back on the table. “Yeah, well, I’ll work twice as hard as them for half the pay if you’ll hire me full-time.”

“Twenty,” Pea lied. He could barely pass for the eighteen he actually was, but the man gave him the work anyway.

On his way out of the warehouse Pea saluted the laborer who had first ushered him in. Then he tucked a vine of bougainvillea under his shirt for Nam. Only, by the time he got them to her, the papery flowers had turned to pulp in his palms. She liked them, she assured him.

“Let’s have breakfast at that stall you like,” he said. “My treat.”

The sun had risen by now, but the city buildings, wreathed in smog, eclipsed the show. He paid extra for one egg each to stir into the murk of their porridge. “Flowers like you’ve never seen before,” he told Nam. “The expensive ones they keep in refrigerators, like food.”

She twined the bougainvillea in her fingers and picked at her porridge.

Pea shook white pepper into his, then vinegar and soy sauce. He offered her the condiments. “No? You want it plain like that?”

“But eat the egg at least.” He didn’t want to remind her of the price of food. Three weeks into the monsoon season and still no rain. Even in Bangkok people looked hopefully at the clear skies.

She had been dragging this mood around ever since they arrived, by turn worried or distant. She asked about his fellow boarders and he passed her details, never mentioning the landlord. Not that Nam wasn’t used to him relaying sex talk. The lives of temple boys back in the northeast was sex talk. Nightly the boys paraded past the one sex bar on their side of town, a karaoke place with tinted windows and an English sign: Happy 2 You. Thumping and hooting, the boys would romp by, tripping one another in front of the door, hoping it might swing in as they passed. But that was different. Those women were locals. The landlord’s taped women were white, and Pea couldn’t say why, but the videos were to him somehow a violation.

“Is it your cousin?” Pea asked. “You staying up to watch TV with him?”

Pea swallowed. He pulled the calendar page from his pocket. “You promised thirty days.” His circled the number with his finger. “I can take care of us.”

“It will be. See how fast this place is changing?”

He took Nam’s bowl from her and stacked it over his empty one. “If you’re just going to waste this, I’ll eat it. Look, just give me time with the job. Who knows what kind of work that cousin wants to find you.”

“Except you don’t. You don’t understand.” His job was a beginning for them, and he wanted her to see that it was good.

That night he brought her to the flower market.

“Hey!” Pea gestured over to his coworker. “This is my girlfriend.”

Nam was distant; she wouldn’t enter the warehouse.

“I’m not even on duty yet. Look at these.” They were flanked by the red eyes of a hundred roses. “Just buds, see, but soon they’ll bloom.” He pulled one free of its newspaper bunch. “Here. For you! Oh, watch the thorns, ha ha!”

“Are these from China?”

“I think so. Take it home. Or take a whole bunch for your cousin. Here—”

“It’s free. Don’t worry. The boss likes me and he lets me take things home. These will wilt soon, anyway. And then they’ll just throw them away. Isn’t that funny? They come all this way just to live a few days.”

Every morning that week, returning from the warehouse at sunrise, Pea brought Nam stolen flowers. Like a bird adding strips of cotton, foam, twigs, and newspaper to a nest, Pea made his best effort to construct their new life.

Mai Nardone is a Thai and American writer whose work has appeared in American Short Fiction, Granta, McSweeney’s Quarterly, Ploughshares, and elsewhere. He lives in Bangkok. Welcome Me to the Kingdom is his first book. 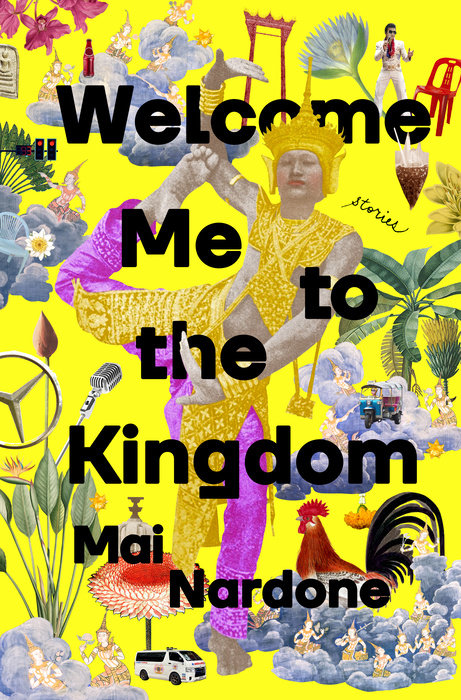