Rajah would do anything to be a great adventurer. But how can he, when his father’s already triumphed over every adventure he can think of? Lord Maharajah fought the Ender Dragon, charted the Overworld, and built a grand manor house. Rajah is surrounded by hand-me-downs, from his father’s fancy old name to his fancy old sword.

His servant, Pal, and his squire, Faith, do what they can to help. But Pal is too gentle to be any good in a fight, and Faith’s faith is being tested by the knight she thought was a hero. Try as he might, Rajah isn’t anyone’s hero—he’s everyone’s punchline.

Everything changes, though, when, at the end of another day’s failure, Rajah, Pal, and Faith find something: a map that leads to the one place Lord Maharajah never conquered—a legendary castle rumored to hide a mysterious lost civilization’s wondrous inventions.

At last, the greatest adventure of their lives has begun. The three must trek through perilous swamps, climb high mountains, and discover their true worth. It’s the only way to reach their distant destination: Castle Redstone!

An excerpt from Minecraft: Castle Redstone

“Sorry, sire. I’ll be more careful. It’s just these arrows are a little tricky to get out. Just lie still for a minute longer. Just one more.”

Pal took firm hold of the last arrow. How had they gotten so many right on target? Three straight into Sir Rajah’s backside? Good thing there was a lot of padding there or else he could have been badly hurt. He gave it a gentle twist . . . “You’re being very brave.”

Pal held the final arrow up. “There! All done!”

He tossed it onto the fire and rummaged around in his backpack. “We’re running low on food. We need to head into town and buy some more.”

Faith poked the flames to get more life out of them. “With what? We haven’t gathered any treasure in weeks. All we’ve been doing is running away, like we did tonight.”

“There were more of those skeletons than we could handle!” snapped Sir Rajah as he tried to pull up his pants. “And we did not run away. We carried out a tactical retreat! It’s not the same thing at all.” He scoffed. “Anyway, you wouldn’t understand such military terms.”

“I understand that if we’d done what I suggested, hid among the trees, we wouldn’t have gotten surrounded,” replied Faith, sullenly.

Rajah scoffed. “Hide? Like cowards? That’s not the way of heroes. True heroes face their enemies, stout in heart and sword in hand. Where is my sword?”

Pal picked up the diamond blade. “Here you go, sire. Be careful with it. Heartbreaker’s looking a bit . . . crooked.”

“Nonsense! This is still the greatest weapon in the realm!” Sir Rajah waved it in a big figure eight. “Those skeletons wouldn’t stand a chance now. I’d chop them up, reduce them to nothing but piles of bone dust!”

“Of course you would. They just caught us unawares. They basically cheated. No skeleton mob could stand against the great Sir Rajah and the mighty Heartbreaker, sword of heroes!”

“That’s right!” declared Sir Rajah, stabbing the air ferociously. “If they came now I’d slaughter them all! I’d—what was that?”

There was a noise coming from outside the cast of the light from the campfire. Pal grabbed his own weapon, a crude and clumsy stone axe, and peered deeper into the darkness. Something was out there. They’d all heard the crack of a footstep on a brittle twig. The others stood, Sir Rajah moaning as he pulled his pants up over his injured buttocks. Faith stood beside him with her arrow nocked.

Pal looked at his two companions. How had they ended up like this? They’d left the manor house with such ambitions. They were going to be heroes! They were set on defeating monsters, rescuing the needy, and gathering a towering treasure hoard. But it had degenerated quickly into nights sleeping in the rain, cold and frosty mornings, and bland kelp for meals. Who knew Sir Rajah would be so squeamish about killing animals for food? What he’d give for a few mutton chops right now.

Maybe they needed to admit they weren’t up for it. Not everyone was destined to be a hero. They could pack up and go home. Lord Maharajah would take them back, wouldn’t he? Deep down he’d know his son wasn’t cut out for this life. He’d as much as admitted it to Pal the day they’d left.

Pal tried to remember what his room back at the manor had looked like. What color had the blankets been on his bed? Red? Brown? Whatever the color, it had been warm and cozy.

You’re just homesick. You’ll get used to it.

Used to what? All this running and screaming? Sleeping every night with one eye open? Listening to Rajah and Faith arguing? Was it worth it?

But what else are you good for? You’re a squire.

That was right. His job was to be there for others. To keep Rajah going when things got tough, on nights like these. Pal glanced over his shoulder. Rajah gripped Heartbreaker tightly and was turning around in circles, eyes wide with fear and sweat glistening on his forehead.

There was definitely something out there.

He wished they were more like the Bravos. Now, that was a real bunch of heroes! He’d seen them a while back, returning from some quest, laden with gems and treasure, boasting of the mobs they’d defeated. They’d been clad in the best armor, their weapons bright and razor-sharp. The whole realm would be singing their saga soon. Rajah had grumbled, promising he’d bring back twice as much treasure on their next quest, and that had led them here, lost in the heart of a gloomy forest infested with skeletons and . . . something else.

Pal took a double-handed hold on his axe, and the bow creaked as Faith drew the arrow fletching to her cheek.

It was coming closer.

What was it? Not a skeleton, that’s for sure. He could recognize their rattling plod by now. Not zombies, either. That had been an even bigger disaster than the skeletons. They’d been searching an ancient ruin, hoping for some forgotten treasure, but had taken too long. They’d only explored half the site before the sun had set and the darkness had been filled by an eerie groaning. The zombies had come shambling out of the surrounding ruins, woken by the moonlight. They’d been surrounded and it would have been the end for all three of them if not for Faith. She’d found an escape route, climbing up and over the ancient ruins, jumping the perilous gaps between buildings while the zombies gathered below. It had been close.

Faith loosed an arrow into the darkness. There was a fierce, angry hiss and suddenly a massive green horror charged out of the darkness, hissing loudly as Faith shot a second arrow into it.

But Faith had her third arrow already nocked. “We can beat it, Rajah! You have to stay and fight!”

What should he do? The creature was practically upon them. Faith’s arrow flew wide as the creeper leapt over a fallen tree trunk.

He didn’t know! Why had they ever left the manor?

Now, that was bad. Really bad.

“He’s right! Run!” he yelled as he grabbed Faith’s arm, fouling her aim and sending her final arrow arching into the night sky. It didn’t matter; he’d make her more later. She glared at him, but he was already pulling her away frantically.

Rajah was way ahead of them, fleeing deeper into the forest. This was the hero he’d sworn to follow? They’d abandoned all their belongings at the campsite!

Pal glanced back. Maybe it had—

The creeper came apart in the center of their camp, the shock wave obliterating everything, filling the small clearing with a blinding white glare. The power of the explosion tore trees from their roots, threw up a wave of dirt and debris, and lifted them all off their feet. Pal screamed as he lost hold of Faith, turning over and over, everything a blur, and then . . . wham! He hit the ground hard, dirt showered over him, and it all went black.

A lifelong gamer, Sarwat Chadda decided to embrace his passion for over-the-top, wild adventure stories by trading in a stable twenty-year career in engineering for a highly unstable, brand-new one as a writer. That resulted in his first novel, Devil’s Kiss, back in 2009.

Since then he has been published in a dozen languages, writing comic books, TV shows, and novels, such as the award-winning Indian mythology–inspired Ash Mistry series, the epic high fantasy Shadow Magic trilogy (as Joshua Khan), and City of the Plague God for Rick Riordan Presents.

While he’s traveled far and wide in places that include Africa, the Middle East, Europe, Asia, and the Americas, he’s most at home in London, where he lives with his wife, two more-or-less grown-up daughters, and an aloof cat. And, yes, he still runs his Dungeons & Dragons game every Wednesday. 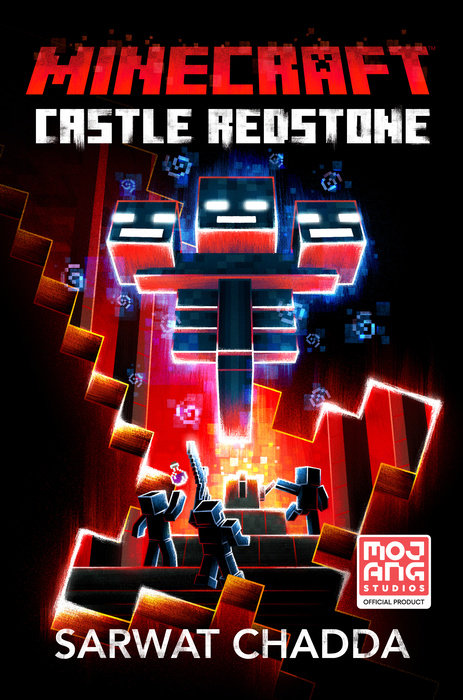