A young Indian woman finds the false rumors that she killed her husband surprisingly useful—until other women in the village start asking for her help getting rid of their own husbands—in this razor-sharp debut.

“Shroff captures the complexity of female friendship with acuity, wit, and a certain kind of magic irreverence. . . . The Bandit Queens is tender, unpredictable, and brimming with laugh-out-loud moments.”—Téa Obreht, New York Times bestselling author of The Tiger’s Wife

Five years ago, Geeta lost her no-good husband. As in, she actually lost him—he walked out on her and she has no idea where he is. But in her remote village in India, rumor has it that Geeta killed him. And it’s a rumor that just won’t die.

It turns out that being known as a “self-made” widow comes with some perks. No one messes with her, harasses her, or tries to control (ahem, marry) her. It’s even been good for business; no one dares to not buy her jewelry.

Freedom must look good on Geeta, because now other women are asking for her “expertise,” making her an unwitting consultant for husband disposal.

And not all of them are asking nicely.

With Geeta’s dangerous reputation becoming a double-edged sword, she has to find a way to protect the life she’s built—but even the best-laid plans of would-be widows tend to go awry. What happens next sets in motion a chain of events that will change everything, not just for Geeta, but for all the women in their village.

Filled with clever criminals, second chances, and wry and witty women, Parini Shroff’s The Bandit Queens is a razor-sharp debut of humor and heart that readers won’t soon forget.

An excerpt from The Bandit Queens

The women were arguing. The loan officer was due to arrive in a few hours, and they were still missing two hundred rupees. Rather, Farah and her two hundred rupees were missing. The other four women of their loan group had convened, as they did every Tuesday, to aggregate their respective funds.

“Where is she?” Geeta asked.

No one answered. Instead, the women pieced their respective Farah sightings into a jigsaw of gossip that, to Geeta’s ears at least, failed to align. Saloni—­a woman whose capacity for food was exceeded only by her capacity for venom—­goaded most of the conversation.

“And you know it won’t be the last,” Saloni finished.

When Preity mentioned she was fairly certain she’d seen Farah buying hashish, Geeta felt it best to nudge them to more prosaic matters. “Varunbhai is not going to like this.”

“Well, now we know where her money’s going,” Priya said.

“Some devout Muslim.” Saloni sniffed, the gesture dainty for a woman of her size. Lately she’d been attempting to rebrand her weight as evidence of her community status. Compounded with her preternatural talent for bullying, this guise worked on the women. But Geeta had known Saloni and her family since childhood—­when she ruled the playground rather than their loan group—­and could accurately attribute her heft to genetics betraying her in her thirtieth year rather than any posh mark of affluence. Ironic, considering Saloni had spent her first nineteen years perpetually malnourished, thin as paper, and just as prone to cut. She’d married well, curving into a stunning woman who’d reclaimed her slim figure after her firstborn, but hadn’t managed the same after the second.

Geeta listened to their rumors, observed how the women contributed and piled on, with clinical interest. This must’ve been the way they’d whispered about her after Ramesh left—­a fallen woman “mixed with dirt”—­then shushing each other when she approached, their lips peeling into sympathetic smiles as sincere as political promises. But now, five years after her husband’s disappearance, Geeta found herself within the fold rather than shunned, thanks to Farah’s absence. It was a dubious honor.

Her fingers toyed with her ear. When she used to wear earrings, she would often check to make sure the backs were secure. The sharp but benign prick of the stud against her thumb had been reassuring. The habit lingered even after Ramesh vanished and she’d stopped wearing jewelry altogether—­no nose ring, no bangles, no earrings.

Tired of the gossip, she interrupted the women’s musings on Farah’s defection: “If each of us puts in another fifty, we can still give Varunbhai the full amount.”

That got their attention. The room quieted. Geeta heard the feeble hum of her fan stirring the air. The flywheel’s tight circles oscillated like a tiny hula hoop. The blades were ornamental; the heat remained thick and unforgiving. The fan hung from a strong cord Ramesh had tied in their old house. It’d been early in their marriage, so when he’d stumbled on the ladder, it had been okay to laugh—­he’d even joined her. Rage hadn’t found Ramesh until their second year together, after her parents passed away. When she’d been forced to move into this smaller home, she’d tied the cord herself.

A lizard darted up the wall in a diagonal before hiding in the lintel’s shadow. Geeta’s mother used to tell her not to be afraid, that they brought good luck. She itched to see it plop from the dark pocket onto one of the women—­preferably Saloni who was terrified of all animals except, inexplicably, spiders. The other two—­sisters Priya and Preity—­were neither kind nor cruel, but they deferred to their leader. Geeta could sympathize, having herself once served under Saloni.

Geeta stared at the dark wall, willing the lizard to be a good sport. Nothing. “It’s our problem,” she snapped. “If we default, Varunbhai won’t give us another loan next year.” The women were somber; everyone knew the center extended loans to groups, not individuals.

Then began a communal metamorphosis from fishwives to martyrs: the women spilled their excuses onto each other, all pushy contestants in a competition with no judge to rule as to who was the most aggrieved party.

“I have to buy my kids’ schoolbooks. They keep getting more expensive.” Saloni’s lips compressed. “But it’s such a gift to be a mother.”

“We just bought another buffalo. My kids guzzle so much milk. I keep telling them ‘if you’re thirsty, drink water!’ ” Preity coughed. “But still, they bring me joy.”

“My boy needs medicine for his ear infection. He cries all the time.” Priya hurried to add, “But there’s no better blessing than a son.”

“Joys of motherhood,” they murmured.

Preity and Priya were twins, formerly identical. The scars across Preity’s face and neck shimmered like heat when she toggled her head in agreement.

“What about you, Geetaben?” Saloni asked. Her upper arms were plump and wide, straining against her sari blouse’s sleeves, but they then abruptly transitioned to the trim elbows and forearms of her youth. The two halves could’ve easily belonged to separate people.

“Well, I don’t have the joys of motherhood,” Geeta said after the women were emptied of excuses. Her voice was patient, but her smile was feral. “But I do have the joys of sleep and money.”

No one laughed. The women looked at the ceiling, the fan, each other, the door, anywhere but at her. Geeta had long ago released the idea that one needed eye contact in order to feel seen. She’d grown accustomed to their discomfort around her; people didn’t like being reminded that what you’d lost, they took for granted—­though Geeta no longer felt like Ramesh had robbed her of anything by leaving. There were times she wanted to tell the women that they could keep their blood-­sucking husbands, that she harbored no envy, coveted no part of their messy, small lives. It was true she no longer had friends, but she did have freedom.

Another lizard skittered along the wall. While Geeta appreciated luck as much as anyone, she had no use for two lizards. It was said that if you happened across two lizards mating, you’d meet an old friend. If you saw them quarreling, you’d pick a fight with a friend instead.

“I’ll pay,” she told the women, as she reached for the grass broom she kept in the corner. “I don’t have children, I don’t have a husband and I don’t have a buffalo.” She tickled the ceiling corner with the jhadu’s stiff bristles. When that failed to cajole the lizards, she thumped the wall twice.

Someone gasped at the loud sound. Priya scooted behind Saloni’s larger frame as though Geeta were a threat. Which many assumed she was: a churel who, depending on the gossiper, gobbled children, rendered women barren or men impotent. That a woman had to have perished in order to return as a churel did little to staunch the village’s rumors.

Saloni blotted her upper lip with the back of her wrist. Fresh sweat bloomed quickly. She glared and Geeta could easily recall her at fourteen—­slender and haughty as she held court, hip jutting against a bicycle while the boys sighed.

The lizard finally dropped from above—­alas, missing Saloni’s disdainful face—­and scrambled for its bearings. With the broom, Geeta slapped the floor, herding it toward the open entrance.

“Right,” Saloni said. “So we agree: Geetaben will cover it. You’ll settle it with Farahben later, correct.” It was not a question.

Given Saloni’s stamp of oppressive approval, the others did not even pretend to mew or protest. Saloni’s social weight was as robust as her physical. Her father-­in-­law was the head of the panchayat, the village council. Five years ago, when the government demanded their village observe the reservation system and elect a woman to fill one of the five council seats, Saloni was the obvious choice. In fact, these pre-­loan meetings were usually conducted at Saloni’s house, but this week Geeta’s empty home had been selected for reasons no one had bothered explaining to her.

The twins stared at Geeta, wary, as though she were the death goddess Kali and her broom a sickle. She knew they were thinking of Ramesh, what had allegedly become of him at her hands. And just like that, she was no longer a part of the pack; they avoided her gaze and her touch as they handed her their money on their way out. Saloni alone met her eyes, and though Geeta recognized the scorn as easily as she would her own face, at least it was some manner of acknowledgment. A response, however negative, to the space Geeta occupied in this world, in their village, in their community.

She slammed the door shut after the three of them. “No, no,” she muttered effusively to no one. “Thank you.”

Parini Shroff received her MFA from the University of Texas at Austin, where she studied under Elizabeth McCracken, Alexander Chee, and Cristina García. She is a practicing attorney and currently lives in the San Francisco Bay Area. The Bandit Queens is her debut novel. 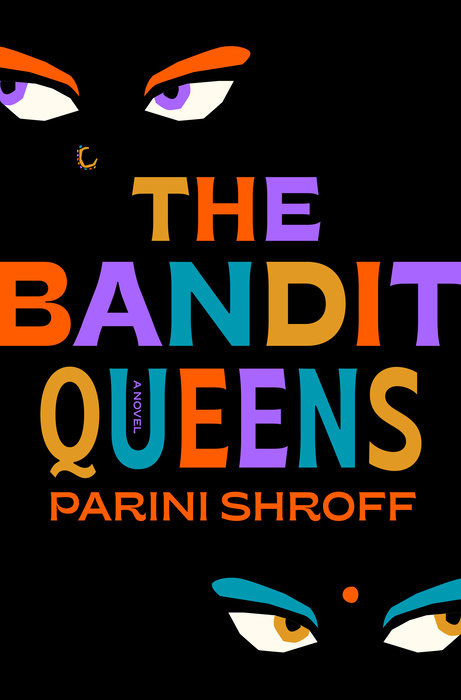