A woman trapped in a loveless engagement joins forces with a mysterious man bent on vengeance against her fiancé in The Proposition, a lively tale of intrigue, revenge, and romance.

What would you propose?

Clemency Fry has always been certain that marriage is a ludicrous arrangement—a notion she has believed ever since reading a scandalous feminist treatise as a girl. But her outlook on romance suddenly changes after meeting the handsome Lord Boyle. With the proposition of a different sort of union, one with mutual respect and financial security for her family, Clemency is won over, but when the wedding is set and the plans are in motion, Lord Boyle turns cold and dismissive. Clemency fears the worst has come to fruition; she had been right all along about affairs of the heart. She has fallen into the one trap she swore she never would.

Then Audric Ferrand comes to town seeking revenge against Lord Boyle on behalf of his sister, who also fell for his charm and wealth. Audric sees Clemency’s predicament as the opportunity he needs. He suggests they join forces, a proposition that is risky and outrageous, and could possibly lead to the destruction of both their reputations. Falling in love was never in the bargain, but the season has just begun—and romance is surely in the air.

An excerpt from The Proposition

The small and saintly quiet town of Round Orchard was never known for anything. Absolutely, it held the expected Sussex charm and the expected hedges and gardens, the expected paved town square decorated with the expected bunting and wreaths, but it was otherwise unremarkable in every way. That is, but for its one hidden claim to fame, which was known only to a few residents, and most of those would categorize this “claim” to be something less than attractive. In fact, it was now a closely guarded secret, like a bit of shameful tat kept in the lowest drawer under the heaviest blankets, a pet nobody loved buried in the backyard in an unmarked and shallow grave.

All but one inhabitant of Round Orchard wished to hastily sweep this secret under the rug. Only young Clemency Fry remained the keeper of this tiny, hidden flame—­the flame in question was a Miss Bethany Taylor, a woman of middling family and middlinger prospects. Some described her as “severe” and “a scold” while other more charitable Round Orchardians allowed that she had an intense sort of beauty that only specific and brave men coveted. This Miss Bethany Taylor produced and published a treatise against marriage, aimed at convincing other members of her sex that the institution was both humiliating and cruel. To participate in matrimony, wrote the severe scold of intense beauty Miss Taylor, is to abdicate one’s duty to the dignified state of solitude. Upon completion of the contract, a woman becomes property owned by man, surrendering all autonomy and power, diminishing herself in every conceivable way. Solitude is subsequently diminished also, as the state of contented aloneness cannot be improved upon—­even a love match requires some degree of compromise. Thus, with society thrusting women into a state of compromise, only a single lady happy in her charms, her accomplishments, and the quality of her morals achieves a truly enviable state of being.

Marriage was, in Miss Taylor’s controversial and embarrassing opinion, a swindle: To marry was to give one’s self up; this could not be argued with. Nobody agreed with her except of course the keeper of her flame and one devoted reader, Clemency Fry. Clemency did not style herself a his­torian, but she did obsess over Miss Taylor’s work and felt nothing but conviction when it came to preserving the heart of the late Miss Taylor’s writings.

In the year 1801, the men of Round Orchard and surrounding towns were outraged and began an effort to quash all access to Miss Taylor’s work. Many fires were lit and many pages burned. The vicar at the time offered his restrained critique of the treatise, calling it, “A disgrace, an abomination before God, and an affront to the understood and natural order of things.” Some overheard him saying it made a case for “bringing back the stake,” though these remained unconfirmed rumors. A local man, urgently asked for comment, reportedly told a room full of good society that, “Miss Taylor, like all unmarriagable women, turns her pen against men rather than confront her own deficiencies.” The tirade continued for some time. “A real shrew,” the man concluded.

Scant copies of On Marriage, by Miss Bethany Taylor, remained after the predictable outcry and response. Word of its existence scarcely reached beyond the county. But as mentioned, one young lady, brought up in the small and saintly quiet town of Round Orchard, found a moldering copy of On Marriage in the woodshed one day. She was then eleven, and the papers had been stuffed into a suspected vermin nest. Despite their poor condition, Clemency Fry took the papers, dried them, smoothed them, and like a diligent restorer of ancient artifacts (but only just like one, for after all she was only eleven), painstakingly scraped away the mouse droppings and dirt until a somewhat legible and faintly stinking copy of On Marriage existed.

It was, as one might imagine, a formative experience for small Clemency Fry. Those redolent, faded pages were perhaps the last copy of On Marriage in the whole world, and they belonged to her, and she protected them, the solemn guardian of this most hated work.

So too did the reading of this treatise prove momentous for young Clemency.

Was it not so that marriage was unfair to women? Were the laws of property, of patrilineality, not by definition unjust? What, young Miss Fry longed to cry to the heavens, about women? Eventually it came to her mother’s attention that little Clemency was in possession of what was meant to be mere kindling, words that had become a very different sort of kindling. A young mind once ignited is difficult to snuff out, but Mrs. Fry gave it her best attempt. A fearful and exasperated Mrs. Fry repeatedly threatened to confiscate what was “essentially poison” but she, seeing how dearly her daughter loved the dropping-­stained relic, never had the heart to follow through on her threats. Still, she hoisted that same cudgel whenever Clemency acted out (which was frequently) and won a few battles, but by the time her daughter had become a young lady, Mrs. Fry had utterly lost the war. Reading Bethany Taylor led Clemency to an appreciation and study of Olympe de Gouges, and Mary Wollstonecraft, and so on, until Round Orchard secretly harbored another harbinger of rights for the fairer sex. Quelle horreur.

Mrs. Fry begged her daughter not to take after women who were “shrill and intolerable, scary, and probably up to a not insignificant amount of witchcraft.” After such strong language, a more obedient child might have been warned off the material, and frightened, but then, Clemency had never been an obedient girl, nor a cowardly one.

She grew up to be an even less obedient woman.

Clemency Fry stared at the man who would be her husband while her flesh, her heart, her very soul turned as cold as the chilled salmon gelée jiggling on her plate. Whenever she glanced at him, at Turner Boyle, a flash of love passed before her eyes like a strike of lightning. His face, handsome in a fragile and cherubic way, elicited a momentary blast of warmth before the chill inevitably came on.

For in recent memory she had loved him, and, she felt reasonably certain, he had loved her. She had loved him somewhat against her will, her suspicion of marriage ever bolstered by the philosophy and feelings of Miss Bethany Taylor, her idol. Those words had formed a sort of protective armoring over Clemency’s heart, a padded gambeson of sense and control only lately pierced by the arrow of Lord Boyle’s affection. But now that affection was gone, and the arrow wound felt less like a wound of love and more like an infection that had begun to fester. None of that affection remained, not even a smear like the one on Lord Boyle’s plate, where his salmon had been.

“Excellent as always,” Boyle crowed. He had a raucous pile of gingery hair that seemed always to style itself roguishly and fell in different attractive configurations whenever he ran his hand through it. It was a nervous tic of his, a tell, and he did it just then, as he no doubt felt Clemency’s eyes boring into the side of his cheek.

If Miss Bethany Taylor were there to see her in that moment, she would have withered and died all over again of embarrassment.

I am so sorry I did not listen, Miss Taylor. You were right all along.

After exchanging a dozen or so words at a party and six letters, Lord Boyle pronounced them friends, adding that, “Friendship is a serious affliction; the most sublime of all afflictions, because it is founded on principle, and cemented by time.” She had been so impressed by his attempt to echo Mary Wollstonecraft that she had initially neglected to notice the error in the quotation. (Affection, not affliction. Obviously.) This failure she realized by and by was rather an epidemic of wishful thinking on her part vis-­à-­vis Lord Boyle. At any time, Miss Taylor’s ghost would stir from the loose earth of a Round Orchard graveyard and come to haunt her, and Clemency was convinced she would deserve it.

Madeleine Roux is the New York Times and USA Today bestselling author of the Asylum series, which has sold over a million copies worldwide. She is also the author of the House of Furies series and several titles for adults, including Salvaged and Reclaimed. She has made contributions to Star Wars, World of Warcraft, and Dungeons & Dragons. Madeleine lives in Seattle, Washington, with her partner and beloved pups. 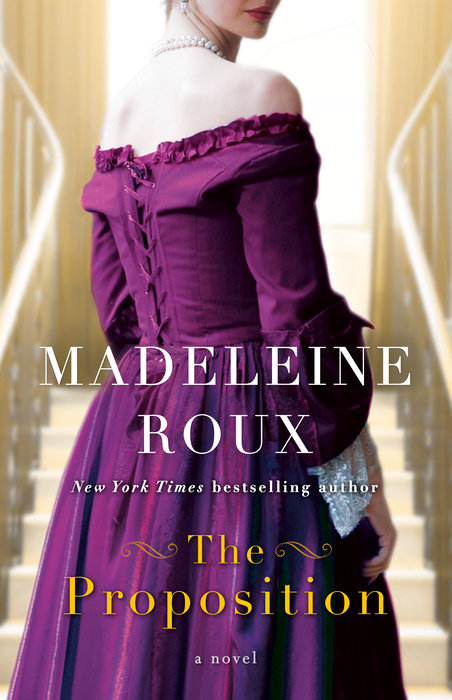