Warfighting is an authentic  American philosophy of action that will thrill the  millions of fans of SunTzu's The Art of  War and Musashi's T he Book of  Five Rings. This modern classic of  strategy and philosophy is the quintessential guide to  prevailing in competitive situations, be it war,  work, play, or daily  living.

Sometimes life is war and sometimes business  is war and sometimes you need to call in the  Marines. Over the past two hundred years, the Marines  have developed a reputation for getting the job  done-fearlessly, boldly, and taking no prisoners.  What better role model for the hidden warriors in  ourselves? What better advice to call on when the  stakes are high and sensitivity just isn't going  to work? Written in 1989 as a philosophical and  strategic guide-book for the US. Marine Corps,  Warfighting is a worthy successor  to SunTzu's The Art Of War.  With clarity, brevity, and wisdom, it describes the  basic forces at work in every competitive situation  whether on the field of battle, in the boardroom,  or in the courtroom. With twentieth-century  technology and its emphasis on speed and versatility,  the rules of war and competition have changed.  Warfighting's exploration of  maneuver warfare takes readers beyond Sun Tzu's classic  lessons and provides them a more thorough  understanding of what it takes to fight and win in the  modern world. Currency's edition of  Warfighting features interviews with famous  former Marines including F. Lee Bailey, Ed McMahon,  and Donald Regan. They tell how they have used the  Marine Corps' battle strategies of strength and  straightforwardness as their secret weapons in every  confrontation, whether at a corporate,  departmental. or personal level.

An excerpt from Warfighting

This little army manual has served the Marines through many confrontations.  In a period when wars are no longer fought on the battlefield but in intimate relationships of boss to worker or spouse to spouse, the tenets of war strategy apply because the social heat and hostility that usually gets played out in warfare is rerouted in social relationships.  Marine your way through these everyday conflicts.

Regardless of its type and nature or the level at which it is fought, combat manifests itself in two different but complementary forms:  the offense and the defense.  The offense and defense are neither mutually exclusive nor clearly distinct; as we will see, each includes elements of the other.

The defense is inherently the stronger form of combat.  Were this not the case, there would be no reason ever to assume the defensive.  The offense, with its positive aim, would always be preferable.  But in fact, if we are weaker than our enemy, we assume the defensive to compensate for our weakness.  Similarly, if we are to mount an offensive to impose our will, we must develop enough force to overcome the inherent superiority of the enemy's defense.

At least one party to a conflict must have an offensive intention, for without the desire to impose upon the other, there would be no conflict.  Similarly, the second party must at least possess a defensive desire, for without the willingness to resist, there again would be no conflict.  We can imagine a conflict in which both parties possess an offensive intention.  But after the initial clash, one of them must assume a defensive posture out of weakness until able to resume the offensive.

This leads us to the conclusion that while the defense is the stronger form of combat, the offense is the preferred form, for only through the offense can we truly pursue a positive aim.  We resort to the defensive when weakness compels.

While  opposing forms, the offense and defense are not mutually exclusive.  In fact, they cannot exist separately.  For example, the defense cannot be purely passive resistance.  An effective defense must assume an offensive character, striking at the enemy at the moment of his greatest vulnerability.  It is "not a simple shield, but a shield made up of well-directed blows."  The truly decisive element of the defense is the counterattack.  Thus, the offense is an integral component of the concept of the defense.

Similarly, the defense is an essential component of the offense.  The offense cannot sustain itself indefinitely.  At some times and places it becomes necessary to halt the offense to replenish, and the defense automatically takes over.  Furthermore, the requirement to concentrate forces at the focus of effort for the offense often necessitates assuming the defensive elsewhere. Therefore, out of necessity we must include defensive considerations as part of our concept of the offense.

This brings us to the concept of the culminating point, without which our understanding of the relationship between the offense and defense would be incomplete.  Not only can the offense not sustain itself indefinitely, it generally grows weaker as it advances.  Certain moral factors, such as morale or boldness, may increase with a successful attack, but these generally cannot compensate for the physical losses involved in sustaining an advance in the face of resistance.  We advance at a cost-- lives, fuel, ammunition, physical and sometimes moral strength-- and so the attack becomes weaker over time. Eventually, the superiority that allowed us to attack and forced our enemy to defend in the first place dissipates and the balance tips in favor of our enemy.  We have reached the culminating point, at which we can no longer sustain the attack and must revert to the defense.  It is precisely at this point that the defensive element of the offense is most vulnerable to the offensive element of the defense, the counterattack.

This relationship between offense and defense exists simultaneously at the various levels of war.  For example, we may employ a tactical defense as part of an offensive campaign, availing ourselves of the advantages of the defense tactically while pursuing an operational offensive aim.

We conclude that there exists no clear division between the offense and defense.  Our theory of war should not attempt to impose one artificially.  The offense and defense exist simultaneously as necessary components of each other, and the transition from one to the other is fluid and continuous.

In 1989 US Marine Corps Commandant General A. M. Gray distributed a remarkable 77-page document to every officer in the Corps. Authentically written and brilliantly articulate, Warfighting, the official doctrine of the US Marine Corps, calls to mind other classics of strategy such as Sun Tzu’s The Art of War, Carl von Clausewitz’s On War, and Miyamoto Musashi’s The Book of Five Rings. In 1991, he retired from the Corps after 41 years of service. 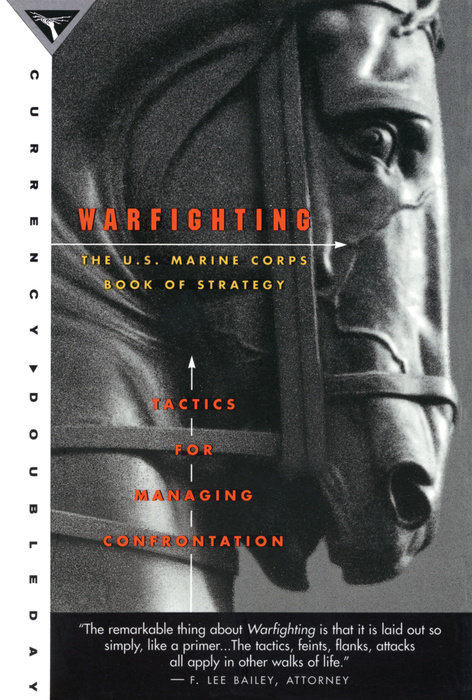