Why It Matters & Why You Should Care

What exactly is critical race theory? This concise and accessible exploration demystifies a crucial framework for understanding and fighting racial injustice in the United States.

From renowned scholar Dr. Victor Ray, On Critical Race Theory explains the centrality of race in American history and politics, and how the often mischaracterized intellectual movement became a political necessity.

Ray draws upon the radical thinking of giants such as Ida B. Wells, W.E.B. Du Bois, and Dr. Martin Luther King, Jr., to clearly trace the foundations of critical race theory in the Black intellectual traditions of emancipation and the civil rights movement. From these foundations, Ray explores the many facets of our society that critical race theory interrogates, from deeply embedded structural racism to the historical connection between whiteness and property, ownership, and more.

In succinct, thoughtful essays, Ray presents, analyzes, and breaks down the scholarship and concepts that constitute this often misconstrued term. He explores how the conversation on critical race theory has expanded into the contemporary popular conscience, showing why critical race theory matters and why we should all care.

An excerpt from On Critical Race Theory

The law, in its majestic equality, forbids rich and poor alike to sleep under bridges, to beg in the streets, and to steal their bread. —Anatole France


What is Critical Race Theory?

“Not everything that is faced can be changed; but nothing can be changed until it is faced.”2 James Baldwin wrote those words to convey the intellectual’s role in laying bare a nation’s faults. Critical race theory is a body of scholarship that faces America’s brutal racial history, recognizes the parts of that history that remain unchanged, and works toward changing the rest.

Racism is America’s central political fault line. Critical race theory shows how this fault line runs through the American legal system. Critical race theory developed, in part, to explain why the monumental legal victories of the civil rights movement—for instance, the Brown v. Board of Education decision outlawing state-sponsored school segregation—didn’t always lead to lasting improvements in the lives of people of color in the United States. By the late seventies and early eighties it was clear that a backlash to the civil rights movement was gaining traction. Several trends supported this conclusion. Schools that had been forced to open their doors to Black students in the wake of the Brown ruling were resegregating. This resegregation continues, with some public schools now equally or more segregated than before Brown. The best evidence shows that discrimination against Black men in entry-level jobs hasn’t decreased since the late 1980s, and emerging businesses are increasingly segregated. The impact of antidiscrimination law in the workplace is also waning (or reversing) as occupational desegregation stalled in the 1980s. Conservative think tanks waged an all-out war on affirmative action in higher education, characterizing policies designed to (slightly) intervene in decades of explicit exclusion from white colleges as reverse racism. It might be tempting to diagnose policies like affirmative action and school desegregation as failures because racial equality is still elusive in schools and workplaces. But these policies successfully opened educational opportunities and jobs that were formerly closed to most Black Americans. Policies designed to create racial equality weren’t targeted by white hostility because they didn’t work. They were targeted because they did.

Hoping to explain the backlash to the civil rights victories, a group of law students and legal scholars—including Kimberlé Crenshaw, Richard Delgado, Mari Matsuda, Patricia Williams, Kendall Thomas, Phillip T. Nash, and Neil Gotanda, among others—turned to the writings of Derrick Bell, a gifted lawyer who worked on landmark civil rights cases and wrote a pathbreaking casebook on race and the law. Bell was the first tenured Black professor at Harvard Law School, but his considerable personal achievements never clouded his vision of collective struggle as the terrain on which individual plaudits are built. After years of protesting over Harvard Law’s refusal to hire more faculty of color, Bell left, and “the School suffered a 100% reduction in its tenured minority faculty.” Despite Bell’s monumental contributions to the larger civil rights struggle, stagnating and reversing racial progress led him to question the ultimate efficacy of the movement’s legal strategy. Bell worried that his work was contributing to what the historian Jelani Cobb called “a more durable system of segregation,” as new forms of seemingly race-neutral exclusion emerged to undermine civil rights gains.

Bell began to critique the intellectual underpinnings of the civil rights movement he contributed to, arguing that structural racism was malleable, intractable, and a constitutive feature of American law. Drawing on Bell’s work, and in reaction to the critical legal studies movement, these burgeoning critical race theorists critiqued existing explanations of the relationship between race and the law as inadequate to understand racial backlash and enduring racial inequality. Critical legal scholars argued that, despite its neutral pretensions, the law was a tool of the economically powerful. But critical legal scholars largely ignored how race shaped legal precedent. Critical race theorists extended this critique, showing how the law often forwarded white prerogatives. After all, members of the judiciary claimed that the law remained racially neutral while deciding what fraction of blood made one white or Black or Indian. The judiciary claimed no bias while divvying up ballot access, the rights protected by suffrage, or access to citizenship. The judiciary claimed impartiality while allowing neighborhoods and cities to segregate schools and hoard resources. And courts claimed to fairly decide what evidence juries could see in discrimination cases where employees were called by racial slurs, or co-workers hung nooses on colleagues’ desks. Rather than seeing the law as separate from racial power—a neutral arbiter or umpire just calling balls and strikes—these critical race theorists understood the law as a tool that occasionally empowered people of color but usually advanced whites’ racial interests.

Since critical race theory’s genesis as an insurgent intellectual movement in the late 1970s, the framework has spread beyond legal scholarship to parts of the social sciences and humanities. Although the theory developed as a critique of the veneer of race neutrality in the law, critical race legal theorists developed a broad framework for thinking about race. This framework includes foundational social science concepts—that race is a social construction, racism is primarily structural, social life is made up of intersecting identities. They also developed techniques that remain more contested, such as critical race theorists’ use of narratives and parables to explain the impact of racial inequality. Critical race theory builds upon ideas that were central to and often developed by Black activist scholars— borrowing and formalizing these concepts into general descriptions that were easy to apply to related fields. Many of the intellectual precursors of critical race theory also shaped related intellectual traditions. For instance, W.E.B. Du Bois, the towering intellectual and first Black Harvard PhD, is a foundational figure in the disciplines of African American studies, sociology, and history. Race shapes social life, so it makes sense that social science and humanities disciplines share basic assumptions about the impact of race and racism. Kimberlé Crenshaw, who has been credited with coining the term “critical race theory,” claims the framework is a “verb” because it is a broadly adaptable attempt to explain how racism is produced and maintained.

Critics have treated this intellectual cross-fertilization as evidence of a nefarious attempt to take over classrooms. These critics misunderstand how academic exchange works, with ideas regularly crossing porous disciplinary boundaries. Many of the ideas attributed to critical race theory are in fact just plain honesty about America’s long-standing structural racism. Historians who study urban development and sociologists who study contemporary patterns of segregation may both conclude that racism is a structural feature of cities manifested in unequal work locations, access to housing, or commute times, and even in where environmental toxins are most likely to show up. These scholars reach these conclusions not because they are critical race theorists but because a dispassionate examination of the evidence makes such conclusions hard to ignore.

Victor Ray was born in Pittsburgh and raised in western Pennsylvania. After receiving his bachelor of arts in urban studies at Vassar, he earned his PhD from Duke University in 2014. His work has been published in a number of peer-reviewed journals, including American Sociological Review and The Annals of the American Academy of Political and Social Science. Dr. Ray is a nonresident senior fellow at the Brookings Institution and his research has been funded by the Ford Foundation. As an active public scholar, his social and critical commentary has appeared in outlets such as The Washington Post, Newsweek, Harvard Business Review, and Boston Review. Victor Ray currently resides in Iowa City.

Why It Matters & Why You Should Care 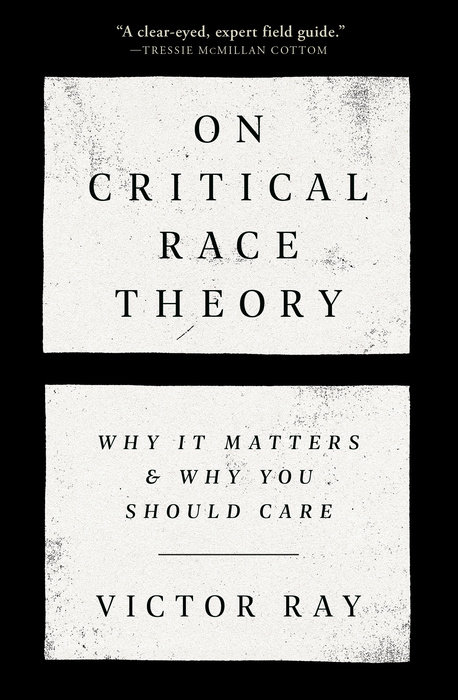