LONGLISTED FOR THE BOOKER PRIZE • A “beautifully and sparingly constructed” (The New York Times) novel about a lighthouse keeper with a mysterious past, and the stranger who washes up on his shores—An Island is the American debut of a major voice in world literature.

“An Island by Karen Jennings is quite simply a revelation—a ferocious, swift chess game of a novel.”—Paul Yoon, author of Run Me to Earth

Samuel has lived alone on an island off the coast of an unnamed African country for more than two decades. He tends to his garden, his lighthouse, and his chickens, content with a solitary life. Routinely, the nameless bodies of refugees wash ashore, but Samuel—who understands that the government only values certain lives, certain deaths—always buries them himself.

One day, though, he finds that one of these bodies is still breathing. As he nurses the stranger back to life, Samuel—feeling strangely threatened—is soon swept up in memories of his former life as a political prisoner on the mainland. This was a life that saw his country exploited under colonial rule, followed by a period of revolution and a brief, hard-won independence—only for the cycle of suffering to continue under a cruel dictator. And he can’t help but recall his own shameful role in that history. In this stranger’s presence, he begins to consider, as he did in his youth: What does it mean to own land, or to belong to it? And what does it cost to have, and lose, a home?

A timeless and gripping portrait of regret, terror, and the extraordinary stakes of companionship, An Island is a story as page-turning as it is profound.

An excerpt from An Island

It was the first time that an oil drum had washed up on the scattered pebbles of the island shore. Other items had arrived over the years—ragged shirts, bits of rope, cracked lids from plastic lunch boxes, braids of synthetic material made to resemble hair. There had been bodies, too, as there was today. The length of it stretched out beside the drum, one hand reaching forward as though to indicate that they had made the journey together and did not now wish to be parted.

Samuel saw the drum first, through one of the small windows as he made his way down the inside of the lighthouse tower that morning. He had to walk with care. The stone steps were ancient, worn smooth, their valleyed centers ready to trip him up. He had inserted metal handholds into those places where the cement had allowed, but the rest of the descent was done with arms outstretched, fingers brushing the rough sides in support.

The drum was plastic, the blue of workers’ overalls, and remained in sight, bobbing in the flow, during his hastening to the shore. The body he saw only once he arrived. He sidestepped it, walking a tight circle around the drum. It was fat as a president, without any visible cracks or punctures.

He lifted it carefully. It was empty; the seal had held. Yet despite being light, the thing was unwieldy. It would not be possible with his gnarled hands to grip that smooth surface and carry it across the jagged pebbles, over the boulders, and then up along the sandy track, through scrub and grasses, to the headland where the cottage sat alongside the tower. Perhaps if he fetched a rope and tied the drum to his back, he could avoid using the ancient wooden barrow with its wheel that splintered and caught on the craggy beach, often overturning as a result of its own weight.

Yes, carrying the drum on his back would be the best option. Afterward, in the yard, he would hunt out the old hacksaw that lived among sacking and rotting planks. He would rub the rust from the blade, sharpen it as best he could, and saw the top off the drum, then place it in an outside corner of the cottage where the guttering overflowed, so that it could catch rainwater for use in his vegetable garden.

Samuel let the drum fall. It lurched on the uneven surface, thudding against the arm of the corpse. He had forgotten about that. He sighed. All day it would take him to dispose of the body. All day. First moving it, then the burial, which was impossible anyway on the rocky island with its thin layer of sand. The only option was to cover it with stones, as he had done with others in the past. Yet it was such a large body. Not in breadth, but in its length. Twice as long as the drum, as though the swell and ebb of the sea had mangled it into this unnatural, elongated form.

The arms were strong, disproportionate to the naked torso’s knuckled spine and sharp ribs. Small, fine black curls formed patches on each shoulder blade, and more colored the base of the back where it met his gray denim shorts. The same curls, small, too small for a man of his size, grew on his legs and toes, across his forearms and between the joins of his fingers. They unsettled Samuel. They were the hairs of a newborn animal or of a baby who had stayed too long in the womb. What had the sea birthed here on these stones?

Already, as the midmorning sun was rising, the curls were silvering with salt crystals. His hair, too, was gray where sand had settled in it. Grains adhered to the only portion of the man’s face that was visible—part of his forehead, a closed eye. The rest of the face was pressed into his shoulder.

Samuel tutted. That would have to wait. First he would tend to the drum, then next morning, if the body hadn’t drifted back into the sea, he would have to break some of the island’s rocks, creating enough pieces to cover it.

There had been thirty-two of these washed-up corpses during the twenty-three years that he had been lighthouse keeper. All thirty-two nameless, unclaimed. In the beginning, when the government was new, crisp with promises, when all was still chaos, and the dead and missing of a quarter of a century under dictatorial rule were being sought, Samuel had reported the bodies. The first time officials had come out, with clipboards and a dozen body bags, combing the island for shallow graves, for remains lodged between boulders, for bones and teeth that had become part of the gravelly sand.

“You understand,” the woman in charge had said, as she looked down at a scuff mark on her patent-leather heels, “we have made promises. We must find all those who suffered under the Dictator so that we can move forward, nationally. In a field outside the capital, my colleagues found a grave of at least fifty bodies. Another colleague discovered the remains of seven people who had been hanged from trees in the forest. They were still hanging, you understand, all this time later. Who knows how many we will find here? I am certain it will be many. This is an ideal dumping ground.”

“Oh yes, just look around.” She waved at the view. “No one for miles. No one to see or hear or do anything at all.” She leaned closer, lowered her voice. “They say there’s been some talk that he had secret camps, like concentration camps, where he sent dissenters to die. Of course, we don’t know yet if it is absolutely true. We haven’t found evidence of that, but this could well have been such a place, don’t you think? Isn’t this a place where you would send someone to die?”

Samuel did not reply, and the woman had already turned from him, was calling to a member of her team, tapping her watch. “Keep looking,” she said after the man had shaken his head. She faced Samuel again and said, “Once we’ve found the bodies, that’s the time when the healing will begin, for the nation, for us all. We can’t heal until then. We need the bodies.”

When the crew returned one by one, empty-handed, with only the washed-up corpse to show for a day’s work, she rushed to the boat, her departure abrupt, without the courtesy of a goodbye. Samuel did not hear from her, nor from her department. He did not know what happened to the dead man, or who he might have been.

Months later, perhaps a year, he found three small bodies washed up side by side. A young boy, a girl, a baby in a blanket. In those days, the lighthouse’s radio still worked and he’d contacted the shore to report. The woman called him back, her voice clipped by the static.

“What color are they?”

“What color are they? The bodies. What color?”

“And their faces? Are they longer? What are their cheekbones like?”

“I don’t know. They’re children. They look like children.”

“Listen, we’re busy people. We have real crimes to deal with. Actual atrocities, you understand. We cannot come out to the island every time another country’s refugees flee and drown. It’s not our problem.”

“What must I do with them then?”

By then he had already started his vegetable garden beside the cottage, had used his wages to import soil from the mainland, had ordered seeds and clippings. And to protect all of that new growth, he had begun to fashion a dry-stone wall around it. He gathered all the brick-sized stones of the island, fitting them together one on top of the other, until they were high enough, stretched far enough to form a barrier. After that he ordered a sledgehammer and broke apart the many rocks and boulders that composed the coastline, using the rubble in his construction. Slowly the island began to change shape. Had a helicopter been in the habit of flying over, its pilot would note the widening of the small bays, the curves where serrated edges had once been.

Samuel continued with the wall along the perimeter of the island until everything was encircled. It was into this outer wall that he began to introduce the bodies. Most times before burying them, Samuel went through their pockets for objects of identification, but there had never been anything of significance. Not beyond an old man’s fist, lumpen with a wad of foreign money squeezed to pulp in his grip. Samuel had buried him with it. He selected spots for the corpses in those sections of the wall that were farthest from the cottage, where the smell of their decay would not reach him. Still, they attracted gulls that for weeks hovered and cawed around the wall, trying to peck their way in. With time he learned to make these parts sturdier, so that they bulged a little around their contents. Even so, sometimes the gulls managed to break through and pick at the body inside. In those places where corpses were left to disintegrate unaided, the stones often collapsed.

Samuel half nudged, half kicked the body where it lay beside the drum. The impact caused the arm to shift, the head to roll from its position and reveal the face. Both eyes opened briefly. The throat growled and fingers on the extended hand twitched, tapping a pebble beneath them.

Karen Jennings is a South African writer based in Cape Town. She works in the History Department at the University of Stellenbosch, and particularly on the “Biography of an Uncharted People” project. An Island is her American debut. 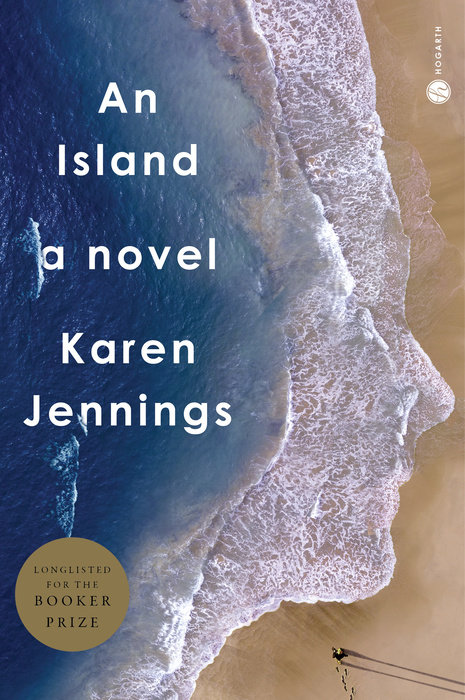