Book One of the Emily Wilde Series

NATIONAL BESTSELLER • A curmudgeonly professor journeys to a small town in the far north to study faerie folklore and discovers dark fae magic, friendship, and love in the start of a heartwarming and enchanting new fantasy series.

“So endlessly enchanting, so rich and complete and wise that you’ll walk away half ensorcelled.”—Melissa Albert, author of The Hazel Wood

Cambridge professor Emily Wilde is good at many things: She is the foremost expert on the study of faeries. She is a genius scholar and a meticulous researcher who is writing the world’s first encyclopaedia of faerie lore. But Emily Wilde is not good at people. She could never make small talk at a party—or even get invited to one. And she prefers the company of her books, her dog, Shadow, and the Fair Folk to other people.

So when she arrives in the hardscrabble village of Hrafnsvik, Emily has no intention of befriending the gruff townsfolk. Nor does she care to spend time with another new arrival: her dashing and insufferably handsome academic rival Wendell Bambleby, who manages to charm the townsfolk, muddle Emily’s research, and utterly confound and frustrate her.

But as Emily gets closer and closer to uncovering the secrets of the Hidden Ones—the most elusive of all faeries—lurking in the shadowy forest outside the town, she also finds herself on the trail of another mystery: Who is Wendell Bambleby, and what does he really want? To find the answer, she’ll have to unlock the greatest mystery of all—her own heart.

An excerpt from Emily Wilde's Encyclopaedia of Faeries

Shadow is not at all happy with me. He lies by the fire while the chill wind rattles the door, tail inert, staring out from beneath that shaggy forelock of his with the sort of accusatory resignation peculiar to dogs, as if to say: Of all the stupid adventures you’ve dragged me on, this will surely be the death of us. I fear I have to agree, though this makes me no less eager to begin my research.

Herein I intend to provide an honest account of my day-­to-­day activities in the field as I document an enigmatic species of faerie called “Hidden Ones.” This journal serves two purposes: to aid my recollection when it comes time to formally compile my field notes, and to provide a record for those scholars who come after me should I be captured by the Folk. Verba volant, scripta manent. As with previous journals, I will presume a basic understanding of dryadology in the reader, though I will gloss certain references that may be unfamiliar to those new to the field.

I have not had reason to visit Ljos­land before, and would be lying if I said my first sighting this morning didn’t temper my enthusiasm. The journey takes five days from London, and the only vessel to get you there is a weekly freighter carrying a great variety of goods and a much smaller variety of passengers. We ventured steadily north, dodging icebergs, whilst I paced the deck to keep my seasickness at bay. I was among the first to sight the snowbound mountains rising out of the sea, the little red-­roofed village of Hrafns­vik huddled below them like Red Riding Hood as the wolf loomed behind her.

We inched carefully up to the dock, striking it hard once, for the grey waves were fierce. The gangway was lowered by means of a winch operated by an old man with a cigarette clamped nonchalantly between his teeth—­how he kept it lit in that wind was a feat so impressive that hours later I found myself thinking back to the glowing ember darting through the sea spray.

I came to the realization that I was the only one disembarking. The captain set my trunk down upon the frosty dock with a thunk, giving me his usual bemused smile, as if I were a joke he only half understood. My fellow passengers, it seemed, few that there were, were headed for the only city in Ljos­land—­Loabær, the ship’s next port of call. I would not be visiting Loabær, for one does not find the Folk in cities, but in the remote, forgotten corners of the world.

I could see the cottage I had rented from the harbour, which astonished me. The farmer who owned the land, one Kryst­jan Egilson, had described it to me in our correspondence—­a little stone thing with a roof of vivid green turf just outside the village, perched upon the slope of the mountain near the edge of the forest of Karr­ðarskogur. It was such stark country—­every detail, from the jumble of brightly painted cottages to the vivid greenery of the coast to the glaciers lurking on the peaks, was so sharp and solitary, like embroidered threads, that I suspect I could have counted the ravens in their mountain burrows.

The sailors gave Shadow a wide berth as we made our way up the dock. The old boarhound is blind in one eye and lacks the energy for any exercise beyond an ambling walk, let alone tearing out the throats of ill-­mannered sailors, but his appearance belies him; he is an enormous creature, black as pitch with bearish paws and very white teeth. Perhaps I should have left him in the care of my brother back in London, but I could not bear to, particularly as he is given to fits of despondency when I am away.

I managed to drag my trunk up the dock and through the village—­few were about, being most likely in their fields or fishing boats, but those few stared at me as only rural villagers at the edge of the known world can stare at a stranger. None of my admirers offered help. Shadow, padding along at my side, glanced at them with mild interest, and only then did they look away.

I have seen communities far more rustic than Hrafns­vik, for my career has taken me across Europe and Russia, to villages large and small and wilderness fair and foul. I am used to humble accommodations and humble folk—­I once slept in a farmer’s cheese shed in Andalusia—­but I have never been this far north. The wind had tasted snow, and recently; it pulled at my scarf and cloak. It took some time to haul my trunk up the road, but I am nothing if not persevering.

The landscape surrounding the village was given over to fields. These were not the tidy hillsides I was used to, but riddled with lumps, volcanic rock in haphazard garments of moss. And if that wasn’t enough to disorient the eye, the sea kept sending waves of mist over the coastland.

I reached the edge of the village and found the little footpath up to the cottage—­the terrain was so steep that the path was a series of switchbacks. The cottage itself rested precariously upon a little alcove in the mountainside. It was only about ten minutes beyond the village, but that was ten minutes of sweaty inclines, and I was panting by the time I reached the door. It was not only unlocked, but contained no lock at all, and when I pushed it open, I found a sheep.

It stared at me a moment, chewing at something, then sauntered off to rejoin its fellows as I politely held the door. Shadow gave a huff but was otherwise unmoved—­he’s seen plenty of sheep in our rambles in the countryside around Cambridge, and looks upon them with the gentlemanly disinterest of an aging dog.

Somehow the place felt even colder than the outdoors. It was as simple as I had imagined, with walls of hearteningly solid stone and the smell of something I guessed to be puffin dung, though it could also have been the sheep. A table and chairs, dusty, a little kitchen at the back with a number of pots dangling from the wall, very dusty. By the hearth with its woodstove was an ancient armchair that smelled of must.

I was shivering, in spite of the uphill trunk-­dragging, and I realized I had neither wood nor matches to warm that dingy place, and perhaps more alarmingly, that I might not know how to light a fire if I did—­I had never done so before. Unfortunately, I happened to glance out the window at that moment and found that it had begun to snow.

It was then, as I stared at the empty hearth, hungry and cold, that I began to wonder if I would die here.

Lest you think me a newcomer to foreign fieldwork, let me assure you this is not the case. I spent a period of months in a part of Provence so rural that the villagers had never seen a camera, studying a river-­dwelling species of Folk, les lutins des rivières. And before that there was a lengthy sojourn in the forests of the Apennines with some deer-­faced fate and half a year in the Croatian wilderness as an assistant to a professor who spent his career analysing the music of mountain Folk. But in each case, I had known what I was getting into, and had a student or two to take care of logistics.

And there had been no snow.

Ljos­land is the most isolated of the Scandinavian countries, an island situated in the wild seas off the Norwegian mainland, its northern coastline brushing the Arctic Circle. I had accounted for the awkwardness of reaching such a place—­the long and uncomfortable voyage north—­yet I was realizing that I had given little consideration to the difficulties I might face in leaving it if something went wrong, particularly once the sea ice closed in.

A knock upon the door launched me to my feet. But the visitor was already entering without bothering about my permission, stamping his boots with the air of a man entering his own abode after a long day.

“Professor Wilde,” he said, holding out a hand. It was a large hand, for he was a large man, both in height and around the shoulders and midsection. His hair was a shaggy black, his face square with a broken nose that came together in a way that was surprisingly becoming, though in an entirely uninviting way. “Brought your dog, I see. Fine beast.”

“Well, who else would I be?” my host replied. I wasn’t sure if this was meant to be unfriendly or if the baseline of his demeanour was mild hostility. I should mention here that I am terrible at reading people, a failing that has landed me in my fair share of inconveniences. Bambleby would have known exactly what to make of this bear of a man, would probably already have him laughing at some charmingly self-­effacing joke.

Bloody Bambleby, I thought. I haven’t much of a sense of humour myself, something I dearly wish I could call upon in such situations.

“Quite a journey you’ve had,” Egilson said, staring at me disconcertingly. “All the way from London. Get seasick?”

“Cambridge, actually. The ship was quite—­”

“Villagers stared as you came up the road, I bet? ‘Who’s that little mouse of a thing, coming up the road?’ they were thinking. ‘She can’t be that fancy scholar we’ve been hearing about, come all the way from London. Looks like she’d never survive the journey.’ ”

Heather Fawcett is the author of a number of middle grade novels, including Ember and the Ice Dragons and The Grace of Wild Things, as well as the young adult series Even the Darkest Stars. She has a master’s degree in English literature and a bachelor's in archaeology. She lives on Vancouver Island.

Book One of the Emily Wilde Series 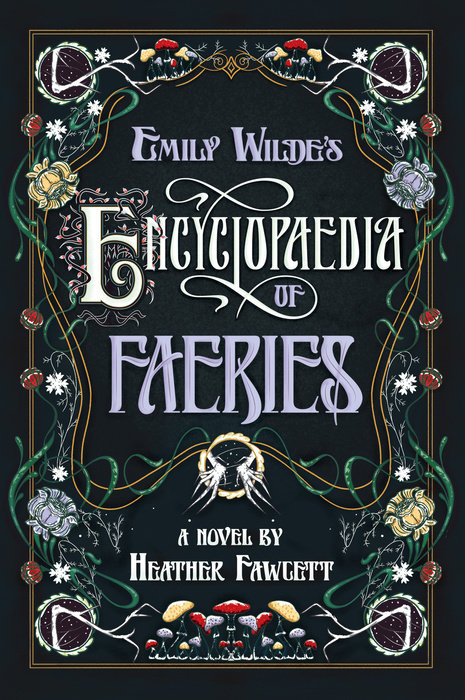